Cytomegalovirus infection after transplant has been dramatically reduced in the modern era with improved understanding of immunosuppression and perioperative transplant care. However, cytomegalovirus syndrome with or without tissue invasive disease can still lead to significant morbidity and mortality. Several organs can be involved:
most commonly, the gastrointestinal tract, liver, pancreas, lung, and the transplanted renal allograft. Postoperative cytomegalovirus colitis after renal transplant is well recognized and described, with symptoms including abdominal pain, nausea, and diarrhea. Biochemistry can demonstrate pancytopenia with a leukopenia with or without histopathology confirmation. A high index of suspicion is required for a timely diagnosis. This is the first published case report of a patient with cytomegalovirus tissue invasion presenting with a perianal fistula and abscess formation. The diagnosis and management of this case with a literature review is discussed.

Kidney transplant has been demonstrated to have a significant effect on quality and quantity of life for patients with end-stage renal failure. Despite the benefits, the Achilles heel of transplant medicine remains the morbidity associated with immunosup-pression. Cytomegalovirus (CMV) colitis, from activation of latent CMV infection, is a well-recognized complication associated with immunosuppression and secondary morbidity for kidney transplant recipients.1 Gastrointestinal (GI) involvement with CMV-related morbidity has been well described. Cutaneous tissue manifestation has been very infrequently described, with sparse case reports of perineal, penile, tongue, and scrotal ulceration.2,3 We describe an unusual case of a patient with CMV colitis presenting with perianal fistula formation. A subsequent review of the literature on this unusual cutaneous presentation of CMV colitis is also presented.

A 53-year-old male patient with end-stage kidney disease secondary to hypertensive disease received a renal transplant from a deceased donor (brain death). Peritoneal dialysis was the renal replacement therapy prior to transplant. His past medical history included obstructive sleep apnea, monoclonal gammopathy of unknown significance, prior laparoscopic peritoneal dialysis, and catheter and laparoscopic cholecystectomy (for history of gallstone pancreatitis). The recipient was positive for CMV immunoglobulin G (IgG) and negative for Epstein-Barr virus IgG. The donor/recipient (D/R) match profile was human leukocyte antigen mismatch 6/6, CMV D+/R+, Epstein-Barr virus D+/R-. At time of transplant, the patient was CMV IgG positive and CMV IgM negative on serology. The patient underwent low-risk immunosuppression induction with basiliximab and began a triple maintenance protocol with tacrolimus, mycophenolate mofetil, and prednisone. There were concerns regarding persistent idiopathic leukopenia, so the patient did not receive CMV prophylaxis.

The patient underwent an uncomplicated kidney transplant via a modified Rutherford Morison incision in the right iliac fossa and concurrent removal of the peritoneal dialysis catheter. He had delayed graft function and required hemodialysis via a temporary femoral venous catheter (Vascath) until postoperative day 8. His postoperative stay was complicated by Clostridioides difficile colitis, which was treated by oral vancomycin (1 g twice daily for 14 days). He also underwent 2 courses of pulse corticosteroid treatment for treatment of biopsy-proven borderline acute rejection on postoperative day 5 and day 20.

He developed new perianal pain on postoperative day 34 with ongoing associated diarrhea. Bedside examination revealed extensive perianal excoriation. Magnetic resonance imaging of his pelvis revealed a possible intersphincteric abscess. He underwent formal examination under anesthesia, and a perianal fistula was identified, arising 2 cm proximal to the anal verge, and this was laid open. Hematoxylin and eosin staining of fistula tract tissue revealed evidence of chronic active inflammation and CMV inclusion bodies suggestive of CMV colitis (Figure 1). This diagnosis was confirmed by immunohistochemical staining with CMV protein monoclonal antibody (Figure 2). At this point, the patient was CMV IgG positive and CMV IgM positive on serology, indicating CMV reactivation, and his plasma CMV viral load was 75 000 copies/mL. His biochemistry at the time of diagnosis demonstrated normal electrolytes with anemia (hemoglobin, 107 g/L), thrombocytopenia (111 × 109 platelets/L), and a white blood cell count of 8.2 × 109 cells/L. Postoperatively he underwent commencement of intravenous ganciclovir (400 mg twice daily) with immediate resolution of perianal pain. His perianal wound site continued to heal and improve, and reduction in viral load continued to improve. His plasma viral load and white blood cell count during his treatment are shown in Table 1. After 20 days of intravenous ganciclovir therapy, he was transitioned to oral valganciclovir (900 mg twice daily) due to down-trending CMV viral load.

Due to his protracted stay, the patient developed significant frailty and immobility. He continues to receive ongoing inpatient rehabilitation.

Cytomegalovirus, also known as Human herpesvirus 5, is a common DNA virus from the Herpesviridae family, affecting over 50% of adults in developed countries.4 Viral reactivation of CMV is a well-known complication of immunosuppression following kidney transplant and has clinical manifestations similar to primary CMV infection in this population.1 Prophylactic antiviral therapy and preemptive CMV treatment are common practice and have significantly reduced CMV incidence; however, CMV infection remains common in these groups, and a high index of suspicion should be maintained to facilitate early identification.5 In the current era with prophylaxis, CMV infection affects 8% to 32% of kidney transplant recipients, with peak incidence occurring at the postoperative period from day 30 to day 90.6 Without prophylaxis, this rate is up to 70%.6 Its presentation is variable, with involvement of the GI tract and ocular system being the most frequent and with abdominal pain being the most common presenting symptom.4 Less frequent cases have been reported with involvement of the respiratory, hepatic, central nervous, and cardiac systems.4 Cutaneous involvement has also been rarely reported, involving perineal and oral mucosal lining.

Involvement of the upper GI tract is most frequent. Symptoms include abdominal pain, nausea, and vomiting.4 Lower GI tract involvement and symptoms are less common and can include diarrhea and hematochezia. The strongest identifiable independent risk factor is serological mismatch between donor and recipient, with the CMV D+/R- profile being highest risk.6 In addition, the use of mechanistic target of rapamycin immunosup-pression or high-risk induction (with polyclonal antibodies such as antithymocyte globulin) is an additional risk factor.6 This patient had CMV IgG positive serology results that indicated a moderate risk of CMV reactivation; however, only standard immunosuppression was used. His risk was elevated by several other factors, including inability to commence CMV prophylaxis in the initial postoperative period, several rounds of pulse corticosteroid treatment, and deconditioning with prolonged hospital stay.

Cases of CMV viremia with concurrent cutaneous tissue invasion have been sparsely reported. Cytomegalovirus colitis and active inflammation may have led to development of perianal fistula as a cutaneous manifestation of the disease. Conversely, CMV viremia may have secondarily infected the perianal/rectal tissue, or the preexisting excoriated perianal skin (from recurrent diarrhea in the context of recent C. difficile colitis), leading to cutaneous involvement. It is interesting to note that routine histopathological assessment of perianal fistulas is not common, and thus CMV involvement may be underreported in both immunocompromised and immunocompetent hosts.

The diagnosis of CMV-related pathology relies on a combination of clinical, serological, and histopat-hological examinations. Despite the broad array of signs and symptoms, initial clues that may manifest serologically include leukopenia, thrombocytopenia, and/or derangement of liver function tests.1 The presence of idiopathic leukopenia may have contributed to CMV reactivation early in this patient’s clinical course.

Several modalities exist to diagnose CMV reactivation and related GI pathology, including tissue or serum CMV polymerase chain reaction (PCR) quantification of CMV DNA, CMV culture, and endoscopy with histology assessment.1 Histological assessment of tissue with hematoxylin and eosin and immunofluorescence is considered the gold standard to establish CMV diagnosis in tissue biopsies. The use of serological PCR CMV DNA quantification can assist this diagnosis and guide treatment efficacy but relies on the presence of viremia in the patient.

There have been rare, reported cases of cutaneous CMV in renal transplant patients, as described in Table 2. To our knowledge, this is the first reported case of a perianal fistula with histopathology-confirmed CMV diagnosis in a transplant recipient. Some examples include Lee and colleagues, who described a case of cutaneous CMV infection presenting as perianal ulcers 3 weeks after deceased donor renal transplant in a 68-year-old female recipient.8 Further cutaneous manifestations of CMV in a renal transplant recipient were described by Neumann and colleagues. They reported the case of a 68-year-old man who developed ulcers on the tongue and penis 2 months after transplant. Ulcer biopsy revealed CMV inclusion bodies, and the patient’s PCR results were positive for CMV viremia.2 Bhandari and colleagues have described another fatal complication of cutaneous CMV in a 46-year-old man who had received a renal transplant 3 years previous to presentation. He presented with a cutaneous growth on his medial ankle, which showed CMV inclusion bodies on histopathology. This patient was treated with ganciclovir; however, he developed severe sepsis secondary to a superimposed bacterial infection.9

In summary, cutaneous manifestations of CMV have been reported rarely in transplant patients. Fistula formation has been previously described as a complication of CMV infection in immunocom-promised patients, however, not in the transplant population. We describe the first case of a perianal fistula with confirmed CMV inclusion bodies in a postoperative renal transplant patient. This highlights that a high index of suspicion for CMV pathology should be considered in this patient population for timely diagnosis and appropriate treatment, regardless of confounding diagnoses such as recent C. difficile infection. Furthermore, this report demonstrates the value of CMV prophylaxis in this vulnerable group, which is especially important given the high morbidity and mortality associated with CMV infection in the immuno-compromised population and the specific management involved.

From the 1Transplant Surgery Department, Westmead Hospital, Westmead; the 2Sydney Medical School, Sydney University, Sydney; the 3Department of Tissue Pathology and Diagnostic Oncology, Westmead Hospital, Westmead; and the 4Surgery Department, Royal Prince Alfred Hospital, Camperdown, New South Wales, Australia
Acknowledgements: The authors have not received any funding or grants in support of the presented research or for the preparation of this work and have no declarations of potential conflicts of interest.
Corresponding author: Animesh A. Singla, 77 Donovan Avenue, Maroubra, NSW, 2035 Australia
Phone: +61 497 453 757
E-mail: animesh.singla@gmail.com 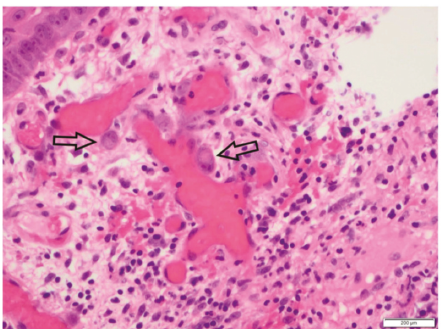 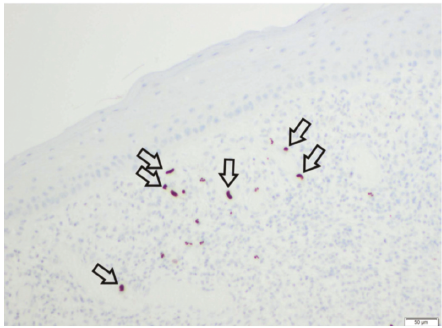