Introduction
Cystinosis was first described in 1903 by the Swiss biochemist Emil Abderhalden as a familial cystine accumulation disease.1 It is a rare autosomal recessive lysosomal storage disorder with an incidence of 1 per 100 000 to 200 000 live births.2 It is the most frequent cause of the inherited renal Fanconi syndrome and is the most potentially treatable. However, if left untreated, renal function rapidly deteriorates to end-stage kidney disease (ESKD) by the end of the first decade of life.3

Cystinosis is a clinically heterogeneous disorder divided into 3 allelic forms based on the age of occurrence and the extent of kidney disease. The early occurring and most common form of cystinosis is the infantile form (nephropathic cystinosis). It is characterized by severe proximal tubular dysfunction. The juvenile form is the intermediate form in both its severity and age of occurrence of cystinosis. The ocular form (adult form) is often asymptomatic.2 Mutations in the CTNS (cystinosin) gene result in defective transport and accumulation of cystine, leading to multiorgan and neurological damage.4

Genetic analysis of the CTNS gene is recommended to confirm each new diagnosis and is critical for genetic counseling. Prenatal diagnosis is preferably accomplished by DNA sequencing of chorionic villus or amniocentesis samples when the mutation in an index case is known.5

Two significant milestones in cystinosis management, cystine-depleting therapy with cysteamine and renal allograft transplantation, have had a considerable impact on the natural history and prognosis of patients with cystinosis.3 Rocca and Cherqui proposed another modality for management using hematopoietic stem and progenitor cell transplantation for several lysosomal storage disorders. This modality is based on the premise that their progeny will integrate into the affected tissues and secrete the functional missing enzyme, which will be recaptured by the surrounding deficient cells and restore its physiological activity. However, in the case of cystinosis, the defective protein is a transmembrane lysosomal protein (cystinosin). Thus, cystinosin cannot be secreted; however, the investigators showed that hematopoietic stem and progenitor cell transplant could rescue disease phenotype in a mouse model of cystinosis.6

Renal transplant in patients with cystinosis is widely accepted, with no risk of disease recurrence as the genetic defect does not get transferred with the allograft. Cysteamine treatment is usually resumed after kidney transplant, but the delay in restarting treatment should be limited to a few days, to be administered along with first meals. Interactions with immunosuppressive medications have not been well studied. Therefore, it might be desirable to perform pharmacokinetics and area under the curve measurements of mycophenolate, cyclosporine, and tacrolimus in each patient when appropriate. Prospective kidney transplant recipients should be informed of the risk of triggering diabetes with prednisone and tacrolimus.7 Renal transplant is more successful in cystinosis than in other causes of renal failure in children. This may be related to diminished immune responsiveness induced by intracellular cystine accumulation.8 Cystine-induced tubular dysfunction does not recur on the graft, although cystine does accumulate in the interstitial cells.9

In the present study, we have described our single-center experience of the long-term outcomes of kidney transplant in patients with cystinosis.

Materials and Methods
Patients eligible for enrollment in this study were pediatric renal transplant recipients. We had selected this group of patients after screening all renal transplant recipients who were followed up in the Hamed Al-Essa Organ Transplant Center of Kuwait. Patients with cystinosis as an original kidney disease comprised group 1 (n = 17), whereas those with other different causes of kidney failure served as matched control (group 2, n = 126). We compared demographic data in both groups and reported posttransplant complications in addition to graft and patient outcomes.

Follow-up
All patients were followed up in the Hamed Al-Essa Organ Transplant Center clinics at least every 2 months or according to the local follow-up protocol. Our immunosuppression protocol consists of 5 doses of antithymocyte globulin (Sanofi US) for high-risk patients (such as those who had retransplants, prior pregnancy, blood transfusion, HLA antibody positivity, and/or more than 4 HLA mismatches) or 2 doses of interleukin 2 receptor blocker (basiliximab; Novartis, Inc.) for low-risk patients. Maintenance therapy consists of prednisolone, mycophenolate mofetil, and a calcineurin inhibitor. Patients underwent a gradual decrease of the dose of calcineurin inhibitor to the lowest dosage by the end of year 1 posttransplant, guided by a 12-hour trough level. Protocol for cyclosporine levels was to maintain between 200 and 250 ng/mL during month 1, then between 150 and 200 ng/mL for several months, then between 125 and 150 ng/mL for 2 months, and then from 75 to 125 ng/mL until the end of year 1 posttransplant. Similarly, the protocol for tacrolimus trough levels was to maintain patients between 8 and 10 ng/mL during the first 3 months and then between 5 and 8 ng/mL after that. We used a sirolimus-based regimen as maintenance immunosuppression among rejection-free patients with low immunological risk starting after 3 months posttransplant.

We treated acute T-cell-mediated rejection with intra-venous methylprednisolone sodium succinate (Solumedrol; 1 g daily for 3 days) and/or thymoglobulin (1 mg/kg for 7-10 days) for steroid-resistant rejection. Antibody-mediated rejection was treated with plasma exchange, intravenous immunoglobulin (2 g/kg), and rituximab. Patients who were targeted to receive thymoglobulin as antirejection were managed by secondary prophylaxis for 1 month. Patients were monitored daily during the hospital stay and then at each outpatient visit to analyze complete blood picture, serum creatinine, creatinine clearance, liver function (bilirubin, liver enzyme, and albumin level tests), and drug levels.

Results
As shown in Table 1, most patients with cystinosis in our study were Kuwaiti (64.7%), males (52.9%), and in their second decade of life. Mean age in group 1 was 12.4 ± 4.1 years versus 14 ± 3.1 years in group 2. Both groups were comparable regarding the type of dialysis, type of donor, blood group, and pretransplant comorbidities, especially diabetes, hypertension, latent tuberculosis, hepatitis C, cytomegalovirus serology, and urologic problems (P > .05). Group 1 patients (with cystinosis) received significantly more potent induction therapy (P < .05), but both groups were maintained on comparable immunosuppressive regimens (mostly tacrolimus based) (P > .05). In both groups, most grafts displayed immediate graft function, with comparable results between groups (P = .59) (Table 2).

The number of patients with primary graft function among group 1 (with cystinosis) was significantly higher than the number shown in group 2 (P = .024), and this was reflected by relatively lower baseline creatinine level, although not reaching significance (Table 3, P> .05). In addition, patients in group 1 received significantly less potent induction therapy (P = .002).

We did not find any significant differences between the 2 groups with regard to posttransplant complications, especially posttransplant diabetes, cytomegalovirus, viremia, or BK nephropathy (P > .05; Table 2).

Renal transplant is the optimum method for managing patients with ESKD, which improves both quality of life and survival rates compared with other renal replacement therapy modalities. This treatment method is also applied to patients who develop ESKD secondary to cystinosis. Before 1960, every person born with cystinosis died in infancy as a result of renal Fanconi syndrome or in the first decade of life as a result of renal failure. In the late 1960s, renal transplant for children with cystinosis dramatically increased the longevity of these patients. However, long-term cystine accumulation can continue to damage nonrenal tissues, affecting patient survival after transplant.10

The clinical course of cystinosis was revolutionized in 1994 when the US Food and Drug Administration approved cysteamine to treat cystinosis.11 Cysteamine depletes nearly 90% of intracellular cystine by converting it into a water-soluble metabolite, cysteine, exiting the lysosomes without the defective transporter.12 The use of oral cysteamine has markedly improved outcomes of those with cystinosis with its potential fatal extrarenal consequences posttransplant. The drug’s plasma levels reach their maximum at 1 hour after ingestion of cysteamine, whereas white blood cell cystine levels are at their minimum, followed by a gradual decline in plasma cysteamine levels and a gradual increase of white blood cell cystine levels. Both levels reach their original values around 6 hours after ingestion. This highlights the importance of a dosing regimen in which cysteamine is administered every 6 hours; ideally, it should also be administered during the night. Justifiably, such a dosing scheme can cause a significant burden in terms of compliance with cysteamine therapy.13 A novel extended-release, twice-daily formulation of cysteamine is now available, which has greatly overcome the problem of compliance. However, high direct treatment costs for this new option may threaten its comprehensive availability to patients in need.

Patients with cystinosis received significantly more potent induction therapy than the control group without cystinosis with a higher incidence of primary graft function. In addition, despite no statistically significant differences at most time points, graft function reflected lower baseline serum creatinine with a lower incidence of rejection episodes. These results are similar to those obtained by other investigators.14-16

Extrarenal cystinosis-related complications can include severe growth retardation, which is a clinical hallmark in children with nephropathic cystinosis, despite successful transplant and early initiation of cysteamine therapy. We found a statistically significant lower mean height in patients with cystinosis compared with their matched control. The same results were stated by Zimakas and colleagues.17 They reported that linear growth in patients with cystinosis after transplant was inferior to a matched group of transplant recipients without cystinosis. Several factors contribute to this growth failure. First, all children with cystinosis already have severe growth retardation before transplant. Thus, these loss of gains during earlier phases of the disease may not be regained after transplant. Second, reducing glomerular filtration rate after transplant may not allow the catch-up growth required to attain average age-matched height. Third, steroid-based immunosuppressive therapy can also impair growth. Furthermore, the claimed thyroid dysfunction can interfere with development in children with cystinosis.18

The incidence of other posttransplant complications like cytomegalovirus viremia, BK viremia, and posttransplant diabetes were comparable in both of our study groups. These results have been previously confirmed.16

Conclusions
Under standard immunosuppression therapy, renal transplant and cysteamine therapy are safe with good long-term outcomes in patients with cystinosis. Because cystinosis is a systemic multiorgan dysfunction disorder, transplant in these patients requires a collaborative multidisciplinary effort with multilevel tasks to evaluate and treat those patients properly. Further research studies with greater numbers of patients and longer-term follow-up are needed to better understand the nature of this multiorgan-affected genetic diseases and to discover the best treatment options.

From the 1Nephrology Department, Hamed Al-Essa Organ Transplant Center, Ibn Sina Hospital, Sabah Area, Kuwait; and the 2Department of Dialysis and Transplantation, The Urology and Nephrology Center, Mansoura University, Egypt
Acknowledgements: The authors have not received any funding or grants in support of the presented research or for the preparation of this work and have no declarations of potential conflicts of interest.
Corresponding author and current address: Osama A. Gheith, Urology and Nephrology Center, Mansoura University, Egypt; working in Hamed Alessa Organ transplant center, Kuwait
Phone: +965 66641967
E-mail: ogheith@yahoo.com

Table 1. Demographics of the Study Population 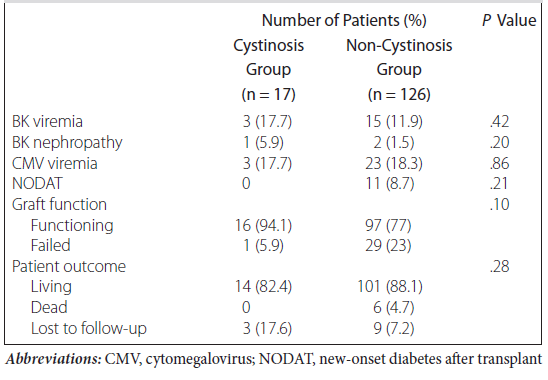 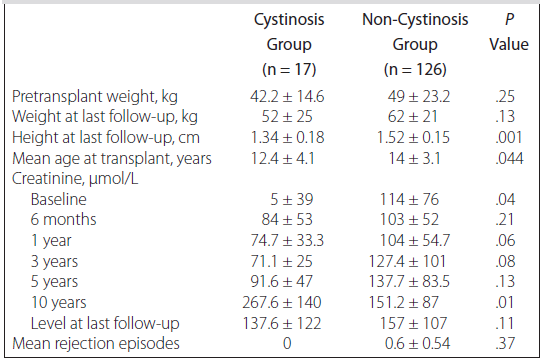