Objectives: Calcineurin inhibitors are the cornerstone of immunosuppression following solid-organ transplant. However, hyperkalemia may occur by multiple mechanisms affecting potassium in the distal tubule. Hyperkalemia is commonly observed in renal transplant recipients, and it is dose-dependent. Here, we evaluated the impact of fludrocortisone in the management of calcineurin inhibitor-induced hyperkalemia after renal transplant.
Materials and Methods: We evaluated newly transplanted patients who developed hyperkalemia or those with hyperkalemia who attended our outpatient renal transplant clinic (Hamed Al-Essa Organ Transplant Center, Kuwait). Clinical and laboratory parameters were collected before starting fludrocortisone (baseline values) and then at 1, 2, 4, and 8 weeks. Drug history was assessed, with any drugs that could induce hyperkalemia being discontinued (such as spironolactone); otherwise, essential drugs like prophylactic agents (sulfamethoxazole-trimethoprim) were maintained. Oral anti-hyperkalemic doses (bicarbonate, resonium calcium, fludrocortisone) were noted.
Results: Our study included 29 patients; most were men (aged 45.8 ± 15 years). Body weight did not significantly change after introduction of fludrocortisone (79.53 ± 24.31, 79.82 ± 23.85, 80.62 ± 24.24, 77.03 ± 20.7, and 79.21 ± 27.93 kg at baseline and at postdose week 1, 2, 4, and 8, respectively). Systolic and diastolic blood pressure levels were also similar at baseline versus postdose. Steroid doses (prednisolone) were significantly reduced over 1 month (15.7 ± 12.4, 14.1 ± 10.19, 12.6 ± 8.7, 9.5 ± 5.2, and 9.5 ± 5.2 mg/day). Serum potassium levels significantly improved (5.18 ± 0.58, 4.9 ± 0.49, 4.8 ± 0.54, 4.8 ± 0.65, and 4.4 ± 0.72 mmol/L). Serum creatinine levels significantly improved by postdose week 8 (129.28 ± 48.9, 130.92 ± 52.2, 127.66 ± 50.9, 121.42 ± 41.7, and 124.1 ± 51.27 μmol/L). Serum bicarbonate levels remained similar.
Conclusions: Fludrocortisone was a safe and effective option in management of calcineurin inhibitor-induced hyperkalemia among renal transplant recipients.

Kidney transplant (KT) is an established treatment option for patients with end-stage renal disease. Electrolyte imbalances are a common consequence of end-stage renal disease that often normalize after successful KT. However, electrolyte imbalances, including hyperkalemia, may persist after KT for various reasons, including tubular dysfunction caused by acute and/or chronic rejection, direct drug-induced tubular toxicity, and drug-induced enhanced sodium delivery in the distal nephron.1

Calcineurin inhibitors (CNIs) such as tacrolimus and cyclosporine are cornerstones of immunosuppressive maintenance medications. They can, however, induce hyperkalemia by various mechanisms, with tacrolimus posing a significantly higher risk than cyclosporine.2 These mechanisms include impaired function of the sodium-chloride cotransporter in the distal convoluted tubule as well as downregulation of mineralocorticoid expression via suppression of the renin-angiotensin-aldosterone system to hyperkalemic type 4 renal tubular acidosis (RTA).3 In addition, supratherapeutic CNI concentrations can result in afferent renal arteriolar vasoconstriction and acute kidney injury, resulting in impaired potassium elimination.4

Calcineurin inhibitor-related hyperkalemic RTA is the consequence of a tubular defect in potassium secretion induced by 2 major mechanisms: dose-dependent inhibition of Na+/K+-ATPase activity5 and aldosterone resistance secondary to downregulation of mineralocorticoid receptor expression.6 However, the metabolic acidosis is caused by hyperkalemia-induced impairment of ammonium ion excretion.7

Calcineurin inhibitors exert their immunosuppressive effects by inhibiting the nuclear factor of activated T cells (NFAT) and reducing interleukin 2 transcription and T-cell activation.8 Blocking NFAT-mediated gene transcription in other cell types causes many of the adverse effects associated with this drug class. The most common form of CNI nephrotoxicity develops shortly after drug initiation. Activation of the renin-angiotensin system with reductions in nitric oxide, prostaglandin E2, and prostacyclin leads to vasoconstriction of the afferent arteriole. The effect is a dose-dependent and reversible elevation in blood pressure and reduction in glomerular filtration rate.9 Chronic NFAT downregulation leads to hyalinosis of the renal vasculature, tubular atrophy and fibrosis, and glomerular thickening with either segmental or diffuse sclerosis. These changes were shown to occur in the majority of patients on long-term CNI after heart transplant.10

Organ transplantation is widely used as an effective treatment of end-stage diseases. To maintain allograft function, patients need to have long-term application of immunosuppressants, which rely mainly on CNI-based regimens, including cyclosporine A and tacrolimus. Two major types of acute CNI nephrotoxicity have been recognized since its Þrst use in organ transplantation in 1978.11

In several case reports, fludrocortisone, a corticosteroid with high mineralocorticoid activity, was shown to have a beneficial effect in managing CNI-associated hyperkalemia.12,13 Lin and colleagues14 described 4 solid-organ transplant recipients who developed CNI-induced hyperkalemic RTA (1 patient who received cyclosporine and 3 who received tacrolimus). Through CNI dose reduction or addition of low-dose þudrocortisone or a temporarily switch to sirolimus along with pharmacologic treatment (such as sodium bicarbonate, loop diuretics, and resonium calcium), hyperkalemic RTA was normalized. In this study, we evaluated the effects of fludrocortisone in the management of CNI-induced hyperkalemia among recent adult KT recipients.

We evaluated newly transplanted patients who developed hyperkalemia and newly transplanted recipients with hyperkalemia who attended our outpatient renal transplant clinic in the Hamed Al-Essa Organ Transplant Center of Kuwait. Patients were evaluated clinically and with laboratory investigations during their follow-up visits. All patients were assessed regarding drug history, with special stress on possible drugs inducing hyperkalemia that were discontinued (such as spironolactone); otherwise, essential drugs like prophylactic agents (sulfamethoxazole-trimethoprim) were maintained. Doses of oral anti-hyperkalemic agents (bicarbonate, resonium calcium, and fludrocortisone) were noted. Patients who received fludrocortisone started with a dose of 0.1 mg/day, with the dose tailored based on hyperkalemia response. Patients were followed for 8 weeks, with focus on the following parameters: blood vital signs, weight and degree of edema in lower limbs, kidney function tests (especially serum creatinine), bicarbonate level, complete blood picture, and serum potassium level. All parameters were checked at the start of the study (baseline) and at 1, 2, 4, and 8 weeks after start of fludrocortisone.

Our immunosuppression protocol consists of 5 doses of antithymocyte globulin (Sanofi US) for high-risk patients (retransplant recipients and patients with prior pregnancy, blood transfusion, HLA-antibody positive, and or more than 4 HLA mismatches) or 2 doses of an interleukin 2 receptor blocker (basiliximab; Novartis) for low-risk patients. Maintenance therapy consists of prednisolone, mycophenolate mofetil, and a CNI. Patients had gradual reduction of CNI dose, with the lowest dose level by the end of year 1 posttransplant, guided by a 12-hour trough level. Cyclosporine level was maintained between 200 and 250 ng/mL during the first month, then between 150 and 200 ng/mL for several months, then between 125 and 150 ng/mL for 2 months, and then at 75 to 125 ng/mL until the end of year 1 posttransplant. Similarly, tacrolimus trough levels were maintained at 8 to 10 ng/mL during months 1 to 3 and then at 5 to 8 ng/mL after that.

Statistical analyses
We used the Statistical Package for the Social Sciences version 25.0 (SPSS) for statistical analyses. Qualitative variables are shown as numbers and percentages, and quantitative variables are presented as means ± standard deviation and median. We used t tests to compare means and standard deviations of the studied groups. Categorical variables were compared using the chi-square test. P < .05 was considered significant.

Our study included 29 KT recipients who were within their first 6 months posttransplant. All had posttransplant hyperkalemia and metabolic acidosis. Table 1 displays the demographics of the study patients. Most patients were Kuwaiti (86.2%), and most were men (69%) in their fifth decade of life. Diabetic nephropathy (41.4%) and autosomal dominant polycystic kidney disease (10.3%) were the most commonly identified original kidney disease. Most patients had pretransplant comorbidities, including hypertension (72.4%), hyperlipidemia (69%), and diabetes (44.8%).

Hyperkalemic RTA is characterized by non-anion gap metabolic acidosis, hyperchloremia, hyperkalemia, and acidic urine (pH < 55).7 Drugs, such as adrenergic agonists, beta-adrenergic antagonists, trimethoprim, and CNIs, are major causes of acquired hyperkalemic RTA.7,15 Some of these agents are inevitably used after KT. Type IV RTA is a rare form of acute nephrotoxicity associated with CNI use. This phenomenon has only been described in rare cases after liver transplant.14-17

Although some patients cannot tolerate anti-hyperkalemic measures either because of the intravenous route of administration or because of their possible side effects, fludrocortisone has shown promising effects in the management of CNI-induced hyperkalemia.18 In our study, we found that potassium levels significantly improved after the introduction of fludrocortisone. This finding was matched by that reported by Ali and colleagues19 in their study on 47 kidney recipients, which showed significant improvement of serum potassium levels after introduction of fludrocortisone. They concluded that fludrocortisone appears to be safe and effective for tubulopathies in children posttransplant.19 Moreover, another study showed that fludrocortisone effectively decreased tacrolimus-induced hyperkalemia in liver transplant recipients.18

In their 2011 publication, Dick and colleagues reported steady, stable serum bicarbonate concentrations over their 2-week study period with no significant change from the baseline values.18 However, we found a significant increase in the level of bicarbonate after 8 weeks of follow-up. The difference could be due to the relatively long duration of management in our patients.

Fludrocortisone, a mineralocorticoid that greatly increases sodium retention and urinary potassium excretion,18 at a dose of 0.2 mg daily worked well. Nevertheless, Dick and colleagues18 added that, once its dosage was reduced to 0.05 mg daily, hyperkalemia relapsed. In addition, the drug has several possible adverse effects, including edema, osteoporosis, hyperglycemia. In our study, a low dose of 0.1 mg daily was safe, well-tolerated, and effective during the whole period of the study.

Fludrocortisone was a safe, tolerable, and effective option in the management of CNI-induced hyperkalemia, especially among recent adult renal transplant recipients.

From the 1Nephrology Department, Hamed Al-Essa Organ Transplant Center, Sabah Area, Kuwait; and the 2Nephrology and Transplantation Unit, Urology and Nephrology Center, Mansoura University, Mansoura, Egypt
Acknowledgements: The authors have not received any funding or grants in support of the presented research or for the preparation of this work and have no declarations of potential conflicts of interest.
Corresponding author and current address: Osama Ashry Gheith, Urology and Nephrology Center, Mansoura University, Egypt; working in Hamed Alessa Organ Transplant Center, Kuwait
Phone: +965 66641967
E-mail: ogheith@yahoo.com

Table 2. Clinical and Laboratory Evaluations Before and After Fludrocortisone Introduction 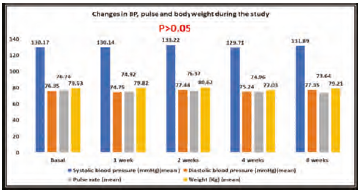 Figure 1. Changes in Blood Pressure, Pulse, and Body Weight During the Study 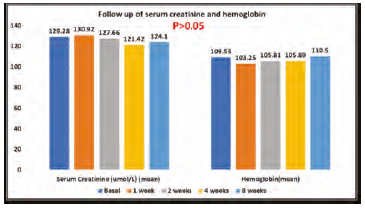 Figure 2. Changes in Serum Creatinine and Hemoglobin During the Study 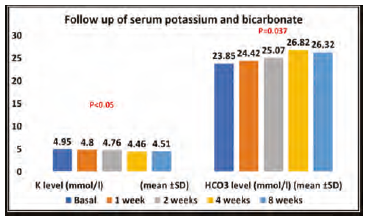 Figure 3. Changes in Serum Potassium and Bicarbonate During the Study