Severe anemia requiring multiple blood transfusions in the posttransplant period can trigger rejection. The evaluation of anemia among transplant recipients is a challenging task. Awareness should be continued for tacrolimus to manage pure red cell aplasia, but further evidence is needed to prove whether tacrolimus is a real cause of posttransplant anemia. Our case patient, a 66-year-old male patient with end-stage renal disease due to diabetic nephropathy, underwent a preemptive living donor renal transplant in September 2018. He had received a coronary artery bypass graft with transcatheter aortic valve implantation 3 years before renal transplant. Initially, he was maintained on prednisolone, mycophenolate mofetil, and tacrolimus after basiliximab induction. One month later, he presented with low cardiac output symptoms. His complete blood count showed normocytic normochromic anemia with reticulocytopenia (his hemoglobin level dropped from 112 to 69 g/L), which necessitated regular blood transfusions. His iron profile, serum folate, and vitamin B12 were within normal limits, and he had negative hemolytic and autoimmune screening tests. A bone marrow biopsy revealed acquired pure red cell aplasia, which was most likely drug induced as viral profiles were negative for parvovirus B19, cytomegalovirus, and Epstein-Barr virus. The patient was managed by discontinuing mycophenolate mofetil, and the steroid dose was increased up to 20 mg/day but without improvement. With tacrolimus then considered, 3 weeks after presentation, we replaced tacrolimus with cyclosporine. Complete blood count follow-up showed improvement without any need for further blood transfusions. After 1 month of cyclosporine maintenance, mycophenolate mofetil was resumed with a steady increase of hemoglobin up to 150 g/L and serum creatinine of 122 μmol/L. Pure red cell aplasia is a rare disorder among renal transplant recipients, which could be induced by maintenance tacrolimus therapy.

Acquired pure red cell aplasia (PRCA) is a rare, generally chronic condition of profound anemia characterized by a severe reduction in the number of reticulocytes in the peripheral blood and the near absence of erythroid precursors in the bone marrow. The other cell lineages are present and appear morphologically normal. Acquired pure red cell aplasia in adults is most often idiopathic, although several underlying causes can exist, mostly drug-induced.1

The hematological toxicity of tacrolimus has been rarely stated. In a report of 2 pediatric recipients of liver transplant with anemia, both were treated with tacrolimus for 8 and 47 months, respectively, and then developed PRCA confirmed by bone marrow biopsy. The children recovered rapidly on withdrawal of tacrolimus. When the clinical profiles of these children were compared with the only other patient report in the literature with PRCA due to tacrolimus, all 3 patients had similar hematological findings.2

Anemia is common after renal transplant and has been reported in up to 40% of renal transplant recipients. It is commonly due to drugs and infections.3 In comparison, posttransplant anemia is usually due to graft dysfunction and drugs such as mycophenolate and cotrimoxazole, whereas tacrolimus is an uncommon cause. Severe anemia requiring multiple blood transfusions in the posttransplant period may also create a risk for rejection. Therefore, timely evaluation and management of anemia in these patients are crucially needed.4,5

Case Report
Our patient was a 66-year-old-male Kuwaiti patient with end-stage renal disease secondary to diabetic nephropathy. He has had long-term diabetes mellitus and hypertension since 1992, which were controlled by insulin and calcium channel blockers plus beta-blocker. He had a history of ischemic heart disease and received percutaneous coronary intervention twice in June and December 2011. Three years before transplant, he received a coronary artery bypass graft with transcutaneous aortic valve implantation. In September 2018, he received a preemptive living unrelated donor renal transplant in China. He received his allograft from a haploidentical donor with the same blood group. He received basiliximab as an induction and then was maintained on prednisolone 5 mg per day, mycophenolate mofetil (MMF; 750 mg twice per day), and tacrolimus 3 mg twice per day.

The patient had early postoperative wound dehiscence managed by antibiotics, dressing, and secondary sutures in October 2018. His diabetes was controlled by insulin, and his blood pressure was controlled by amlodipine 10 mg/day and metoprolol 50 mg twice per day. He was kept on baby aspirin 81 mg/day. In accordance with our center’s protocol, the patient was kept on prophylaxis for cytomegalovirus (CMV; with valganciclovir) and Pneumocystis jirovecii pneumonia (with sulfamethoxazole).

The patient had stable renal graft function and was doing fine until 1 month after transplant, when he presented with low cardiac output symptoms and described easy fatigability. On examination, he was hemodynamically stable, with blood pressure of 130/82 mm Hg, regular pulse rate of 76 beats/min, afebrile, and oxygen saturation of 98% in room air. He denied any orifical bleeding or drug use other than those prescribed. He had pale sclera without jaundice and no lower limb edema. An abdominal examination was negative for organomegaly or ascites, but he had a body mass index showing obesity (32.6 kg/m2). Other systems were examined and showed unremarkable findings.

Despite discontinuation of MMF for 1 month, anemia persisted, and the patient was still in need of multiple blood transfusions over 4 weeks. Our review of the literature showed several case reports of acquired PRCA as a result of tacrolimus.9-11 Therefore, we replaced tacrolimus with cyclosporine (75 mg twice per day) with an acceptable drug level of around 100 ng/dL. Subsequent laboratory results showed that his hemoglobin steadily increased (Figure 2) without any blood transfusions.

The patient was maintained on prednisolone and cyclosporine for 8 weeks. We then resumed administration of MMF at 500 mg twice per day, which was subsequently increased to 750 mg twice per day. At follow-up, the patient has shown stable hemoglobin levels of around 140 g/L and stable renal allograft function.

Discussion
Posttransplant anemia is multifactorial, especially PRCA, which is a rare occurrence. Pure red cell aplasia is characterized by anemia with an almost complete absence of red cell precursors in the bone marrow but essentially normal granulopoiesis and megakaryopoiesis.6

Our patient developed normocytic normochromic anemia and reticulocytopenia that necessitated regular blood transfusions. After exclusion of secondary causes of anemia (hemorrhage, hemolysis, viral infections, deficiencies), his bone marrow biopsy revealed findings suggestive of PRCA. These diagnostic criteria agreed with those reported by Winkler and colleagues,6 who described transplant recipients diagnosed with PRCA based on chronic and persistent anemia without an obvious cause. These patients required blood transfusions, had normal morphologies of other cell lines except for erythrocytes, had low reticulocyte counts, and had bone marrow biopsy findings consistent with PRCA.6 Findings confirmed posttransplant PRCA, mostly drug-induced either by MMF and or tacrolimus.

Acquired causes of PRCA were assessed in our case, and we excluded them one by one. Immunological causes were excluded by negative autoimmune evaluations (antinuclear antibody, antineutrophil cytoplasmic antibody, complement levels, erythrocyte sedimentation rate) and negative virology evaluations (CMV, Epstein-Barr virus, parvovirus B19). Liver and kidney functions were normal. Also, leukemia was excluded by peripheral blood and bone marrow evaluation.7 The possibility of drug-induced PRCA was highly suspicious, especially with regard to MMF and tacrolimus, which were both included in our patient’s maintenance therapy.

Our patient did not improve spontaneously, as mentioned by Sawada and colleagues, who suggested waiting for at least 1 month before instituting specific treatment, with the rationale that 10% to 12% of patients with idiopathic PRCA have a short- and self-limited course.8

We started treatment by holding MMF for 1 month, but transfusion-dependent anemia persisted for over 4 weeks. We then replaced tacrolimus with cyclosporine with satisfactory response manifested as a steady increase of hemoglobin levels without any blood transfusions. The patient was maintained on prednisolone and cyclosporine for 8 weeks and then MMF was gradually increased; with these modifications, the patient has maintained stable hemoglobin of 140 g/L and stable renal allograft function.

Other reports have also found suspicion for tacrolimus. These reports concluded that the most effective immunosuppressive agent for PRCA was cyclosporine, with an overall response rate of more than 75%, especially when other therapeutic modalities failed. Patients improved after replacement of tacrolimus by cyclosporine. Cyclosporine can also be a treatment option for idiopathic PRCA.9-11

Posttransplant PRCA is a rare disorder among kidney transplant recipients, which could be induced by maintenance tacrolimus therapy. We recommend conversion to a cyclosporine-based regimen.

From the 1Nephrology Department, Hamed Al-Essa Organ Transplant Center, Sabah Area, Kuwait; and the 2Department of Dialysis and Transplantation, Urology Nephrology Center, Mansoura University, Mansoura, Egypt
Acknowledgements: The authors have not received any funding or grants in support of the presented research or for the preparation of this work and have no declarations of potential conflicts of interest.
Corresponding author: Ayman Maher Nagib, Urology and Nephrology Center, Mansoura University, Mansoura, Egypt
Phone: +20 96560354347
E-mail: ayman_maher2005@yahoo.com 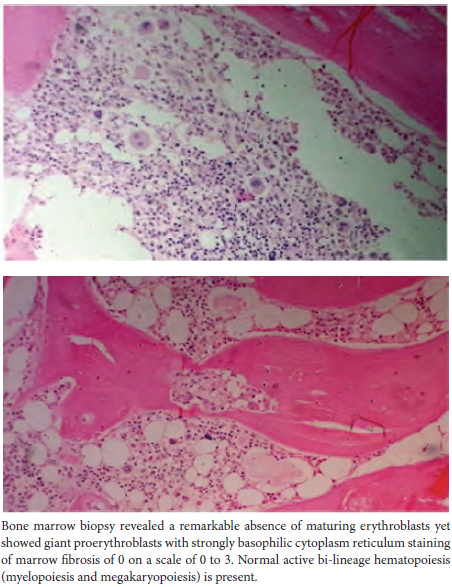 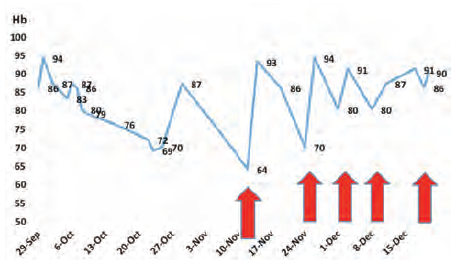