Objectives: The aim of this study was to evaluate the demographic features of corneal donors and available data of corneas in our eye bank during a 14-year period.

Materials and Methods: The demographic features of the corneal donors, the causes of death, the death-to-excision interval, serology results, the mean endothelial cell density, and the reasons for discarding the corneas were retrospectively evaluated.

Conclusions: We believe that preoperative detailed evaluations of graft quality in addition to review of donor-related medical records and data from previous surgeries, after collecting them in a single system, will have a positive effect on postoperative corneal survival.

Corneal disorders, one of the significant reasons for blindness globally, have complex epidemiology and can be caused by infectious and inflammatory disorders of many types.1 Surgical replacement of diseased corneas with healthy donor corneas can provide good visual results, with corneal transplant procedures having a long history.2

Eye banks are responsible for procuring, evaluating, storing, and distributing corneal tissue from suitable donors. The first relevant association in Turkey was the Turkish Eye Bank Association, which was established as part of Ankara University in 1957.3 Turkey currently has 48 eye banks.4 The eye bank of our own hospital was established in 2004 and has one of the highest numbers of procured corneas among the corneal banks of our country.

We reviewed data from a 14-year period of demographic features of corneal donors and features of procured corneas at our eye bank and evaluated whether any trends in these features over the years could be detected.

We retrospectively analyzed data of 3326 corneal donors registered at the University of Health Sciences, Kartal Dr. Lütfi Kırdar Training and Research Hospital’s Eye Bank (Istanbul, Turkey) between January 2006 and December 2019. The demographic features of the corneal donors, causes of death, the center procuring the cornea, the side of the procured cornea, the time between death and excision, donor serology, mean endothelial cell density (ECD), whether donors had volunteered to donate, the percentage of corneas used at our clinic and at an external center, and reasons for discarding corneas were recorded. All donor corneas were retrieved with the use of an in situ excision technique. The Konan Eye Bank KeratoAnalyzer EKA-04 (Konan Medical Corp, Hyogo, Japan) specular microscope was used for ECD measurements. The ECD value of donors with bilateral corneal excision was recorded as the mean ECD value of the 2 eyes, whereas unilateral measurement was entered for unilateral corneal excisions. A specular microscope was not available at our eye bank until 2010; therefore, it was not possible to measure ECD before that time. In addition, ECD was not measured in discarded corneas.

Statistical analyses
We used the Statistical Package for the Social Sciences Software (SPSS: IBM Company, version 17.0, IBM Corporation) for statistical analyses. Continuous variables are presented as means ± standard deviation. The Shapiro-Wilks test was used to determine whether group data had a normal distribution. The chi-square test and independent sample t test were used for evaluation. Between-group differences were determined with one-way analysis of variance (ANOVA) or Kruskal-Wallis using a post hoc test, Bonferroni, or Tamhane’s T2, depending on the distribution of the data. Pearson correlation analysis was used to determine the correlation between variables. Statistical significance level was accepted as P < .05.

Donor demographics
During the study period, 6524 corneas were procured from 3326 donors. Corneas were procured from both eyes in 3198 donors (96.1%) and from 1 eye in 128 donors (3.9%). Demographic characteristics showed a disproportionate distribution between male (n = 2530; 76.1%) and female (n = 796; 23.9%) donors. Donor numbers and distribution in male and female donors for each year of the study are presented in Figure 1.

Although the annual number of corneas procured at our eye bank varied significantly between 2006 and 2014, less variability was present between 2015 and 2019. No significant difference was observed in the number of discarded corneas by year (Figure 4).

Endothelial cell density of donor tissue and graft excision time
Endothelial cell density could be evaluated for 4028 corneal grafts (61.7%) in this study, and mean value was 3030.1 ± 484.3 cells/mm2. No difference was found between male and female donors for mean ECD (P = .77, t test). A statistically significant weak correlation was present between age and ECD value (Pearson correlation coefficient, r = -0.187; P < .001). When donors were classified based on age groups, a statistically significant difference in the ECD was found between groups (F = 24.9, dF = 3; P < .001, one-way ANOVA). The difference was valid between all paired age group comparisons except for the 41- to 60-year and 61- to 80-year age groups. All paired comparisons between age groups and mean ECD values are presented in Table 3.

The distribution of male versus female donors seems to be dominated by male donors in many eye bank studies, both nationally and internationally.9-11 According to the 2016 data of the Eye Bank Association of America (EBAA), 60% of donors were male and 40% were female.12 Similar to other studies, male dominance was seen among donors in our study (76.1% male vs 23.9% female donors). A study by the New Zealand National Eye Bank has reported that the causes of high mortality rates, such as cardiovascular disease and trauma, especially affect men in the young age groups and that this is reflected in the demographic data of the donors.11 A similar distribution was also seen in our study, with a high rate of male donors and deaths due to heart diseases and with multiple trauma being more common in men.

In EBAA’s review of causes of donor death between 2012 and 2016, cancer-related deaths took first place in all years.12 Deaths due to cancer took sixth place among causes of death of donors at our clinic. This could be due to the difficulties experienced by our eye bank in reaching detailed death reports of donors. Insufficient data regarding the primary tumor of a potential corneal donor who died due to cancer may lead to hesitation in the use of the cornea. The low mean donor age in our study could be due to donors with cancer not being preferred and the high rate of young deaths due to multiple trauma in our group. Recommendations from the EEBA and EBAA with regard to donors with cancer have stated that corneas can be procured from donors other than those with a primary malignant ocular tumor, metastatic solid organ tumor, and hematological neoplasm (leukemia, lymphoma, myeloma).13,14 We expect that more corneas will be procured at our eye bank in the coming years with the training to be given to our eye bank technicians and the studies to be conducted on having death reports include more details.

The minimum ECD that enables the use of the donor cornea has been specified as 2000 cells/mm2 in a 2000 report and 2300 cells/mm2 in a 2006 report of the EBAA, whereas the New Zealand National Eye Bank has specified a value of 2500 cells/mm2.22-24 However, in recent years, the ECD restriction has been removed from the EBAA and EEBA criteria, and the responsibility has been left to the eye bank director.13,14 The mean ECD in our study was 3030.1 ± 484.3 cells/mm2. A statistically significant negative correlation was found between donor age and ECD. Kwon and colleagues25 have reported that the ECD of donors is affected by age, race, prior ocular surgery (cataract and refractive), and diabetes mellitus.

Endothelial cell density was found to be lower in older age, in some races, donors with a history of cataract or refractive surgery, and patients with diabetes mellitus compared with other groups.25 In our study, we found that the ECD was especially high in donors from the 0- to 20-year age group. We were unable to evaluate the effects of previous systemic disorders and surgeries due to missing data of some donors. Although no correlation between DEI and ECD was found in other studies,9,26 we found a statistically significant but weak negative correlation between DEI and ECD in our study. Ruusuvaara27 found that ECD decreases as duration from death to enucleation increases. Although the EBAA and EEBA do not specify a definite period regarding DEI, their recommendations are to excise the graft and start corneal preservation procedures as soon as possible after death.

Corneas procured from voluntary organ donors constituted only 1.5% of the donors in our study. The percentage of female donors was higher among donors who donated their organs voluntarily. An increase in the share of multiorgan donors in the corneal grafts excised at our cornea bank in recent years was observed, but the ratio of voluntary donors was found to be lower than reported in other countries.11,12 According to the Organ and Tissue Transplantation Services Regulation published in our country in 2000, corneas can be procured by medical staff unless there is a written declaration refusing corneal donation. Studies have been performed to raise awareness about organ donation in our country in recent years, but the number of donors is still inadequate. A study conducted on relatives of potential corneal donors has reported that effective results can be obtained in changing the corneal donation-related negative opinions of families when an active team provides information and the opportunity for discussion, even in those with low socio-economic status and no previous knowledge on the matter.28 Although corneas can be procured without permission unless there is a declaration of refusal in our country, an increase in corneas to be procured from multiorgan donors will facilitate access to more detailed data about the donors.

In this study, we investigated the demographic features of corneal donors as recorded at our eye bank and 14 years of data belonging to corneas. As far as we know, our study is the most comprehensive eye bank study from tertiary referral centers in our country. We believe that detailed evaluations of graft quality preoperatively and evaluations of donor-related medical records and data from previous surgeries, once collected in a single system, will have a positive effect on corneal survival in the postoperative stage. In addition, a higher number of young donors and thus donor quality should be targeted by the Ministry of Health by ensuring adequate awareness of tissue and organ donation and ensuring communication and coordination between eye banks, forensic officials, and law enforcement. 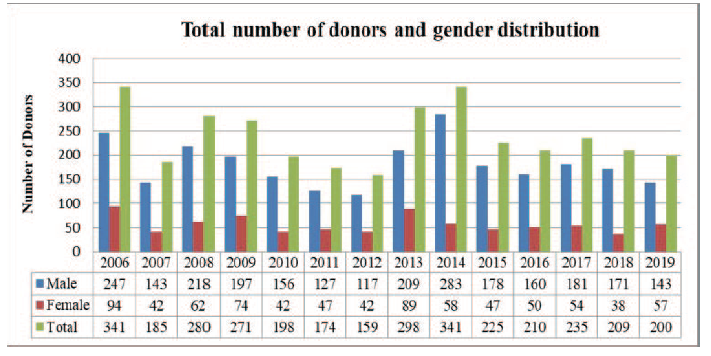 Figure 1. Distribution of Male Versus Female Corneal Donors by Year 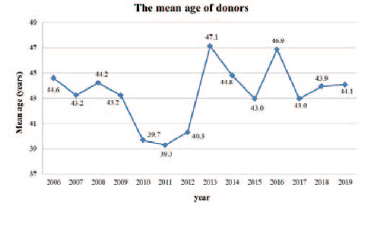 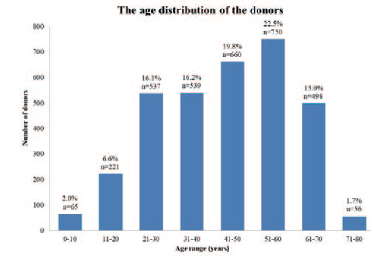 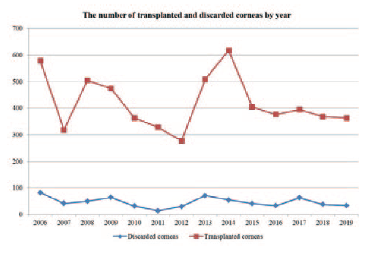 Figure 4. Number of Transplanted and Discarded Corneas by Year

Table 1. Causes of Death of Donors 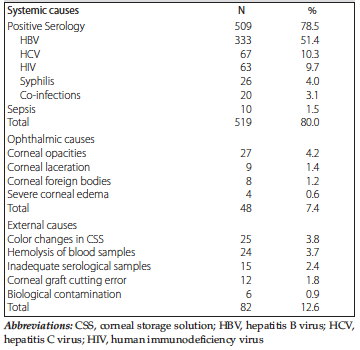