Objectives: Wharton jelly mesenchymal stem cells are good candidates for application in different aspects of regenerative medicine, and their long-time banking is important. In this study, the effects of trehalose, ascorbic acid, and Y-27632 on proliferation and survival rate of these cells after cryopreservation were investigated.

Results: We observed significantly increased postthaw viability, increased cell proliferation, and decreased doubling time of cells when 75 mM trehalose, 0.25 and 0.5 mM ascorbic acid, and 10 mM Y-27632 were used. In addition, increased viability, proliferation, and attachment were observed after 24 hours of pre­treatment with these cryoprotective agents and when they were added to conventional freezing medium.

Conclusions: The use of different cryoprotective agents in culture and freezing media could be useful for long-term storage of Wharton jelly mesenchymal stem cells.

Wharton jelly-derived human mesenchymal stem cells (WJ-MSCs) can be easily isolated and processed compared with embryonic stem cells and bone marrow-derived MSCs.1 These cells are capable of differentiating to osteogenic, chondrogenic, and adipogenic cells and also to other germ cell layers.1,2 Wharton jelly-derived human mesenchymal stem cells also have other advantages. They have a high proliferation capability, do not induce teratomas after transplantation,1 and can be cultivated in their undifferentiated state.2 Major possible application areas for human stem cells (hSCs) include (1) basic scientific research, (2) pharmacology, (3) tissue engineering, and (4) regenerative medicine.2,3 Mesenchymal stem cells have shown promise in these fields, and their long-time banking has become an important area of research for their future application.4,5

Trehalose is a nonreducing, nontoxic disaccharide of glucose found at large concentrations in many types of organisms that are able to tolerate and survive complete dehydration.5-9 This sugar may protect cells in 2 ways.9,10 First, according to “the water replacement hypothesis,” it has been shown that trehalose possesses a special ability to protect the cell membrane by stabilizing the interaction with lipids in the membrane. It also has a protective function for labile proteins by their stabilization during freezing and thawing processes.6,7 Second, according to vitrification processes, loss of water within cells results in both deceleration of molecular mobility and high levels of molecular packing. The production of an admixture of proteins, sugars, and other solutes is significantly stable during storage until water becomes available.6,9

These capabilities make trehalose an outstanding nonpermeable cryoprotectant that can be used alone or in combination with other materials (like dimethyl sulfoxide [DMSO]) for cryopreservation of hSCs.8,9 Trehalose works synergistically with DMSO as a cryoprotective agent.8 Trehalose is more efficient when available on both sides of the cell membrane.9

Ascorbic acid is a potent radical scavenger and has an antioxidant capacity, which protects the cells against detrimental effects of reactive oxygen species (ROS), including superoxide and hydrogen peroxide.11,12 When hSCs are subjected to stress factors, including freezing and thawing, or pH fluctuations, mitochondria start producing ROS, resulting in a series of consequences, including peroxidation of lipids, cell membrane disruption, and finally cell death.12 It has been shown that ascorbic acid recovers inactive vitamin E, diminishes ROS-induced DNA destruction, and decreases lipid peroxidation.13 The benefits of ascorbic acid make it a good candidate as a cryoprotectant for use in combination with other cryoprotective agents in the cryomedium.

Generally, hSCs are split into small aggregates or single cells during cryopreservation.14 These processes make hSCs susceptible to apoptosis and subject to voluminous cell death after complete segregation, decreasing the efficiency of cloning.14,15 This apoptosis may be related to RhoA guanosine triphosphate signaling pathways.15 In addition, a number of studies have reported that a selective Rho-associated coiled-coil kinase (ROCK) inhibitor, Y-27632, can increase cell survival rate by diminishing negative effects of segregation-induced apoptosis, which in turn increases the efficiency of cloning.4,14-16 These data have shown the potential use of Y-27632 as a supplement for freezing/thawing medium.

In this study, we investigated different concen­trations of trehalose, ascorbic acid, and Y-27632 as cryo­protective agents on proliferation and survival rate of WJ-MSCs after cryopreservation.

Mesenchymal stem cell preparation
Fresh human umbilical cord samples were aseptically collected from cesarean section delivery, which was done in the obstetrics department of Hafez Hospital affiliated with the Shiraz University of Medical Sciences. This study was approved by the ethics committee of Shiraz University of Medical Sciences. Written informed consent was signed by the parents for cell preparation from the umbilical cords.

Umbilical cord Wharton jelly samples were processed on the day of sample collection. Mesenchymal stem cells were derived as described previously.1,17 Briefly, in aseptic conditions, samples were diced into pieces of about 0.5 to 1 mm2. These pieces were transferred to 10-cm cell culture plates and allowed to attach. Fresh high-glucose Dulbecco’s modified Eagle’s medium (H-DMEM), supplemented with 10% fetal bovine serum (FBS) and 1% Pen-Strep (GIBCO, Berlin, Germany), was added to the plates, which were then transferred into a 37°C incubator containing 5% CO2 and saturated humidity atmosphere. Media were changed every 3 days. Cell passaging was conducted until 70% to 80% confluency was reached, with cell harvesting conducted with use of 0.05% trypsin-ethylenediaminetetraacetic acid (GIBCO).

The cells were harvested with 0.05% trypsin-ethylenediaminetetraacetic acid and suspended at 1 × 106 cells/mL in chilled sterile freezing medium as described above, and 3 × 105 cells were poured into 2-mL cryovials. Cryovials were put into a Mr. Frosty freezing container (Thermo Fisher Scientific, Rockford, IL, USA) containing isopropyl alcohol, which allowed a cooling rate of 1°C/min when stored at -80°C. Finally, after 24 hours of freezing, the cryovials were transferred from -80°C to -196°C in liquid nitrogen for 30 days.

Postthaw viability of cryopreserved cells and estimation of doubling time with Trypan blue exclusion assay
After 30 days of cryopreservation, cell sus­pensions from each cryovial were rapidly thawed at 37°C in water bath and quickly suspended in 10 mL of H-DMEM (GIBCO) supplemented with 10% FBS (GIBCO) and 1% penicillin-streptomycin. The cell suspension was centrifuged at 1500 revolutions/min for 5 minutes and resuspended in H-DMEM supplemented with 10% FBS and 1% antibiotics.

Assessment of postthaw cell viability (recovery rate) was performed with Trypan blue staining (Sigma, St. Louis, MO, USA). For estimation of viable cells, cells were counted immediately after thawing; to estimate doubling time of cells, we cultured 5 × 104 cells and counted them after 2 days.

MTT assay to determine cell proliferation after replating of frozen-thawed mesenchymal stem cells
To measure cell proliferation, we used the MTT (3-[4,5-dimethylthiazol-2-yl]-2,5-diphenyltetrazolium bromide) (Sigma) assay. Cryopreserved cells were thawed and rapidly subjected to MTT assay. For this, 2 × 104 cells were cultured in each well of 96-well Nunc plates (Sigma-Aldrich) and incubated at 37°C in a 5% CO2 atmosphere for 3 days.

Cells were then washed with phosphate-buffered
saline to remove unattached cells. Next, 10 μL of 0.005 g/mL of MTT solution were added to each well and incubated for 2 to 4 hours at 37°C. Plates were then centrifuged for 10 minutes at 1800 revolutions/min, the supernatant was discarded, and the plates were dried. Finally, to dissolve the nonsoluble formazan, we added 100 μL of DMSO to each well, and the absorbance was measured spectrophotometrically at 580 nm with the use of the Stat Fax 4200 microplate reader (Awareness Technology, Palm City, FL, USA)

Statistical analyses
All experiments were repeated 3 times, and data are shown as means and standard deviation. The independent t test was used for evaluation of data, and P values less than 0.05 were considered statistically significant. Statistical analyses were performed with SPSS software (SPSS: An IBM Company, version 19.0, IBM Corporation, Armonk, NY, USA).

Morphology and immunophenotype features of Wharton jelly mesenchymal stem cells
The initial growth of WJ-MSCs consisted of adherent spindle-shaped cells (Figure 1) that became confluent after an average of 21 days. Flow cytometry analyses showed that WJ-MSCs were positive for CD90 markers and negative for CD45, CD105, and CD34. The expression of markers was not changed after freezing (Figure 2).

Differentiation of Wharton jelly mesenchymal stem cells to adipocytes and osteocytes
After differentiation to adipogenic and osteogenic lineages, the presence of lipid vacuoles was confirmed by Oil Red O, and calcium deposition was detected with Alizarin red. We observed no dif­ferences in osteogenic and lipogenic differentiation before and after freezing with freezing media (Figure 3).

Although addition of 10 mM Y-27632 resulted in a great decrease in doubling time and increased proliferation of cells compared with the control group, only viability after thawing was significantly increased (P = .025). In addition, among all ex­perimental concentrations of trehalose, ascorbic acid, and Y-27632, we observed increased viability between groups A (P = .012) and C (P = .018). Increased proliferation was also observed between groups A (P = .018) and C (P = .020). Moreover, we observed significantly decreased doubling time between group A (P = .039) and group C (P = .002). Finally, microscopic investigations indicated increased attachment of cells in groups A and C over other groups (Figure 7 and Table 1).

Cell cryopreservation is recognized as the storage of living cells at ultra-low temperatures, generally at the temperature of liquid nitrogen (-196°C).19 At this temperature, all cellular processes of cryopreserved cells are stopped. Therefore, cell materials can be saved theoretically for an unlimited period of time.1,20 Advanced cryopreservation methods permit long-time banking of living cells for a variety of possible clinical applications.8,21 Also, it is noteworthy that there are still no ideal methods for hSC cryopreservation that would permit their widespread application in clinics and research.22 To achieve a highly efficient cryopreservation technique, a numbers of key factors must be optimized. The more important factors for successful cryopreservation are cryoprotective agents and treatment before cell culturing, cooling and rewarming rates, and the physiologic status of cell material and growth recovery conditions.20

The use of Y-27632 during cryopreservation allows the banking of large amounts of hSCs with a high yield of colony recovery after thawing, with scant differentiation rates.14 Heng showed that addition of 5 μM Y-27632 to the freezing media improved the recovery rate from 39.8% to 48% with the least morphologic change.4 Martin-Ibanez and associates concluded that pretreatment and freezing with 10 μM Y-27632 can increase cell survival from 30% to 56%, increase colony formation, and facilitate storage of human embryonic stem cells.14 In our study, although pretreatment with 10 μM Y-27632 improved cell recovery after freezing from 60% to 70%, this improvement was not significant, with its addition to the freezing medium resulting in a slight improvement from 70% to 73.33%. The overall effect of addition of Y-27632 in both pretreatment and freezing media resulted in a statistically significant enhancement in the efficiency of freezing and indicated its beneficial effect for cryopreservation.

We found that 24-hour pretreatment with these cryoprotectants (75 mM trehalose, 0.25-0.5 mM ascorbic acid, or 10 mM Y-27632), followed by addition of them to freezing media, is an efficient method for cryopreservation of WJ-MSCs and potentially can be applied to other cell types. This method can improve the traditional cryopreservation method and can significantly increase the recovery rate of cryopreserved cells. In addition, our data support the protective nature of trehalose, ascorbic acid, and Y-27632 against freezing injuries. A com­bination treatment with the optimum concentrations of these 3 cryoprotectants, as a cocktail solution, and comparisons with postthaw characterization of stemness and in vitro differentiation potential are future recommendations. 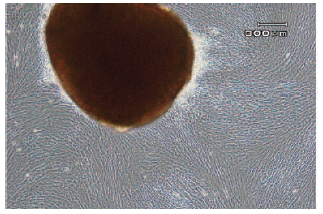 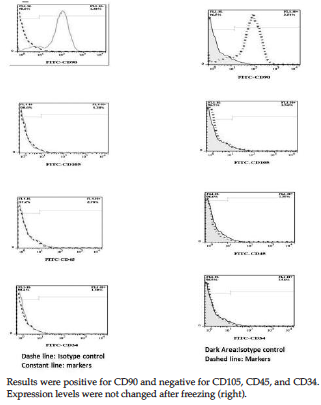 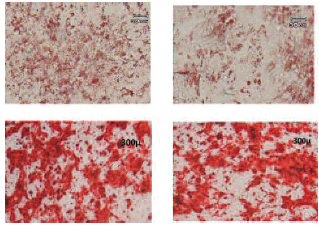 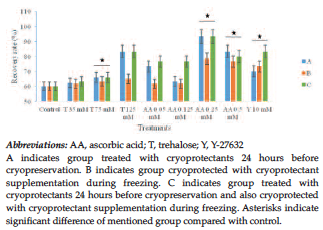 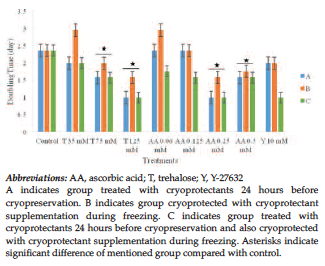 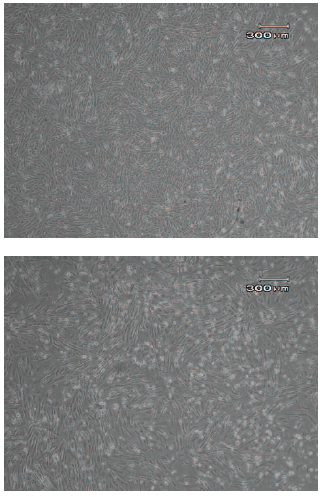 Figure 7. Better Attachment of Wharton Jelly Mesenchymal Stem Cells in Groups A and C (×100) (Left) Compared With Group B (Right) 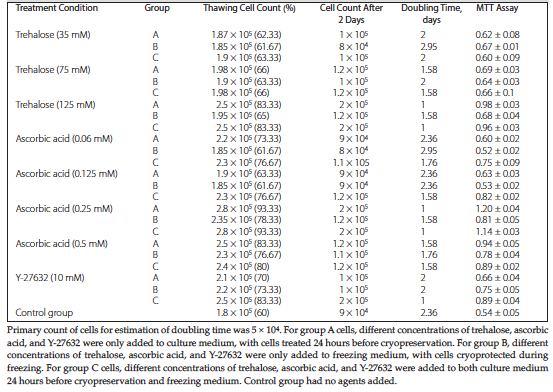