In this case report, we present the rare complication of proximal migration of ureteral stent after kidney transplant, and we describe our approach for its diagnosis and treatment. Although endoscopic management is the treatment of choice for retrieval of migrated stents, we reexplored the transplant in response to erroneous reporting of ureteral stent lying in an extravesicular position on a pelvic computed tomography scan. Subsequent exploration disproved the original interpretation of the image. Proximal stent migration may result from retrograde peristalsis and is generally related to suboptimal stent length.

We report the case of a 54-year-old male patient with end-stage renal disease secondary to a failed previous kidney transplant from antibody-mediated rejection. The cause of end-stage renal disease before the first transplant was polycystic kidney disease and hypertension. He had also undergone bilateral native nephrectomies for renal cell carcinoma and had received external beam radiation for T1c N0 M0 cancer (cancer found on needle biopsy without any lymph node involvement or metastatic disease) of the prostate. He also had nonobstructive coronary artery disease and colonic diverticulosis.

He underwent a deceased donor renal transplant from a 39-year-old donor with a Kidney Donor Profile Index (a percentile measure that is based on the kidney donor risk index and data from the United Network of Organ Sharing and the Scientific Registry of Transplant Recipients) of 21%, terminal creatinine of 0.59 mg/dL, and urine output of 25 to 50 mL/h for 72 hours before organ recovery. Hypothermic machine perfusion demonstrated a flow rate of 99 mL/min and resistance of 0.21 mm Hg/mL/min at a pressure of 30/16 mm Hg. The kidney attained immediate function with urine output of 900 mL in the first 12 hours posttransplant.

Urine output suddenly dropped on postoperative day 1, which prompted a renal allograft Doppler evaluation that demonstrated patent transplant vasculature, normal resistive indices, and mild dilation of the proximal collecting system. Also, the ureteral stent was visualized in the urinary bladder with no indication of retroperitoneal fluid collection (Figure 1). On postoperative day 2, urine output was 1200 mL but creatinine level continued to worsen. The patient received hemodialysis for fluid overload on postoperative day 2. The available evidence was consistent with acute tubular necrosis, and so we continued to manage the patient’s condition conservatively for delayed graft function. The urine output on postoperative day 3 was only 80 mL. Another Doppler ultrasound imaging was obtained, which showed patent transplant vasculature, stable mild hydronephrosis, but no stent in the bladder. An abdominal radiograph was then obtained, which showed the ureteral stent with the curled lower end in the pelvis (Figure 2); thus, we assumed it was still in place. On postoperative day 4, the urine output was zero, but a renal allograft Doppler image again showed patent vasculature with stable mild hydronephrosis. Bladder ultrasonography showed 34 mL of urine in the bladder. The patient was hemodynamically stable and did not require additional hemodialysis. We attributed these findings to acute tubular necrosis and delayed graft function.

On postoperative day 5, around 4 am, the patient reported suprapubic pain with abdominal disten­sion. Examination revealed a diffuse mild abdominal distension, tender to palpation but without any peritoneal signs, with a tympanic note to palpation and a fluid thrill. Tenderness was more pronounced in the suprapubic region. An emergent noncontrast computed tomography (CT) scan of the abdomen and pelvis was obtained at 5 am that demonstrated the coiled lower end of the ureteric stent ending at the bladder wall (Figure 3), which was described by the radiologist as “ureteral stent lying in an extra-vesical location,” along with a left retroperitoneal hematoma superior to the kidney, anasarca with edematous tissue planes, and moderate ascites with dilated large intestine without any air fluid levels or transition points.

These findings prompted us to immediately reexplore the transplanted kidney, and the patient was returned to the operating room at 7 am. The evidence indicated proximal migration of the stent into the ureter and urinary obstruction resulting in hydronephrosis. Although ascites did raise a concern for urine leak, the absence of any significant fluid collection around the urinary bladder and retroperitoneum rendered that possibility unlikely. The left-side Gibson incision was reopened. The peritoneum was bulging through the central part of the incision, and a large volume of ascites was drained through a hole in the peritoneum, which was then closed with 3-0 Vicryl suture (polyglactin absorbable surgical suture). A retroperitoneal hematoma was found superior to the kidney, which we subsequently evacuated. There was no sign of fresh bleeding. There was good flow within the transplant renal vein and a good pulse within the renal artery. The kidney appeared firm and pink and did not appear hydronephrotic. The transplant ureter was 7.5 cm long, and the 5F double J stent was 12 cm in length. The ureteric anastomosis was found to be intact without any sign of disruption or leak, which was confirmed by inflation of the urinary bladder with irrigation solution via a 3-way Foley catheter. The stent had clearly migrated proximally into the ureter to the level of the anastomosis.

We performed a ureterotomy 5 cm from the ureteropelvic junction and retrieved the distal end of the stent, placed a guidewire in the distal end, and attempted to pass the wire into the bladder lumen. Cystoscopy did not confirm presence of the wire in the bladder. Apparently, we had created a submucosal pocket. The stent was pulled back into the ureter. We then proceeded to insert a guidewire retrograde through the bladder in an attempt to pull the stent into the bladder lumen so that we could avoid disruption of the intact anastomosis, but we were not able to confirm placement of the guidewire in the transplant ureter. It should be noted that the bladder had 2 native ureteric orifices and 2 transplant ureteric orifices. The guidewire may have diverted into the older right transplant ureter. These circumstances impeded the exploration of the left ureteric anastomosis by retrograde cannulation.

Due to the above-mentioned challenges with cystoscopy, we decided to proceed instead with a revision of the ureter-bladder anastomosis. We closed the ureterotomy with a running stitch of 5-0 polydioxanone suture (PDS). We chose a new site on the bladder for the revision anastomosis, since our previous maneuvers to stent the anastomosis via the ureterotomy had inadvertently created a submucosal pocket at the original site. The original bladder opening was closed with a 5-0 PDS running stitch, and the ureter was trimmed. A cystotomy was then performed at a new site, followed by anastomosis of the ureter to the bladder wall with 5-0 PDS suture as a continuous running stitch over a 5F 16-cm double J ureteral stent. After completion of the anastomosis, there was no sign of urine leak. We then proceeded with closure of the abdominal wall. The patient attained normal allograft function postoperatively with a rapid return of serum creatinine to 1.4 mg/dL.

Kidney transplant surgeons routinely use ureteral stents to support a ureteroneocystostomy and prevent urinary complications such as urine leaks. We chose to stent this ureteroneocystostomy because this patient had been anuric for 4 years and had developed a small atrophic bladder. We generally do not stent healthy bladders, because, in transplant recipients, ureteral stents have been associated with complications such as obstruction, proximal or distal migration, calculus formation, and breakage during retrieval. Proximal migration is very rare but has been reported in kidney transplant recipients.1,2 Ureteral stents may also be associated with significant morbidity, including pain and hematuria.3 Perforation and misplacement of a ureteral stent into the inferior vena cava and into the duodenum have also been reported.4,5

In animal experiments, retrograde ureteral peristal­sis has been demonstrated after ureteral stenting,6 and this is a possible explanation for proximal migration. Insufficient stent length has been suggested as the cause of proximal migration of stents, as reported in several nontransplant publications.7,8 In our patient, the length of the transplant ureter from the ureteropelvic junction was merely 7.5 cm, so we chose a 12-cm-long stent. Although the stent length was adequate in relation to the length of the ureter, this stent length may have contributed to the proximal migration complication. That is, a longer stent may have remained in place, without migration.

Generally, misplaced stents may be retrieved endoscopically via ureteroscope.9 We chose to return the patient to the operating room in response to a CT scan report that suggested the presence of the stent outside the bladder; also, the patient had reported acute abdominal pain with moderate ascites. Because there was no significant fluid collection in the retroperitoneum around the bladder, urine leak was not considered likely. Regardless, we opted for a cautionary approach, to explore the transplanted kidney. On exploration, the ureteroneocystostomy was intact, without any urine leak, and the ureteral stent was not in an extravesicular location. We attempted to perform a ureterotomy and push the stent distally into the bladder via the ureter but failed; during this procedure, a submucosal pocket was inadvertently created on the bladder wall, caused by the misdirected guidewire. We attempted cystoscopic retrieval, but the cannulation of the correct orifice proved difficult, and we chose to revise the ureteroneocystostomy instead. The ascites and anasarca were a result of uremia and were unrelated to the stent migration. It is noteworthy that our patient’s acute abdominal pain paired with the CT findings described above, prompted us to pursue exploration instead of endoscopic retrieval.

(1) Stents are associated with a risk of complications, and, as such, ureteral stents for kidney transplants should be reserved for cases with an inherent associated risk of urinary complications, such as a thin-walled atrophic bladder. (2) Appropriate length of the stent should be determined in context, according to the length of the transplant ureter. Generally, longer stents have a lower risk of migration. (3) Radiology reports should be interpreted with caution. (4) Endoscopic retrieval remains the treatment of choice for stent retrieval, and open exploration should be reserved for conditions that are unfavorable for endoscopic retrieval.

From the 1Department of Surgery and the 2Department of Urology, Wayne State University School of Medicine, Detroit Medical Center-Harper University Hospital, Detroit, Michigan, USA
Acknowledgements: The authors have not received any funding or grants in support of the presented research or for the preparation of this work and have no declarations of potential conflicts of interest.
Corresponding author: Rajeev Sharma, Detroit Medical Center-Harper University Hospital, Wayne State University School of Medicine, Department of Surgery, Detroit, MI 48201 USA
E-mail: drsharma.r@gmail.com 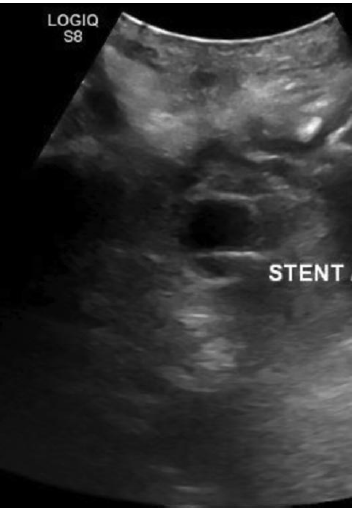 Figure 1. Ultrasonogram From Postoperative Day 1 Shows the Stent in the Urinary Bladder 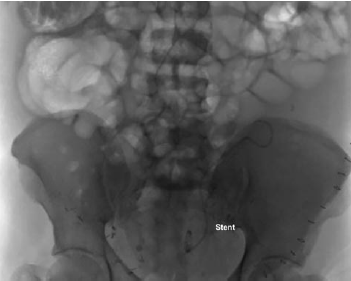 Figure 2. Abdominal Radiograph from Postoperative Day 4 Shows the Lower Curled End of the Stent in the Pelvis 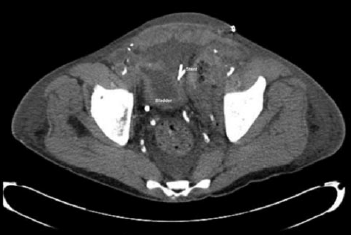 Figure 3. Computed Tomography Scan on Postoperative Day 5 Shows the Curled Lower End of the Stent in the Bladder Wall