Hepatitis C virus (HCV) recurrence after liver transplant is a universally understood complication. Once the new graft is reinfected with HCV, a rapid increase of virus is induced, resulting in a high proportion of patients developing recurrent hepatitis, with 20% to 40% of patients progressing to liver cirrhosis in 5 years1-4 and half of patients subsequently showing decompensation after several years.3-5 Thus, treatment for posttransplant HCV recurrence is a major issue for improving posttransplant survival.

Many reports have supported the concept that progression of HCV recurrence is the main reason for the poor prognosis after liver transplant in HCV-positive patients.1,3-5 This has resulted in most transplant centers providing concerted efforts for HCV eradication after liver transplant. Similar to that shown in nontransplant patients, a sustained virological response (SVR) induces significantly better survival in HCV-positive transplant patients.6-9 During the interferon (IFN) era, however, transplant patients were difficult to treat, and the SVR rate was not satisfactory.9-11 After the introduction of the combin­ations of an IFN-free, direct-acting antiviral (DAA) regimen, the SVR rate dramatically improved,12,13 and better prognosis could be expected even in transplant recipients with HCV.

Several reports have shown that HCV infection can lead to various extrahepatic manifestations, such as cryoglobulinemia,14 renal dysfunction,15 insulin resistance,16 cardiovascular diseases,17,18 neurological disorders,19 and so on.20 Recent reports have shown that not only liver-related but also non-liver-related mortality rates are significantly higher in HCV-positive patients according to the Fibrosis-4 index.21 Therefore, transplant centers should perhaps focus on complications other than progression of HCV recurrence in transplant recipients, especially in the recent era of combination treatment with highly effective DAAs.

In this study, we revisited survival after liver transplant in patients with HCV infection. We also focused on causes of death in these patients to investigate reasons for death other than progression of recurrent disease.

This study conformed to the ethical guidelines of the 1975 Declaration of Helsinki and was approved by the ethical committee of Nagoya University Graduate School of Medicine (No. 2015-0318).

Patients received the immunosuppression protocol with a steroid bolus immediately after reperfusion of the graft; afterward, prednisolone and calcineurin inhibitors (29 with tacrolimus and 11 with cyclosporin A) were introduced. In some patients, especially those with pretransplant renal dysfunction, mycophenolate mofetil was also introduced to reduce the dose of calcineurin inhibitors. The dose of steroid was gradually tapered; however, we generally continued a low maintenance dose of prednisolone at 5 mg/day from postoperative month 3 to postoperative year 2 and then at 2.5 mg/day for the next 3 years or until the patients achieved SVR by anti-HCV treatment. Protocol biopsy was performed at 1, 3, 6, and 12 months and then subsequently every 6 months; if patients showed recurrence of HCV infection, anti-HCV treatment was introduced for applicable patients.

Statistical analyses
The Kaplan-Meier method was used to investigate survival after liver transplant, and the log-rank test was used to compare survival among each subgroup of patients. To compare differences between HCV-positive and HCV-negative patients, propensity score matching was performed, with survival compared between 40 HCV-positive and 31 matched HCV-negative patients. P < .05 was considered statistically significant. All statistical analyses were performed using SPSS version 24.0 (IBM Corporation).

For background factors that were statistically significant between groups (HCC, recipient age, and calcineurin inhibitor; Table 1), we investigated propensity score matching between patients with and without HCV. Table 2 shows background results after propensity score matching. We found survival to be lower in the 40 patients positive for HCV compared with the 31 patients negative for HCV (Figure 3B; P = .024)

Although survival of transplant patients with HCV was definitely lower compared with survival in patients with other etiologies, causes of death were not different between those with and without HCV, with HCV recurrence and progression of disease less than we expected in our cohort.

In the present study, we confirmed that survival rates after liver transplant were significantly lower in HCV-positive patients compared with HCV-negative patients. It is generally known that patients with HCV infection have a poor posttransplant prognosis. However, in our study cohort, mortality related to HCV recurrence was unexpectedly low and the dominant causes of death were unrelated to progression of liver disease due to HCV recurrence. With this finding, we focused on causes of death other than disease progression of HCV recurrence in our transplant patients.

One reason for the small number of HCV recurrence-related deaths in our cohort may have been because of the low-dose maintenance of steroids after liver transplant. Berenguer and colleagues reported that shorter duration of prednisolone was a significant factor affecting survival, and they hypothesized that avoiding rapid tapering of steroids improved the prognosis of such patients.22,23 Samonakis and colleagues also reported that maintenance steroids were associated with less fibrosis after liver transplant, and they discussed that rapid withdrawal of steroids may allow early reconstitution of the immune system, leading to severe immune-mediated liver damage and thus to more frequent and severe forms of HCV recurrence.24

In our cohort, despite the lower frequency of HCV recurrence-related deaths, we found that prognosis after liver transplant in HCV-positive patients was generally poor. There are several extrahepatic manifestations associated with HCV infection, such as cryoglobulinemia, renal involve­ment in the form of membranoproliferative glomerulonephritis, mesangial glomerulonephritis, and focal segmental glomerulonephritis, as well as metabolic manifestations (including diabetes and insulin resistance), cardiovascular diseases (including coronary, peripheral, and cerebrovascular diseases), and some types of peripheral neuropathies.20

In our cohort, causes of death in 4 patients were considered to be liver related due to the HCV infection, with 1 patient with fibrosing cholestatic hepatitis (patient 7; see Table 3) and 3 patients with HCC recurrence (patients 10, 11, 12; see Table 3). The remaining 10 patients died from factors unrelated to progression of HCV disease (Table 3). In the early postoperative period, the causes of death were rejection (1 each of acute and chronic rejection) in 2 patients, infection in 2 patients, and hemophagocytic syndrome and splenic aneurysm rupture in 1 patient each.

Some reports have shown higher incidence of ACR in HCV-positive posttransplant patients,25,26 although some reports have not supported this,27,28 with agreement remaining controversial.29,30 Furthermore, in our group, 1 HCV-negative patient (patient 17) died from severe ACR (Table 4). Another point that should be discussed with regard to rejection is the relationship with antiviral treatment for HCV. In our cohort, patient 4 died from chronic rejection during IFN plus ribavirin treatment. Chronic rejection is a relatively rare event after liver transplant, with only few reports describing a relationship between chronic rejection and IFN treatment; thus, this remains a topic of debate.31-33 Patients 22 and 23 (HCV-negative patients) also died from chronic rejection. In general, the correlation between rejection and HCV should be carefully interpreted.

In our cohort, 2 patients died from pneumonia and sepsis in the early postoperative period. Gayowski and colleagues showed that HCV was a risk factor for infectious morbidity after liver transplant. The investigators pointed out the immunomodulatory effect of HCV and that it may facilitate infections from pathogens associated with depressed cell-mediated immunity.34 Giannella and colleagues reported that HCV recurrence was an independent risk factor for carbapenem-resistant Klebsiella pneumoniae after liver transplant.35

In the late posttransplant period in our cohort, a main cause of death was HCC recurrence; in contrast, in the remaining patients, causes of death included protein-losing enteropathy, biliary stricture, and renal failure, which are not considered directly related to HCV recurrence.

Fujita and colleagues showed that late biliary anastomotic strictures were found in posttransplant patients with HCV and that early recurrence of HCV was one of the independent factors associated with late biliary anastomotic strictures.36 Renal dysfunction is another issue that can possibly affect prognosis after liver transplant. After transplant, although immuno­sup­pression using a calcineurin inhibitor is the key to avoiding cellular rejection, administration of calcineurin inhibitors could itself precipitate the renal dysfunction after liver transplant in some patients.37 A recent report showed that HCV infection is a risk factor for posttransplant chronic renal failure, as well as age, male sex, and estimated glomerular filtration rate at discharge.38

In transplant patients, DAA combination therapy has resulted in a high rate of SVR, similar to that shown in nontransplant patients.12,13 Hence, there is an interesting clinical question regarding whether survival outcomes not related to liver disease will be reduced. Tada and colleagues reported that, among untreated HCV-positive patients, a Fibrosis-4 index score greater than 3.25 was an independent and predictive risk factor for both liver-related and non-liver-related death.21 The investigators also reported that SVR is associated with all-cause mortality in HCV-positive patients.39 In our cohort, only 7 of 14 patients who died could receive anti-HCV treatment. In addition, only 1 of the 7 treated patients attained SVR (by pegylated IFN + ribavirin treatment). One reason why few received treatment was death during the early postoperative period and because HCV treatment could not be introduced for those with HCV recurrence-unrelated comorbidities. In contrast, no patients in our cohort died after the start of the DAA era. Further studies are needed on whether DAA treatment could reduce not only HCV-related but also HCV-unrelated death in transplant patients.

A limitation of this study was that it was a single-center experience and retrospective study with a small number of patients. Despite our limited cohort, we concurred that HCV progression remains a main cause of death, as universally agreed. However, other causes of death that are not related to prog­ression of HCV disease require more consideration. Along with further validation of our findings, we suggest that transplant patients should be carefully followed, especially those who have attained SVR in this IFN-free era to confirm the results of this study.

From the 1Department of Gastroenterology and Hepatology and the 2Department of Transplant Surgery, Nagoya University School of Medicine, Nagoya, Japan
Acknowledgements: The authors have not received any funding or grants in support of the presented research or for the preparation of this work and have no declarations of potential conflicts of interest.
Corresponding author: Masatoshi Ishigami, 65 Tsurumai-cho, Showa-ku, Nagoya 466-8550, Japan
Phone: +81 52 744 2190
E-mail: masaishi@med.nagoya-u.ac.jp 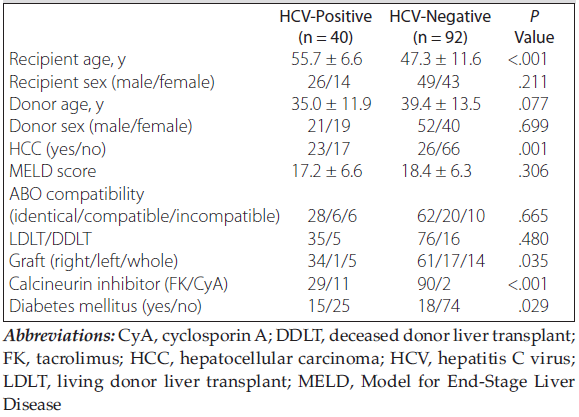 Table 1. Preoperative Background Data of Patients With and Without Hepatitis C Virus 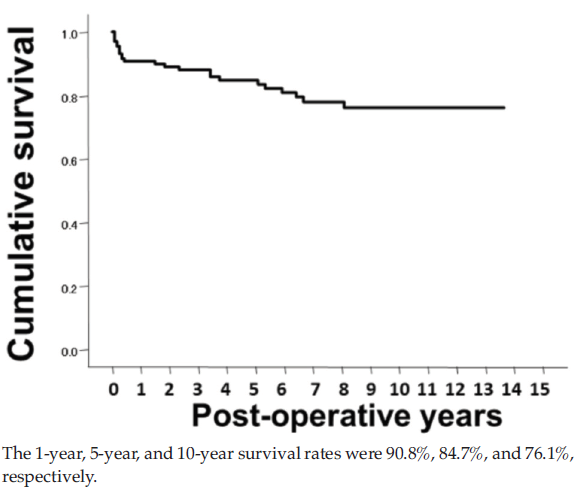 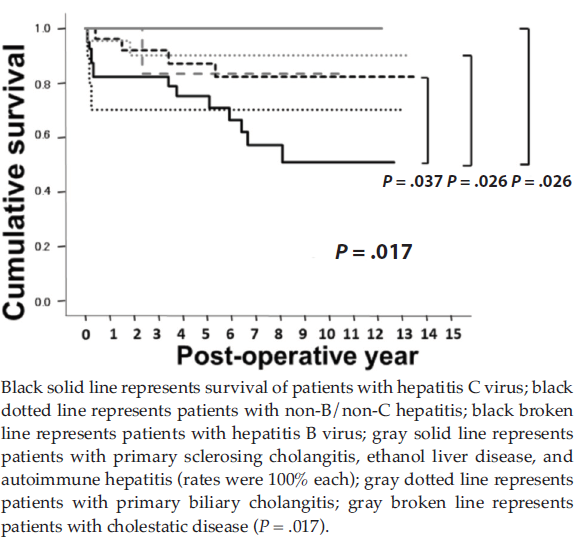 Figure 2. Posttransplant Survival of Patients With Chronic End-Stage Liver Diseases According to Reasons for Transplant 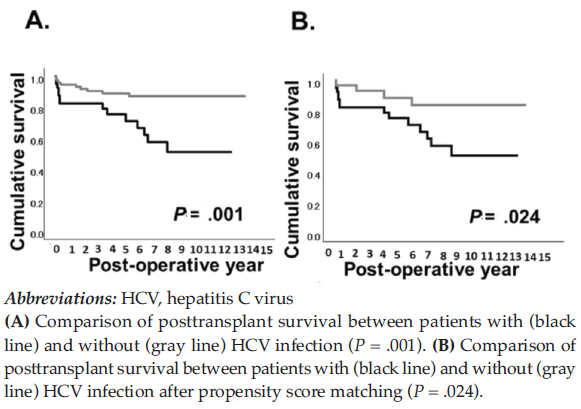 Figure 3. Survival of Patients With and Without Hepatitis C Virus 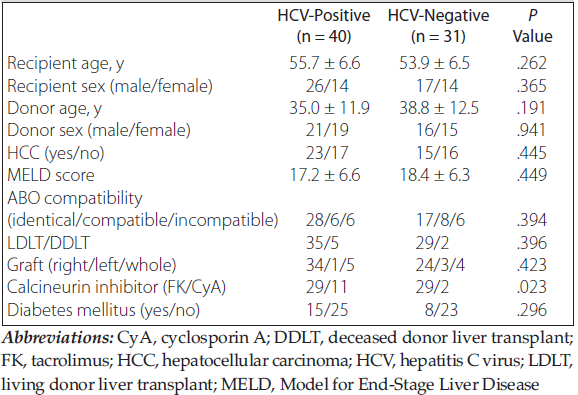 Table 2. Preoperative Background Data of Patients With and Without Hepatitis C Virus After Propensity Score Matching 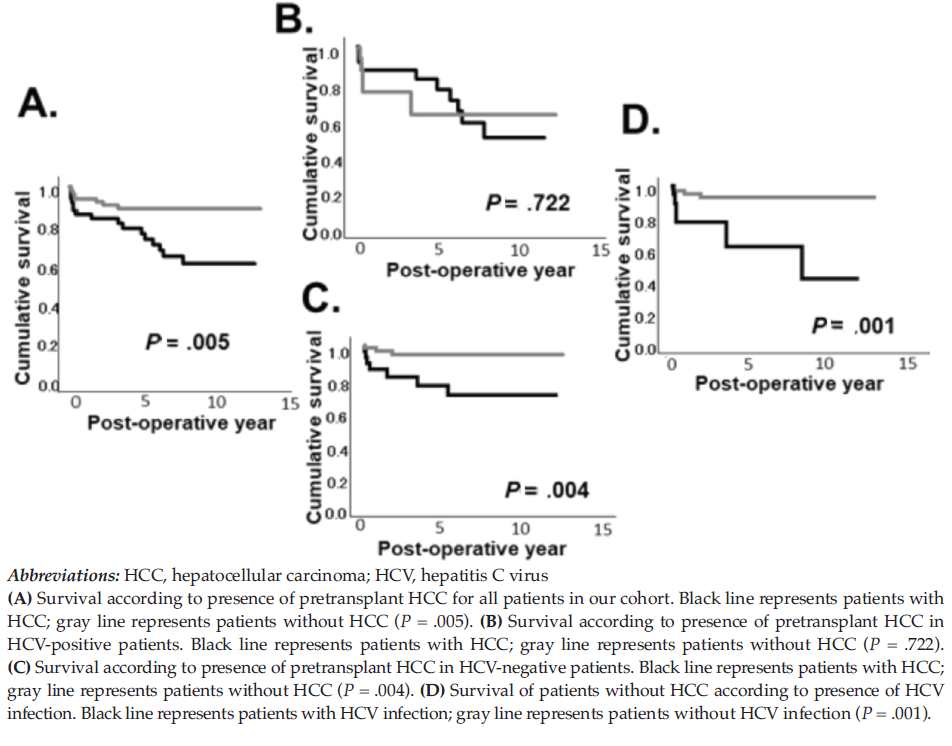 Figure 4. Survival According to Presence of Hepatocellular Carcinoma 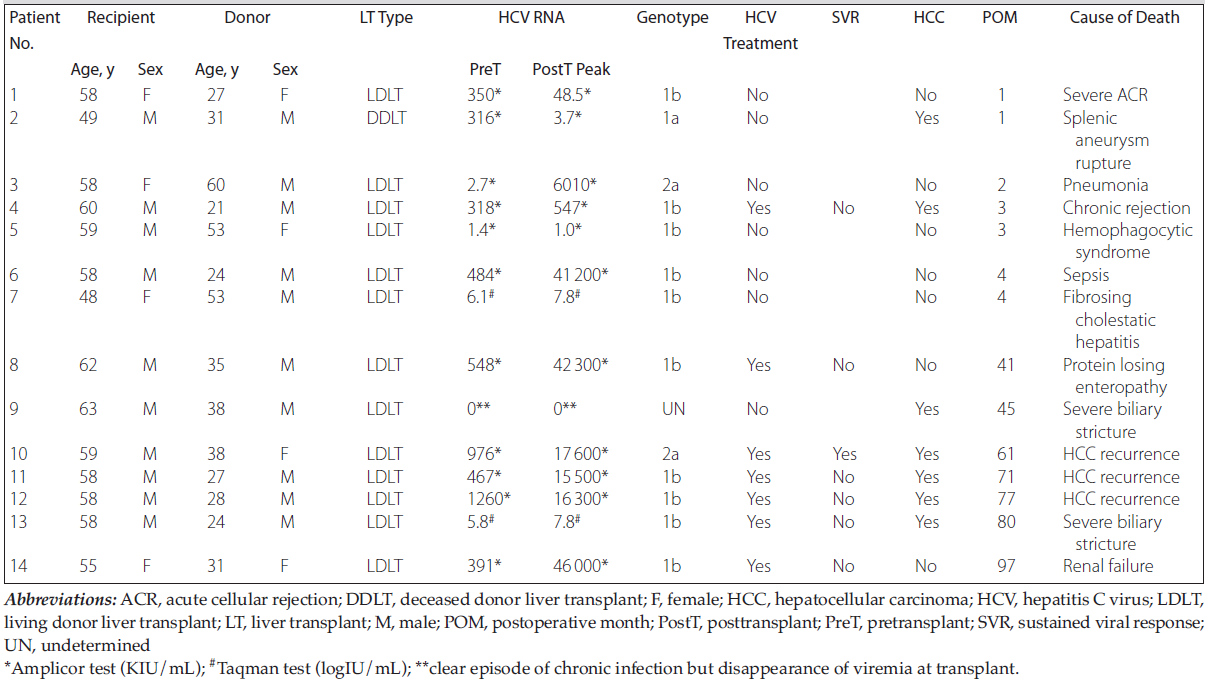 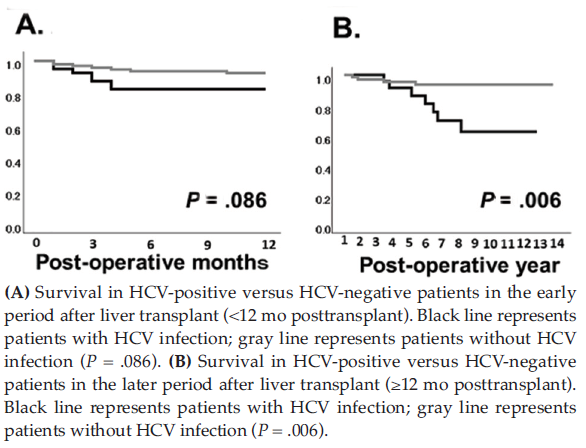 Figure 5. Survival in Patients With and Without Hepatitis C Virus Infection After Liver Transplant