Objectives: This study aimed to compare the impact of deceased-donor organ procurement techniques (standard versus modified standard) on biochemical outcomes after liver transplant.

Materials and Methods: From February 2006 to December 2013, organs were recovered from 105 consecutive deceased donors by our transplant team. All organ procurement procedures were performed by a pioneer surgeon experienced in organ recovery from deceased donors. Donors were divided into those who had the abdominothoracic approach, which is referred to as the standard technique, and those who had the abdominal approach, which is referred to as the modified standard technique. Both groups were compared in terms of age, sex, weight, height, body mass index, liver graft weight, cross-clamping time, cold ischemia time, and liver function tests in recipients over the first 3 postoperative days.

Results: Our study group included 66 male and 39 female donors, with an age range of 1 to 93 years (median of 44 y, means ± standard deviation of 43.8 ± 23.7 y). Among the deceased donors, 73 underwent the modified standard technique and 32 underwent the standard technique. There were no statistically significant differences between groups in terms of age, sex, weight, height, body mass index, graft weight, cold ischemia time, and liver function tests in recipients over the first 3 postoperative days. We observed a statistically significant difference between groups in terms of cross-clamping time (P < .001).

Conclusions: Except for the decreased cross-clamping time, the modified standard technique for deceased organ retrieval had no effect on clinical outcomes in recipients after liver transplant. However, this retrospective study requires additional prospective investigations to more fully understand the differences.

Solid-organ transplantation has become the criterion standard treatment modality for many diseases, especially chronic organ failure. The first successful kidney transplant to a human was performed in the 1950s. Subsequently, successful liver, heart, and pancreas transplant procedures were performed in the 1960s. At the beginning of the 1980s, successful lung and intestinal transplants were done.1 Along with developments in surgical techniques and the discovery of immunosuppressive drugs to better prevent graft rejection, solid-organ transplantation has become a hope for thousands of people who have no other options for their disease.2,3

Deceased organ donors are the most important source for organ transplant in Western countries, which is in contrast to the use of living donors in many underdeveloped countries.4 One of the main differences between living and deceased donors is the incision technique used during the organ procurement process. For recovery of organs from deceased donors, thoracoabdominal cavities are routinely opened via midline incision extending from the suprasternal notch to the symphysis pubis. This procedure is called the thoracoabdominal approach or the standard organ procurement technique (SOPT).5,6 When intrathoracic organ retrieval is not needed, intraabdominal organs can be recovered through abdominal incisions without sternotomy. This approach, which is referred to as the modified standard organ procurement technique (MSOPT), can reduce time to cold preserving solution perfusion and may provide rapid organ retrieval.5 Herein, we aimed to compare the effects of deceased-donor recovery techniques on biochemical outcomes after liver transplant.

From February 2006 to December 2013, 105 consecutive deceased donors underwent organ procurement procedures by the Inonu University Liver Transplant Institute team. All procurement procedures were performed by a pioneer surgeon who is experienced in organ recovery from deceased donors. Procurement procedures were performed with the abdominothoracic approach in 32 deceased donors (SOPT group) and with the abdominal approach in 73 deceased donors (MSOPT group). Both groups were compared in terms of age, sex, weight, height, body mass index, liver graft weight, time to cross-clamping, cold ischemia time, blood group (A, B, AB, O), and liver function tests in the first 3 posttransplant days in recipients. Cross-clamping time was defined as the time between initiation of the incision and start of cold perfusion. Cold ischemia time was defined as the time interval between application of deceased-donor aortic cross-clamp and release of recipient cross-clamp.

Standard organ procurement technique
A midline incision was made from the suprasternal notch to just above the symphysis pubis. Long incision provides better exposure for removal of heart, both kidneys, the liver, and other thora-coabdominal viscera. Complete mobilization of the distal small bowel, right colon, and duodenum was performed to allow for identification of the distal aorta, iliac bifurcation, and the distal inferior vena cava. The infrarenal aorta served as the site for insertion of the canula, which allowed flushing of the organs with cold preservation solution. The supraceliac aorta was encircled, followed by limited dissection of the hepatic hilum and the pancreas. The portal system was cannulated via the inferior mesenteric vein, and the organs were flushed with preservation solution and topically cooled with slush. The thoracic organs, liver, pancreas, and kidneys were then consecutively removed.5,6

Modified standard organ procurement technique
The abdominal cavity was opened with a longitudinal midline incision from xiphoid to symphysis pubis and a transverse incision extending 1 cm above umbilicus to both flank regions. The inferior vena cava was suspended from the superior of the left renal vein in accordance with the Cattell and Braasch maneuver. The inferior mesenteric vein was suspended, and a cannula was inserted into it. The distal abdominal aorta was turned and suspended near the iliac bifurcation, and a cannula was placed into it. Both hemidiaphragms were opened anteriorly, in a lunar-type shape, near the costochondral region. The opening of the inferior vena cava was detected in the right atrium on pericardia. After a cross-clamp was placed on the supraceliac abdominal aorta, the right atrium was also opened as an extra precaution against overdistention of the liver. All inotropic and chronotropic medications were stopped. The inferior vena cava was opened from superior of the left renal vein, and then the cannula of the distal abdominal aorta was irrigated with 3 L of University of Wisconsin solution. Crushed ice was placed into the abdominal cavity. One liter of University of Wisconsin solution was placed into the inferior mesenteric vein cannula for perfusion of the portal vein. The visceral organs were removed with en bloc dissection after perfusion was finished. All vascular pedicles of organs were dissected on the back table.5

Statistical analyses
Statistical analyses were performed with SPSS software (SPSS: An IBM Company, version 22.0, IBM Corporation, Armonk, NY, USA). Quantitative variables are presented as means and standard deviation (SD), median, and ranges. Qualitative variables are presented as numbers and percentages. Kolmogorov-Smirnov normality test was used to determine whether quantitative variables had normal distribution. The nonparametric Mann-Whitney U test was used to compare the quantitative data of 2 independent groups without normal distribution. Pearson chi-square and Monte Carlo simulated chi-square tests were used to compare qualitative data of the 2 independent groups. P < .05 was considered to be statistically significant.

With improvements in surgical techniques and immunosuppressive treatments for solid-organ transplant, the demand for solid organs has grown, leading transplant surgeons to improve ways to recover multiple organs from deceased donors. Starzl and associates first defined the surgical technique for multiple organ procurement.7 To date, there is a lack of consensus for a standardized technique for every aspect related to multiple organ procurement.8 Although various transplant centers may use different techniques, such as single or dual organ perfusion, dissection in cold or warm conditions, and single or en bloc organ removal, the same incision is mostly used. As far as we know, our study is the first to compare procedures without sternotomy for cases that do not require recovery of intrathoracic organs.5

Our aims in this study were 2-fold. First, we aimed to discover any possible differences related to the greater time involved from initial incision to cross-clamping time of the supraceliac abdominal aorta with SOPT (which requires sternotomy to open the thorax cavity). In our study, the mean cross-clamping time was 128.3 minutes for SOPT and 46.6 minutes for MSOPT, revealing the greater time for opening the thorax cavity (P < .001).

Our second aim of the study was to investigate any clinical effects associated with the significantly greater cross-clamping time between the organ recovery techniques. Most potential deceased donors require various inotropic and chronotropic medications to stabilize the circulation system and to provide optimum tissue perfusion until cross-clamping. Among these medications, dopamine, epinephrine, and norepinephrine result in splanchnic vasoconstriction to redirect circulation into vital organs and to preserve blood volume, which could reduce portal vein flow and thus result in ischemic injury to liver cells. In our study, we aimed to inspect results of ischemic injury and compared liver enzyme levels of recipients measured during postoperative days 1 to 3. All implant techniques were applied by the same surgery team. Our study revealed that there were no significant effects of stopping inotropic and chronotropic medications at a median of 78 minutes earlier on liver enzyme levels. This result could be interpreted as reduced exposure to these medications having no significant effect because of short half-lives, which may have occurred in our donor groups. This study design could be more suitable for renal transplant as kidneys are among the organs more prone to be affected by vasoconstrictor medications. However, our center has a relatively limited number of renal transplant donors, and kidneys are transplanted at various centers throughout our country. Therefore, any possible comments regarding renal transplant results are limited.

This study has some limitations. First was the significant difference in cross-clamping times. The sternotomy procedure lasted longer than expected in 5 patients in the SOPT group, resulting in a prolonged median cross-clamping time in the SOPT group. The second limitation was the organ recovery team’s lack of experience in using the sternotomy device. Toward the end of the study period, the duration was reduced by 20 to 25 minutes. Another limitation was the study’s retrospective design and inclusion of only liver transplant patients. Therefore, our results must be interpreted with caution.

Although the MSOPT reduced cross-clamping time, there were no effects on postoperative results. Because of its reduced operation time, MSOPT is suitable for procedures in which thoracic organs are not targeted for retrieval. Further prospective studies are needed to study other abdominal organs. 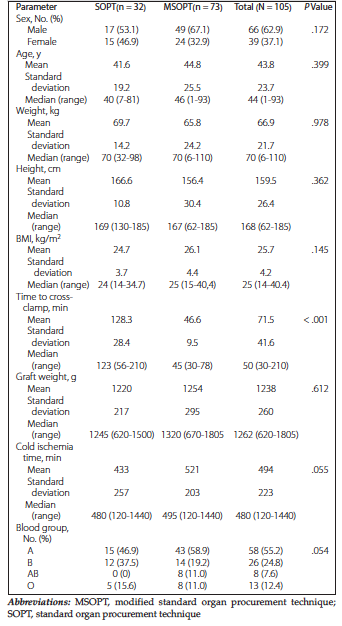 Table 1. Comparison of Groups in Terms of Demographic and Clinical Parameters

Table 2. Comparisons Between Groups in Terms of Liver Function Tests for Recipients During First 3 Days Posttransplant