Materials and Methods: We retrospectively reviewed computed tomography-guided percutaneous kidney transplant biopsies in patients undergoing work-up for kidney allograft rejection between 2013 and 2017. Demographics, comorbidities, laboratory data, history of antiplatelet and/or anticoagulant use, and com-plications were assessed.

Results: During the study period, 28 patients underwent computed tomography-guided percutaneous kidney transplant biopsies; mean age was 57.5 ± 15.5 years, and 12 (43%) were women. Twenty-three patients (82%) were obese, with a body mass index greater than 30 kg/m2. Our cohort of kidney transplant recipients included 21 (75%) from deceased donors and 7 (25%) from living-related donors. At the time of biopsy, 6 patients (21%) had elevated blood pressure (defined as > 160/90 mm Hg). One patient had severe com-plications, which included a significant decrease in hemoglobin requiring transfusion and a perinephric hematoma with worsening renal function. This was a morbidly obese patient whose blood pressure was elevated at the time of biopsy with a platelet count of 93 × 103/mm3 and international normalized ratio of 1.21.

Conclusions: A computed tomography-guided percu-taneous kidney transplant biopsy is a safe and effective alternative to obtain kidney tissue in the obese population and is associated with low rates of complications. In this study, we highlighted the need to achieve adequate blood pressure control and assess bleeding risk factors, such as platelet count and international normalized ratio, prior to biopsy.

One of the major indications for obtaining tissue biopsy of a transplanted kidney is in the setting of acute and/or chronic rejection.1 Kidney transplant rejection can manifest in various ways, including an elevated donor-specific antibody level, proteinuria, hematuria, uncontrolled hypertension, edematous states, and/or worsening renal function.2,3 When suspicion arises, it is essential and dire to determine whether the kidney allograft is being rejected. Currently, the leading indication for a kidney transplant biopsy is in ruling out rejection; however, protocol biopsies of transplanted kidneys are also done to identify subclinical allograft dysfunction.4,5

Percutaneous kidney transplant biopsy (PKTB) has evolved over the years; with the evolution of imaging tools, histologic samples can be obtained with the guidance of fluoroscopy, ultrasonography (US), or computed tomography (CT).6-10 In the transplant population, the US-guided approach is the most commonly preferred method due to its ease of use, low cost, and lack of ionizing radiation.1 On the other hand, in patients in which the use of US may be technically challenging, such as in patients with an elevated body mass index (BMI), an alternative is using CT-guided PKTB, which offers the advantage of superior resolution imaging and better localization of the allograft kidney of interest. In addition, the CT technique is much less operator dependent than US, which has a significant learning curve with a potential to ultimately affect the final imaging results.11 This in turn not only puts patients at risk for complications during the procedure, but, if an inadequate tissue sample is obtained, patients may require repeat biopsy, which again further increases the risk for complications. There have been controversial findings concerning this theory. On one hand, CT guidance was determined to be superior to US guidance in native kidney biopsies when considering the number of glomeruli obtained, as it increases the accuracy of diagnosis and decreases the need for repeat biopsy.12 On the other hand, a large retrospective study examining the yield of PKTBs based on various different factors concluded that CT- and US-guided PKTBs provided comparable tissue quality, allowing a sufficient diagnosis and with no significant differences in the rate of repeat biopsy.13 It is essential for us to determine which modality offers the best visualization in order to, in theory, reduce the rate of complications associated with this procedure.

The local institutional review board at the University of Miami Miller School of Medicine reviewed and approved this retrospective study.

We searched the kidney transplant database of our department of pathology to identify patients who underwent CT-guided PKTB to rule out allograft rejection between January 2013 and December 2017. Exclusion criteria included patients younger than 18 years old, native kidney biopsies, US-guided biopsies, and CT-guided focal/targeted mass biopsies. All patients underwent standardized preprocedural laboratory testing, and the biopsy procedure was held if the international normalized ratio (INR) was > 1.5 or platelet counts was < 50 × 103/mm3. If patients were on anticoagulation or antiplatelet therapy, this therapy was discontinued at least 5 days before the procedure. All biopsies were performed by interventional radiologists under CT guidance using a coaxial approach, which has been shown to increase the diagnostic yield and improve standardization of sampling.18 The coaxial technique features a needle course paralleling the outer capsule of the kidney on either a longitudinal or sagittal view progressing through the cortex approximately one-third the distance from the outer capsule to the sinus fat with the tip of the needle directed away from the renal hilum (Figure 1). In fact, with the coaxial approach, needle repositioning is not needed, thus potentially decreasing both procedure time and patient discomfort postprocedure.

Patients were placed in a supine position with the transplanted kidney of interest positioned in the right or left lower pelvis. All biopsies were performed using standard sterile technique and local anesthesia; subsequently, an 18-gauge core biopsy gun was advanced into the renal cortex, and samples were obtained. All tissue samples were sent to pathology for analyses. After the procedure, all patients were monitored for at least 4 hours with complete blood counts, macroscopic evaluation of the urine, and close nurse monitoring in our specialized kidney transplant unit. Patients with signs or symptoms concerning for biopsy-related complications, including a significant decrease in hemoglobin levels, severe flank pain, otherwise unexplained hypotension, hematuria, and large skin hematoma, underwent urgent imaging to rule out complications.

Variables collected and analyzed included demographic data, etiology of chronic kidney disease, BMI, blood pressure at the time of biopsy, creatinine levels before and after biopsy, BUN, INR, platelet counts, history of antiplatelet and/or anticoagulant agent use, type of transplant, trans-plant location, date of transplant, date of biopsy, indication for biopsy, number of core biopsies taken, and desmopressin and/or steroid use prior to biopsy. Any kind of imaging involving the transplanted kidney performed after the biopsy was also reviewed to monitor for complications. Pathology reports were reviewed to investigate the degree of fibrosis and the presence of BK virus as possible contributing factors for the development of complications.

In our cohort, 50% were on antiplatelet therapy and 10 patients (35.7%) were on anticoagulation at the time of admission. Both therapies were held before the procedure, with only 3 patients (10.7%) requiring desmopressin therapy preprocedure. Seventeen patients (61%) received high-dose steroids prior to the biopsy as part of the management for allograft rejection. At the time of biopsy, the mean platelet count was 201 ± 102 × 103/mm3, and mean INR was 1.0 ± 0.26. The average BUN and creatinine levels were 56 ± 25 mg/dL and 3.70 ± 3.0 mg/dL, respectively. Patient demographics of our cohort are further summarized in Table 1.

The most frequent indication for biopsy was due to a rise in creatinine in 23 patients (82%), followed by proteinuria in 5 patients (18%), and due to the presence of donor-specific antibodies in 1 patient (3.6%). The mean number of core biopsies obtained was 3.79 ± 2. There were only 3 cases (10.7%) of BK virus biopsies using DNA polymerase chain reaction. An 18-gauge needle was used in all biopsies; all tissue samples obtained were adequate for diagnoses. Biopsy results are further summarized in Table 2.

Of 28 patients, only 1 patient (3.6%) experienced severe complications postprocedure. This patient developed perinephric hematoma, which led to worsening renal function and decline in hemoglobin levels requiring transfusion (Figure 2). The patient was an 81-year-old man with uncontrolled hyper-tension, BMI of 36.6 kg/m2, and deceased-donor kidney transplant in the left iliac fossa who had a biopsy performed due to a rise in creatinine, thus concerning for acute rejection. At the time of biopsy, blood pressure was greater than 160/90 mm Hg, with creatinine level of 2.6 mg/dL, BUN of 73 mg/dL, INR of 1.21, and platelet count of 93 × 103/mm3. Before the biopsy, the patient was on anticoagulants, which were held to achieve an INR of < 1.5. Biopsy was performed with an 18-gauge needle, and 4 core biopsies were obtained, revealing negative BK virus using DNA polymerase chain reaction and mild degree of fibrosis as shown in the histopathologic report.

In evaluations of allograft kidneys, whether for a protocol biopsy or for suspicion of rejection, US guidance is the criterion standard for obtaining tissue for histologic diagnosis. However, US is limited by several factors, including its dependence on the expertise and skills of the operator as well as patient variables that could render the modality technically challenging. The obese transplant population is of particular concern, as US imaging may provide subpar visualization of the allograft kidney in such body habitus, thereby rendering the patient at higher risk of developing complications and needing rebiopsy to determine a diagnosis.

It is estimated that 36.5% of the population in the United States is obese.19 Over the past several decades, obesity rates have increased exponentially across all population groups in the United States.20 By 2020, it is predicted that up to 75% of the American population will be overweight or obese.21 Thus, the implementation of novel techniques to safely obtain kidney tissue in both native kidneys and transplanted allografts has become fundamental in the morbidly obese patient. This has been evaluated in the native kidney; however, there is a lack of studies assessing complication rates and associated risk factors in kidney transplant populations. To our knowledge, this is the first study to describe the outcomes of CT-guided PKTB and to assess the risk factors of this technique.

Computed tomography-guided PKTB has been shown to be a safe alternative technique to obtain kidney allograft tissue in morbidly obese transplant patients or in other situations where US-guided PKTB is technically difficult.9,10,12,13 Our cohort had a low rate of complications, comparable with previously reported US-guided and CT-guided percutaneous kidney biopsies in the native kidney population. Arguably, it could potentially be deemed a safer technique given the fact that patients selected for the CT-guided technique, based on their demographics and preexisting conditions, most likely have more comorbidities than the general transplant population undergoing these biopsies with US guidance. As mentioned in previous studies on US-guided biopsy outcomes, we highlight the need to achieve adequate blood pressure control and to assess bleeding risk factors such as platelet count and INR prior to the biopsy.16,22 Biopsy procedures should be postponed if INR is > 1.5 and/or platelet count < 50 × 103/mm3, unless it is an emergency; if an emergency, then platelet transfusion would be warranted.22 The risk of bleeding in the obese population has been previously studied; in a large cohort undergoing cardiac procedures, despite a procoagulant hemostatic state described in obesity, obesity was not associated with risk of bleeding.23

In our cohort, only 1 patient had complications after CT-guided PKTB. This patient had significant preexisting comorbidities, including stage 2 hypertension and uncontrolled hypertension at the time of the biopsy, significant uremia and throm-bocytopenia, and chronic use of anticoagulants with mildly elevated INR at the time of biopsy. Complications in this patient included a significant drop in hemoglobin, defined as > 2 g/dL within 6 hours of biopsy, which required transfusion in the setting of a large perinephric hematoma associated with worsening renal function. Based on our parameters, these qualified as severe com-plications.

Computed tomography-guided PKTB is a viable alternative to the more familiar US-guided approach in kidney transplant recipients undergoing work-up for kidney allograft dysfunction as evidenced by our retrospective observational study. It is a safe technique for obtaining kidney tissue, including in the obese transplant population, and is associated with low rates of moderate and severe complications, along with a high yield of successfully obtaining an optimal kidney sample. The main disadvantage of the CT-guided approach is radiation exposure compared with the use of US. We highlight the necessity to achieve adequate blood pressure control and to assess bleeding risk factors before biopsy in order to reduce or avoid complications. 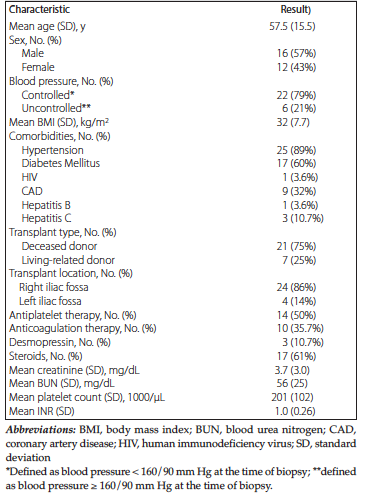 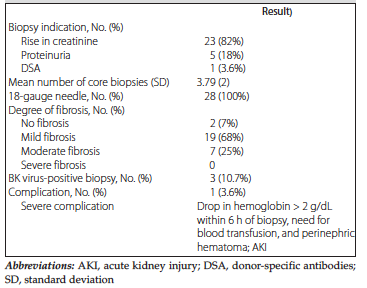