Objectives: Living-donor nephrectomy is a devoted procedure performed in a healthy individual; for these procedures, it is essential to complete the surgery with the lowest possible risk and morbidity and allow donors to regain their normal daily activity. To minimize anatomic and physiologic damage, we modified a surgical technique. Here, we report our experiences with the new anterior less invasive crescentic donor nephrectomy technique.

Results: During the operation, the new cresentic incision living-donor nephrectomy allowed a safe and comfortable position for the patient and the anesthesiologist. Also, it procures safe access especially for grefts with multiple vessels. Patients had lower pain scores (P = .010), shorter hospital stays (2.25 vs 3.49 days) than those who received the classic open living-donor nephrectomy. Patients who received laparoscopic living-donor nephrectomy had significantly longer mean operation time (P = .016) and warm ischemia time (P ≤ .001) than those who had the new cresentic incision technique. All groups showed similar rates of first-year survival and delayed graft dysfunction.

Kidney transplantation (KT) is the standard treatment for patients with end-stage renal disease. Living donor KT has made a significant impact, with better short-term and long-term results than deceased-donor KT.1 Living donor KT has become more popular because of shorter cold ischemia times, increased 10-year graft and patient survival rates, decreased incidence of delayed graft function and acute tubular necrosis, and shorter wait list times. Because living-donor nephrectomy is a devoted procedure performed in a healthy individual, it is essential to complete the surgery with the lowest possible risk and morbidity and allow donors to regain their normal daily activity.1,2

The principle “primum non nocere” must be of utmost importance; that is, the donor must not be harmed during organ retrieval.3 Recently, like all other surgical techniques, living donor nephrectomy has evolved from the classical open technique to minimally invasive approaches. Laparoscopic living donor nephrectomy (LDN) has become an alternative to classic open living donor nephrectomy (CODN) in many centers in the world.4 Although LDN has advantages in postoperative recovery, LDN has peculiar disadvantages, such as complications related to endoscopic technique (emphysema, pneumomediastinum, pneumotoracs), longer warm ischemia time, short renal pedicle, higher urethral complication rate, tendency to avoid right donor nephrectomy due to increased complications on the right side, complications with grafts with multiple vessels, and higher cost.5,6 To minimize these potential risks, there have been many modifications to both CODN and LDN.1

With these considerations, we decided to minimize anatomic and physiologic damage and modified an anterior less invasive surgical technique, which we termed the “new crescentic incision living donor nephrectomy” (CIDN). In this study, we retrospectively compared our CIDN technique with the CODN and LDN techniques.

Patients and Methods
Since November 1975, we performed 3136 KTs (2420 living donor (77%) KTs, 716 deceased donor (23%) KTs) at our centers. According to our policy, a living donor candidate should be the relative of the recipient. We also do paired kidney exchange KTs for recipients who are sensitized to their donors or have ABO incompatible donors.

In this study, we retrospectively evaluated the medical records of 728 living donor nephrectomy patients; 224 CIDN, 431 CODN, and 73 LDN procedures that we performed since 2015 and who had been followed for 1 year. The study was approved by our local Ethics Committee (Approval KA20/109).

We also reviewed delayed graft function (need for dialysis within the first week after KT) and first-year graft survival rate in recipients.7 For first-year graft survival, we considered the “initial event” to be the precise time of transplant and the “end point event” to be at the end of the first year if the renal allograft was diagnosed to be completely and irreversibly nonfunctioning as a result of any cause, including rejection and patient requirement to return to regular dialysis.8

Surgical techniques
For the CIDN technique, donors are positioned on their back, with only a slight turn to the opposite side. Figure 1 illustrates this position, which is more comfortable and safe for the patient,anesthesiologist and the surgeon as well. The incision begins 2 cm subcostal and approximately 10 cm away from xiphoid, forming at most a 10-cm curve (moving out toward the lateral and then back inward to the midsection). To procure minimal anatomic damage, retroperitoneal access is achieved through the lateral side of the rectus fascia by cutting the fasciae of the muscle layers without cutting any muscle fibers as presented. After dissection of the ureter, both the renal vein and artery are isolated and the kidney is separated from the Gerota fascia.

For the CODN technique, donors are placed in the lateral position with the table flexed at the 12th rib; this position is neither comfortable nor safe for the patient and anesthesiologist. A lateral oblique incision is made directly inferior to the 12th rib, and retroperitoneal access is achieved through cutting of all 3 muscle layers. After dissection of the ureter, both the renal vein and artery are isolated and the kidney is separated from the Gerota fascia.

For the LDN technique, we used a transperitoneal laparoscopic approach, which begins by positioning the donor in a flank position, at nearly the same position as with CODN. A camera enters the abdomen through a 10-mm trocar with the incision made in the umbilicus using Hasson’s technique, and dissection is done with 2 additional 5-mm trocars. After dissection of the ureter, both the renal vein and artery are isolated and the kidney is separated from the Gerota fascia. LigaSure is used for dissection. With the use of a 15-mm trocar, a white stapler (30/2.5) is used to control the renal artery and vein after the ureter is cut at the level of common iliac artery. The kidney is extracted through an additional 8- to 10-cm inguinal incision.

Statistical analyses
Data were analyzed with SPSS software version 25.0 for Windows (SPSS Inc., Chicago, IL, USA). All continuous data are expressed as means ± standard deviation and were analyzed by unpaired t test. Intergroup comparisons of normally distributed data were performed using t test, and nonnormally distributed data were evaluated using Mann-Whitney U test. The Kruskal-Wallis nonparametric test was used when there were more than 2 independent samples. Means were compared with one-way analysis of variance. The chi-square test was used to analyze categorical variables. Univariate and multivariate logistic regression analyses were used to evaluate odds ratio of various parameters associated with increased risk.

We determine the better functioning kidney based on results of nuclear scans, and evaluate the vascular anatomy with computed tomography scans. Finally, for the donor safety the less functioning kidney is recovered for transplantation. According to these results, the right kidney was more frequently used than the left kidney in CIDN and CODN compared with LDN (87% and 63% vs 17%, respectively).

Living donor nephrectomy is a devoted procedure performed in a healthy individual; therefore, it is imperative to maintain the lowest possible risk and to avoid morbidity to allow donors to regain their normal daily activity.1,2 Overall complication rates for CODN are reported to be between 3% and 38%, and significant differences have not been shown between CODN and LDN with regard to overall complications rates6. To minimize all potential risks and to achieve ideal results, modifications have been made to both the CODN and LDN techniques7, including our modified and less invasive surgical technique to minimize anatomic and physiologic damage (CIDN).

Patients who have LDN tend to have shorter hospital stays, faster recovery, and less pain but longer warm ischemia time; the technique is also much more expensive than CODN. Advances in LDN have resulted in the development of minimally invasive open donor nephrectomy techniques, which are reported to have the same results as LDN in terms of recovery and cosmetics. In addition, these minimally invasive techniques were reported to be more cost effective and safer than LDN, with considerably shorter warm ischemia time.1,3,7,8 Our results also confirmed this, and we showed that CIDN had shorter operation time and warm ischemia time than LDN. We recovered a total number of 57 grafts with multiple vessels; 19 CODN (19/431; 12 right, 7 left), 36 CIDN (36/224; 33 right, 3 left), 2 LDN (2 left) were done successfully for grafts with multiple vessels.

Postoperative pain is reported to be much higher in CODN due to an uncomfortable lateral decubit position during surgery and horizontal incision just below the rib, reaching the retroperitoneal area through cutting of muscle fibers.9 In CIDN, the patient is positioned on the back with a slight turn. This allows a safe and comfortable position during surgery without cutting any muscle fibers and with reduced postoperative pain as presented in Figure 1.

Early studies have raised concerns of new complications associated with LDN.4 In a systemic review, graft losses were reported because of technical problems after LDN.4 Reported complications included rupture of the graft during manipulation, inadvertent capsulectomy, grade IV renal parenchymal laceration, and extensive vascular injury that could not be successfully reconstructed.4 These complications thus make safety of the graft questionable in some LDN cases. The LDN approach poses another problem, which is the presence of an early (1-1.2 cm) bifurcation of the main renal artery, making it perhaps impossible to remove the renal artery with 1 ostium using laparoscopic instruments. Therefore, 2 anastomoses or a branch reconstruction is required in the recipient. At times, this is not a trivial task, and it carries a greater risk of complications that would not exist if the kidney was removed using the open approach.5 With this in mind, CIDN can be an effective alternative for LDN to ensure the safest manipulation in surgery, especially for grafts with multiple vessels, as presented in Figure 2 and Figure 3.

Another issue is obesity, which has been shown to be significantly associated with overall morbidity in LDN. In patients with BMI > 30 kg/m2, the rate of complications has been reported to be 2.82 times higher than for patients with BMI < 30 kg/m2.8 We suggest having a risk assessment system for LDN patients. However, for high-risk patients and the high risk of complications by LDN to undergo open surgery, our CIDN approach offers an effective and safe choice.

With CIDN, we aimed to provide a more comfortable and safe position for the donor and the anesthesiologist during surgery. With this technique, we can reach the retroperitoneal area through cutting the fasciae of muscle layers instead of muscle fibers. In our comparison of CIDN versus CODN, CIDN allowed an earlier recovery and lower postoperative pain scores, similar to LDN. Changing the abdominal incision did not alter the operation time or intraoperative complications. Even with the presence of anatomic variations (such as multiple arteries and veins), neither an enlarged incision nor a change in surgical access was needed because organ preparation could be accomplished successfully with brief warm ischemia time as presented in Figure 3. 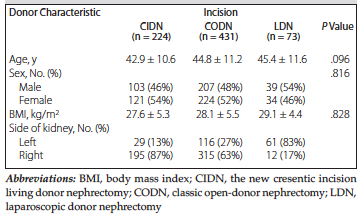 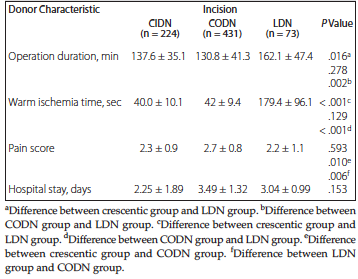 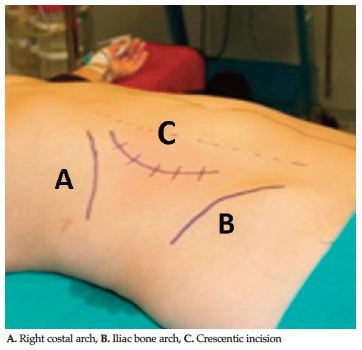 Figure 1. New Crescentic Incision Living Donor Nephrectomy Procures a Safe and Comfortable Position for the Patient and the Anesthesiologist and Easy Manipulation for the Surgeon 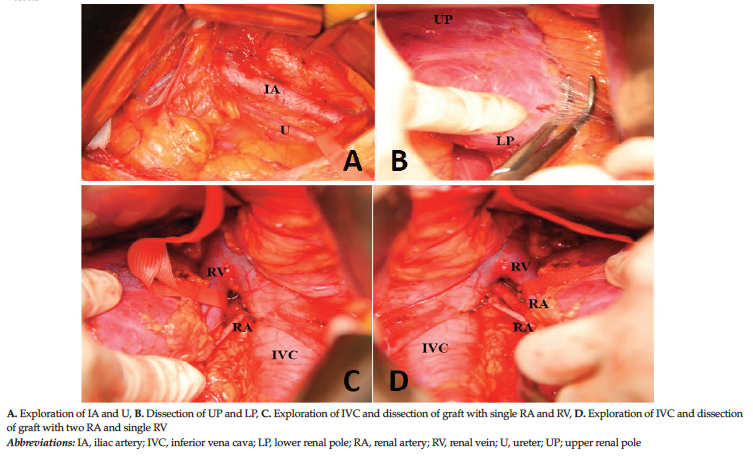 Figure 2. New Crescentic Incision Living Donor Nephrectomy Procures Ideal Exploration and Easy Manipulation for the Surgeon Even for the Grafts With Multiple Vessels 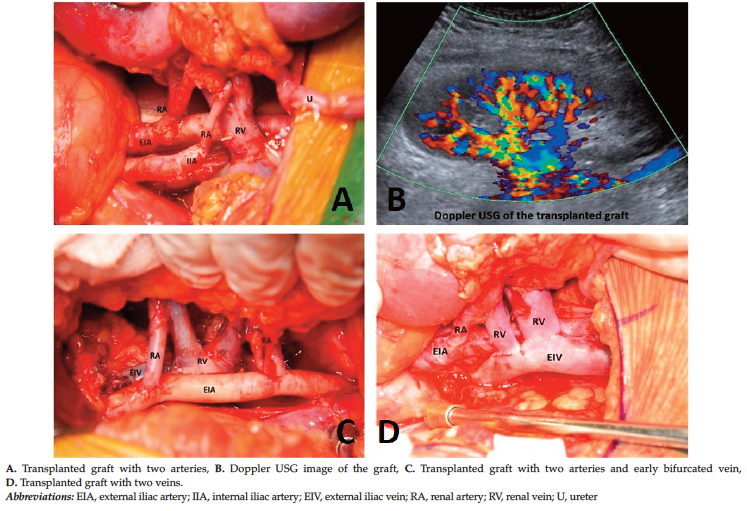