Objectives: Our goal was to investigate the safety and efficacy of the Boari bladder flap procedure in patients who received either allogeneic or autotransplant of kidneys.

Materials and Methods: We retrospectively reviewed the medical records of all patients with either allogeneic or autotransplant of kidneys who also underwent Boari bladder flap procedures between January 2007 and January 2018. Boari bladder flap was preferred in management of ureteral com-plications after allogeneic renal transplant or it was combined with renal autotransplant when ureteral length was not sufficient to allow ureterovesical anastomosis in patients with ureteral injury.

Results: Boari bladder flap procedures were performed in 14 patients who had undergone heterotrophic renal transplant. Nine patients had undergone allogeneic renal transplant, and 5 patients had renal auto-transplant. The mean age of patients was 41.7 ± 13.4 years. The 5 patients with renal autotransplant procedures had simultaneous Boari flap procedures due to ureteral avulsion during retrograde ureter-orenoscopic surgery for urolithiasis. For the entire cohort, mean preoperative and postoperative (at month 1) serum creatinine levels were 1.42 ± 0.71 and 1.13 ± 0.43 mg/dL, respectively. At last visit, the mean creatinine level was 1.94 ± 1.88 mg/dL.

Conclusions: The Boari bladder flap procedure can be a safe and relevant choice in the management of challenging complications after heterotrophic (either allogeneic or autotransplant) renal transplant, allowing minimally invasive urologic surgery, no need for use of bowel segments, and no potential risk for the contralateral kidney.

The incidence of ureteral complications after kidney transplant of either urinary leaks or ureteric obstruc-tion is 3% to 8%. Early diagnosis and relevant treat-ments are crucial, as these complications could lead to renal graft dysfunction or loss or even recipient loss.1,2

Renal autotransplant was first described by Hardy in 1963 with the treatment of a high ureteric injury by reimplantation of the repaired kidney into the ipsilateral iliac fossa.3 Currently, renal auto-transplant is used for surgical management of complex ureteral injuries, nephrolithiasis, renal artery aneurysms, renovascular hypertension, and renal malignancy.4

The Boari bladder flap procedure was first described by Achille Boari in 1894 in animals. In 1936, Dr. Ockerblad performed this operation in a patient for repair of severe lower ureteric injury following hysterectomy. Over the decades, this procedure has been widely used for ureteral reconstruction. It has many advantages over other reconstructıve techniques. These advantages include it not having any affect on the ipsilateral renovascular system and contralateral ureter, the use of the normal urinary tract, and its ability to be performed in a wide range of patients, including those with decreased renal function, stones, or ileal diseases.5

In this study, we aimed to investigate the safety and efficacy of the Boari bladder flap in patients who had either allogeneic transplant or autotransplant (heterotrophic) of kidneys.

Study parameters included patient demograph-ics, cause of ureteral damage, length of hospital stay, postoperative complications and interventions, creatinine levels before and after surgery, and post-operative radiologic and nuclear imaging findings.

Surgical techniques
The Boari bladder flap procedure was performed using an open surgical approach via the modified Gibson incision. Patients were placed in a supine position. The dissection proceeded downward and medially toward the Retzius space to identify the ureter and/or ureterovesical junction (in transplant patients) and to mobilize the urinary bladder.

After the urinary bladder was filled with 150 mL of saline, an anterior rhomboid-shaped bladder flap (Figure 2) was created. A 4.8F, 16-cm double-J stent was inserted into the kidney, and the rhomboid-shaped bladder flap was rolled anteriorly and closed over the stent (Figure 3) in a 2-layer fashion (one mucosa to mucosa, one detrusor to detrusor) using 4-0 and 5-0 polydioxanone running sutures subsequently to obtain a tubularized flap (Figure 4). The bladder flap was anastomosed to the renal pelvis in all autotransplant procedures due to ureteral avulsion because of the extended damage in the ureter. For the remaining transplant recipients, it was anastomosed to the healthy ureter after spatulation of the necrotic ureteric tissue by interrupted sutures. The urinary bladder was closed with 3-0 running polyglactin sutures. The urethral catheter and double-J stent were removed on day 14 and during weeks 6 to 8 after the procedure, respectively.

Follow-up procedures
Patients were followed with urinary ultrasonography and analyses of blood urea nitrogen and creatinine levels at 1 and 3 months after surgery and then yearly. Radionuclide scintigraphy and magnetic resonance urography were used in cases when obstruction or decreased graft function was suspected.

Complications after allogeneic renal transplant included ureter necrosis and anastomosis stenosis, urine leak, and vascular anastomosis stenosis. Minimally invasive management by means of either antegrade or retrograde balloon dilatation and nephrostomy was not successful. Of the 5 renal autotransplant patients, simultaneous Boari flap procedures were conducted due to ureteral avulsion during retrograde ureterorenoscopic surgery for urolithiasis (Table 1). Two of those patients had undergone laparoscopic nephrectomy, and the others received nephrectomy with open technique.

Two patients died within 4 months after the surgery, with causes not related to the procedure (coronary artery disease and lung cancer). The other 12 patients had a mean follow-up of 35.2 ± 29.2 months (range, 1-83 mo) without any complications except for the aforementioned patient.

The Boari bladder flap procedure has been used for ureteral reconstructions since the 1940s. However, few studies in the literature have detailed the outcomes. Most of these studies are encouraging and have confirmed the safety and feasibility of this procedure.5-7 To the best of our knowledge, there are no data in the literature regarding the Boari bladder flap after heterotrophic renal transplant, including autotransplant.

With the extended use of ureteroscopes and endoscopic stone surgery, ureter complications rates have grown. The frequency of complications can range from 0.5% and 10%. The most serious complication is ureter avulsion, with an incidence of 0.06% to 0.45%. Treatment of avulsion is a challenging issue for urologists.9,10

The main surgical principle in ureter recon-struction is creating urinary tract continuity with tension-free anastomoses.11 In addition, the main goal is the long-term preservation of renal function.12 Different approaches could be chosen depending on the defect length and side. Ureteroureterostomy or ureteroneocystostomy may be adequate for short and uncomplicated ureteral defects, whereas trans-ureteroureterostomy, ileal interposition, Boari bladder flap, and autotransplant may be required in cases of extensive ureteral defects.13,14

Each of the various techniques has advantages and disadvantages. An immediate ureteroureterostomy may be feasible for short ureteral defects that are recognized intraoperatively. For secondary repair of a distal ureteral defect, an extraperitoneal uretero-neocystostomy could be an option.15 Transure-teroureterostomy may be the treatment of choice in ureteral defects above the pelvic rim when performing a ureteroureterostomy is not possible.14 An ureterocalicostomy might be used in cases of proximal ureteral injury or stricture, in which the renal pelvis is not appropriate for anastomoses due to extended damage, presence of intrarenal pelvis, or scarring.16 The use of intestinal segments for ureteral reconstruction might be considered as a last resort if other techniques that do not use bowel segments have been assumed to be improper or have not been successful.15 Various success rates and complications have been reported in a small case series.17 Reported complications consist of urinary tract infections, hyperchloremic metabolic acidosis, incisional hernia, fistulas, anastomotic strictures, urine leak, mucous plugging, and small bowel obstruction.18

In allogeneic renal transplant patients who undergo total or long-segment ureteral recon-struction, pyelovesicostomy or use of the native ureter could be considered. However, when it is not possible to mobilize the transplanted kidney or the native ureter is abnormal, short, absent, or nonfunctional, the Boari flap procedure emerges as an alternative technique. The use of the Boari flap has been rarely indicated for ureteral reconstruction in renal transplant patients.7,8

The Boari bladder flap has some advantages over the aforementioned techniques; these advantages include using only the normal urinary tract, not jeopardizing the ipsilateral renovascular unit or contralateral ureter, and the ability of performing this procedure in cases of impaired renal function, urinary stone disease, or ileal disease.5 It is a choice for ureteral reconstruction when it is not possible to mobilize the urinary bladder to the renal pelvis or to the healthy ureter or when the native ureter is not available.7

In our series, an ileal interposition was deemed to be the sole alternative to the Boari bladder flap in patients with ureteral avulsion due to extended damage involving the renal pelvis. However, we preferred autotransplant combined with Boari bladder flap to refrain from the potential comp-lication related to ileal interposition, relying on our great institutional renal transplant experience. In addition, we found that ureteroureterostomy or transureteroureterostomy could result in ureter necrosis and in ureter avulsion. In allogeneic renal transplant patients, finding either the native ureter or the transplanted kidney’s ureter was challenging due to stiffness of adjacent structures. However, in some patients, a healthy length of ureter was still insufficient to perform an ureteroureterostomy or ureteroneocystostomy. Therefore, we decided to perform a Boari bladder flap.

According to our experience, a Boari bladder flap is a feasible technique for ureteral reconstruction in both allogeneic transplant and autotransplant recipients of kidneys. With this technique, there is no need to explore the native or entire transplanted ureter by means of a challenging dissection, allowing maximum attention for preservation of the transplanted vessels. The formed Boari bladder flap can be easily anastomosed to the visible ureter or renal pelvis. Creating mucosa-to-mucosa anasto-moses between the Boari bladder flap and the ureter/renal pelvis is of vital importance and has a great impact on surgical outcomes.

In our patient cohort, the vast majority had excellent surgical outcomes (only one did not). That patient developed hydronephrosis due to Boari bladder flap anastomoses stricture, which led to serial ureteral stent insertions and then return to renal replacement therapy.

Acceptable surgical outcomes and renal function preservation were achieved in our patient cohort with Boari bladder flap after heterotrophic (either allogeneic or autotransplant) renal transplant. The Boari bladder flap procedure can be a safe and relevant choice in the management of challenging complications after either allogeneic transplant or autotransplant of kidneys, allowing minimally invasive urologic surgery and no need of use of bowel segments and no potential risk to the contralateral kidney.

From Department of Urology, Hacettepe University School of Medicine, Ankara, Turkey
Acknowledgements: The authors have no sources of funding for this study and have no conflicts of interest to declare.
Corresponding author: Senol Tonyali, Hacettepe University School of Medicine, Department of Urology, 06230 Sihhiye, Ankara, Turkey
Phone: +90 312 3051969
E-mail: senoltonyali@hotmail.com 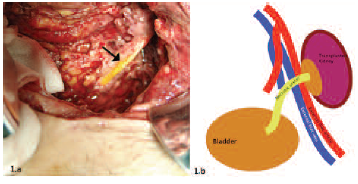 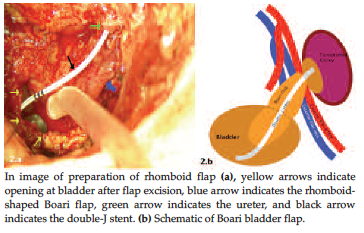 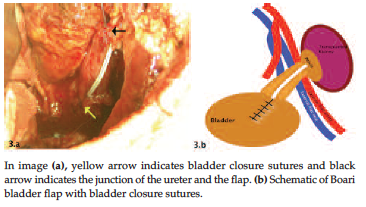 Figure 4. Appearance of Boari Bladder Flap After Completion of Procedure (black arrow; a) and Schematic (b) 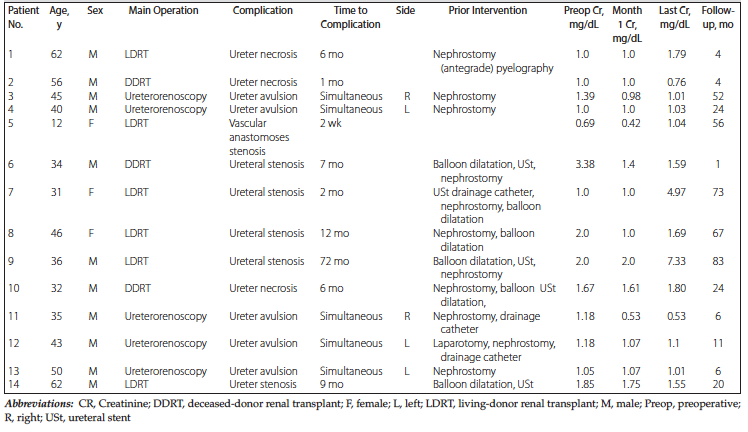