Materials and Methods: A randomized open-label study compared a group who received psycho­educational intervention (n = 55) with a control group (n = 55), with all patients being kidney transplant recipients in the Department of Nephrology and Organ Transplantation (University Hospital, Toulouse, France). Psychoedu­cational intervention comprised 8 weekly sessions provided by multidisciplinary teams. Patients were included between 2002 and 2003. The primary endpoint was allograft survival at 10 years (ie, by 2012). A failed allograft or death with a functioning allograft was considered an event.

Conclusions: After an initial 6-month observational adherence survey, there was no benefit to kidney allograft survival at 10 years after the psycho­educational intervention, which had aimed to improve patient adherence to treatment with immunosuppressive agents. This might be related to the fact that booster interventions are needed (eg, on a yearly basis).

However, nonadherence to immunosuppressive therapies occurs in 22% to 28% of kidney transplant recipients.4,5 This can cause acute rejection episodes6 and kidney allograft failure, mainly related to chronic antibody (donor-specific)-mediated rejection.6,7 The latter condition represents the cause of allograft failure in 16% to 36% of kidney transplant patients according to different studies.6,7 In addition, non­adherence has important economic consequences. In 2007, sixty thousand nine hundred French patients with end-stage renal disease were treated with supportive therapy. Of these, 30 900 were treated with hemodialysis (51%), 2600 (4%) with peritoneal dialysis, and 27 300 (45%) were kidney transplant recipients.8 The subsequent health cost of these patients is estimated at €4 billion per year; of this amount, hemodialysis patients account for 77% of this cost.8 Kidney transplant is a major economic alternative to hemodialysis; it has an estimated mean annual cost of €20 000 per patient (€86 000 in the first year) versus €89 000 per year for patients treated with hemodialysis.8

This was a randomized, open-label, two-armed study, in which psychoeducational intervention was analyzed versus standard care (control) in stable kidney transplant patients.14,15 Figure 1 shows a flow chart of the study. Participating patients were stable kidney transplant patients seen in the outpatient clinic at Toulouse University Hospital (Toulouse, France) by a single physician (LR), who included them in the study after checking that they met the inclusion criteria. Patients were included between 2002 and 2003. The inclusion criteria were as follows: stable kidney transplant patients, > 18 years old, received transplant within the previous 5 years, and without any cognitive or psychiatric disorders that were incompatible with the psychoeducational intervention. Informed consent was obtained from every patient. The study was approved by the hospital’s ethics committee.

The patients were randomized into 2 groups: a control group of patients who received standard care and a second group who received psychoeducational intervention. Randomization was performed with the use of sealed envelopes and a list of random numbers.

Study outline
Three evaluations were made during the study. The first was a global meeting of all patients within the study; during this meeting, 1 team member (NBD) explained the overall objective of the study. This meeting was followed by patients in the psycho­educational intervention group having their first psychoeducational intervention session. Patients from both groups completed 4 questionnaires at the first evaluation: a self-questionnaire on treatment adherence, a questionnaire on depression (the Beck Depression Inventory), a questionnaire on quality of life through the World Health Organization Quality of Life 26-item inventory,13 and a representation and knowledge questionnaire.

Nineteen questions were retrieved from this questionnaire, and we added others. Our adherence questionnaire was validated for the kidney transplant patients by NBD at 6 months after transplant.15 The adherence cutoff rate was defined as the median score of both groups at the week 8 evaluation.

Ten-year follow-up
The primary endpoint at 10 years was allograft survival. A failed allograft or patient death with a nonfunctioning allograft was considered an event. During this 10-year period, patients were seen in the outpatient clinic every 4 months. At every visit, serum creatinine and immunosuppressant trough levels were assessed. Biologic analyses were performed either in the hospital or in private laboratories. The targeted values for immuno­suppressant trough levels in these maintenance kidney transplant patients were as follow: 5 to 15 ng/mL for tacrolimus, 100 to 300 ng/mL for cyclosporine, 6 to 15 ng/mL for sirolimus, and 4 to 8 ng/mL for everolimus. At the 10-year follow-up, a questionnaire was sent to all living patients.

The time until allograft loss (primary outcome) was investigated through survival analysis and was represented by a Kaplan-Meier curve; a log-rank test was used to compare the groups according to graft survival at 10 years. Factors associated with allograft survival were investigated using Cox regression models. Age, sex, treatment, and other variables associated with the endpoint and with a P of ≤ .20 in the univariate Cox models or factors known to affect allograft survival as reported in the literature (eg, hypertension, diabetes, obesity) were included in the multivariate analyses. A backward, stepwise Cox proportional hazards model was used to select variables with a P value < .05 to be included in the final model. All of the analyses were done with SAS 9.3 statistical software (2011, SAS Institute Inc, Cary, NC, USA).

In our multivariate analyses, we did not find any predictors for allograft loss at 10 years posttransplant (Table 5). As a result of interaction with time, diabetic nephropathy could not be included in the Cox regression model.

To the best of our knowledge, this is the first prospective, randomized, controlled study to evaluate the long-term effects of psychoeducational inter­vention in de novo kidney transplant recipients. This intervention was implemented to see whether this approach could increase patient adherence to immunosuppressive regimens. We were unable to demonstrate a long-term clinical benefit; that is, this intervention had no significant effect on kidney allograft survival at 2, 5, and 10 years. However, in the group of patients who received psychoeducational intervention, the psychoeducational therapy was associated with improved treatment adherence after 6 months when it was evaluated according to the clinical scores.14 There are at least 2 reasons for this difference. First, the study was not initially planned for a long-term intervention and follow-up: after the initial psychoeducational therapy, there were no subsequent refresher sessions (eg, an annual refresher session). Therefore, the early benefit from our intervention may have been lost. Second, the initial number of randomized patients was not calculated to enable analyses of the significance of the long-term benefit of this intervention.

We also sent questionnaires at 10 years after the initial intervention to evaluate treatment adherence and quality of life. However, very few were returned, preventing statistical conclusions to be made. This showed that, when there was no ongoing protocol, the patients’ motivation to answer the questionnaire was very low.

We observed a very weak correlation between adherence, as assessed through the questionnaire, and adherence assessed in analyses of trough levels of immunosuppressive agents. This could question the validity of our adherence questionnaire. Some authors have evaluated intentional and nonintentional nonadherence. Investigators mostly found that (1) intentional nonadherence rate was low and (2) there was a strong divergence between adherence results found from patients’ questionnaires versus assessment using trough levels of immunosuppressive agents. When questioned, patients tend to overestimate their nonadherence (62.4%), whereas assessment of adherence using trough levels has shown a lower nonadherence rate (only 25.4%).16 These results are similar to those that we observed: we found nonadherence in 40.9% of patients when we used the questionnaire versus 14.6% when we used trough levels. This discrepancy highlights that we still lack robust tools to assess nonadherence, and the assessment of trough levels only evaluates the last intake of the immunosuppressive agents and not the regular intake of medications over time. Moreover, when a patient knows that blood tests will be performed the next day or that a medical appointment is planned, the patient will be more adherent to treatment during the days leading up to the appointment.

Most studies that have focused on patient adherence in the setting of kidney transplant have not examined the long-term effects (ie, they have not reported on long-term allograft survival). Although the factors associated with adherence have been well reported,17-20 those associated with allograft survival are less well documented.21 A monocentric study that analyzed the factors associated with graft function at 34 years after transplant found that diabetes, a high level of serum creatinine at 1 year after transplant, and a history of acute rejection all had negative effects on allograft survival. In our study, which was underpowered, the univariate analyses showed that only diabetes was significantly associated with allograft loss. However, in the multivariate analyses, we failed to find any predictive factors, despite taking many factors into account, including those reported as being the most important.

This same monocentric study also found that 5-year allograft survival was 82% in de novo kidney transplant recipients who were < 17 years old, 80% in those who were 18 to 49 years old, and 61% in those who were > 49 years old.21 In our study, the 10-year survival rate was 77.3%, which is similar to that from recent French registry data but was much better than data reported in a study initiated in 1967, a time when immunosuppressive agents were far less potent than today.

Adherence to immunosuppressive agents is of major importance, and there are many ways to improve it22-24; however, our long-term results do not indicate that psychoeducational interventions are associated with better outcomes.

In conclusion, this randomized controlled trial, which evaluated whether adherence was increased after psychoeducational intervention in de novo kidney transplant recipients, did not show a benefit in terms of allograft survival at 10 years, possibly due to (1) the range of factors that contribute to long-term attrition rate of the kidney allograft and (2) the need for iterative educational sessions to maintain patient awareness and interest. 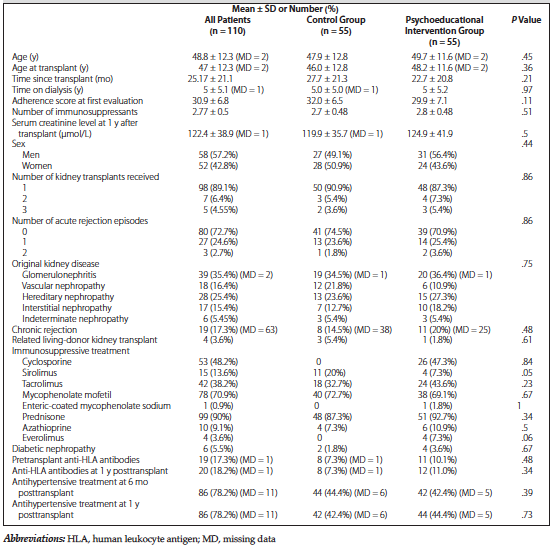 Table 1. Clinical Data at Baseline for Both Groups 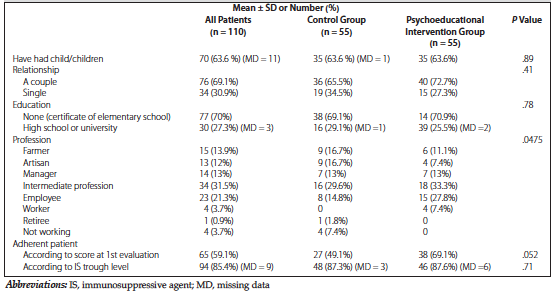 Table 2. Sociodemographic Data at Baseline for Both Groups 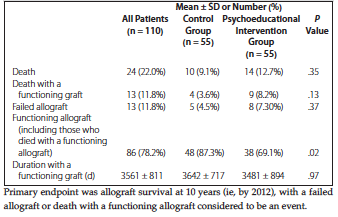 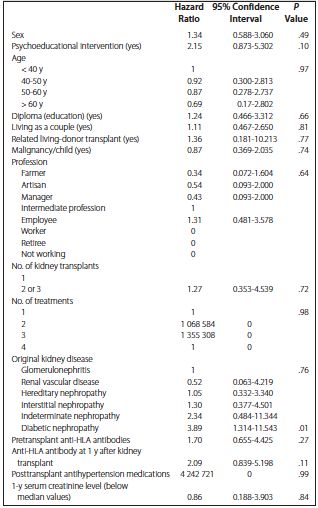 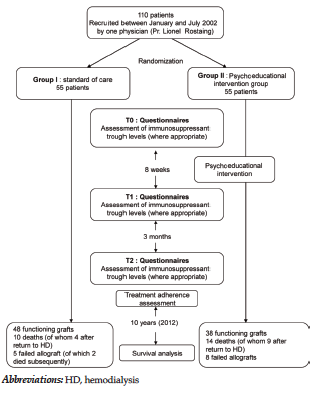 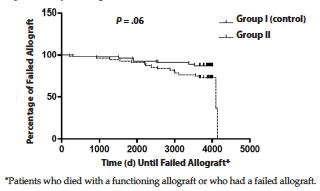