Materials and Methods: A single center retrospective case-control study was performed with kidney transplant recipients who were treated with allopurinol (54 patients) and a control group matched for time of transplant (± 3 months) and estimated glomerular filtration rate (54 patients). We evaluated the relation between allopurinol use and estimated glomerular filtration rate, graft survival, blood pressure, and number of anti-hypertensive drugs used.

Hyperuricemia is common in kidney transplant recipients. Prevalence of hyperuricemia has increased by 52% to 84% after the introduction of calcineurin inhibitors as the main maintenance immuno-suppressive drug. Hyperuricemia is associated with the progression of chronic kidney disease (CKD), hypertension, and cardiovascular disease in kidney transplant recipients.1-7 Uric acid is an independent risk factor for the development of functional decline of kidney allografts and chronic allograft nephropathy. Uric acid may cause kidney damage because uric acid impairs endothelial cell function, stimulates vascular smooth muscle cell proliferation, increases inflammatory markers, and activates the renin-angiotensin system.8,9

Allopurinol decreases uric acid levels by inhibiting the enzyme xanthine oxidase and is beneficial in slowing disease progression, reducing blood pressure, and decreasing cardiovascular risk in CKD patients. A 12-month case-control study in 54 patients who had stage 3 to 4 CKD showed that allopurinol therapy slowed progression of CKD.10 A 2-year prospective randomized trial in 113 patients who had estimated glomerular filtration rate (eGFR) < 60 mL/min/1.73 m2 showed a lower risk of CKD progression with allopurinol therapy.11 However, literature review showed no study that evaluated the effects of allopurinol in kidney transplant recipients.

The purpose of the present study was to evaluate the effects of allopurinol on allograft function (determined by measuring eGFR) and graft survival in kidney transplant recipients.

Patients
This study was a single-center retrospective review of 428 kidney transplants performed at our institution from 2003 to 2008. There were 54 transplant recipients who received allopurinol for treatment of gout, and these recipients were compared with 54 control patients who were matched for time of transplant (± 3 mo) and eGFR upon starting allopurinol. The primary outcome variable was eGFR and secondary outcome variables included graft survival, blood pressure control, and antihypertensive medication requirement. The study protocol was approved by the hospital Institutional Review Board. All protocols conformed with the ethical guidelines of the 1975 Helsinki Declaration.

Transplant
Kidney transplant recipients received induction with rabbit antithymocyte globulin, basiliximab, or alemtuzumab and maintenance with an immuno-suppressive regimen based on a calcineurin inhibitor (cyclosporine or tacrolimus) and mycophenolate mofetil (1 gm, oral, twice daily) with an early steroid withdrawal protocol (Table 1). Posttransplant infection prophylaxis against Pneumocystis, Listeria, Nocardia, and cytomegalovirus was started on all patients. Mycostatin swish and swallow was used for antifungal prophylaxis for 1 month after transplant and cytomegalovirus prophylaxis included valganciclovir.

Evaluation
Initial (when allopurinol was started) and follow-up data collected on patients who received allopurinol and control patients included serum uric acid and creatinine levels, eGFR, blood pressure measurements, and number of antihypertensive medications. The eGFR was determined with the Modification of Diet in Renal Disease Study Equation.7 Hyperuricemia was defined as serum uric acid level > 416 μmol/L (7.0 mg/dL) in men and > 357 μmol/L (6.0 mg/dL) in women. Data about the incidence of biopsy-proven acute rejection and trough levels of tacrolimus and cyclosporine at different times were collected.

Hyperuricemia is common in kidney transplant recipients. Elevated uric acid can develop as a result of increased production or diminished excretion. In CKD patients, decreased excretion of uric acid may cause hyperuricemia. Hyperuricemia may be an independent cause of all-cause mortality and increased cardiovascular disease in the general population.12-14 However, conflicting results were observed in studies that evaluated the association between uric acid and progression of CKD. In 5808 participants of the Cardiovascular Health Study, uric acid levels were associated strongly and linearly with kidney dysfunction, and this association was statistically significant after adjustment for multiple confounders.15 The risk of developing CKD increased by 1.7 (95% confidence interval, 1.6 to 1.8) for each 59.5 μmol/L (1 mg/dL) increase in uric acid level. Increased uric acid levels also are associated with progression of kidney disease.

In an evaluation of the association between hyperuricemia and long-term outcomes in 838 CKD patients, the highest quartile of uric acid (> 500 μmol/L [8.4 mg/dL]) was a risk factor for all-cause mortality but not for worsening of CKD.16 Similar results were observed in a study of 3033 patients who had stage 3 to 5 CKD; hyperuricemia was a risk factor for all-cause mortality and cardiovascular events.12 In the unadjusted model, there was significant association between uric acid quartiles and rapid progression of renal dysfunction or the need for renal replacement therapy, but the association was not significant in the adjusted model. In a study of patients who received peritoneal dialysis, hyperuricemia was negatively correlated with the rate of reduction of residual kidney function in multiple linear regression after adjusting for demographic data, comorbidities, body mass index, residual renal function at start of peritoneal dialysis, and medications.17

In 1645 patients in a multicenter, prospective study that evaluated the association of uric acid and renal function within 3 years after transplant, there was no association between uric acid levels and progression of allograft kidney dysfunction after correction for baseline kidney function.20 In another study of 307 adult patients after kidney transplant, risk factors for the development of hyperuricemia at 6 months after transplant included male sex, eGFR < 50 mL/min, use of diuretics, use of cyclosporine, and deceased-donor kidney transplant.21 Hyper-uricemia was associated with a significantly higher risk of developing cardiovascular disease and chronic allograft nephropathy in an unadjusted model, but the risk was not evident in a multivariate adjusted model.21 In contrast, another study showed that mean serum uric acid level during the 6 months after transplant was an independent risk factor that predicted graft failure (hazard ratio, 1.26; 95% confidence interval, 1.03 to 1.53; P ≤ .03).22

In the present study, allopurinol use was associated with lowering of serum uric acid levels, confirming that patients in the study group were taking allopurinol, and preservation of eGFR in kidney transplant recipients. The mechanism of the renoprotective effects of allopurinol is unknown. Hyperuricemia is associated with increased oxidative stress, endothelial dysfunction, inflammation, and proliferation, and allopurinol may minimize these harmful effects of hyperuricemia. In addition, allopurinol may have a favorable hemodynamic effect in increasing eGFR (Table 2).

Limitations of the present study include the small sample size and short follow-up. The retrospective study design may show association but not causation. The possibility of type 1 error cannot be excluded, and unidentified confounding factors may exist.

In summary, the present study showed an association between allopurinol use and preservation of eGFR in kidney transplant recipients but no measurable effects on blood pressure. This observation suggests a potential benefit of treating asymptomatic hyperuricemia in kidney transplant recipients. Larger prospective randomized trials with sufficient follow-up are needed to validate this observation. 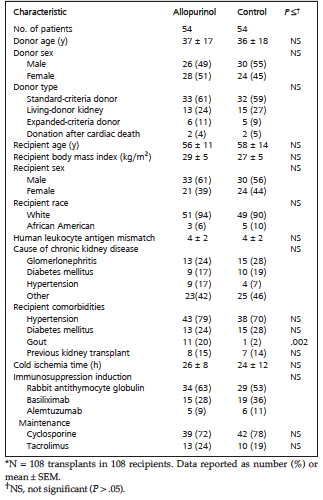 Table 1. Demographic and Clinical Characteristics of Patients Who Had Kidney Transplant* 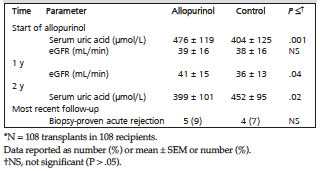 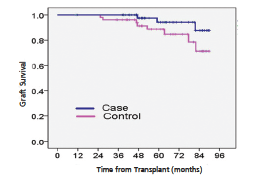 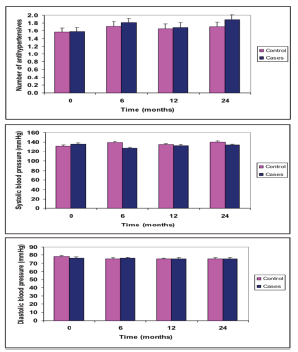 Figure 3. Parameters of Abnormal Blood Pressure at 0, 6, 12, and 24 Months After Kidney Transplant (differences between allopurinol and control groups, not significant)