Materials and Methods: Forty-one children were enrolled in this study. Dietary assessment was based on a semiquantitative food frequency questionnaire, consisting of 47 food items (including all commonly used prebiotic and probiotic foods in the Turkish cuisine), for the last week before hematopoietic stem cell transplant and a 24-hour dietary recall on admission.

Results: Thirteen girls (31.7%) and 28 boys (68.3%) comprised the study group. Of the 41 children, 5 (12.2%) were classified as underweight; 12.2% at risk of being underweight; 53.6% healthy weight; 9.8% overweight; and 12.2% obese. Nutritional status of the children had no effect on the complication rate, duration of febrile neutropenia, and the day of neutrophil and platelet engraftment. Correlation analysis revealed that there was a negative correlation between the day of neutrophil engraftment and the amount of soluble fiber, iron, breast milk, bazlama (a traditional yeast bread), and bulgur consumption. A negative correlation was detected between the number of febrile neutropenia episodes and the amount of yogurt and onion intake. Increased intake of parsley and onion was associated with reduced duration of total parenteral nutrition. The amount of parsley consumption was found to be lower in patients who experienced transplant-related complications.

Conclusions: The nutrient contents and nutritional habits of the patients may affect the course of transplant. It might be recommended that "let them eat yogurt, bazlama, bulgur, onion, and parsley."

Probiotic is defined as a living microbial food ingredient that is beneficial to health. Probiotics may have several beneficial functions, particularly in sick patients, including reduction or elimination of potentially pathogenic microorganisms of various kinds, toxins, mutagens, carcinogens, modulation of the innate and adaptive immune defense mechanisms, promotion of apoptosis after an immune-inflammatory attack, and release of numerous nutrients, antioxidants, growth and coagulation factors, and other factors necessary for recovery.9, 10 A prebiotic is a nondigestible food ingredient that beneficially affects the host by selectively stimulating the growth or activity, or both, of a limited number of bacteria in the colon (Bifidobacteria and Lactobacillus). Modulation of the microflora of the gastrointestinal tract can occur through diets that contain prebiotics and probiotics. The approach of using diet to induce microbial change offers an important approach toward improved health.11 Hematopoietic stem cell transplant is associated with substantial mucosal injury and changes in gastrointestinal flora, suppression of the immune system, immune dysfunction, severe hematologic disorders, and toxicity. It is suggested that nutritional factors may play a role in favorable modification of the immune system and the microbial flora in the transplant setting and perhaps, may influence transplant-related events. However, we found several published studies about the association of probiotic and prebiotic content of the diet with transplant-related events.12, 13

The aim of this study was to evaluate the effects of pretransplant energy and nutrient contents, nutritional habit (probiotic and prebiotic intake) and nutritional status (eg, underweight, obese) on the clinical outcome (the days of neutrophil and platelet engraftment) and the complications of hematopoietic stem cell transplant (veno-occlusive disease, graft- versus-host disease, and febrile periods).

Patients
Forty-one patients who were seen in the outpatient clinic of the Pediatric Bone Marrow Transplant Unit at our institution between June 2006 and June 2008 were voluntarily enrolled in this study. Written informed consent was obtained from all of the parents or subjects. All protocols were approved by the local ethics committee of the institution before the study began, and they conformed to the ethical guidelines of the 1975 Helsinki Declaration. The age and sex distribution, indications for hematopoietic stem cell transplant, and stem cell sources are shown in Tables 1 and 2.

Dietary assessment and management
Throughout the transplant period until neutrophil engraftment, a low-bacteria diet (neutropenic diet) was offered to all subjects. Education concerning appropriate food choices within the diet was provided to each participant throughout their hospitalization; no other dietary limitations were applied. From admission until hospital discharge, body weight was measured daily on an electronic digital scale that was accurate to 0.1 kg. Height was measured at admission by a stadiometer that was accurate to the nearest 0.1 cm. Body mass index (BMI) was calculated with the following formula: weight (kg)/height (m2). The BMI was assessed with World Health Organization 2007 Child Growth Standards charts.14 The patients were grouped into 5 categories: underweight, at risk of being underweight, healthy weight, overweight, and obese. These weight categories were in accordance with the cutoff points of below the fifth percentile, fifth to below the 15th percentile, 15th to below the 85th percentiles, 85th to below the 95th percentile, and above the 95th percentile.14, 15

Dietary assessment was based on a semiquantitative food frequency questionnaire, consisting of 47 food items (including all of the commonly used prebiotic and probiotic foods in the Turkish cuisine), for the last week before transplant and a 24-hour dietary recall on admission. Also, any change in dietary habits after hematopoietic stem cell transplant were asked about when the subjects were seen for follow-up. The Nutrition Information System (BeBis) Software program (EBISpro for Windows, Stuttgart, Germany; Turkish version BeBiS; using data from the Bundeslebens­mittelschlüssell 11.3 database and other sources) was used to assess the energy and nutrient intake of the subjects. Energy and nutrient intakes of individuals were compared with the dietary reference intake values.16 Intakes lower and upper than 33% of the dietary reference intake were considered as inadequate and over.16

Assessment of toxicity
Severity of oral mucositis was graded daily according to adapted common toxicity criteria for stomatitis in patients undergoing bone marrow transplant.17 Total parenteral nutrition therapy was started for any of the following reasons: treatment of mucositis of at least grade 3, insufficient oral intake (including refusal to eat owing to nausea, pain, or loss of appetite), and supplementation of oral intake to reach energy goals. The assessment of oral mucosa, according to common toxicity criteria, indicated grade 0 if no pain was present with a normal-appearing mucosa; grade 1 if painless ulcers, erythema, or mild soreness with no lesions was present; grade 2 if mucositis with painful erythema, edema, or ulcers were present, but the patient was able to swallow secretions; grade 3 for mucositis preventing swallowing of secretions; and grade 4 for mucositis requiring tracheal intubation.

The presence and severity of acute graft-versus-host disease were assessed daily by the transplant attending physician and nurses and was graded according to Glucksberg criteria.18 Infections were defined by the presence of positive cultures or abnormal results of specific molecular, histologic, or other diagnostic tests or if there were pathognomonic radiologic findings (eg, pneumonia). The presence of fever and neutropenia was sufficient to define febrile neutropenia. Neutrophil engraftment day was defined as the first of 3 sequential days in which the absolute neutrophil count was 500/mm3 or higher. Assessment of regimen-related toxicities (hepatic, pulmonary, and renal) was made daily during hospitalization by the transplant attending physician and nurses according to the National Cancer Institute common toxicity criteria.

Transplant course
The clinical course of hematopoietic stem cell transplant, the day of neutrophil and platelet engraftment, stem cell source, complications, and survival of patients are shown in Tables 1 and 2. Among the 41 children who underwent hematopoietic stem cell transplant, 27 (65.9%) children had 1 episode of febrile neutropenia, 5 had two episodes (12.2%), and 1 had three episodes (2.4%) during the 100 days after the procedure. Eight children (19.5%) did not experience fever during this period. Thirteen children (31.7%) received total parenteral nutrition for grade 3 or 4 mucositis or impaired oral nutrition. Duration of total parenteral nutrition was longer than 10 days in most of these 13 children (n=11).

Fifteen children had complications related to hematopoietic stem cell transplant within 100 days after the procedure. Of these 15 children, 6 had acute graft-versus-host disease, 2 had chronic graft-versus-host disease, 6 had grade-3 or grade-4 mucositis, and 1 had hemorrhagic cystitis. None of them had veno-occlusive disease. Additionally, 3 children had Cytomegalovirus reactivation, 1 had pleural effusion, 1 had idiopathic pneumonia, and 1 had failure of thrombocyte engraftment. Three children died during follow-up. One death was because of blastic transformation of chronic myeloid leukemia. The second child experienced leukemic relapse and died, and the third died of acute graft-versus-host disease.

The amount of garlic consumption also was insufficient in children who received total parenteral nutrition (P = .03).

Other foods and nutrients had no effect on the clinical course of hematopoietic stem cell transplant.

This study investigated whether the amounts of micronutrients, macronutrients, and foods including probiotics and/or prebiotics that children consumed before bone marrow transplant had any influence on transplant-related events and the clinical course of transplant. Interestingly, a negative correlation was detected between the day of neutrophil engraftment and the amount of soluble fiber and iron consumption. Additionally, the specific nutrients of breast milk, bazlama, and bulgur were found to be associated with faster time to neutrophil engraftment. A negative correlation between the number of febrile neutropenia episodes and the amount of yogurt and onion intake also was determined in this study. However, consumption of ready-made fruited cream cheese and haricot bean was associated with longer duration of febrile neutropenia. The duration of febrile neutropenia also was found to be significantly longer in patients who consumed an insufficient amount of vitamin C. Additionally, increased intake of parsley and onion was associated with reduced duration of total parenteral nutrition.

In the present study, it was determined that children who received total parenteral nutrition consumed less garlic than that of children who did not receive total parenteral nutrition. Lu12 reported that garlic consumption is effective against Cytomegalovirus infection, and that it is used in the author’s Chinese bone marrow transplant clinic, with encouraging results. To obtain a better prognosis in patients undergoing hematopoietic stem cell transplant, one should consider dietary intake of foods containing a sufficient amount of vitamin C, iron, and soluble fiber.

This study showed nutritional status (malnutrition or obesity) alone had no effect on neutrophil engraftment, complications of HSCT, and duration of febrile neutropenia. On the contrary, Yokoyama and associates8 showed significant correlation between the marrow recovery time and the initial nutritional state in patients who underwent hematopoietic stem cell transplant. Additionally, Papadopoulou and associates2 reported that poor nutritional status was associated with a greater frequency of febrile and vomiting episodes and a longer hospital stay. These contrary findings might be because of differences in the patients enrolled in the studies and the severity of malnutrition. Most of our patients were classified as healthy weight (53.6%), overweight (9.8%), or obese (12.2%) according to the World Health Organization growth standards.

There are some limitations of this study. One is that the patients were evaluated only by self-report checklists. Another limitation is that separated analyses of the groups in regard to the underlying disease of the patient, the conditioning regimen, the kind of stem cell sources, and HLA antigen compatibility of donors could not be performed because of a limited number of cases. More studies are required to better establish the efficacy and role of nutrition in children who undergo hematopoietic stem cell transplant. To our knowledge, this is the first study of the effect of nutritional habits in children undergoing hematopoietic stem cell transplant.

In conclusion, the nutrient contents and nutritional habits of the patients may affect the course of transplant. Therefore, our recommendation might be: "Let them eat yogurt, fermented bread, bulgur, onion, and parsley." 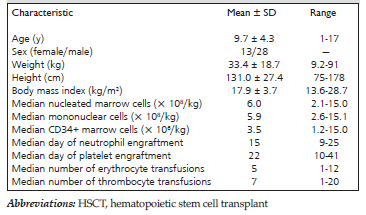 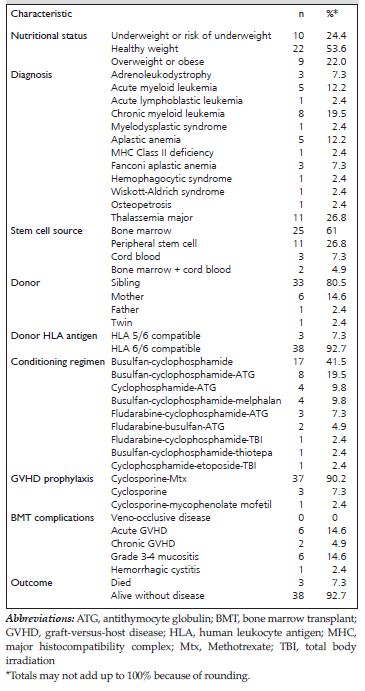 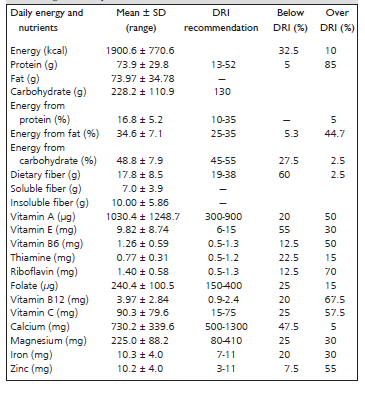 Table 3. Mean energy and nutrient intakes of children before HSCT according to dietary reference intake (DRI) (%). 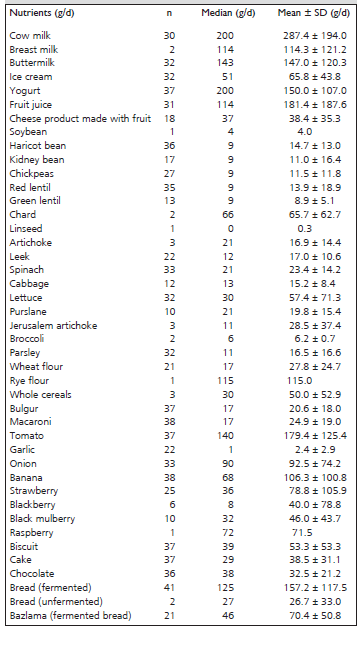 Table 4. Amount of probiotic and prebiotic foods taken by children before HCST. 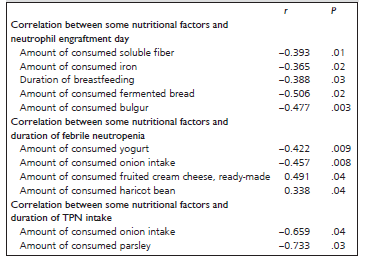 Table 5. Mean energy and nutrient intakes of children before HSCT according to dietary reference intake (DRI) (%).