Objectives: Transplanting is the sole therapy for the majority of organ insufficiencies, but the lack of organ donation limits transplanting. We evaluated the effect of education about “Organ Donation and Transplantation” over the false beliefs of the participants.

Materials and Methods: This interventional study was performed in a military unit between January and March 2010. Data on organ donation and demographic characteristics were collected by a questionnaire. The researcher gave the lesson, and then collected the data by the same questionnaire 2 months later.

Conclusions: Education could correct false information and might lead to higher organ donation rates. This education (which gave positive results in a military unit) could become widespread.

Transplanting solid organs has been considered a promising option only a few decades ago. Advances in understanding the immunologic pathways and improvements in surgical techniques have transformed the hopes for success into realities. Today, transplanting solid organs is a common therapeutic strategy for patients with end-stage organ failure with promising effects for survival and quality of life.

Organ donation is a person giving his or her permission while alive for the donation of their organs after death. However, because of a lack of donation, the number of patients on the waiting list is increasing.1 As deceased donation rates are low (especially in our country), most donations are done from the relatives of the patients. The rate of live donation in Turkey is 75%, whereas the rate of deceased donation in European countries is more than 80%.2 On the other hand, there are more than 15 000 patients waiting for a kidney and 1000 patients waiting for a liver in Turkey.2 And the demand is increasing with time.

Previous studies have shown that socioeconomic status, religion, sex, age, and education have played important roles in the volunteering for organ donation.3, 4 Among these factors, incorrect beliefs about transplant and donation were great obstacles. To increase donation rates, it is impossible to change the economic status, religion, sex, age, and graduated schools. However, it is possible to give correct information about myths about organ donation. The sources of information are media, health workers, and religious figures. These sources could be used for education of organ donation.

This interventional study was performed on a military base between January and March 2010. All of the soldiers in a unit were examined. The permission for the study was given by the director of the unit. All participants were male Muslims. Although they were similar in age and of the same sex, they were from different economic statuses and educational levels.

The data were collected by questionnaires. We benefited by the 2 studies of Bilgel and associates that had been performed in a Turkish population.3 In the questionnaire, participants were asked whether or not they had heard of organ donation and organ transplants; what was the source of that information; and whether or not they would be willing to donate their own and/or their relative’s organs. If they were not willing, they were asked for the reason. They were also asked what brain death was. They also were asked what one had to do for organ donation.

Also, illustrative materials such as brochures, photographs, and posters were used. During 2 months of education, brochures and posters about organ donation stayed on the walls of all the public areas.

Ages, education levels, and economic statuses of the participants were evaluated first. Economic statuses were classified according to ratios of incomes to the minimum wage (which is designated by the Ministry of Labour and Social Security). Also, knowledge about brain death, understanding the criteria for organ donation, volunteering for organ donation, consent for the organ donation of relatives, and information sources also were evaluated. Participants answered the questions just before the lesson and 2 months after the lesson to evaluate whether it remained in their minds after a time.

Statistical analyses were performed with SPSS software for Windows (SPSS: An IBM Company, Version 11.0, IBM Corporation, Armonk, NY, USA). Comparative analyses for changes during the time were evaluated by the McNemar test. The chi-square test was used to determine the relations of demographic findings and volunteering of organ donation. One-way ANOVA was used to compare education levels, source of information, and economic status, according to volunteering. P values < .05 were accepted as significant.

When given the same questionnaire 2 months after the lesson, there were 128 participants. All were told that they had been given information about organ donation, and that the source of that information had been a health worker (Table 3). The number of participants willing to donate their organs increased to 112 (87.5%). The difference was statistically significant (P < .0001). Among them, 94 were willing to donate their whole organs (83.9%), while only liver, kidney, and heart were willing to be donated by 4 (3.6%), 12 (10.7%) and 2 participants (1.8%). The rate of volunteering to donate whole organs increased significantly after the lesson (P < .0001). Only 16 participants (12.1%) did not change their minds. The reasons for refusal were religious beliefs (10) (62.5%) and no reason (6) (38.5%). The fears disappeared after the lesson, and religious beliefs for refusal decreased significantly (P < .0001). A total of 22 participants (17.1%) said that they would not consent to donating a relative’s organs, while 106 participants (82.8%) agreed to.

Although there have been substantial improvements in graft and patient survival rates, increased demand, with the limited number of organs, represents the most significant limitation of organ transplant.4, 6 The key to the organ supply dilemma is to promote awareness of organ donation and volunteering to donate. The best way to do this is through education in all levels.4 As was seen in this study, most participants lack information or have incorrect information and wrong beliefs about organ donation. We tried to show that the military is the one place where education about organ transplant had been given successfully.

Beside the discipline, the military is a place for education and training. “Organ Transplant” is one of the lessons given in the military education program. The components were prepared from the scientific and religious data (Turkish Supreme Board of Religious Affairs, Shariah Academy of the Organisation of Islamic Conference, The Grand Ulema Council of Saudi Arabia, and The Iranian Religious Authority).5, 10, 14 Incorrect beliefs and attitudes obtained from prior national studies were mentioned in the lesson.

There was no significant relation between education level and organ donation volunteering. Although the rate of organ donation volunteering was up to 75% in postgraduates, the difference was not significant. However, a strong relation has been mentioned in the literature.3, 9, 17 This is probably because of the low number of postgraduates used in our study. Although the education levels were low when compared with studies performed among university students, the rate of organ donation volunteering was higher in our study after the education. Although the economic status is an important factor for volunteering in some population-based studies,14, 17 there also have been studies pointing out no relation.3, 9 Most of the participants in our study were not economically independent. This could have been a factor for this difference from other studies. However, the results were similar to a previous study performed on graduate students who were dependent on their families.9

Media, health workers, religious figures, and friends are the some sources of information of the population.5, 17, 18, 19 Media is the main source of information in the literature with the ratio of 55% and 95%. This was similar to our results.18, 19 A recent study suggested that the success of media in last 10 years had been one of the most important factors for donation increase in Turkey.16 However, a study by Bilgel and associates showed that there had not been a significant increase in 12 years.3

Some misleading news might confuse the population also. The media was the primary source of information, but only 48.5% of the participants were aware of organ donation, and they were not completely informed. Although media is widespread, it should provide correct information to society without being confusing. Conversely, friends had less of an effect on the information both in our study and in the literature.17

Religious beliefs were a major reason for refusal to donate organs in our study. Religion was found to be 16.1% to 30% of the reasons in the study performed in Turkey, and in 33% in a study in Pakistan.3, 8, 14 However, it is known that religion is not against organ donation. Also, in a study performed in Turkey, 86% of the religious workers approved organ donation as an honorable act in Islam, and 77% of them had been in favor of the public becoming better informed.22 The Quran says: “And whoever saves a life it would be as if he saved the life of all the people.” In our study, after the education, 18 participants who thought that religion is against organ donation changed their minds. Also, in a study be Kýlýç and associates, 40% of the university students did not know whether religion is for or against organ donation.2 Although Islamic opinion strongly favors organ donation, surveys show that religious belief is the primary reason why persons refuse to donate. There was a thought that “Organs would be needed after death in our second lives.” This thought has been mentioned in the literature at a rate of 2.8% to 5.7%.3 A similar rate in our first questionnaire of 2.8% disappeared after the education like other wrong believes. The belief, “Recipient would have sins with his organs,” which is related with religious thoughts, disappeared after education. The fear of being “killed before death” was lower than in previous studies.6, 9 This thought disappeared after being given the education by learning what brain death was. The rates of consent to donate relatives’ organs were between 47.7% and 55% in the literature, which is similar to our first results.3, 9, 14 However, this rate increased to 80.3% after education. Lack of information, with the emotional attitudes, made the participant feel responsible for the wrong decision. This behavior also was effective in not talking about organ donations with relatives.

As in most studies, education is the key factor.23 After education, rates for organ donation significantly improved. Scientific and religious information about organ donation given by a doctor, with the illustrative techniques, is effective even in a population that has low economic and education levels. Wrong beliefs about religion are not unchangeable. If explained logically, the wrong beliefs can be corrected in most adults. The ideas of only 10 participants (7.8%) failed to change. Apart from religious beliefs, fears like being “killed before death” (that were related to a lack of information about brain death) disappeared after the lesson. Although some terms had been irrelevant at first for the participants, they remembered at least 1 of them 2 months later. While none of the participants knew what to do to donate organs before the lesson, they preferred to talk with relatives after the lesson. This consciousness is a way to spread information and awareness about organ donation.

As the study population was restricted to a special area, and they were of the same age and sex, this led to some limitations. Also, a limited time given for education was another limitation of this study. However, the study had successful results.

Educational programs could be performed in populations similar to military units, and “donation cards” could be signed by the participants after the education programs. In this way, the rate of organ donation could be increased. Conversely, new studies performed in larger populations are warranted. Specific factors affecting organ donation like religion, media, education, and economic status should be investigated separately to determine the net effect.

Table 1. Characteristics and organ donation volunteering of the participants.

Table 2. Organ donation volunteering of the participants who had information about organ donation. 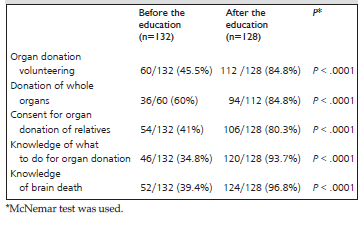 Table 3. Change of attitudes after the education.