Leprosy is a chronic granulomatous disease of the skin and peripheral nerves caused by Mycobacterium leprae. Among mycobacterial infections, leprosy is rare in renal transplant recipients. Here, we report the manifestations of lepromatous leprosy in a 41-year-old renal transplant recipient. Before the renal transplant, the patient had recurrent bullous lesions on his extremities with no systemic complaints. He was on an immunosuppressive regimen that included prednisolone (1 mg/kg/d), cyclosporine (6 mg/kg), and mycophenolate mofetil (2000 mg/d), and had 2 serologically confirmed acute episodes of cytomegalovirus infection that responded favorably to intravenous ganciclovir. The density of his bullous skin lesions decreased after renal transplant. During his regular posttransplant visits, we noticed a decrease in his eyebrow hairs on their lateral margins bilaterally. Later, he developed generalized, symmetric, erythematous papules. With a positive acid-fast bacilli with Fite staining, the results of a skin biopsy showed diffuse foamy histiocyte infiltration in the dermis. These findings are compatible with lepromatous leprosy. After antileprosy therapy, no deterioration of renal allograft function or lepra reactions was noted in a 4-month follow-up. Clinicians should consider leprosy in the differential diagnosis of skin lesions in immunocompromised hosts, and in particular, solid organ transplant recipients in endemic areas.

A 41-year-old man with end-stage renal disease owing to chronic pyelonephritis underwent a living-unrelated renal transplant in August 2006. The patient had been on an immunosuppressive regimen that included prednisolone (1 mg/kg/d), cyclosporine (6 mg/kg), and mycophenolate mofetil (2000 mg/d). His serum creatinine level 8 days after surgery was 106 µmol/L (1.2 mg/dL). Five months and 2 years after his transplant, the patient had 2 acute, serologically confirmed episodes of cytomegalovirus infection. Both episodes presented with fever and leucopenia, and were successfully treated with intravenous ganciclovir.5

The patient’s pretransplant medical history was remarkable for recurrent bullous lesions on his upper and lower extremities, particularly on the dorsum of his hands, with no systemic complaints. Within a few days, rupture of these bullae led to formation of slightly crusted lesions. A pretransplant biopsy taken from 1 of the lesions was indicative of intraepidermal bulla. Mucosal erosion and Nikolsky’s sign were negative. After the transplant, his renal allograft was functioning satisfactorily. The number of bullous skin lesions decreased after the renal transplant.

During his posttransplant visits, asymmetric erythematous macules and papules and bilateral loss of his eyebrow hair on the lateral margins and notable papules and scars were seen on his face (Figure 1). While his renal allograft was functioning normally, he developed multiple, symmetric, maculopapular rashes and erythematous papules on his chest, abdomen, and extremities in December 2009. The results of a physical examination revealed no organomegaly, lymphadenopathy, or mucosal involvement. No palpable peripheral nerves in his elbow, wrist, neck, or popliteal region were seen. Results of a neurologic examination revealed normal motor and sensory function (eg, fine touch and proprioception) in his upper and lower extremities. The results of smears of skin specimens from cutaneous lesions, and from skin folds on elbows and knees, were negative for leprosy. His upper respiratory tract and the results of ocular examinations were unremarkable.

Laboratory investigations showed his first-hour erythrocyte sedimentation rate to be 21 mm, his C-reactive protein to be 2+, his serum creatinine level to be 133 µmol/L (1.5 mg/dL), his blood urea to be 7.5 mmol/L (21 mg/dL), and his cyclosporine blood level to be 119 nmol/L (143 ng/mL). The results of a complete blood count, electrolytes, blood chemistry evaluation, and microscopic analysis of urine sediment were unremarkable. Antibodies to human immunodeficiency virus and hepatitis C as well as hepatitis B surface antigen were negative. Histopathologic examination of skin punch biopsies from his left and right arms showed granulomatous inflammation with densely infiltrated, foamy histiocytes in the dermis. Fite staining was positive for acid-fast bacilli in macrophage vacuoles and in the dermis (Figure 2). These findings are compatible with lepromatous leprosy.

The patient denied any history of household or intimate contact with a leprous person. The patient originally was from a rural area in the East-Azerbaijan Province in the northwest part of Iran (the second-most hyperendemic area of leprosy in Iran),6 but he had been living in an urban area for the last 20 years, so the source of M. leprae in this patient was puzzling. Thereafter, antileprosy therapy was started with dapsone (100 mg/d) plus clofazimine (50 mg/d) (unsupervised); and with rifampin (600 mg/mo) plus clofazimine (300 mg/mo) (supervised). We followed the patient for 4 months after starting him on antileprosy treatment. During this time, he showed no signs or symptoms of erythema nodosum leprosum.

This report describes the occurrence of lepromatous leprosy in a man who underwent a renal transplant 3 years earlier. His lepromatous leprosy was diagnosed based on clinical manifestations (eg, madarosis; leonine face; and symmetric, generalized skin lesions) and the presence of acid-fast bacilli in biopsy specimens from cutaneous lesions. As his pretransplant evaluation, bullous lesions were not seen with Fite staining and direct immuno-fluorescence microscopy, the mycobacterial or autoimmune nature of his pretransplant bullae could not be defined. No deterioration in renal allograft function was seen during the diagnosis of leprosy or after antileprosy therapy.

The host’s immunologic response to M. leprae determines the clinical manifestations and different types of leprosy including tuberculoid, lepromatous, and borderline leprosy. Minimal skin and nerve damage in polar tuberculoid has been attributed to the strenuous, cellular immune response to the mycobacterium.1, 13 Conversely, owing to the absence of specific cellular immunity, proliferation of
M. leprae is uncontrolled in polar lepromatous; hence, there is extensive infiltration of the skin and nerves.1 The spectrum from polar tuberculoid, to borderline tuberculoid, to midborderline, to borderline lepromatous, to lepromatous leprosy is related to evolution from asymmetric localized macules and plaques, to nodular, indurated, symmetric, generalized skin lesions, and an increasing bacteriologic index.14 In any patient from an endemic area where there are skin lesions or peripheral neuropathy, leprosy should be considered in the differential diagnosis. However, the diagnosis of leprosy should be confirmed by cytologic (smear) examination or histopathology.15

Most people appear to be naturally immune to leprosy and do not develop the disease after exposure. Numerous factors have been attributed to the individuals’ susceptibility to leprosy, among which, genetic factors play a role.1, 2 As immunity against M. leprae relies on intact T-cell function—after solid organ transplant and subsequent immunosuppression, changes in T-cell responsiveness and cytokine function—the clinical spectrum of leprosy may substantially alter.1, 2 Leprosy also has been described with other immunosuppressive conditions such as human immunodeficiency virus (HIV) infection. In contrast to tuberculosis, neither HIV prevalence increases among leprous patients nor does the clinical spectrum of leprosy alter in HIV patients.16 Such a lack of association might be attributed to the long incubation period of leprosy.17 Nonetheless, there are limited data to discuss the effect of leprosy on the graft or the possible effect of immunosuppression on leprosy development.

Similar to the case of leprosy in a heart transplant recipient reported by Gasink and associates,2 our patient endured 2 bouts of cytomegalovirus infection after transplant. The combination of immunologic effects of leprosy and posttransplant immuno­suppression may have put him at increased risk of cytomegalovirus infection.2 The patient was treated with ganciclovir for cytomegalovirus infection and responded favorably. In addition, we followed the standard multidrug therapy for lepromatous leprosy recommended by World Health Organization: self-administered dapsone with clofazimine and supervised rifampicin plus clofazimine.1, 14 No guideline is available for managing leprosy in immunocompromised individuals at present. Nevertheless, earlier reports indicate a similar response of these patients to the standard multidrug therapy without need of modification.4, 10, 11 In solid organ transplant recipients, antileprosy therapy also requires particular attention to potential drug interactions (rifampin-induced low cyclosporine blood level) that may end in graft rejection.18 In the present report, however, neither deterioration of renal allograft function nor graft rejection was noted after antileprosy therapy. 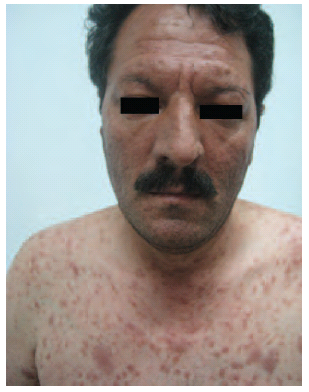 Figure 1. Bilateral loss of eyebrow hair and erythematous papules on the face and chest. 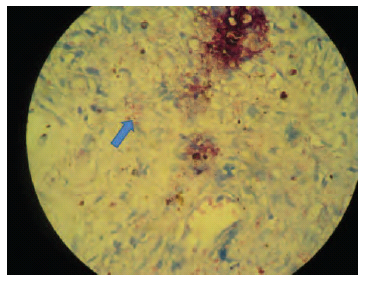