Materials and Methods: Sixty patients who had undergone a kidney transplant were studied in this double-blind, randomized, placebo-controlled clinical trial. Those subjects were randomized to receive either 5 mg/d of oral folic acid or an equivalent dosage of placebo. The main outcome variables were the plasma total homocysteine level and carotid intima-media thickness (determined via B-mode sonography) at baseline and 2, 4, and 6 months after kidney transplant. We used independent and paired sample t tests for data analysis.

Homocysteine is an intermediate product of methionine metabolism. An elevated level of Hcy has a negative effect on endothelial cells, coagulation factors, and platelet function (10-12) and could lead to adverse structural changes in carotid artery properties (13) that can be detected in several ways. One of the most frequently used and reliable markers for such changes is the carotid intima-media thickness as determined by B-mode Doppler sonography (14). Carotid intima-media thickness, which is useful in predicting cardiovascular outcome in several patient populations (14-16), appears to be a feasible, reliable, valid, and cost-effective method for use in population studies and clinical trials of atherosclerosis progression and regression (10).

Prior studies have shown that a successful reduction in the plasma total homocysteine (tHcy) level can lead to a decrease in carotid intima-media thickness and the incidence of cardiovascular events (3, 4, 17, 18). Some studies have shown that after kidney transplant, the level of tHcy will increase gradually but never reaches a level within normal limits (1). It thus seems that the treatment of hyperhomocysteinemia after kidney transplant is beneficial (19). Supplementation with B vitamins and folic acid is the treatment of choice for hyperhomocysteinemia (20, 21) and could lead to a reduction in cardiovascular risk and carotid intima-media thickness in the general population (11, 12, 21). However, there is not enough evidence to support the effectiveness of folic acid in treating hyper­homocysteinemia or decreasing the carotid intima-media thickness after kidney transplant. We designed a double-blind, randomized, placebo-controlled clinical trial to investigate that issue in kidney transplant recipients.

Participants
The duration of the study was from June 2005 to March 2006. A summary of the inclusion and exclusion criteria (Table 1) and a diagram showing enrollment and randomization (Figure 1) are included in this report. Patients who met the study criteria and were willing to participate were accepted as subjects. The subjects were patients with end-stage renal disease who had undergone a kidney transplant from a living unrelated donor. The mean age of the patients was 40.9 ± 10 years (age range, 25 to 62 years). There were 32 (58.2%) male subjects and 23 (41.8%) female subjects. Demographic data and baseline variables are presented in Table 2. All informed subjects provided their written consent to participate before the study, which was approved by the medical ethics research committee of the Shahid Behesti University of Medicine, was initiated.

Study protocol
This was a double-blind, randomized, placebo-controlled clinical trial. At enrollment, patients were randomly assigned to receive either folic acid 5 mg/d or placebo tablets. The duration of the study was 6 months. Patients and study personnel were unaware of the study group assignments, laboratory measurements, and carotid imaging findings. Before the study was initiated, the subjects were treated with a standard immunosuppression regimen consisting of triple therapy (prednisone, myco­phenolate mofetil, and cyclosporine microemulsion formulation. We performed laboratory examinations and radio­graphic measurement at baseline and 2, 4, and 6 months after kidney transplant.

Laboratory assessments
We used a radioimmunoassay to measure the subjects’ plasma total homocysteine level. The samples for that test were obtained after the subjects had been fasted of food for 12 hours. We also measured the levels of serum folic acid, vitamin B12, lipids (triglyceride, cholesterol, high-density lipoprotein, low-density lipoprotein), serum cyclosporine, blood urea nitrogen, and creatinine.

Statistical analyses
We used the mean and standard deviation and the relative frequencies, based on the variable types, to describe our studied variables. To compare the measurements of carotid intima-media thickness and the values of tHcy in the 2 study groups, we used the independent sample t test. To compare each cited variable in each group with the respective baseline value, we used the paired sample t test. The differences between the 2 groups with respect to the relative prevalence of the nominal variables were studied by means of the chi-square test. A P value of < .05 was considered statistically significant.

Except for the total cholesterol level, all other measured variables did not differ between the treated and control groups. Supplementation with folic acid caused a significant increase in the plasma folic acid level in the treated group (from 5.4 ± 3.1 mmol/L at baseline to 7.9 ± 4.4 mmol/L, 8.9 ± 4.4, mmol/L and 10.2 ± 4.5 mmol/L at 2, 4, and 6 months, respectively; P value for each interval compared with baseline, < .05). There was no significant change in the plasma level of folic acid in the control group.

At the end of the study (ie, 6 months after the study initiation), the tHcy values and carotid intima-media thickness in the folic acid group were significantly lower than baseline (10.9 ± 2.1, 0.71 ± 0.1 µmol/L; P < .001 and P = .011, respectively). In the control group, the tHcy level reached 20 ± 6.9 µmol/L, which was not significantly higher than baseline (P = .342). The carotid intima-media thickness in the control group reached 0.85 ± 0.2 mm, which was significantly higher than baseline (P = .003). When we compared the 2 groups, we found that tHcy values and carotid intima-media thickness were both significantly lower in the folic acid group than in the control group (P <.001 and P = .003; respectively). During the study, the lipid profile (ie, the levels of total cholesterol, high-density lipoprotein, low-density lipoprotein, and triglycerides) was not significantly different nor from the baseline measure in each group, neither between the folic acid and control group (Figure 4).

Because of the high prevalence of cardiovascular events that occur during early posttransplant months (32), we agree that aggressive intervention is needed during the first year after a kidney transplant to prevent the development of a cardiovascular event (33). We believe that the beneficial effects of a kidney transplant on atherosclerotic indices do not occur for several months after surgery and that during that interval, patients have a relatively greater risk of experiencing a cardiovascular event. Because of the adverse sequelae of having undergone a kidney transplant (eg, recurrent hospitalizations or infections and the effects of immunosuppressive therapy), it seems wise not to impose a greater risk of cardiovascular accidents on such patients, especially when those events could be prevented by using a simple treatment like administration of folic acid. Other interventions (eg, steroid-free immuno­suppressive therapy [34] or a reduction in the cyclosporine dose [35]), which are useful in reducing the plasma tHcy level and the risk of cardiovascular disease, should also be considered when possible.

Our study has some limitations. The relatively small sample size is a major limitation in generalizing the results. Also, the brief follow-up limited our ability to determine the long-term effects of our intervention on the patient population studied. The power of our study lies in our use of valid measures and methods to evaluate atherosclerotic status and to determine the subjects’ plasma level of tHcy. 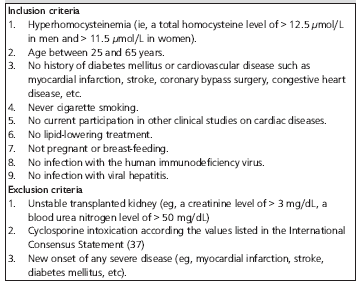 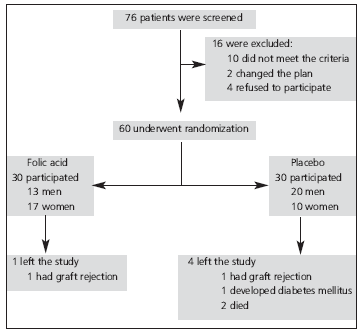 Figure 1. Enrollment and randomization of the study subjects 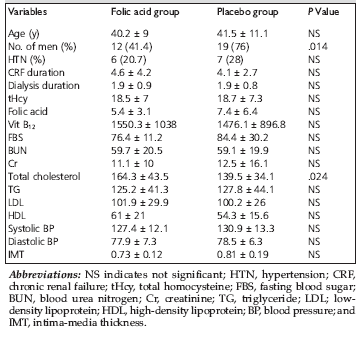 Table 2. Demographic and baseline variables of the study groups 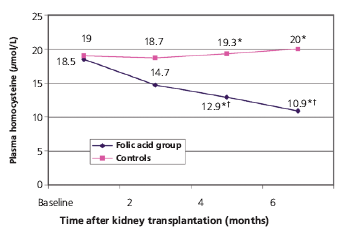 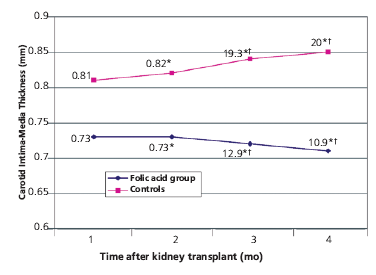 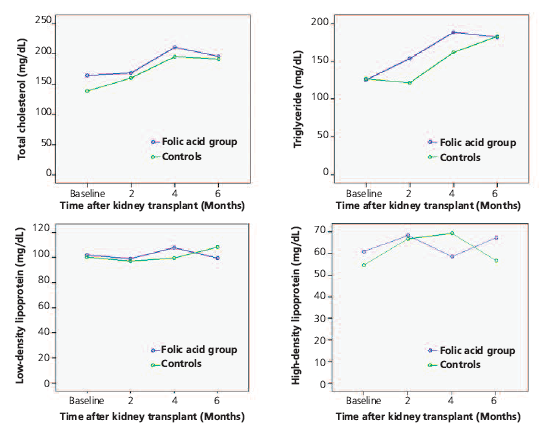 Figure 4. Changes in the lipid profile of the study subjects