In June 2004, a 49-year-old man underwent orthotopic liver transplantation (OLT) without venovenous bypass for decompensated liver disease caused by hepatitis C and alcohol abuse. The manifestations of his liver disease included hepatic encephalopathy, refractory ascites, extreme fatigue, lower-extremity edema, and hepatocellular carcinoma. The ascitic fluid was clear and the color of straw. The serum ascites gradient was greater than 1.1 g/dL. After surgery, this patient was discharged with instructions to continue treatment with mycophenolate mofetil, prednisone, tacrolimus, trimethoprim/sulfamethoxazole, and ganciclovir. At discharge, his aspartate amino transferase (AST) and amino alanine transferase (ALT) values were 39 U/L and 78 U/L, respectively.

In March 2005, 9 months after the transplantation, bilateral nonpitting lower-extremity edema and diuretic-refractory ascites developed and were treated with large-volume paracentesis every 2 weeks (± 0.66 week). During each paracentesis treatment, a mean (± SD) volume of 9 L (± 2.5 L) was removed. The ascitic fluid was milky, and the patient’s triglyceride value was 173 mg/dL (± 46.2 mg/dL). The ascitic fluid albumin value was < 1 g/dL, and the mean serum albumin value was 2 g/dL (± 0.22 g/dL). The mean serum creatinine value was 1.7 mg/dL (± 0.2 mg/dL), and the serum triglyceride value ranged from 248 to 255 mg/dL. The results of bacterial and fungal cultures and cytologic studies were consistently negative. Magnetic resonance imaging (MRI), including MRI angiography and venography of the abdomen and pelvis, revealed marked ascites and patent blood vessels. The results of the hepatic venogram and pressure measurements showed no peritoneal abnormality, portal hypertension, or hepatic vein thrombosis. The results of a transjugular liver biopsy indicated mild lymphocytic infiltration and periportal fibrosis.

Because of the patient’s persistent chylous ascites, a lymphangiogram was performed to determine whether the thoracic duct was intact. The diagnosis of lymphedema tarda (Meige disease) was based on the results of the bipedal lymphangiogram, which demonstrated insufficient lymphatic drainage from the left lower extremity and lymph nodes within the femoral triangle as well as mild fibrosis over the dorsal fascial planes (Figures 1, A and B; and 2, A and B) [3]. Fluoroscopically guided cannulation of a single lymphatic vessel over the dorsum of the right foot revealed impedance to the flow of ethiodized oil (Ethiodol) contrast medium. Fluoroscopically guided cannulation of the lymphatic vessel over the left foot showed the flow of Ethiodol into a single dilated lymphatic vessel (as opposed to the usual 6 to 10 such vessels) over the medial left thigh and into a single superficial inguinal lymph node (Figure 1, A and B). Ethiodol contrast medium was noted in the superficial inguinal, hypogastric, and iliac divisions. Eventually, the contrast medium advanced into the left lumbar lymphatic vessels and crossed over to the right of midline, partially outlining the periaortic lymphatic vessels up to the level of the second to the third lumbar vertebra of the cisterna chyli. The contrast medium was contained within the thoracic duct at the middle of the twelfth thoracic vertebra. A fluoroscopically guided study showed the extravasation of Ethiodol from the thoracic duct at the level of the twelfth thoracic vertebra. A metal wire was placed over the site to mark the level of extravasation of the contrast medium (Figure 3, A and B). Initial and delayed 24-hour follow-up radiographs documented the swelling of both feet as well as the circumvention of residual Ethiodol contrast medium into the superficial and dermal lymphatic vessels of the left foot and leg (Figure 2, A and B). The images featured in this report best display the causes of the patient’s lymphedema tarda and the extravasation of Ethiodol as previously described.

In July 2005, treatment with pegylated interferon and ribavirin was discontinued. The following month, therapy with a low-fat medium-chain triglyceride and orlistat was begun. Although the frequency of paracentesis was not altered, the ascitic fluid triglyceride level decreased from a mean of 173 mg/dL to 75 mg/dL. The patient underwent the placement of a peritoneovenous shunt in October 2005. From October to February 2006, he required 3 paracentesis treatments. The mean (± SD) ascitic fluid triglyceride value on the day of each paracentesis treatment was 75 mg/dL (± 10.6 mg/dL), and the mean (± SD) serum albumin value was 3.7 g/dL (± 0.33 g/dL). Furthermore, the appearance of the ascitic fluid changed from milky to clear and straw-colored. Since February 2006, this patient has not required further paracentesis, and his lymphedema has resolved. Abdominal ultrasonography in March 2006 revealed no ascites, and his hepatitis C viral load was undetectable.

Chylous ascites is a rare finding that was shown in a study by Press and colleagues to occur with an incidence of approximately 1 in 20,000 admissions to a large university-based hospital over a 20-year period [4]. However, it is widely believed that the incidence of chylous ascites has increased because of more aggressive cardiothoracic and abdominal surgery as well as the longer survival of patients with cancer [5]. Chylous ascites can be caused by any of 3 mechanisms: obstruction of the major lymphatic channels at the base of the mesentery or the cisterna chyli, which causes leakage of chyle from dilated mesenteric lymphatic vessels; direct leakage of chyle through a lymphoperitoneal fistula created by abnormal or injured retroperitoneal lymphatic vessels; or the exudation of chyle through the retroperitoneal megalymphatic vessels without a visible fistula or obstruction of the thoracic duct [6].

Chylous ascites is caused by an abdominal malignacy or cirrhosis in more than two-thirds of all patients [1]. As many as half of those malignancies are lymphomas [1, 5]. Injury during abdominal aortic surgery, which is the most common cause of postoperative chylous ascites, results in 81% of all chylous complications [7]. Nevertheless, chylous ascites accounts for fewer than 1% of all complications after vascular surgery involving the abdominal aorta [8]. Warren shunts are an uncommon cause of chylous ascites [9], and chylous ascites rarely develops after liver transplantation [2, 10, 11]. We presumed that the development of chylous ascites after OLT in our patient (who did not exhibit ascites before his liver transplant) was caused by the disruption of lymphatic vessels near the porta hepatis or the retrohepatic area during the dissection and removal of the native liver.

Primary lymphedema, which results from aplasia or hypoplasia of the lymphatics, is thought to be a genetically determined disease, the expression of which varies by the patient’s age at onset [12]. There are several primary causes for lymphedema: Milroy disease, a rare disorder in which the patient demonstrates a lymphatic malformation at birth; lymphedema praecox, which has an onset at or near puberty; and lymphedema tarda (Meige disease). Lymphedema tarda is the rarest developmental abnormality of the lymphatic system and is not clinically evident until the patient is 35 years of age or older. The manifestation of lymphedema tarda usually follows a precipitating event such as trauma or an inflammatory reaction [12].

Chylous ascites frequently causes painless abdominal distension [13]. Abdominal paracentesis is the most important diagnostic tool in evaluating and managing patients with ascites. In contrast to the straw-colored and transparent appearance of ascites caused by cirrhosis and portal hypertension, chylous ascites usually has a cloudy and turbid appearance. The triglyceride value in ascitic fluid (which is typically higher than 200 mg/dL, although some clinicians use a cutoff value of 110 mg/dL [14, 15]) is very important in identifying chylous ascites. Radiographic studies useful in the diagnosis and management of chylous ascites include computed tomography (which reveals pathologic intra-abdominal lymph nodes and masses) and lymphangiography and lymphoscintigraphy (which show abnormal retroperitoneal nodes, leakage from dilated lymphatic vessels, fistulization, and the patency of the thoracic duct) [16, 17]. Lymphangiography, which is the gold standard for identifying obstructions, may result in complications such as reactions to the contrast medium, transient lymphedema, tissue necrosis, or fat embolism [5, 16].

The management of chylous ascites remains controversial, but current treatments include repeated therapeutic paracentesis; a high-protein, low-fat, medium-chain–triglyceride diet; total parenteral nutrition (TPN); diuretics; the placement of a transjugular intrahepatic portosystemic shunt; peritoneovenous shunting; percutaneous coiling of the thoracic duct; or surgical ligation of the disrupted lymphatic channel [1, 18, 19]. The use of TPN in combination with octreotide has been reported to result in the rapid resolution of chylous ascites after liver transplantation [7]. It has been speculated that somatostatin improves chylous ascites by inhibiting lymph fluid excretion through specific receptors found in the normal intestinal wall of lymphatic vessels [7]. In a retrospective review of 156 patients with chylous ascites from various causes, 51 patients were successfully treated surgically (41% with the ligation of a leak, 39% with a peritoneovenous shunt, 10% with resection, and 10% with another surgical technique such as a peritoneal fluid filtration circuit) [5]. Of the 105 remaining patients who were treated conservatively, 67% were treated successfully. Forty-three percent of those individuals achieved success by dietary modification alone; a combination of diet, TPN, and paracentesis was successful in 26%; TPN alone produced resolution in 14%; and paracentesis alone was successful in 7% [5].

Our patient was initially treated with orlistat (which was recently reported to have benefitted a patient with chylous ascites [20]) and a high-protein, low-fat, medium-chain–triglyceride diet. When those measures were unsuccessful, he underwent the placement of a peritoneovenous shunt. Eventually, he experienced the resolution of both his chylous ascites and the edema caused by abnormal lymphatic drainage. Our case report should increase the awareness that congenital anomalies of the lymphatic system, when exacerbated by surgical procedures such as OLT, are often indicated by edema of the lower extremities. 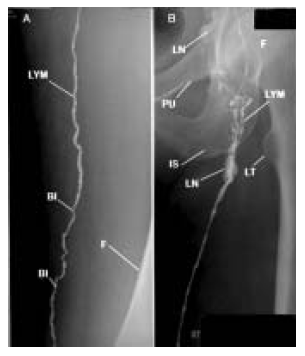 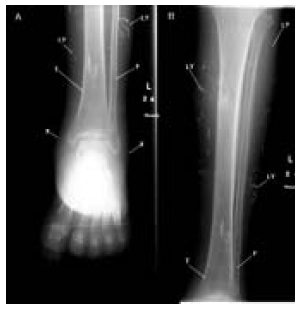 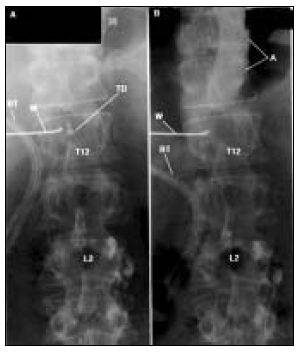 Figure 3, A and B. These figures are fluoroscopic images acquired as Ethiodol contrast medium extravasates from the region of the thoracic lymph duct over the twelfth thoracic vertebra. A) The patient was quietly breathing during this study. Bile duct tubing with a wire shows the dilation of the vessel and the extravasation of Ethiodol from the thoracic duct at the second lumbar vertebra. B) A fluoroscopic image captured during the Valsalva maneuver, which increased the patient’s abdominal pressure and caused the Ethiodol in Figure B to exit via the thoracic lymph duct.