Results: Nephrectomy was left sided in 96.2%. Mean follow-up was 13.32 ± 35.98 months. Mean warm ischemia time was 8.17 minutes (range, 2.5-19 minutes). Mean operative time was 260.34 minutes. Median serum creatinine levels (mg/dL) of the recipients were 1.30, 1.45, and 1.20 at day 7, and at 1 and 12 months. One-year graft survival was 92.7%, 94.6%, and 92.6% in the laparoscopic donor nephrectomy groups with warm ischemia times of less than 6, 6-10, and more than 10 minutes (P = NS). Conversion to open surgery occurred in 2.1% of donors, and reoperation was performed in 3.8% of laparoscopic donor nephrectomies. Blood transfusion was required in 7.1% of donors. Ureteral complications were observed in 2.1% of recipients. Vascular control was performed using medium-large clips instead of endo GIA, and the kidney was extracted via a suprapubic approach using the hand instead of an ENDOCATCH bag; hence, $600 was saved in each nephrectomy. No vascular accident occurred from pedicular vessels.

Conclusions: Laparoscopic donor nephrectomy can be performed with a less-expensive setup (to be expanded in developing countries) without jeopardizing results. Because warm ischemic time in our study did not affect graft outcome significantly, there appears to be no need to rush harvesting the kidney to achieve a better quality kidney. Vascular control using nonautomatic clips instead of more costly endo GIA and hand extraction of the kidney is safe, practical, and economical.

Renal transplantation is the preferred method of therapy for most patients with end-stage renal disease (ESRD) because it is more cost effective [1] and allows a return to a more normal lifestyle than does maintenance dialysis [2].

There is a worldwide shortage of organs, and the gap between supply and demand is growing. The most striking feature of renal replacement therapy programs in developing countries is the emphasis, and in some cases exclusive reliance, on living-related donor transplantation [3].

Since donor care and donor surgery are of utmost importance, when the first laparoscopic donor nephrectomy (LDN) was reported by Kavoussi and Ratner, we decided to consider using this minimally invasive technique in our donors, leading to the first laparoscopic donor nephrectomy in Iran in 2000. Since then, we have performed 430 LDNs. We recently reported the first randomized clinical trial in the world comparing 100 LDNs with a similar number of cases of open donor nephrectomies (ODNs) [8]. This study confirmed decreased postoperative pain, decreased recovery time, better cosmetic results, while the long-term graft survival in 406 days’ follow-up in the laparoscopic and open groups was similar (93% and 92.7%, respectively).

The flank incision used for the vast majority of ODN operations is associated with significant morbidity, including intraoperative pneumothorax, postoperative pain, wound diastasis, hernia, and chronic incisional pain [9,10] that may be associated with restricted activity, long-standing pain, and limitation of work and recreational activities [11].

In the past several years, use of LDN as a minimally invasive surgery represents a unique solution to decrease donor apprehension and therefore increase the number of kidney donations.

The standard technique for LDN has been reported before [12-13]. We have made significant modifications to the conventional LDN to make laparoscopy safer and more cost effective and to be accepted by our health provider systems. Our major modifications have been as follows:

1. Modified open access
Because our laparoscopic procedures are done in a teaching setting (we have an approved 2-year fellowship program in endourology and urolaparoscopy training for 5 fellows each year), we elected open access as the only access type to prevent entry complications. We have experienced no complications using this approach. Instead of using the standard Hasson’s technique, we make a 1-cm incision above the umbilicus, and after incising the fascia, the peritoneum is entered by a blunt scissors while holding the abdominal wall upward. We then introduce a nondisposable ordinary trocar into the abdominal cavity. To prevent gas leak, we make the skin incision the same diameter as the trocar sheath, and we can then tighten the skin around the trocar using a silk suture.

2. Pedicule control via medium-large metallic clips instead of a vascular stapler
Because the Endo GIA vascular linear cutting stapler (US Surgical Corp, Norwalk, Conn, USA) is expensive (about $150 each) and also seemingly unsafe [14-15], we decided to use 3 medium-large metallic clips (nonautomatic firing) to occlude the artery and vein. We have encountered no complications using this technique in 430 cases.

In our opinion, using the Endo GIA stapler is not only expensive but also unsafe, because there are reports of linear stapler failures [14-15]. Fifty-five malfunctions in 50 patients have been documented in the US Food and Drug Administration database [14]. Of the 50 patients, 15 required open conversion, and 2 died postoperatively.

3. Hand extraction
We elected to extract the donated kidney from a transverse lower abdominal (suprapubic) incision, which cosmetically produces the best result (because of hair growth in the incision site). We avoid using an ENDOCATCH™ bag (US Surgical) saving about $150.

4. Avoid rush in harvesting the kidney
In our first prospective study [8], we demonstrated that longer warm ischemia times (WIT) (less than 17 minutes) were not associated with an adverse outcome in kidney transplantation. (This presentation was awarded the best laparoscopic paper in 2004 at the 22nd World Endourological Congress.) Mean creatinine level was 1.3 mg/dL in 3 different WIT groups during a follow-up of 406 days.

Consequently, it is unreasonable to rush to decrease WIT at the expense of jeopardizing both kidney quality and kidney donors during LDN. This makes teaching LDN less stressful for both the tutor and the student.

5. LDN and kidney transplantation should be doneby the same lead surgeon and team
During LDN at our institution, senior fellows in training prepare the kidney and team leader (senior urologist) removes the kidney; transplantation in the recipient is performed by the same senior urologist after the recipient is prepared by transplantation fellow in training. Vascular anastomosis is usually done in about 20 minutes using only one 60 Prolene suture continuously with only one knot at the end of the suture. Stay sutures are avoided. To prevent the purse-string effect, we loosen the vascular clamp before tying the knot at the end.

Several series have retrospectively evaluated the laparoscopic approach versus the similar open approach, and it has become clear that the operation is technically feasible and safe for the donor [12,17,18]. In the first clinical trial [16,8], we performed the above comparison in a randomized controlled trial of 200 donors (100 LDN, 100 ODN).

Conversion to open nephrectomy is required in 0%-13.3% of donors undergoing LDN, with vascular injury being the most common reason for conversion [19]. In our study, out of 100 patients, only 1 required conversion in the LDN group and 2 patients required reoperation in the ODN group. Major complications have been reported in 0%-4%[11] of patients during LDN including small bowelinjury, myocardial infarction, pulmonary emboli, bowel obstruction, and hernia. We did not have any of these major complications in our study. The only reason for conversion or reoperation was hemorrhage (1 in LDN, 2 in ODN).

Mean WIT for ODN and LDN was 1.8 and 8.7 minutes (range, 4-17 minutes), respectively. This reconfirms that WIT in LDN at the time range presented (14-17 minutes) does not change graft outcome.

Early urologic complications, particularly urinary leak, were reported to be higher for LDN versus ODN in the initial series [20]. Further improvement in the operative technique has reduced the overall ureteral complication rate to 0%-0.7% [8,16,20]; we were able to do this because of wider dissection around the ureter, which maintains adequate periureteral fat and thereby preserves ureteral vascular supply.

The laparoscopic donor operation has a financial impact in 3 areas [13]: cost of hospitalization, lost wages for donors, and increasing live kidney donation and the associated savings achieved with transplantation when compared with long-term dialysis.

LDN has the potential to be more expensive than ODN primarily because of the use of disposable instruments (ports, Endo-GIA, ENDOCATCH bag) and longer operative times. However, when the overall costs to donor, patient, family, employer, and society are considered, the more rapid recovery and return to work offered through laparoscopic donation yields an actual cost savings of $4000 per patient [22]. The use of nondisposable instruments and further reduction in hospitalization may have a positive impact on financial burden.

The model we present here with special modifications makes laparoscopy even more comparable to its open counterpart through a significant decrease in cost. Although this is important for developed countries, it is even more important for countries with limited economic resources.

Another economic savings we elected is the very low transplant surgeon fee, about $150 for each kidney transplantation surgery. To further elucidate the issue, we have to consider the fact that the fee for a coronary bypass in Iran is about $4000, and the transplantation fee in the world is not less than $3000. This, along with the use of all available donor sources including living-related donors, cadaveric donors, and unrelated donors (Iranian model) [21], has enabled Iran to perform more than 17,000 kidney transplantations in the last 2 decades, making it the only country in the world that has almost no persons on a waiting list for kidney transplantations [21]. Interestingly, the majority of our recipients are from the same socioeconomic group as their donors owing to the adoption of this model.

In light of our 20-year experience with more than 2000 kidney transplantations [6] and more than 400 laparoscopic donor nephrectomies in 4 years, the following suggestions can be made: 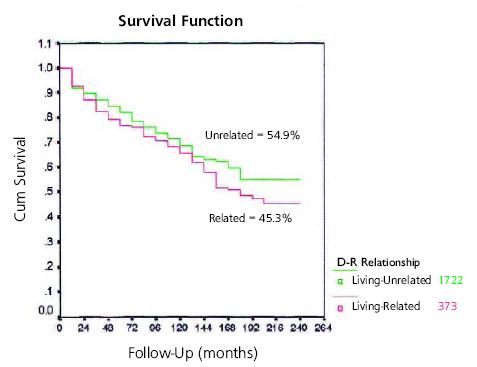