Patients: We report on a 20-year-old man with advanced Budd-Chiari syndrome caused by paroxysmal nocturnal hemoglobinuria, who under­went an emergency liver transplant.

Results: At the time of this writing, the patient has good primary hepatic function, and, although not receiving specific medication, shows no signs of pancytopenia. Anticoagulation with low-dose acetylsalicylic acid was initiated. Forty-eight months after the transplant, there are no signs of thromboembolic complications affecting the liver.

Paroxysmal nocturnal hemoglobinuria is an acquired chronic hematologic disorder that may be treated curatively by a bone marrow transplant (1, 2). Thromboembolic complications that have a predilection for the hepatic veins (Budd-Chiari syndrome) are responsible for high morbidity and mortality rates (3).

Owing to the fact that a variety of different causes may underlie Budd-Chiari syndrome, there is no standard therapeutic approach to the condition. Depending on the extent of occlusion of the hepatic veins, Budd-Chiari syndrome may be treated by several nonoperative and operative options. In cases of advanced disease, liver transplant is being used with increasing frequency. Liver transplant for Budd-Chiari syndrome caused by paroxysmal nocturnal hemoglobinuria is rare, with only 7 case reports being noted in a review of the literature (Table 1).

Patients
Case presentation
A 19-year-old man with esophageal variceal bleeding was admitted to another hospital and, after failed endoscopic attempts to control the bleeding, a Sengstaken probe was used to tamponade the bleeding. After emergency admission to our hospital, the bleeding was finally controlled after massive transfusion of 17 units of red blood cells, 13 units of fresh frozen plasma, and 3 platelet concentrates followed by repeated endoscopic interventions and multiple ligations.

The patient had a 7-year history of aplastic anemia. During initial paracentesis, 10 liters of ascites was recovered. A diagnosis of paroxysmal nocturnal hemoglobinuria had been established 6 months earlier by detecting expression of glyco­sylphosphatidylinositol-anchored proteins on the blood cells. Also at this time, under alternating treatment with cyclosporine, cortisone, and antithymocyte globulin to treat pancytopenia, the patient developed a deeper jaundice and recurrent epistaxis.

Four months before the current admission to our hospital, a diagnosis of Budd-Chiari syndrome had been established on the basis of angiographic computed tomography and magnetic resonance imaging studies (Figure 1). At that time, histologic investigations revealed extensive hepatic necroses with no signs of necrotic transformation of the liver. Because of the considerable compression of the inferior vena cava by extensive hepatomegaly, a metal stent was implanted.

Owing to unstable circulation, the patient was listed as “high urgency” on the waiting list of the European Liver Transplant Registry. Three days after admission, an orthotopic liver transplant, with removal of the hepatic segment of the vena cava, including a metal stent, was done. No veno-venous bypass was constructed. Owing to the patient's tendency to develop diffuse bleeding, and endoscopically uncontrollable bleeding from a former varix in the fundus of the stomach, several relaparotomies became necessary.

After the operation, the liver transplant showed normal function. Transient oliguric renal in­sufficiency was successfully treated with hemo­filtration. The explanted material, weighing 5100 grams, was appreciably enlarged with the right lobe measuring 17 × 18 × 7.5 cm, the left lobe 11 × 16 × 5 cm, and the caudate lobe 7 × 12 × 5 cm. Both the right and left hepatic veins were occluded by a thrombus.

Immunosuppressive treatment with cyclosporine and steroids was initiated. In view of the patient's tendency to develop diffuse bleeding, postoperative anticoagulation initially was not applied. One month after the transplant, during the course of paroxysmal nocturnal hemoglobinuria, marked throm­bocytopenia (< 6000/µL) requiring repeated substitution treatments with platelet concentrates occurred. Administration of high-dose steroids and immunoglobulins initially failed to bring about improvement, but after a further course, there was a spontaneous increase in the platelet count.

Eight weeks after liver transplant, the patient was discharged and put on low-dose anticoagulation with 50 mg/d acetylsalicylic acid. At the time of this writing, immunosuppression is being continued with FK 506 and prednisolone at a dosage of 2.5 mg/d. At 91 months after transplant, the patient was in good clinical condition with no signs of recurrence of the primary disease. Noteworthy is that no further specific medication was necessary.

Paroxysmal nocturnal hemoglobinuria is an acquired, pluripotent, hematopoietic stem cell disorder caused by somatic mutation of the X-linked PIG-A gene, leading to partial or total deficiency of all proteins linked to the cell membrane by a glyco­sylphosphatidylinositol anchor (4, 5). Paroxysmal nocturnal hemoglobinuria is usually accompanied by other forms of bone marrow aplasia (6). Characteristic features of the disease are chronic intravascular hemolysis, pancytopenia, and recurrent thromboembolic events, with the latter having a decisive influence on morbidity and mortality.

The clinical course of paroxysmal nocturnal hemoglobinuria is usually chronic, with a median survival of about 10 years (3). The sole therapeutic option for paroxysmal nocturnal hemoglobinuria is bone marrow transplant (7). Some patients appear to benefit from immunosuppressive treatment with corticosteroids, cyclosporine, or ATG (3, 8, 9). Various other treatments such as G-CSF and androgens have a positive effect on neutropenia, anemia, and thrombocytopenia (10, 11).

A particularly disastrous development is the occlusion of the hepatic veins by a thrombus, which is reported to occur in 12% of the patients with a Budd-Chiari syndrome (12, 13). Why the hepatic veins have a predilection for thromboses is unclear.

Treatment of Budd-Chiari syndrome comprises both medical and surgical modalities. Because of its heterogeneity, there are no standardized therapeutic regimens for its treatment. Nonsurgical approaches include administration of diuretics, anticoagulation treatment, and thrombolytic therapy to relieve hepatic venous outflow obstruction (13, 14). Treatment with percutaneous angioplasty and transjugular intrahepatic portosystemic shunt placement reportedly produces poor results, but more recently, transjugular intrahepatic porto­systemic shunt has been used in patients with deteriorating liver function as a "bridge" to liver transplant (15, 16).

When there is severe disordering of liver function with therapy-resistant ascites and histologic evidence of centrilobular necroses or fibrosis, surgical intervention is indicated. The standard form of treatment for acute Budd-Chiari syndrome with a patent vena cava is the construction of a side-to-side portocaval shunt. However, owing to hypertrophy of the caudate lobe, this often proves difficult.

An alternative approach is the mesentericocaval shunt (17). The increased tendency to develop thrombosis, together with the less than optimal relief of the intrahepatic sinusoidal pressure compared with the portocaval shunt, however, limit its use to cases in which a portocaval shunt is technically difficult. All portosystemic shunt operations aim at relieving sinusoidal pressure by portal decompression, and giving the liver an opportunity to regenerate. By creating a portosystemic shunt in good time, continued progression of the disease to cirrhosis can be terminated, and a long-term survival rate of better than 90% can be achieved (18). In all advanced cases that show histologic evidence of cirrhosis, a fulminant course with threatening hepatic failure, and failure of shunting, transplant is the treatment of choice (19).

Patients with Budd-Chiari syndrome account for only 1% to 2% of all orthotopic liver transplants performed for Budd-Chiari syndrome (17, 19). In terms of survival rate and other postorthotopic liver transplant complications, no differences are seen in comparison with the overall group of liver transplanted patients (17). In contrast to hepatic-based inborn errors of metabolism (eg, protein C deficiency), which can be completely cured by total hepatectomy and liver replacement without any need for life-long prophylactic anticoagulation, it is almost impossible to achieve curative treatment of hematologic disorders outside the liver with surgery alone (20, 21).

Liver transplant for Budd-Chiari syndrome due to paroxysmal nocturnal hemoglobinuria is rare. The literature contains only 8 case reports describing 11 orthotopic liver transplants in these patients (19, 20, 22-27). Inasmuch as the postorthotopic liver transplant course is described in the literature, recurrence of the underlying disease soon leads to failure of the liver graft in most patients (Table 1). The reason for this is to be seen in the postoperative anticoagulation management. While pancytopenia is associated with a latent bleeding proclivity, as a result of enhancement of platelet activation, platelet surface expression of P-selectin, fibrinogen, and lysosomal protein are increased and lead to thromboembolic complications (28). For this reason, most authors recommended initiating anti­coagulation in the early postoperative period (23, 24, 27). In our own patient, anticoagulation initially was not applied because of our patient’s proclivity to develop diffuse bleeding. We initiated low-dose anticoagulation with acetylsalicylic acid 50 mg/d only when the patient's clinical condition had clearly improved, with an increase in the platelet count to more than 30 000/µL. 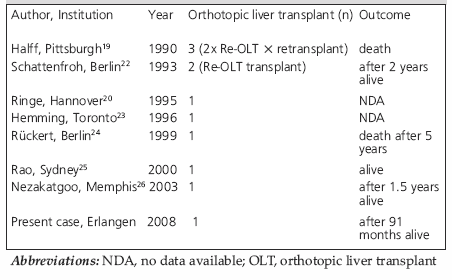 Table 1. Liver transplant for Budd-Chiari syndrome due to paroxysmal nocturnal hemoglobinuria; review of the literature. 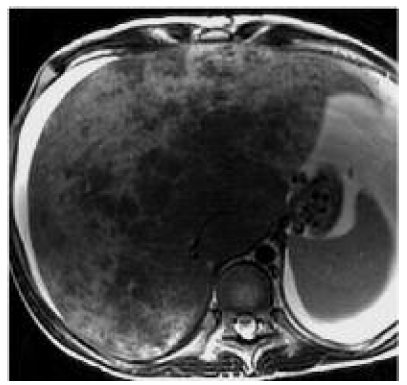 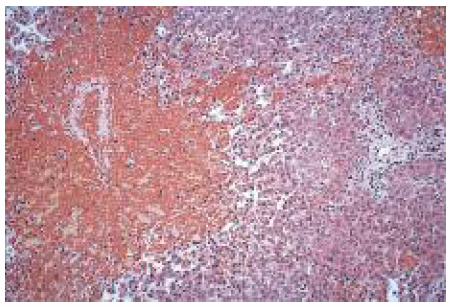