Refractory antiphospholipid syndrome represents a challenge for preventing thrombosis that may occur despite adequate anticoagulation and immuno­modulation therapy. Here, we report a 35-year-old male patient who presented with variable venous thromboembolic events. Autologous hematopoietic stem cell transplant was performed after conditioning with cyclophosphamide and antithymocyte globulin. Five years after transplant, the treatment continued to show a successful outcome in preventing new thrombotic events. Autologous hematopoietic stem cell transplant represents a chance for cure from antiphospholipid syndrome despite the paucity of reported data so far.

Antiphospholipid syndrome (APS) is an autoimmune multisystemic disorder characterized by arterial, venous, and small vessel thromboembolic events and/or pregnancy morbidity in the presence of antiphospholipids (aPL).1 The pathogenesis of APS-associated clinical manifestations appears to result from a variety of aPL effects on coagulation pathways, through impaired fibrinolysis2 or the procoagulant actions of these antibodies on platelets,3 annexin,4 Toll-like receptors, especially Toll-like receptor 4, which interact with aPL to potentiate its thrombogenic effects,5 protein C, and tissue factors.6 For patients who develop thromboembolic manifestations of APS, standard therapeutic interventions include anticoagulants and antiplatelets. Immunomodulation with glucocorti­costeroids and other immunosuppressive therapies such as azathioprine, cyclophosphamide, and methotrexate could reduce the levels of aPL, especially if anticoagulants and antiplatelets have failed to prevent further thrombosis.7 Investigational therapies for APS have included autologous hematopoietic stem cell transplant (HSCT)8 and rituximab. Here, we report our experience with a refractory APS patient who did not respond to all lines of standard therapeutic interventions and eventually showed a successful outcome after autologous HSCT.

A 35-year-old male patient was referred to our outpatient department in March 2012 as a case of primary APS for possible HSCT. He had been diagnosed at age of 16 years and since then had 16 events of recurrent thrombosis presenting as portal vein thrombosis, superior mesenteric vein thrombosis, inferior mesenteric vein thrombosis, non-ST elevation myocardial infarction, right iliac vein thrombosis, and recurrent pulmonary emboli with chronic thromboembolic pulmonary hypertension. These occurred despite receiving adequate anticoagulation with an antiplatelet. He did not respond to repeated immunomodulation therapies (mycophenolate mofetil, rituximab, and glucocorticosteroids). Reevaluation in our center confirmed the presence of lupus anticoagulant, with anticardiolipin (ACL) immunoglobulin G (IgG) level of 49.3 U/mL (normal 0-15 U/mL), and β2GP1 IgG level of 16.7 U/mL (normal 0-10 U/mL). Both antinuclear antibodies and anti-double-stranded DNA antibodies were negative.

The patient received autologous HSCT in November 2012. Mobilization of hematopoietic progenitor cells was done using cyclophosphamide at a dose of 3 g (1.5 g/m2) and granulocyte colony-stimulating factor at a dose of 10 μg/kg/day for 6 days. The collected CD34-positive cells were processed in vitro to deplete the T cells using the CliniMACS system (Miltenyi Biotec, Cologne, Germany), in which magnetic antibodies could selectively bind and eliminate the T cells. The purified CD34-positive cells were subsequently cryopreserved in liquid nitrogen. Pretransplant conditioning regimen included cyclophosphamide at 50 mg/kg/day for 4 days with antithymocyte globulin at 30 mg/kg/day for 3 days (Figure 1). A total dose of 6.03 × 109 per kg CD34-positive cells was infused. Engraftment was defined as absolute neutrophil count of > 0.5 × 109/L and platelet count of > 20 × 109/L on days 10 and 12 post-HSCT, respectively. However, the patient required glucocorticosteroids and dapsone to maintain the platelet count recovery.

At day 2 posttransplant, the patient had bilateral pulmonary hemorrhage with acute right external iliac vein thrombosis. He was intubated and shifted to an intensive care unit and given intravenous immunoglobulin and pulse steroids, which resulted in marked improvement followed by successful extubation. Five months after transplant, the patient had a second pulmonary hemorrhage. The patient was referred to Duke University Hospital (Durham, NC, USA) for chronic thromboembolic pulmonary hypertension management where pulmonary endarterectomy was performed.

One year later, the patient's recovery was complicated by Libman-Sacks endocarditis, which was treated with intravenous heparin, pulse steroids, intravenous immunoglobulin, cyclophosphamide, and rituximab. Treatment resulted in complete resolution of endocarditis apart from mild residual mitral regurgitation. At almost 5 years after transplant, the patient has not developed any new thrombotic event (Figure 2). He is currently negative for lupus anticoagulant. The patient remains on oral rivaroxaban 20 mg twice daily and oral hydrox­ychloroquine 200 mg twice daily.

There is limited experience in treating refractory cases of APS with autologous HSCT. As reported here, our patient had a 16-year history of APS that was refractory to anticoagulation and different modalities of immunosuppressive therapies. CD34-positive selected autologous HSCT resulted in a dramatic decrease in ACL IgG and β2GP1 IgG levels (Figure 2) and successfully prevented any further thrombosis during 5 years of follow-up.

The beneficial effects of HSCT for treatment of refractory autoimmune diseases are in the treatment's ability to ablate autoreactive lymphocyte clones by purification of the collected CD34-positive cells along with use of antithymocyte globulin to deplete T cells in the blood and peripheral lymphoid tissue through complement-dependant lysis and apoptosis.9 However, lymphodepletion may not be the only mechanism. Muraro and associates10 examined the long-term immune reconstitution of patients with multiple sclerosis who received HSCT. After recovery of leukocyte levels, at 2-year follow-up, there was on average a doubling of the frequency of naïve CD4-positive T cells at the expense of memory T cells. Phenotypic and T-cell receptor excision circle analyses confirmed a recent thymic origin of an expanded subset of naive T cells. Analysis of the T-cell receptor repertoire showed the reconstitution of an overall broader clonal diversity and an extensive renewal of clonal specificities compared with before therapy.

Sun and associates11 reported data regarding increased thymic T-cell output 12 months after HSCT. One of the largest cohort studies that evaluated the long-term outcomes after HSCT was reported by Farge and associates.12 In 900 patients with different autoimmune diseases who were included in the European blood and marrow transplant registry between 1996 and 2007, 5-year survival rate was 85% after transplant and progression-free survival rate was 43%.

Regarding treatment of APS with autologous HSCT, there are few reports. However, Statkute and associates8 reported on 28 such patients with secondary APS and systemic lupus erythematosus. After autologous HSCT, 75% of patients had disappearance of lupus anticoagulant, 70% had normalized ACL IgG levels, and 80% of the patients discontinued anticoagulation therapy over a median of 4 months after transplant, with 78% of patients remaining free of thrombotic events at follow-up of 78 months (median of 15 months). Hashimoto and associates13 presented a 27-year-old female patient with systemic lupus erythematosus and 10-year history of refractory APS. The patient had myocardial necrosis despite immunosuppressive therapy and frequent plasmapheresis. Serum ACL IgG decreased from 84.2 to 25.5 U/mL (normal < 10 U/mL) and β2-GP1 IgG antibodies from 17.5 to 2.8 U/mL (normal < 3.5 U/mL) at 6-month follow-up after autologous HSCT. Owaidah and associates14 published a report about a 34-year-old male patient who had a 9-year history of primary APS complicated by recurrent deep venous thrombosis/pulmonary emboli. He had Budd-Chiari syndrome, bilateral adrenal infarctions, and iliac vein thrombosis despite proper anticoagulation and immune modulation. Autologous HSCT with conditioning was performed, which resulted in marked improvements of aPL with no new episodes of thrombosis after 2-year follow-up.

Autologous HSCT represents an option for patients with refractory APS, especially for those who have recurrent events of thrombosis despite the use of adequate anticoagulation and multiple lines of immune modulatory therapy. 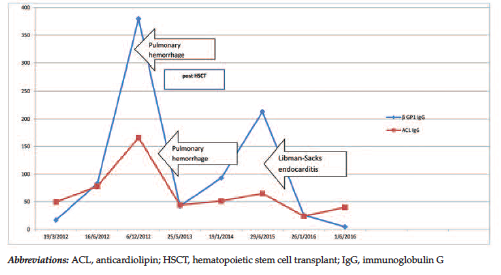