Materials and Methods: In 48 transplant recipients, including 29 recipients who had follow-up liver biopsy ≥ 6 months after transplant, histology and clinical courses were reviewed. Outcomes were evaluated for patients grouped into slow and rapid fibrosis groups. Treatment with pegylated interferon and ribavirin was assessed in 18 patients.

Conclusions: In recipients of living-donor liver transplant with early recurrence of hepatitis C have worse fibrosis progression but graft survival was not affected. Therapy with pegylated interferon and ribavirin achieved sustained virologic response only in a small proportion of the patients.

The primary aim of this study was to describe the clinical, virologic, and histologic outcome in liver transplant recipients infected with hepatitis C virus and who received a transplant from a living donor. The secondary aim was to assess the response to a low-accelerated dosage regimen of PEG-IFN and ribavirin in patients with histologic evidence of recurrent hepatitis C virus infection.

Evaluation
Data were abstracted from the clinical records including information about immunosuppression, indications for liver biopsy, episodes of rejection, virologic studies, hepatitis C virus genotypes and RNA measurements, treatment for recurrent hepatitis C virus infection, and the laboratory model for end-stage liver disease (MELD) score calculated at the time of transplant.8 Biliary complications were noted from laboratory, ultrasonography, and magnetic resonance imaging, and confirmed by reports from percutaneous intervention, endoscopy, and surgery.

All causes of graft loss were included, and death was regarded as a graft loss. Long-term graft survival was evaluated at ≥ 6 months after transplant to avoid inclusion of early graft loss from complications associated with the transplant procedure. Patient survival was defined as the time from the initial transplant until death or last known follow-up. Patients lost to follow-up were censored on the date when they were last known to be alive for analysis of patient and graft survival. Death from hepatitis C virus was defined as death resulting from graft failure secondary to either severe recurrent hepatitis C or the cholestatic variant of recurrent hepatitis C virus. Death not related to hepatitis C virus included death from other causes such as infection, perioperative complications, recurrent hepatocellular carcinoma, or biliary complications. A separate analysis was performed, including all recipients who received the low-escalating dosage regimen protocol, to evaluate treatment outcome with PEG-IFN.

Liver allograft histology
Archived biopsy specimens were obtained for of those reviewed. All histology assessments were performed by the same liver pathologist (MIF) who was blinded to patient identity. Indications for liver biopsy included abnormal elevation of liver enzymes. Slides stained with hematoxylin-eosin were blindly reviewed without background clinical information and graded for necrosis, inflammation, rejection, and cholestasis. Slides stained with Masson trichrome were reviewed to assess fibrosis staging. Necrosis and inflammation were graded with the hepatitis activity index.9 Scores included assessment of the presence and degree of periportal or interface hepatitis, confluent necrosis, focal necrosis, and inflammation and portal inflammation. Acute cellular rejection was graded with the Banff rejection consensus criteria.10 The presence or absence of mixed portal inflammation, bile duct damage, and endotheliitis were assessed and a grade was assigned.

Statistical analyses
Statistical analyses were performed with SPSS software (SPSS: An IBM Company, version 17.0, IBM Corporation, Armonk, NY, USA). Descriptive statistics were calculated, including frequency and percentage for categorical variables and median or mean and standard deviation for continuous variables. Categorical variables were compared with the chi-square or the Fisher exact test. Continuous variables were compared with Mann-Whitney U test. Survival curves were calculated with Kaplan-Meier method and comparisons were made with log-rank test, with linear trends for factor levels pooled over strata. Statistical significance was defined by P ≤ .05.

Of the 29 recipients, a single patient had spontaneous clearance of his HCV infection and in the rest 28 recipients the median time of histologic recurrence of HCV infection was 6 months (mean ± SD, 8.5 ± 8.7 months). Recipients with early histologic recurrence (defined as ≤ 6 months since their transplant) had a significantly higher fibrosis progression rate as compared to those with later recurrence (2.21 ± 1.41 vs 1.04 ± 0.28, P = .009). We have shown this relation more clearly in the Figure 1 that shows the aggregation of higher rate of FPR toward the left of the X-axes, suggesting earlier the recurrence worse the FPR. However, despite these differences in their FPR, long-term graft survival between those with early versus later recurrence was not affected over a median follow up of 76 months by Kaplan-Meier survival analysis (log rank, P = .99).

Therapy with pegylated interferon and ribavirin
In 18 transplant recipients with recurrent hepatitis C virus infection who were treated with a low-escalating dose regimen of PEG-IFN and ribavirin, all recipients received immunosuppression with tacrolimus with or without other immunosuppressive drugs (Table 5). The mean interval from the living-donor liver transplant to the histologic diagnosis of recurrence was 24 weeks and the mean interval from transplant to treatment initiation was 83 weeks (Table 5). Few recipients who had PEG-IFN and ribavirin developed sustained virologic response (Table 5).

There is limited information available about the long-term outcome and treatment of recurrent chronic hepatitis C virus in recipients of living-donor liver transplant. A primary finding of the current study was the excellent 1-year graft survival frequency with living-donor liver transplant in patients with cirrhosis associated with hepatitis C virus, albeit with some overall reduction in long-term graft survival. The reduction in graft survival was independent of the fibrosis progression rate, biliary complications, and hepatocellular carcinoma status before transplant.

The effect of hepatitis C virus recurrence on the graft and the underlying evolution of the histologic parameters, especially the severity and progression of liver fibrosis, have been studied previously.6,12-14 Additional studies have addressed demographic, clinical, perioperative, biochemical, and viral factors associated with the accelerated histologic and clinical course of recurrent hepatitis C virus infection after liver transplant.15,16 Factors that may affect the severity of hepatitis C virus recurrence include donor age,6,12 degree and specific type of immunosuppression,17-19 development and treatment of acute cellular rejection,15,20 development of CMV infection,21 and type of liver transplant (deceased-donor or living-donor transplant).22-24 However, much information about these risk factors for severe recurrence was determined from studies with deceased-donor liver transplant and may not be applicable to living-donor liver transplant recipients. In the present study, we could show a clear relation between earlier histologic recurrence of hepatitis C and worsening fibrosis progression in recipients with living-donor liver transplants; however, long-term graft survival was not affected by this trend. The long-term survival also was not affected by the presence or absence of bile duct problems.

Another finding of the present study was that a low-accelerating dosage regimen of combination therapy yielded a sustained virologic response rate similar to that reported in deceased-donor liver transplant patients. A previous study with an early intervention strategy reported sustained virologic response rate 34.7%, but eligibility for that study was low (56%).25 In the present study, eligibility for PEG-IFN and ribavirin also was low (50%). Combination therapy in liver transplant patients may be associated with frequent and severe adverse events, including the frequent need for erythropoietin and/or filgrastim.26-29 All patients in the present study required supportive treatment with erythropoietin and/or filgrastim. The frequency of treatment discontinuation because of adverse events was 39% in the present study, higher than 16% reported in immunocompetent subjects with significant severity.30 The role of combination therapy with PEG-IFN and protease inhibitors is not established; despite preliminary reports of benefit, wider application has been limited by toxicity, and safer regimens that are not based on interferon are being evaluated.31,32

The limitations of the current study are those limitations inherent to any retrospective, single-center study. Donor selection criteria and recipient selection criteria are center-specific and introduce bias that may limit applicability of these results to other centers. On the other hand, single-center analyses do provide some clarity to certain variables by permitting observations with consistent donor and recipient selection, operative experience, and postoperative management, or by identifying and testing variables not available in registries. Additionally, small samples, particularly in subgroup analyses, have limited statistical power but permit meaningful observations that can be used to develop future areas of investigation. Knowledge gained from results of such retrospective studies on treatment of hepatitis C in living-donor liver transplant recipients with hepatitis C can be used for future randomized, multicenter trials. Additionally, our knowledge on fibrosis progression in recipients with recurrent hepatitis C is still evolving as opposed to the more commonly performed deceased-donor liver transplants especially in the Western world. More such series of center-specific studies, and subsequent meta-analyses, may afford the best alternative to building the knowledge that will ultimately help us define the natural history of hepatitis C more definitively in recipients with living-donor liver transplant recipients. 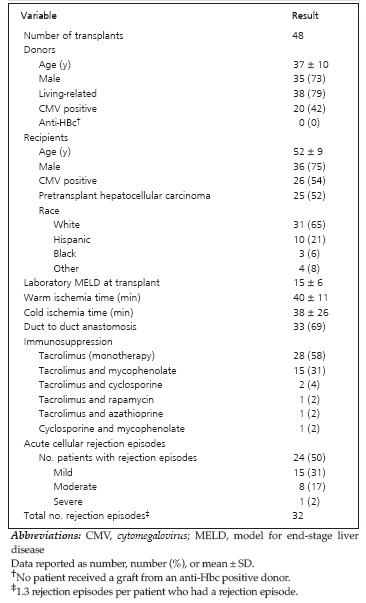 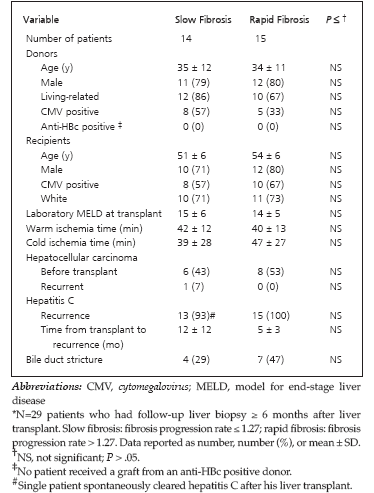 Table 2. Relation Between Fibrosis Formation and Characteristics of Patients Before and After Liver Transplant* 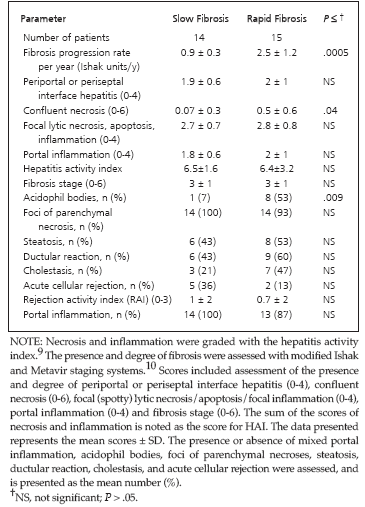 Table 3. Relation Between Fibrosis Formation and Histologic Characteristics Assessed at the Stage of Maximum Fibrosis 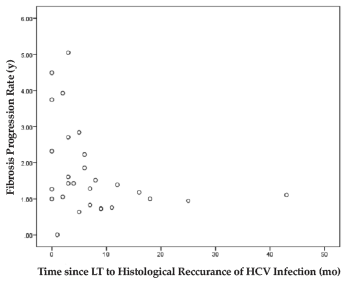 Figure 1. Relation Between Fibrosis Progression Rate and Time Since Liver Transplant of Histologic Recurrence of Hepatitis C Infection in the Allograft. 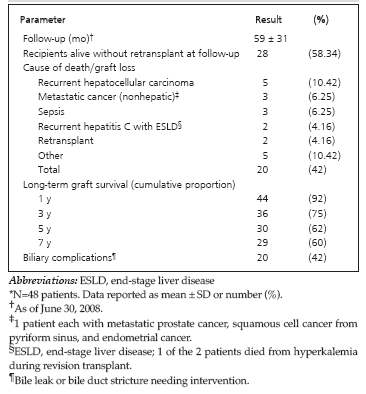 Table 4. Follow-Up in Recipients of Liver Transplant Who Had Hepatitis C Virus Infection*

Figure 2. Relation Between Cumulative Survival of Liver Transplant Graft and Biliary Strictures (2A) and Biliary Complications (2B) 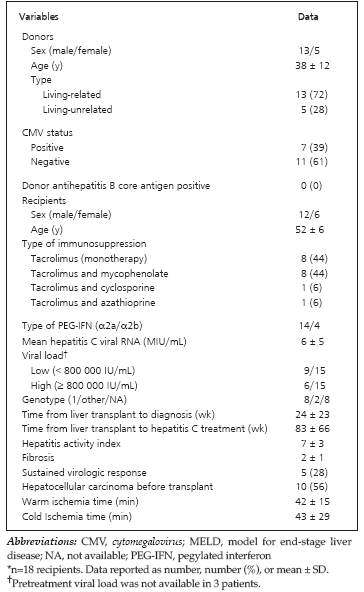 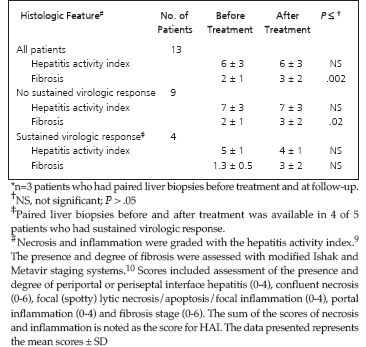