Materials and Methods: Twenty-five patients who had received renal transplants with anti-hepatitis C virus-positive and normal liver function were enrolled. Ten patients had allograft dysfunction because of cyclosporine nephrotoxicity. Sirolimus was initiated at 2 mg/d and adjusted to 6 to 8 ng/mL. Cyclosporine was gradually tapered and then stopped; 15 patients were used as a control group. Sirolimus-related hepatitis was defined as a rise in liver transferases or alkaline phosphatase or bilirubin over twice the upper limit of normal. Viral replication was defined as elevated liver enzymes and increasing viral load and/or biopsy-proven hepatitis C virus active hepatitis.

Results: After conversion, there was a reduction of hemoglobin and hematocrit. In 1 patient, the immunosuppressive regimen was changed back to cyclosporine owing to anemia and hepatotoxicity leading to prompt return of hematocrit and liver enzymes to their original values. One of 10 antihepatitis C virus-positive patients (10.0%) developed sirolimus-associated hepatotoxicity, compared with 2 patients in the control group (13%). Sirolimus patients showed a significant decrease in the HCV PCR levels from 700 000 to 400 000 IU/mL; P < .001, compared to 680 000 to 660 000 IU/mL in cyclosporine patients; P = NS, with comparable levels of transaminases

Conclusions: Our data suggest that sirolimus has the potential to suppress viral replication in hepatitis C virus-positive renal transplant candidates.

The presence of hepatitis C virus (HCV) in renal transplant recipients is an independent risk factor for graft failure and death. It is known that patients with HCV who switch from azathioprine to mycophenolate mofetil experienced an increase in viral load. Despite this, mycophenolate mofetil is used because it prevents rejection more reliably than azathioprine. Sirolimus is an another immunosuppressive agent that reliably prevents rejection and may have antiviral activity.1-3

Recently, it has been shown that one may limit hepatitis C virus progression in liver transplant recipients using a sirolimus-base for immuno­suppression. The mammalian target of rapamycin is an influential molecule for the anti-HCV action of interferon.4 On the other hand, chronic allograft nephropathy from using calcineurin inhibitors can lead to graft loss, whereas sirolimus maintains better graft function with lower rates of chronic allograft nephropathy.5,6

We report our experiences with sirolimus conversion among HCV-positive patients with chronic allograft nephropathy regarding hepatic and hematologic effects that could affect its use. This study was designed to see if the viral load of HCV is reduced by switching from cyclosporine to sirolimus.

The primary outcome measure was hepatitis C viral load 6 months after conversion. Sirolimus-related hepatitis was defined as a rise in liver transferases or alkaline phosphatase or bilirubin over twice the upper limit of normal. Viral replication was defined as elevated liver enzymes and increasing viral load and/or biopsy-proven HCV active hepatitis. Inclusion criteria included renal transplant recipients with anti-HCV-positivity, and a history of thromboembolic disease. All protocols were approved by the ethics committee of the institution before the study began, and the protocols conformed with the ethical guidelines of the 1975 Helsinki Declaration. Written, informed consent was obtained from all patients.

Ten long-term anti-HCV positive renal transplant patients with chronic allograft dysfunction caused by taking calcineurin inhibitors, whose maintenance immunosuppression was based on cyclosporine, were given sirolimus therapy in place of cyclosporine.5 Hepatitis C virus viremia levels were measured on 2 separate occasions before introducing sirolimus, and 6 months after. Sirolimus therapy was associated with a significant drop in HCV viremia, although there were no significant changes in liver enzymes. Our data suggest that sirolimus can be used in HCV renal transplant patients, especially in those with high viral load whose maintenance immunosuppressive therapy is based on cyclosporine.

Hepatitis C viral-mediated liver injury after renal allograft has been reported to follow a progressive course compared with nonimmunosuppressed patients.7,8 Persistently high viral burden after renal transplant may contribute to viral C-associated renal damage.9 The choice of calcineurin inhibitor does not effect recurrence rates of HCV hepatitis. Unfortunately, steroids are associated with a marked increase in HCV replication and cannot be used to reduce calcineurin inhibitor doses. Mycophenolate mofetil (MMF) increases HCV viral load. A recent increase in the severity of recurrent hepatitis in patients with HCV receiving liver transplants has been attributed to MMF and interleukin-2 receptor blockers.10 Increased fibrosis of the liver occurs during antiviral anti-HCV treatment in patients taking MMF, but patients on azathioprine develop cirrhosis quicker, possibly because of rejection.11

A large industry-sponsored phase III clinical trial has been underway for several years in which patients have substituted sirolimus for calcineurin inhibitors after liver allograft.14 The objective of that study is to determine effect of conversion on renal function. No detrimental effect (thrombosis, rejection, or recurrent viral infection) was apparent to the safety board after 2 reviews.14

In conclusion, sirolimus has been shown to be a potent immunosuppressive agent after renal allograft; however, special concern regarding anemia should be evaluated thoroughly in those patients. Our data suggest that sirolimus has the potential to suppress viral replication in HCV-positive renal transplant candidates. The switch seems safe, with no increase in viral copies. Graft renal function remains stable with increased proteinuria that must be followed.

From the Departments of 1Nephrology and 2Clinical Pathology, Cairo University, Cairo, Egypt
Acknowledgements: None of the authors has any conflicts of interest, and they received no funding for this study.
Corresponding author: Amin R. Soliman, Cairo University, Faculty of Medicine, 41 Manial Street, Cairo, Egypt, 11451
Phone: +20 22 291 2555
Fax: +20 22 291 2555
E-mail: aroshdy@hotmail.com 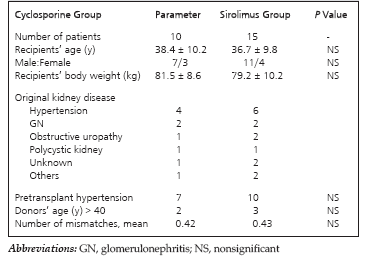 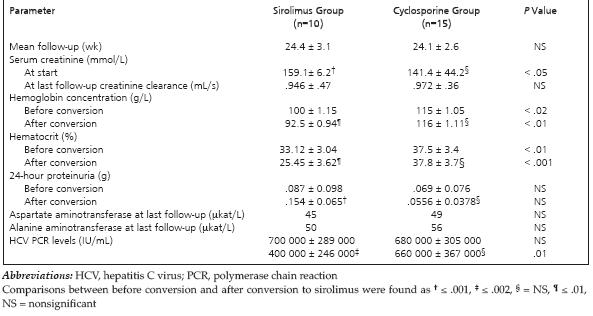