Results: Of 7 patients, 5 had positive results for gastroesophageal reflux disease (71%). Omeprazole had a disease-stabilizing effect on the patients’ pulmonary function tests.

Conclusions: Our study shows a significant association between bronchiolitis obliterans syndrome and gastroesophageal reflux disease in postallogeneic hematopoietic stem cell transplant patients. Use of omeprazole may have a disease-stabilizing effect in short-term follow-up.

Bronchiolitis obliterans syndrome (BOS) is a significant and serious late complication in hematopoietic stem cell transplant (HSCT) recipients. It affects 6% to 10% of post-HSCT patients, with overall survival at 5 years of only 13%.1-3 It is the main cause of chronic rejection in lung transplant patients, affecting upwards of 60% to 70% of post-lung transplant long-term survivals.4

The cause of BOS is poorly understood and is believed to be heterogeneous with multiple factors influencing its pathogenesis and progression. The most commonly accepted view is an immunologic effect that involves a lymphocyte-mediated inflammatory and fibrotic process that affects the epithelium and subepithelium of the airways leading to narrowing and airflow limitation. Recent data are emerging to reflect an association of BOS with gastroesophageal reflux disease (GERD), mainly in post-lung transplant patient, because many of these patients have GERD caused by vagal nerve injury during a lung transplant. Fundoplication surgery for GERD in post-lung transplant patients with BOS has been shown to be of benefit.5-6 There are no studies on post-HSCT patients with BOS and its association with GERD.

This prospective observational study was done in patients with post-HSCT BOS to assess the presence of GERD by a Bravo capsule wireless pH monitoring system, and to determine the effect of proton pump inhibitors in stabilizing pulmonary function tests in patients with positive pH.

This is a prospective observational study, in which 7 patients with an established diagnosis of post-HSCT BOS, based on classic pulmonary function test and computed tomography chest findings according to the current diagnostic criteria,7 were evaluated for presence of GERD with a Bravo catheter-free radio pH capsule.8 Pulmonary function tests including forced vital capacity, forced expiratory volume in 1 second, maximum midexpiratory flow between 25% and 75% of vital capacity ration, and residual volume to total lung capacity ratio, were measured before the procedure began.

Technique of Bravo pH study: The pH capsule was introduced to the esophagus through an upper gastrointestinal endoscopy after calibrating the capsule in buffer solutions. A Bravo delivery system was used to place the capsule 6 cm proximal to the squamocolumnar junction, which corresponds to a distance of 5 cm above the proximal margin of the lower esophageal sphincter. The capsule was placed on the esophageal wall by applying suction and firing the retaining pin. Endoscopy confirmed attachment of the capsule. The receiver then was attached to the participants clothing. During monitoring, participants depressed buttons on the receiver to record symptomatic events and recorded the details of these events in a symptom diary. Participants were asked to keep a diary documenting times of food intake, recumbent body position, unusual symptoms of heartburn, chest pain, and regurgitation. Total acid exposure time, using pH values ≤ 4.0 in the distal esophagus, was used to quantify reflux. A DeMeester score (normal value < 14.72) also was calculated for each patient for day 1, day 2, and 48-hours total recording, using standard criteria including episodes > 5 minutes, longest acid reflux event, total distal esophageal exposure time, and fraction of time in a 24-hour period spent with pH < 4.0 (Table 1).

Those with positive reflux study were prescribed omeprazole, a proton pump inhibitor, in a dosage of 20 mg twice a day. Their routine medications, including immunosuppressive therapy and long-term azithromycin, were continued. Follow-up clinic visits were arranged at 3-month intervals with a repeat pulmonary function tests on each clinic visit. Pretreatment and posttreatment pulmonary function test values were recorded.

Six of 7 patients completed the BRAVO pH study for 48 hours, while 1 patient recorded only for 12 hours, owing to a technical failure. Five patients (4 men and 1 woman; mean age, 34.2 y) were reported to have positive results on an acid reflux study (Table 2). Three patients had severe reflux while 2 had mild reflux. Transient dysphagia and/or chest discomfort was reported by 3 patients. Mean pretreatment forced vital capacity, forced expiratory volume in 1 second, maximum mid-expiratory flow, and residual volume to total lung capacity ratio of this group were 3.2 (L), 1.9 (L), 1.07 (L/s) and 175.6 (% of predicted).

Follow-up pulmonary function tests at 3-month intervals failed to show any significant changes in the measured parameters (Table 3). Mean change in forced vital capacity, forced expiratory volume in 1 second, maximum mid-expiratory flow between 25% and 75% of vital capacity ration, and residual volume to total lung capacity were -0.05 (L), -0.16 (L), -0.14 (L/s), and +1 (% of predicted). P values for all observations were > .05 indicating stability of the pulmonary function tests (Figure 1).

While HSCT has given hope to many patients with acute and chronic leukemia, aplastic anemia, and rare immunodeficiency disorders, it is not without complications. About half of all patients that undergo HSCT achieve long-term disease-free survival, but a similar number develop significant complications. As early pulmonary complications of HSCT include infectious and noninfectious pneumonitis, acute graft-versus-host disease, chronic aspiration and pulmonary vascular thromboembolic disease, and the late complications including chronic graft-versus-host disease and BOS, are of a major concern.

The most commonly accepted view is an immunologic-mediated cascade that involves lymphocyte-mediated inflammatory and fibrotic processes that affect the epithelium and subepithelium of the airways, leading to narrowing and airflow limitation. Factors such as pulmonary infections and graft-versus-host disease with acid and nonacid aspiration may cause local bronchial wall injury, leading to up-regulation of focal immune response. This may explain the focal nature of the disease. Studies have shown that up-regulation of lymphocytic immunity is related to increased cyclic adenosine monophosphate in patients with BOS. One of the more consistently associated features seen in patients with post-HSCT BOS is the concomitant presence of graft-versus-host disease, which likely causes immune-mediated airway inflammation and fibrosis leading to progressive airflow obstruction. Several other factors are implicated in BOS pathogenesis or in its progression, such as allogeneic type of HSCT, older age of the recipient and the donor, air-flow obstruction before HSCT, early respiratory viral infection, a busulfan-based conditioning regimen, total body irradiation, methotrexate-based graft-versus-host disease prophylaxis hypogammaglobulinemia, cytomegalovirus infection, underlying diseases (especially chronic myeloid leukemia), and GERD.12-15

Bronchiolitis obliterans syndrome is a progressive disease with no definitive treatment, although augmentation of immunosuppressive medication and azithromycin might halt the progression of disease.16 The role of GERD in post-lung transplant BOS is recognized in some studies. While the incidence of GERD in lung transplant recipients is high at around 60% to 70%, because of multiple factors including vagal nerve injury, reduced mobility, esophageal dysmotility, and medications, it is considered to be a major factor in a subgroup of patients for the pathogenesis and progression of BOS.17-18 Fundoplication surgery for GERD in this subgroup of the patients has shown a beneficial effect.19

No studies have been published to show the effect of GERD and its treatment in post-HSCT patients with BOS. This is the first study to shed light on this subject showing a possible association of GERD with post-HSCT BOS. There may be a role of therapeutic intervention with proton pump inhibitors in stabilizing the pulmonary function in these patients. Although this study includes a small number of patients, it does highlight the need for a large, multicenter clinical trial to assess the role of GERD in pathogenesis and progression of post-HSCT BOS. The role of proton pump inhibitors and possible role of fundoplication surgery in patients with GERD and post-HSCT BOS should be evaluated. 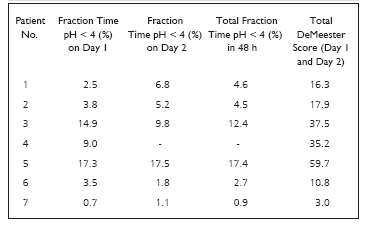 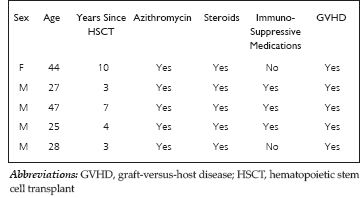 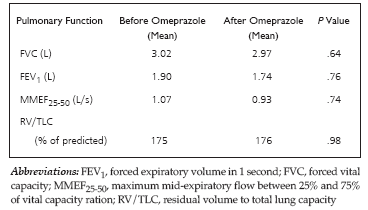 Table 3. Pulmonary Function Test Results Before and After Omeprazole Use 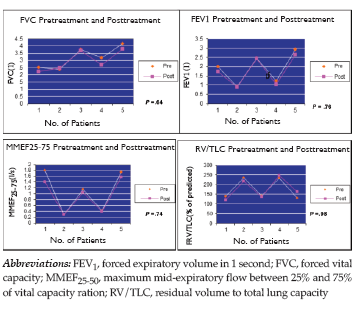 Figure 1. Pulmonary Function Test Parameters Before and After Treatment