Materials and Methods: In a single-center, retrospective study, 214 renal transplant recipients with chronic allograft dysfunction were investigated at a university hospital in Iran from 1997 to 2005. At each patient visit, kidney function was assessed using glomerular filtration rate and stage of disease.

Conclusions: In this method of survival analysis, we can determine a statistical model according to a real clinical model in renal transplant recipients with chronic allograft dysfunction. It enables us to determine the stage-specific hazard rates of disease progression. These findings can help nephrologists to understand the kidney disease process and better predict graft survival.

Globally, more than 500 million individuals, or about 1 in 10 adults in the general population, have some form of chronic kidney disease.1 Worldwide, more than 1.5 million people are currently alive through either dialysis or transplant.1 The cumulative global cost for renal replacement therapy is predicted to exceed US $1 trillion.1 In addition to its costs, chronic kidney disease leads to substantial patient morbidity and mortality. Unfortunately, many of these patients die before the initiation of renal replacement therapy.2-4 Kidney transplant is considered the treatment modality of choice for most patients with end-stage renal disease. Yet recent evidence demonstrates that despite optimistic earlier estimates, long-term outcomes have not greatly improved in these patients.5-8

For many chronic diseases, clinicians are interested in studying the prognosis of disease to understand the mechanisms of disease progression. It may often be natural to think that the development of many medical and health-related conditions can be characterized as underlying processes that go through a set of stages. For example, chronic diseases such as cancer or human immunodeficiency virus (HIV) and AIDS progress with time from an early stage (sometimes) through intermediate and advanced stages to death. The progression of cancer can be determined by the size of tumor and by metastasis. The progression of AIDS can be characterized by methods such as CD4 and CD8 T-cell counts. Marker covariates are often measured repeatedly over time, such that they may not even effectively influence the underlying process but may rather be a measure of how far this process has advanced. Several studies are among those that have proposed analyzing HIV progression by modeling CD4 cell counts using the Markov model.9-12 In another example, Escolano and associates13 used a 5-stage model to study hospital-acquired infections in intensive care units. Hansen and associates14 designed a 9-stage model to analyze liver transplant data. Other scenarios have been modeled by staging, including mortality in diabetes,15 treatment of burns,16 and treatment of diabetic retinopathy.17, 18 Graft loss owing to chronic allograft dysfunction is a major concern in renal transplant recipients.19, 20 Clinically, chronic allograft dysfunction is characterized by a progressive decline in the glomerular filtration rate (GFR) over time.21

Understanding the chronic kidney disease process in renal transplant recipients with chronic allograft dysfunction helps us to acquire knowledge and new insights about disease pathophysiology and the postoperative care of patients, which, in turn, will improve long-term graft survival. The aim of this study was to predict graft survival probability using stage-specific hazard rates. The statistical model was assumed according to a clinical 5-stage model for renal transplant recipients with chronic allograft dysfunction.

Staged progression based on clinical phases
Renal transplant recipients with chronic allograft dysfunction have a progressive decline in GFR, which was used to stage disease progression based on clinical phases according to the 5-stage model (Figure 1). We applied this staging system to determine pattern of disease progression per
stage in this group of patients, according to the National Kidney Foundation Kidney Disease Outcomes Quality Initiative classification of chronic kidney disease.23

Statistical model and parameters estimation
The phase-type distributions are appropriate tools for modeling survival time in situations where the overall survival time is a progression through several stages.24 We assumed the statistical model according to a clinical 5-stage model. Clinically, chronic allograft dysfunction is characterized by a decline in GFR over time, which in most of the studies can be described by linear or exponential functions.25-29 We found in many studies, that for data analysis use of the Markov property by modeling the exponential distribution is not unreasonable for multistage disease progression of cancer or chronic disease by Markov assumption.30-33 Therefore, we constructed the likelihood function using a time-homogeneous Markov model with a negative exponential waiting time (hereafter called time) in each stage (Table 1). The stage-specific hazard rates were estimated by maximizing overall likelihood to time to kidney failure, using the following formula:

Data were available for 214 renal transplant recipients with chronic allograft dysfunction; the mean time (± standard deviation) to start of the chronic allograft dysfunction process was 9.8 ± 2.4 months after transplant. Renal transplant recipients had 12 to 56 visits (creatinine clearance measurements) during the study. For 6870 patient visits and grading, 614 transitions between stages of GFR occurred during the study. Among 614 observed transitions, 457 were completed, and 157 were censored, because there was no change in the stage between the last 2 visits. Table 1 shows the time censoring and descriptive information.

The hazard rate for each stage was estimated at 534.576 per 1000 person-years according to equal assumed rates. It means that we expected an average of 22.5 months in each stage before the patient’s disease would progress to the next stage. According to unequal-assumed rates, estimated stage-specific hazard rates of disease progression were as follows: stage one, 453.936; stage two, 485.040; stage three, 545.808; and stage four; 649.488 per 1000 person-years.

Figure 2 shows the curves of survival function S(t) and hazard function h(t) for T, overall time for progression from stage 1 to kidney failure according to the hypoexponential distribution.

In this study, we determined stage-specific hazard rates according to the 5-stage model in renal transplant recipients with chronic allograft dysfunction. These results showed that the rate of progression between stages became greater in more-advanced stages, which means that the rate of progression from stage 1 to 2 was slower than progression from stage 2 to 3, and so on. This finding is compatible with the hyperfiltration theory in chronic kidney disease.38 According to this theory, loss of a number of glomeruli leads to hyperfiltration in remaining glomeruli. This hyperfiltration could destroy the remaining glomeruli, and this process could become more serious when the number of remaining glomeruli become fewer and fewer. We computed probability function, hazard function, mean, median, and other percentile for time to kidney failure in these patients using estimated stage-specific hazard rates. The mean and median times to kidney failure were 91.6 and 84 months. The 18th, 58th, 118th, and 155th months’ death-censored graft survival probabilities were 0.99, 0.75, 0.25, and 0.10. Kukla and associates28 found that the death-censored kidney survival in renal transplant recipients was 1-year 100%, 5-year 89%, and 9-year 50%. Consequently, using estimated GFR-based progression the half-life graft survival was 9.6 years. Sijpkens and associates29 assessed deterioration of kidney function with creatinine clearance at 6 months. They found the death-censored kidney graft survival in the group with a creatinine clearance above mL/s/m2 (> 50 mL/min/1.73 m2), with a negative slope of creatinine clearance after 6 months, to be 1-year 98% survival, 5-year 86%, and 8-year 87%.

Despite the former survival data analyses (nonparametric survival analyses that were preferred by researchers in the medical sciences), in this method of data analysis, we can determine statistical model according to a real clinical model in renal transplant recipients with chronic allograft dysfunction. It enables us to determine the stage-specific hazard rates of disease progression. These findings may help nephrologists to better understand the kidney disease process and improve graft survival prediction. 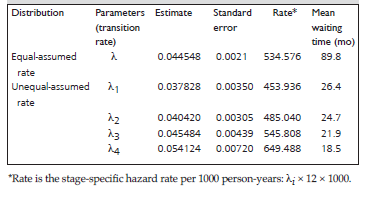 Table 3. Prediction of stage-survival probability over time, according to 2 models. 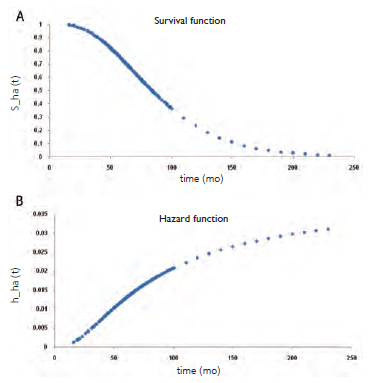 Figure 2. Survival function (A) and hazard function (B) curves for T, overall waiting time from stage one to kidney failure according to the hypoexponential distribution. Dots show the predictive value at times above 100 months, according to fitted distribution.