Patients and Methods: The 1-year patient and pancreas survival rates of 150 patients who had undergone simultaneous pancreas-kidney transplant were analyzed by the Cox proportional hazards regression model and the Kaplan-Meier method. Uni- and multivariate analyses were performed in terms of transplant-, recipient-, and donor-related risk factors.

Conclusions: Delayed kidney allograft function and intra-abdominal infection had an important effect on both patient and pancreatic allograft survival rates.

Recent data from the United Network for Organ Sharing and the International Pancreas Registry showed 1-year patient survival to be higher than 95% after simultaneous pancreatic-renal transplant (2, 3). Improved 1-year pancreatic allograft survival, which is related to patient outcome, is approximately 85%; prolongation of graft survival is attributed to decreases in technical failures (thrombosis, infection, pancreatitis, anastomotic leak, or bleeding leading to removal) and in immunologic failures (2). Patient death despite a previously functioning graft is reported to be among the most important categories of pancreatic graft failure after 1 year after transplant, accounting for approximately 50% of grafts considered to have failed after simultaneous pancreas-kidney transplant (2).

Patients
Between December 2000 and August 2006, 150 patients with a pretransplant history of insulin dependence underwent a simultaneous pancreatic-renal transplant at the Universidade Federal de São Paulo in Brazil. Of these diabetic patients, 95% had type 1 diabetes, while 5% had maturity-onset diabetes of the young or latent autoimmune diabetes in adults. In Brazil, pancreas and kidney allocation for simultaneous pancreatic-renal transplant is determined by time on a waiting list, which averages 2 years. Enteric drainage was performed in 143 patients, and 7 patients underwent bladder drainage. Iliac vein or vena cava anastomosis was performed in all patients. Belzer and Eurocollins solutions were used for pancreas and kidney preservation, respectively. Only beating-heart donors were selected for organ donation, with those over 45 years old or having a history of diabetes in first-degree relatives being excluded.

Immunosuppression and postoperative management
Perioperative antimicrobial prophylaxis consisted of ceftriaxone (1 g q 12 h) and ampicillin (1 g q 6 h) for at least 1 week until the abdominal drain was removed. During surgery, a bolus of 1 g methylprednisolone was administered. Heparin prophylaxis begun 12 hours after surgery was continued for 1 week unless bleeding occurred; subcutaneous maintenance dosages ranged from 10 000 to 15 000 U/day, to maintain activated partial thromboplastin times close to normal values. Aspirin therapy (100 to 200 mg/day) was begun on day 2 or 3. Postoperative immunosuppression, begun on day 2, included tacrolimus at doses of 0.15 mg/kg, adjusted according to interval after transplant (serum concentrations of 10-15 ng/mL for the first 30 days, 8-10 ng/mL between 31 and 90 days, and subsequently 5-10 ng/mL). Prednisone also was given (30 mg/day, with reduction by 5 mg each month until a maintenance dose of 5 mg/day was reached by the sixth month), as was mycophenolate mofetil (2 g/day) or mycophenolate sodium (1.44 g/day). Induction with mono- or polyclonal antibodies was reserved for repeat transplant when the panel reactive antibody was greater than 20% and for instances where renal cold ischemic time exceeded 24 hours.

Endpoints
Primary endpoints of the study were 1-year patient and pancreatic allograft survival rates. Secondary endpoints involved assessment of risk factors responsible for patient and pancreatic allograft survival rates. In general, all deaths within the first 90 days following transplant were assumed to be transplant-related.

As a matter of policy, we perform renal allograft biopsy when serum creatinine increases and/or diuresis decreases. A pancreatic allograft biopsy was performed only when unexplained hyperglycemia and/or persistently elevated serum amylase and lipase were noted.

Statistical analyses
All results are reported as the mean ± SD unless otherwise indicated. Statistical analyses were performed using SPSS software (Statistical Product and Services Solutions, version 12.0, SPSS Inc, Chicago, IL, USA). The Fisher exact test and an analysis of variance were performed for continuous variables, and the Pearson chi-square test was used for categorical variables. Correlation was assessed using a Pearson test and Cox proportional hazard regression. Log-rank analysis and Kaplan-Meier curves were used for analysis of patient and pancreatic allograft survival. For pancreatic allograft survival analysis, patient deaths were counted as graft losses irrespective of graft functional status at time of death. If the graft was removed before patient death, computation was carried out as for death with a nonfunctioning pancreas. To determine which conventional and transplant-related risk factors were associated with 1-year patient and 1-year pancreatic allograft survival, as well as with acute pancreatitis, IAI, or delayed renal graft function, all putative factors associated at P of .3 or less by univariate analysis were entered simultaneously in a backward binary logistic regression model with those factors analyzed as the dependent variable. Results were reported as odds ratio (OR) or hazard ratio (HR) with a 95% confidence interval. The statistical analyses were assumed significant for P values below .05.

Demographic data from recipients and donors are described in Table 1. One-year patient, kidney, and pancreatic allograft survival rates were 82%, 80%, and 76.7%, respectively. Mean time of death was 78.2 ± 82.1 days (range, 3-259 days). Most deaths (70.4%) occurred during the first 90 days after transplant; only 8 patients died later, mainly of infection in all instances.

The main cause of recipient death after transplant was sepsis (66.7%), with IAI being most frequent (55.6%), followed by pulmonary infection (44.4%). Other causes of deaths included hemorrhagic shock (18.5%) and cardiovascular complications (14.8%).

In this study, 1-year patient and pancreatic survival rates after simultaneous pancreatic-renal transplant performed at a single center were analyzed. We found that DGF involving the renal allograft, and also IAI, had important impacts on either patient or pancreatic allograft survival.

Surgical complications after simultaneous pancreatic-renal transplant occur in a third of cases at individual research centers, although data from United Network for Organ Sharing reported decreasing rates, as low as 6%, since 1988 (2, 12, 13). Occurrence of IAI, noted in 12% to 27.5% of pancreatic transplants, had a negative impact on pancreatic allograft survival, as in our patients (12-15). In some other reports, IAI had a negative impact on patient survival (12), but not in all (13). The main risk factor for IAI in our patients was DGF of the renal allograft, which could be explained partly by excessive immunosuppression in patients with dialysis or impaired renal allograft function after transplant, and also ischemia-reperfusion injury of the pancreatic allograft, as also can occur in the renal allograft.

We did not find a correlation between IAI and other reported risk factors, such as donor age greater than 45 to 50 years, cardio- or cerebrovascular donor death, donor or recipient BMI exceeding 30 kg/m2, and preservation time exceeding 24 hours (12, 14, 16-18). In Brazil, the age limit for deceased donors in pancreatic transplant is 45 years, although 1 Brazilian donor was 46 years old. Indeed, brain death in our patients was attributed to trauma in two-thirds, while mean BMI (donor or recipient) differed considerably from other reports; this could explain lack of association with IAI.

However, donor serum sodium and dopamine dose at time of donation, even if not directly affecting the incidence of IAI and vascular thrombosis, influenced pancreatic allograft survival. To our knowledge, this is the first report of association between donor serum sodium and pancreatic loss. The mechanism may involve direct damage to pancreatic allograft cells by hypernatremia. In liver transplants, for example, hypernatremia may adversely affect short-term outcome (19). In addition, dopamine may have worsened pancreatic hypoperfusion in the deceased donors, contributing to pancreatic cellular damage.

The association of acute kidney rejection with pancreatic allograft loss can be explained by effects of immunosuppressive therapy and possibly also by simultaneous acute pancreatic allograft rejection, although the latter possibility should be considered with caution since we did not perform pancreatic biopsies in most patients.

Acute pancreatitis, occurring in some 14% of our patients with enteric drainage as in previous reports (16), usually occurs in the immediate postoperative period and it is related to sepsis, ischemia-reperfusion injury, surgical trauma, or immuno­suppressive therapy. Although self-limited, pancreatitis can carry complications such as peripancreatic fluid collections or areas of necrosis, which can worsen infection and require drainage. In this study, the only risk factor associated with acute pancreatitis was peritoneal dialysis. Disagreement prevails as to whether peritoneal dialysis can predispose to infection after pancreatic transplant, and possible mechanisms require further characterization (20-22). Incidence of thrombosis among our patients (5.3%) was in agreement with previous studies (23). We could not identify any risk factors for either venous or arterial thrombosis. Thrombosis has been attributed to ischemia-reperfusion injury, surgical trauma, postoperative hypoperfusion, kinking of the pancreatic vessels, and endothelial injury to the pancreatic vasculature secondary to acute rejection. Risk factors described elsewhere include older donors, cardio- and cerebrovascular causes of brain death, left-sided pancreas implantation, and arterial reconstructions other than a Y-graft (23).

In conclusion, delayed kidney allograft function and IAI had an important impact on both patient and pancreatic allograft survival. Donor factors such as dopamine dose and serum sodium, as well as acute rejection and technical failure, affected pancreatic allograft outcome after simultaneous pancreatic-renal transplant. However, death with a functioning graft was the main category of pancreas graft loss. New strategies that should be implemented include optimization of donor care, changing focus from pancreas allograft salvage to preserving the patient’s in cases occurrences of IAI, and minimization of ischemia-reperfusion injury by use of anti-thymocyte globulin and pulsatile perfusion machines. 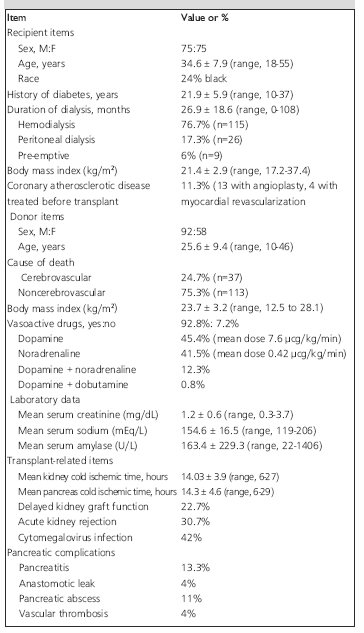 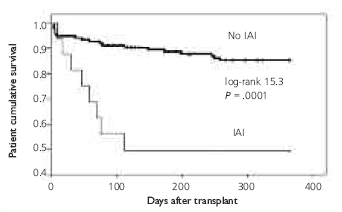 Figure 1. One-year patient survival in patients with versus without intraabdominal infection (IAI). 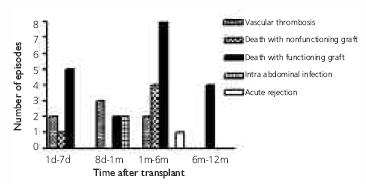 Figure 2. Causes of pancreas allograft losses during the first year after transplant, expressed as days (d) and months (m).