Objectives: Noninvasive monitorization of retinal structures of the eye could be a predictor for systemic microvasculature dysfunction in transplant recipients. In this study, our purpose was to determine the optic disc and peripapillary microvascular changes in pediatric patients who had undergone liver or renal transplant surgery.
Materials and Methods: The study was performed at Ba?kent University. The medical records were reviewed, and patients who had liver or renal transplant in the last 10 years and were between 4 and 18 years old were included in the study. The optic disc and peripapillary vascular density parameters were obtained by optical coherence tomography angiography (Avanti RTVue XR). The results were compared with the results from age-matched, sex-matched, and spherical equivalent-matched healthy subjects.
Results: Our study included 32 eyes of 16 liver transplant patients, 20 eyes of 10 renal transplant patients, and 64 eyes of 32 healthy participants (control). Whole image peripapillary, inside disc, peripapillary, superior and inferior hemisphere, and superior, inferior, temporal, and nasal quadrant peripapillary vascular densities were evaluated. No statistically significant differences in any parameter were noted between the healthy control group and the patient groups (P > .05 for all parameters).
Conclusions: Peripapillary vascular density measure-ments were not affected in pediatric renal and liver transplant patients.

Introduction
Transplantation has been a successful therapy for individuals with end-stage liver failure or end-stage renal failure for all ages, regardless of etiology. With the development of immunosuppressive medicines, as well as improvements in surgical methods and high-quality care, posttransplant survival rates have been increasing, and it has become necessary to follow up the patients after surgery.1,2 About 88% of renal transplant (RTX) patients show at least 1 ocular morbidity. Impaired visual acuity, keratoconjunctivitis sicca, pinguecula, arcus lipoides, cataracts, glaucoma, retinal drusen, hypertensive or atherosclerotic retinopathy, and the thinning of the peripapillary retinal nerve fiber layer are some of the ophthalmic problems that transplant recipients may experience.3 Ophthalmic findings have also been observed in patients with liver failure, and regression of these findings has been reported after liver transplant (LTX).4

The eye is a well-defined target organ, and its microvessel network can now be precisely mapped, measured, and tracked to monitor the systemic vascular status.5 The retinal arteriolar narrowing is a marker of microvascular damage,6 and this can be used to follow the course of transplant recipients. The development of optical coherence tomography angiography (OCTA) has made it possible to analyze the microvasculature in various retinal and choroid layers quickly and noninvasively without dye injection.7,8 The split-spectrum amplitude-decorrelation angiography (SSADA) algorithm was created to improve the performance of OCTA by detecting the movement of red blood cells within retinal and choroidal vessels to generate angiographic images of perfused vessels in both the perifoveal and peripapillary regions quickly, reliably, and noninvasively.8,9

Materials and Methods
This cross-sectional and observational study followed the principles of the Declaration of Helsinki and was approved by the local ethics commission (KA22/81). We retrospectively reviewed the medical records of 175 pediatric patients who had received LTX or RTX in Ba?kent University Hospital from January 2012 to December 2021.

The study included patients 4 to 18 years of age who underwent transplant and had comprehensive ophthalmologic examination findings. Patients with high myopia or hyperopia (refractive errors of 6 diopters or more); amblyopia; any history of ocular trauma or intraocular surgery, primary disease-related retinopathy, or additional vascular retinal systemic diseases; and uncontrolled systemic disease (such as diabetes, hypertension, or coagulopathy) were excluded from the study.

The AngioVue software of the OCTA device (Avanti RTVue XR, version 2017.1.0.151; Optovue Inc.) was used to obtain all OCTA scans. This system acquires OCTA volumes consisting of 400 × 400 B scans with the SSADA method and performs at a rate of 70?000 A scans per second. Between cross-sectional scans, the SSADA algorithm differentiates the movement of red blood cells inside the lumen of retinal and choroidal arteries. Signal amplitude variation differences in nonstatic tissue versus static tissue allow the SSADA method to distinguish perfused retinal vessels from surrounding static tissue.11 Patients with low signal strength of OCTA (<6/10), blink artifacts, motion artifacts cause by poor fixation, or media opacity that impedes vasculature vision were excluded from the study.

The disc OCTA was performed in a 4.5 × 4.5-mm area around the optic disc. The optic disc and peripapillary capillary vascular density (VD) parameters were automatically obtained with the OCTA device. The VD values are reported as the percentage of the total area occupied by blood vessels.12

Results
In this study, we reviewed the medical records of 175 pediatric patients with LTX or RTX who were seen at our center from January 2012 to December 2021. There were 88 LTX recipients and 87 RTX recipients. With the exclusion criteria, 32 eyes of 16 LTX patients (group 1: 11 male, 5 female) and 20 eyes of 10 RTX patients (group 2: 4 male, 6 female) were included the study. The control group consisted of 64 age-matched and sex-matched eyes of 32 healthy participants (group 3: 16 male, 16 female). The etiological disease of liver and renal failure of the patients is shown in Table 1.

When OCTA parameters were compared, there were no statistically significant differences in the whole image peripapillary, inside disc, and peripapillary VD values between the experimental groups and the control group. Similarly, there were no statistically significant differences at the hemispheres or at the quadrants of peripapillary VD values between the groups. P > .05 for all parameters (Figure 2 and Figure 3). The results and the P values are shown in Table 2 and Table 3.

In patients with liver and renal failure, microcirculatory dysfunction has been previously shown.4,16-18 Furthermore, retinal arteriolar narrowing was found to be positively associated with decreased kidney functions independent of diabetes and hypertension, and retinopathy was shown to be predictive of chronic kidney disease development.10,19 In addition, patients with cirrhosis have significant chorioretinal abnormalities. Interestingly, these chorioretinal abnormalities are dynamic and largely reversed after LTX.4 Although reduced renal function is strongly associated with low endothelial surface layer dimensions, after successful RTX, the endothelial surface layer has been shown to return to a near-normal state, and in this manner, the arterial stiffness index has been shown to be reduced.20,21

As ophthalmologists, we have a valuable tool in the form of OCTA, which can quickly detect changes in the retina’s microvasculature that can affect systemic circulation, among other things. It may be possible to use OCTA to identify and track chorioretinal alterations in the eye and thereby act as a proxy for renal and extrahepatic microcirculations. In this study, we aimed to investigate the microvascular changes in the optic disc and peripapillary area in pediatric transplant patients by using the OCTA device.

Our study showed that the optic disc and peripapillary VD measurements were not affected in pediatric LTX and RTX patients. We found no statistical differences for VD values of optic disc and peripapillary area between the transplant groups and the control group. This can be explained by the normalization of microcirculation dysfunction seen in patients with liver and kidney failure after successful transplant. However, it was impossible to clearly predict these microcirculatory changes in our study because there were no preoperative OCTA parameters in our study.

Our study has some limitations. It has a retrospective design and small sample size. Another significant limitation of this study was that the effects of medical treatments (such as steroids or nonsteroidal immunosuppressants) were not investigated.

In conclusion, although our study has some significant limitations, this is the first study to evaluate peripapillary VD alterations in LTX and RTX patients and to compare these with the results from a healthy control group. There were no significant changes in the VD values of the optic disc and peripapillary region in this study. If supported by future studies and research, then comparison of OCTA values before and after transplant may demonstrate more valuable results in similar etiological cases.

From the 1Department of Ophthalmology and the 2Department of General Surgery, Division of Transplantation, Baskent University Faculty of Medicine, Ankara, Turkey
Acknowledgements: The authors have not received any funding or grants in support of the presented research or for the preparation of this work and have no declarations of potential conflicts of interest.
Corresponding author: Gülşah Gökgöz, Başkent University, Faculty of Medicine, Department of Ophthalmology, Bahçelievler, 53. Sk. No:48, 06490 Çankaya/Ankara, Turkey
Phone: +90 544 498 14 56
E-mail: g.tanrias@hotmail.com 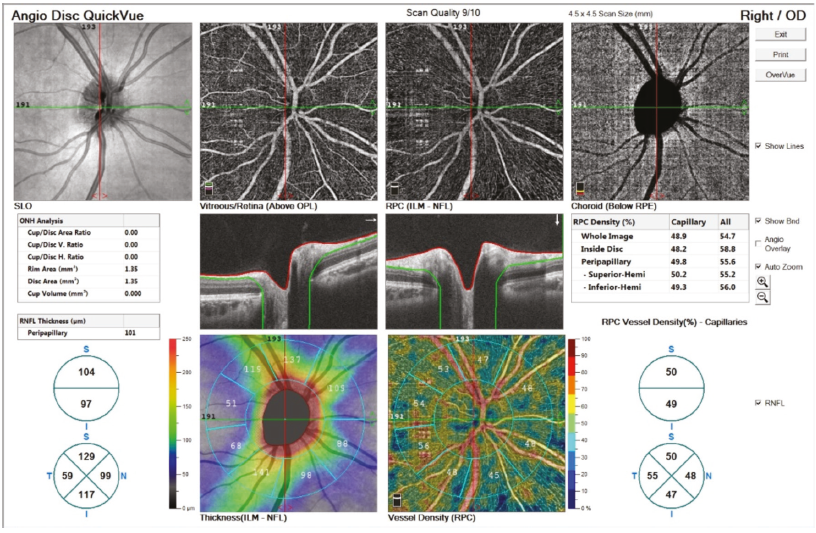 Table 1. Etiology of Liver and Renal Failure in the Study Patients 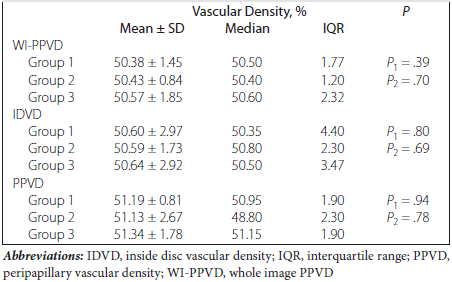 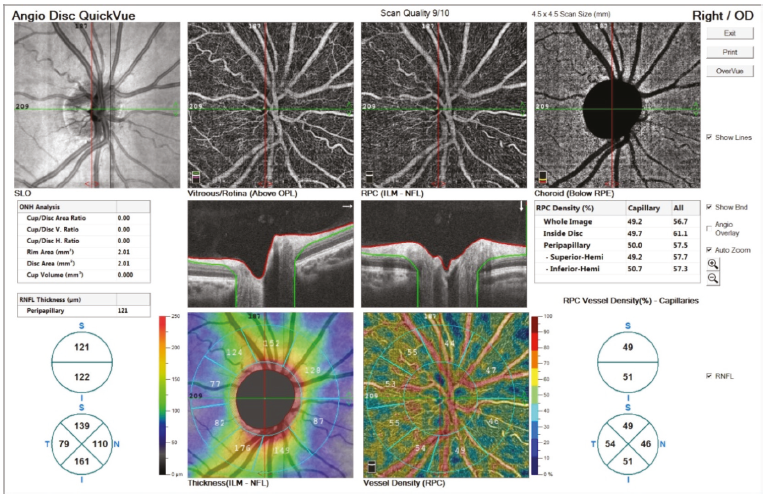 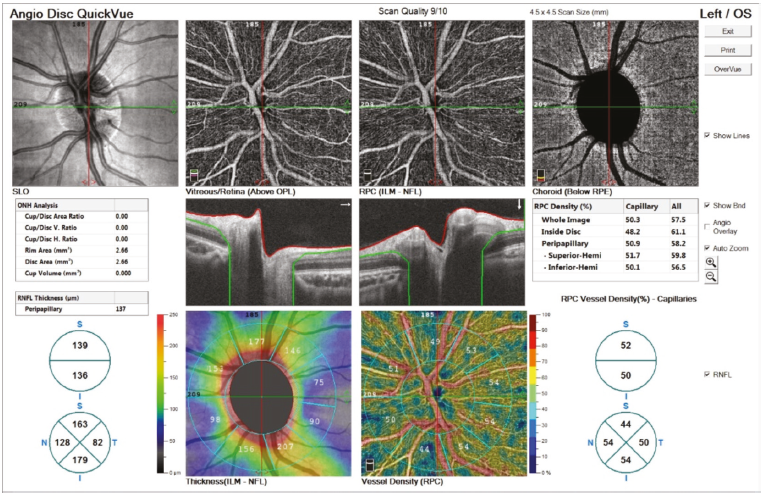 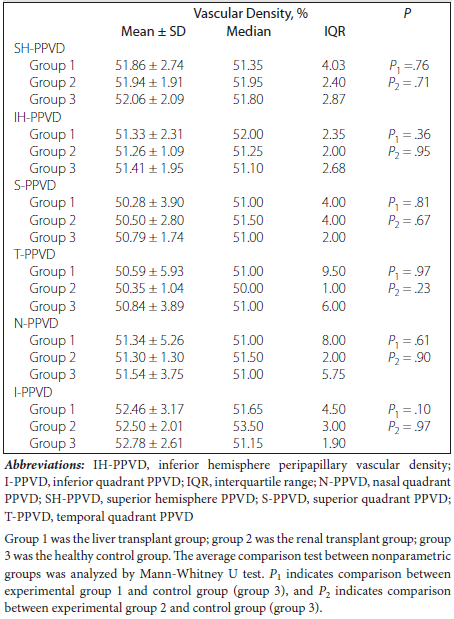