Hepatoblastoma is the most common primary liver cancer of childhood, accounting for approximately two-thirds of all malignant liver tumors in the pediatric population and having an increasing rate of incidence over the past 30 years.1 Surgical removal in combination with chemotherapy is essential for curative treatment of hepatoblastoma. Complete margin-negative surgical resection is the goal of treatment.2 However, 60% of patients are unresectable at diagnosis and 15% to 20% of initially unresectable tumors remain unresectable despite neoadjuvant chemotherapy.3,4 Liver transplant (LT) as a primary treatment option can be curative in patients with unresectable disease.2 Hepatoblastoma may recur as isolated local disease after complete resection. Children who experience relapse after resection or who have had incomplete resection are also candidates for LT, which is defined as “rescue” or “salvage” transplantation.5

Here, we present a patient who underwent salvage LT for the treatment of local recurrence of hepatoblastoma. Written informed consent was obtained from the patient’s parents for publication of this case report.

A 13-year-old boy who was diagnosed with hepatocellular carcinoma arising from the left liver lobe and who had been treated with surgical resection in another health facility was admitted to our outpatient oncology clinic for further evaluation as serum alpha-fetoprotein (AFP) levels had started to increase following a dramatic decrease after surgery. Medical records of the patient revealed that liver tumor had been staged as pretreatment extent of disease (PRETEXT) I localized to the left liver lobe. In an attempt to achieve complete tumor resection, a left hemihepatectomy had been performed. The patient’s serum AFP level was >80 000 mg/L at diagnosis, which had decreased to a minimum of 576 mg/L before it started to increase.

Histopathological reexamination of the hemihep-atectomy material in our institution showed a histological aspect of an epithelial hepatoblastoma rather than hepatocellular carcinoma. Magnetic resonance imaging of the abdomen showed multifocal lesions in the remaining right liver lobe, which was compatible with local recurrence of hepatoblastoma. He was treated with the International Childhood Liver Tumor Strategy Group (SIOPEL 3 study) high-risk hepatoblastoma protocol, which included cisplatin alternated with carboplatin and doxorubicin. A favorable initial response to chemotherapy was obtained, as shown by normalized serum AFP levels and regression of hepatic lesions. However, after the patient completed the chemotherapy regimen, the tumor showed progression, as evidenced by regrowing multifocal lesions in the right liver lobe and increased AFP levels. A positron emission tomography with 2-deoxy-2-(fluorine-18)fluoro-D-glucose revealed normal fluoro-D-glucose activity without any sign of metabolically active disease.

The patient immediately underwent a comprehensive transplant evaluation by the pediatric transplant team, including specialists in hepatology, oncology, radiology, and transplant surgery. The evaluation concluded that the patient was a viable candidate for an urgent LT. The patient received cisplatin and fluorouracil combination chemotherapy until a suitable donor was found. The patient underwent right lobe living donor LT without any immediate and short-term complications. Embryonal-type epithelial hepatoblastoma was confirmed with histopathological evaluation of the liver explant (Figure 1). At 7 months posttransplant at the last follow-up visit, the patient showed excellent graft function without any complications or signs of malignancy. The patient remains closely followed with regard to graft function and recurrence of hepatoblastoma after LT.

Advances in chemotherapy, postoperative care, and surgical treatment, including LT, have significantly improved the prognosis of children with hepatoblastoma, with reported 10-year overall and disease-free survival rates of 84% and 82%, respectively.6 The curative treatment of hepatoblastoma in children relies on margin-negative surgical resection with a critical role of neoadjuvant chemotherapy in downstaging the initially unresectable tumor, making complete resection possible in locally advanced disease. The PRETEXT classification is the accepted worldwide standard to assess the surgical resectability of hepatoblastoma by evaluating the location and extent of the disease in the liver.7 In general, more localized PRETEXT I and II disease is surgically resectable, whereas PRETEXT III and IV disease involving 3 to 4 sections of the liver might remain unresectable despite adequate neoadjuvant chemotherapy, necessitating a total hepatectomy with subsequent LT.2 Other indications of LT in children with hepatoblastoma are incomplete resection or relapse after resection as was the case in our patient.5

Our patient had local recurrence following left hemihepatectomy. The SIOPEL group reported the clinical characteristics and outcomes of patients with hepatoblastoma who relapsed after inclusion into the first 3 SIOPEL trials.8 The incidence of relapse in patients who had achieved a complete remission after first-line treatment was 11% (59/524), among whom 21 patients (36%) had isolated local relapse. The overall incidence of local relapse was as low as 4% (21/524) in patients with complete remission.8 Small residual tumor foci in patients with initially multifocal lesions and microscopic residual disease in patients with initially unifocal disease were hypothesized as possible reasons for local recurrence in these patients. A combined treatment with surgery and platinum-containing chemotherapy was suggested by the authors in case of a relapse.8 We can speculate that our patient had a microscopically multifocal disease at the time of diagnosis rather than a localized PRETEXT I disease as his serum AFP level never returned to normal levels as expected following surgery.

Over the past 2 decades, LT has emerged as an important treatment option for unresectable hepatoblastoma. A 20-fold increase in LT procedures for hepatoblastoma has been reported, while the frequency of hepatoblastoma cases have increased 4-fold during the same period.9 Long-term survival is excellent even when LT is required to achieve complete resection. The overall 5-year survival has been reported to be equivalent for patients who have had resection (85.6%) versus primary LT (86.5%).10 Salvage LT outcomes were initially reported to be inferior compared with primary LT outcomes (30% to 41% vs 82% to 85%).11 However, recent studies have been reporting acceptable outcomes for salvage LT in the setting of recurrent disease following resection. A recent Japanese study demonstrated a 5-year overall survival rate of 73% for salvage LT, which was similar to their 5-year survival rate of 69% for primary LT.12 Even better outcomes for salvage LT with event-free survival rates of 85% and 74% at 1 and 3 years, respectively, which were not significantly different than primary LT, have been reported in 2022 using the database of the Society of Pediatric Liver Transplantation.13

In Turkey, LT has also been increasingly used in the treatment of hepatoblastoma. There are 2 recent pediatric studies from Turkey that have reported good clinical results with orthotopic LT in the treatment of unresectable hepatoblastoma.14,15 Kirnap and associates have reported the results of 6 children (3 with PRETEXT III and 3 with PRETEXT IV disease) who underwent living donor LT following neoadjuvant chemotherapy. Five of the patients were free of tumor recurrence at a median follow-up of 30 months with only 1 patient displaying a pulmonary metastasis at postoperative 2 months.14 Okur and associates have shared their experience in 10 children (5 with centrally placed PRETEXT III and 5 with PRETEXT IV disease) and reported a posttransplant survival rate of 90% with a median follow-up of 32 months.15 Together, in both studies, all but 1 patient received living donor LT, which is an important option in countries having an insufficient number of deceased donors. The results of these studies have not only indicated a good survival rate following primary LT for hepatoblastoma but also have underscored the use of LT in the treatment of centrally located tumors.

In conclusion, salvage LT is a lifesaving and sometimes the only treatment option for patients with local recurrence of hepatoblastoma. Although transplant in the salvage setting has been associated with worse outcomes than primary transplant, recent data have indicated more favorable and acceptable outcomes. Further studies are warranted to better understand the role of salvage LT in the treatment of hepatoblastoma. Early consultation with the LT team is critical in children who are most likely to need extreme resection or LT. 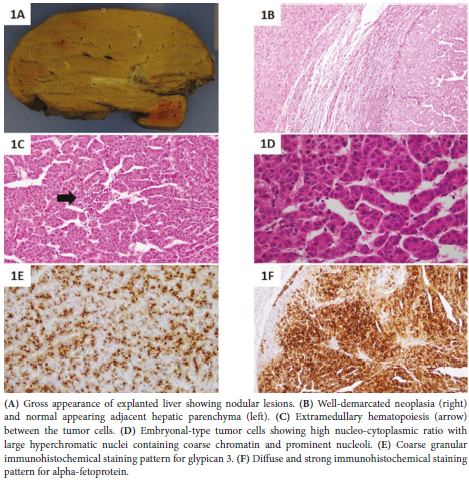