Substantial evidence shows that late antibody-mediated rejection (ABMR) triggered by donor-specific antibodies (DSA) remains a major clinical challenge and one of the main causes of allograft failure in renal transplant recipients.1 Late ABMR is diagnosed based on the detection of DSAs, an elevated means fluorescence index (MFI) value, acute and/or chronic immune-complex mediated lesions of endothelial cells, and abnormal kidney function test.1-3 Conventional immunosuppressive regimens, including plasmapheresis, intravenous immunoglobulin, bolus methylprednisolone, and rituximab, have been reported to be efficacious in halting the progression of ABMR in the early course of transplantation, but long-term graft failure remains a major challenge.4,5

The pathogenesis of late ABMR is a multifactorial process that starts with the formation of DSAs against the human leukocyte antigen (HLA), triggering a cascade of molecular reactions and contributing to tissue injury and subsequent development of the late ABMR.3,4 Recent studies have suggested that blocking the complement cascade at multiple levels may be a promising method to prolong graft survival in renal transplant recipients.1,4 One such example is eculizumab, which has proved to be quite effective in decreasing morbidity and mortality in patients with atypical hemolytic uremic syndrome.6

The detailed demographic, clinical, and laboratory features of the patients are shown in Table 1.

Case 1
An unsensitized 12-year-old male patient had presented with chronic renal disease secondary to vesicoureteral reflux and received a related-living donor kidney transplantation in 2018. Before renal transplant, his panel reactive antibody was negative. He received conventional induction therapy consisting of prednisolone, mycophenolate mofetil, and tacrolimus at standard doses. After transplant, his renal function test was stable with an estimated glomerular filtration rate of >85 mL/min/1.73 m2. Eleven months posttransplant, the patient presented with abnormal kidney function tests. His DSA was positive, MFI value was 13 000, and renal biopsy showed a strong complement C4d positivity in the peritubular capillaries, glomerulitis, and capillaritis. His complement C3 level was normal. The patient was diagnosed with late ABMR.

The patient was started on a conventional immunosup-pressive regimen, including steroid boluses, plasmapheresis, intravenous immunoglobulin, and rituximab. Despite conventional immunosuppressive regimens, signs of rejection persisted. The patient was then treated with 2 doses (1200 mg) of eculizumab and continued with maintenance immunosuppressive therapy. After the eculizumab treatment, his urine output increased, MFI value dropped below 3000, and serum creatinine level decreased from 3.8 to 1.5 mg/dL. Since then, his clinical course has been favorable, and he maintains a basal creatinine level of 1.3 mg/dL.

Case 2
An unsensitized 16-year-old male patient with kidney failure secondary to posterior urethral valve had undergone related-living donor kidney transplantation in 2017. Prior to the renal transplant, he had been on regular hemodialysis and his panel reactive antibody was negative. Induction therapy was performed with prednisolone, mycophenolate mofetil, and tacrolimus at conventional doses. After the transplant procedure, his renal function test was stable with an estimated glomerular filtration rate of >90 mL/min/1.73 m2. Two years posttransplant, his renal function test gradually deteriorated. His detailed laboratory examination revealed an MFI value of 13 000 and detection of DSA. His renal biopsy revealed a strong complement C4d positivity in the peritubular capillaries, glomerulitis, and capillaritis. The patient was diagnosed with late ABMR.

The patient was started on a conventional immuno-suppressive regimen, including steroid boluses, plasma-pheresis, intravenous immunoglobulin (2 g/kg), and rituximab at conventional doses. Despite conventional immunosuppressive regimens, signs of rejection persisted. The patient was then treated with 2 doses (1200 mg) of eculizumab. After the eculizumab treatment, his urine output increased, the MFI value dropped below 2000, and his serum creatinine level decreased from 2.1 to 1.01 mg/dL. His clinical course has been favorable, and he has continued with maintenance immunosuppression therapy. Currently, he maintains a basal creatinine level of 1.2 mg/dL.

In both cases, eculizumab therapy effectively reduced the markers for late ABMR and improved kidney function thereafter. González-Roncero and colleagues reported 2 cases of early renal graft ABMR, where, despite conventional immunosuppressive treatment, signs of rejection persisted in the patients. On the first day of eculizumab treatment, their urine output gradually increased, with creatinine level steadily decreasing in the following days.8 Similarly, Stegall and associates also reported the efficacy of eculizumab treatment in the prevention of early ABMR in 26 highly sensitized kidney transplant recipients. Their findings showed that early ABMR can be prevented under continued complement blockade by eculizumab therapy.9

Substantial evidence has shown that DSA-mediated complement activation has a tremendous deleterious impact on long-term graft survival along with noncomplement-mediated graft injury. Complement activation triggered by an immune complex undergoes a series of cascade events, forming C3 and C5 convertases for the activation of C3 and C5, respectively. Complement C5 is converted into C5a and C5b by C5 convertase. Complement C5b is the first component to initiate the assembly of MAC.1,5-7 The entire cascade plays an important role in the DSA-mediated inflammatory response, endothelial cell activation, and irreversible tissue injury in patients with late ABMR.1,8 Eculizumab inhibits the terminal pathway by binding to complement protein C5 in a 0.5:1 molar ratio, thus preventing the formation of anaphylatoxin C5a and MAC.1,8 Several anecdotal reports and case series have demonstrated the efficacy of targeting complement activation for an early prevention and treatment of ABMR in kidney transplant recipients.1,8-10

Thus, the surge of inflammatory response, endothelial cell activation, and immune-mediated graft injury can be controlled by effectively blocking the complement pathway. Hence, an early initiation of eculizumab treatment as primary therapy along with the conventional immunosuppressive regimen is safe and effective for late ABMR in kidney transplant patients.

From the 1Department of Pediatric Nephrology and the 2Department of General Surgery, Division of Transplantation, Baskent University Faculty of Medicine, Ankara, Turkey
Acknowledgements: The authors have not received any funding or grants in support of the presented research or for the preparation of this work and have no declarations of potential conflicts of interest.
Corresponding author: Meraj Alam Siddiqui, Department of Pediatrics, Başkent University Faculty of Medicine, Ankara, Turkey
Phone: +90 5078280649
E-mail: siddiqui@baskent.edu.tr

Table 1. Demographic, Clinical, and Laboratory Features of the Patients 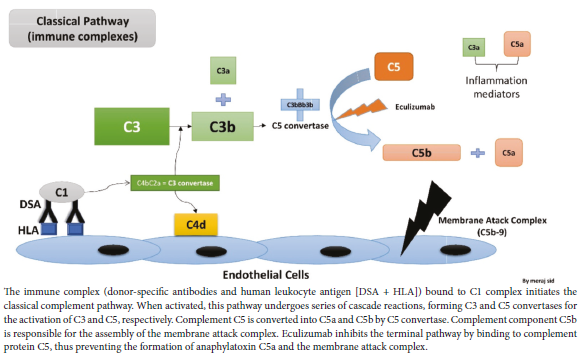