Abstract
Ciliopathies are a heterogeneous group of diseases that are observed after deterioration of the ciliary structures on the cell surface that facilitate communication with the environment. Both liver and kidney involvement are frequently observed in this disease. Recently, a doublecortin domain containing protein 2 (DCDC2) mutation in a ciliopathy disease group was identified. Here, we present 2 patients with this mutation and with neonatal cholestasis and renal involvement.

Introduction
Cilia are microtubule-based structures on the mammalian cell surface that facilitate communication between cells and their surroundings. Ciliopathies are a group of hereditary disorders that result from ciliary disruption. This group of diseases is also called “hepatorenal fibrocystic disorders,” and patients with these diseases mostly present with both liver and kidney involvement. Ciliopathies can cause polycystic kidney disease and nephronophthisis in the kidney, as well as cysts, fibrosis, and abnormal bile ducts with ductal plate malformation in the liver.1-3 Doublecortin domain containing protein 2 (DCDC2) is a cholangiocyte structural and signaling protein that is generally located in the cytoplasm and cilia.4 Mutations of DCDC2 are a newly identified subgroup of ciliopathy.

Here, we have presented 2 patients with DCDC2 mutations who showed neonatal cholestasis and developed unexpected kidney disease during the follow-up period.

Case Report
Patient 1
A 5-year-old male patient was referred to our center for upper gastrointestinal bleeding. Family history revealed consanguinity between parents and a brother who died at the age of 3 months with jaundice and fever. The patient had been investigated at another hospital for neonatal cholestasis at the age of 20 days. Although liver biopsy revealed compatible findings with biliary atresia, which had been performed when the patient was 2 months old, this diagnosis could not be supported by hepatobiliary scintigraphy. Physical examination revealed hepatomegaly and massive splenomegaly at admission. Upper gastro-intestinal endoscopy showed esophageal varices, and band ligation was applied to the varicose veins. The second liver biopsy showed results compatible with congenital hepatic fibrosis. Because of recurrent severe variceal bleeding, distal splenorenal shunt was preferred for the treatment of portal hypertension. A frameshift mutation in DCDC2 was detected in the patient by whole-exome sequencing analysis during follow-up.

At the age of 11 years, patient 1 was admitted to the pediatric surgery department with ileocolic intussusception. Pathologic examination of lymph node biopsies confirmed a diagnosis of Burkitt lymphoma. The patient developed chronic renal failure, and thus hemodialysis was required during the chemotherapy period. Synthetic liver functions gradually deteriorated. In addition, severe cholestasis and intermittent hepatic encephalopathy were observed during this period. Splenorenal shunt was functional, and a Doppler ultrasonography detected occlusion of the portal vein. The laboratory findings at admission and before transplant are shown in Table 1.

The patient underwent combined kidney and liver transplant for renal failure and severe liver disease at the age of 14.5 years. In the follow-up, he had uneventful kidney and liver graft functions.

Patient 2
A 1.5-year-old female patient was admitted to our center with neonatal cholestasis. Family history revealed consanguinity between parents. On physical examination, she had jaundice and hepatomegaly. Abdominal ultra-sonography revealed heterogeneous liver parenchyma and dilatation of the intrahepatic bile ducts. Liver biopsy showed chronic cholestatic liver disease. Unfortunately, the patient did not come to our clinic regularly for 4 years.

Patient 2 was readmitted to the hospital at the age of 6 years because of a mass in the right kidney. On physical examination, she had jaundice, hepatosplenomegaly, and clubbing. Laboratory evaluations revealed signs of hypersplenism and impaired liver function. Renal ultrasonography revealed an increased size of the right kidney and a 72 × 54-mm cystic mass with necrotic content in the upper pole parenchyma. Drainage and excision of the cyst were performed. Biopsy was consistent with changes secondary to pyelonephritis, and Escherichia coli growth was shown in the cyst fluid. A liver biopsy revealed biliary-type cirrhotic liver characterized by cholestasis and ductopenia. Broad-spectrum antibiotherapy was given for the infected renal cyst. A homozygous mutation in DCDC2 (c.656C>G p.Pro2219Arg) was detected by whole-exome sequencing analysis after the operation.

The patient underwent liver transplant at the age of 6 years. The laboratory findings at admission and at the time of transplant are shown in Table 2.

Discussion
The primary cilia in cholangiocytes regulate bile osmolarity, bile flow, and proliferation of secretory cells.5-7 DCDC2 is in the class of microtubule-associated proteins and responsible for regulating the microtubule network by modulation of ciliary signals in cholangiocytes.8-10 Girard and colleagues showed that DCDC2 mutations affect cholangiocyte expression, localization, and stabilization.4 Mutations of DCDC2 in 2 pairs of cortin domains have been reported to be associated with liver fibrosis and inflammation of cholangiocytes.4,9 There are few publications on patients with DCDC2 mutations in the literature. Grammatikopoulos and colleagues identified 7 individuals with protein-truncating DCDC2 mutation by retrospective genetic analyses of patients with neonatal sclerosing cholangitis.11 The investigators identified loss of both acetylated alpha-tubulin and DCDC2 expression, suggesting abnormal development of primary cilia in patients with DCDC2 mutations and neonatal sclerosing cholangitis. It may be speculated that dysregulation of the homeostatic mechanism of the cholangiocyte and a cytotoxic bile could be leading factors for the development of sclerosing cholangitis.11

Both of our patients presented with neonatal cholestasis. Although clinical and histopathologic findings were compatible with biliary atresia in patient 1, hepatobiliary scintigraphy did not support biliary atresia. Extrahepatic bile ducts were found to be sclerotic in the explant liver of this patient.

Ciliopathies can cause a wide spectrum of renal disorders, including urinary concentration impairment, autosomal-dominant and autosomal-recessive polycystic kidney disease, nephronophthisis, medullary sponge kidney, and cystic dysplastic kidney.3 In the literature, renal involvement was only reported in 2 of 15 ciliopathy cases with DCDC2 mutation. Schueler and colleagues9 performed homozygosity mapping and whole exome sequencing in 100 consanguineous or sibling cases to examine the diagnostic criteria of nephronophthisis-related ciliopathies for additional causative mutations. They identified recessive truncating mutations in DCDC2 as a cause of renal-hepatic ciliopathy in 2 patients who had severe, early-onset liver fibrosis. One of these patients had not yet developed kidney disease at 9 years of age, but the other one developed kidney disease at 14 years of age during follow-up.9 Our patients also developed renal pathologies during follow-up. Patient 1 developed chronic renal failure while receiving chemotherapy for Burkitt lymphoma. The assumption was that the damage to the kidneys by ciliopathy was the reason behind the kidneys being heavily affected by chemotherapy. Patient 2 had a cystic lesion in the right kidney, which may have been a sign of ciliopathy. The predominance of early and severe hepatic involvement compared with kidney involvement is quite interesting in DCDC2 deficiency. It could be related to the organ-specific ciliary dysfunction of the gene in which the mutation occurs in ciliopathies. The absence of a renal disorder at presentation does not exclude the possibility of renal involvement later in life.

In primary ciliopathies, the liver parenchyma is mostly unaffected and synthetic liver functions are preserved. The primary consequences of noncirrhotic fibrosis and dilated cystic ducts are portal hypertension, cholestasis, cholangitis, and (rarely) cholangiocarcinoma. Recurrent cholangitis, severe cholestasis, and complications related to portal hypertension are the main indication for liver transplant. Patients with ciliopathies have a wide spectrum of renal disease, with approximately half with renal disease developing renal failure before adulthood and requiring kidney transplant. Most patients with ciliopathies who require organ transplant receive kidney transplants (85%). The rates of liver transplant and combined liver-kidney transplant in these patients have been reported as 10% and 5%, respectively.12

Conclusions
Ciliopathies show broadly heterogeneous phenotypic presentations, including liver and kidney disorders. The DCDC2 mutation is currently described as a recessive disease that leads to ciliopathy. Although different hepatic and renal disorders associated with variants in DCDC2 have been described in the literature, biliary tract inflammation with scarring and cholestasis predominates clinically in patients with the DCDC2 mutation. The absence of renal involvement in the presentation does not exclude that the affected individual may develop renal involvement later in life. Most patients with ciliopathies will eventually require solid-organ transplant.

From the 1Department of Pediatric Gastroenterology, the 2Department of Medical Genetics, and the 3Department of Transplantation Centre, Gazi University Faculty of Medicine, Ankara, Turkey
Acknowledgements: The authors have not received any funding or grants in support of the presented research or for the preparation of this work and have no potential declarations of interest.
Corresponding author: Demet Teker Düztaş, Emniyet, Gazi University Hospital, 06560 Yenimahalle/Ankara, Turkey
Phone: +90 506 264 96 68
E-mail: demettduztas@gmail.com 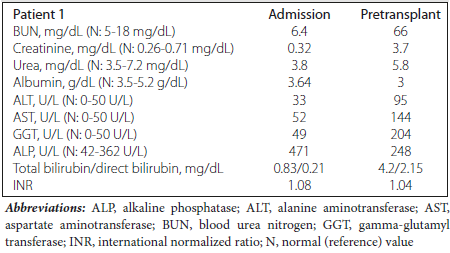 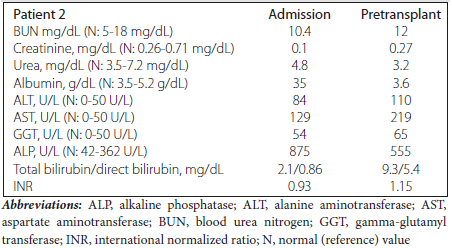