Introduction
Use of postoperative analgesia in kidney transplant recipients has always been challenging due to several issues: potential nephrotoxicity of nonsteroidal anti-inflammatory drugs1 and the reduced clearance of morphine metabolites due to transient renal impairment.2 Moreover, many patients with end-stage renal disease on dialysis are hepatitis C or hepatitis B virus positive, and the use of other effective analgesics, such as acetaminophen, is limited. Therefore, despite many undesirable effects, opioids remain the main tool of most postoperative analgesia regimens. However, opioid-sparing multimodal postoperative analgesia can provide better pain control and early activation, reduce hospital stay time, and reduce the incidence of postoperative ileus.3 The use of regional analgesia methods for postoperative analgesia can also be a useful option for more adequate control in these patients. Currently, methods of fascial trunk nerve blocks (including rectus sheath block, different types of transversus abdominis plane block, and erector spinae plane [ESP] block) have been shown to be effective components of multimodal anesthesia in various fields of surgery.4,5 In this study, we evaluated the effectiveness of ESP block in the postoperative period after kidney transplant.

Materials and Methods
This study was conducted at the Republican Research Centre of Emergency Medicine (RRCEM), Tashkent, Uzbekistan. Our study included 28 patients (all were male patients) who had undergone kidney transplant between March 2021 and September 2021. The study was conducted according to the guidelines of the Declaration of Helsinki and approved by the Institutional Review Board of RRCEM. All patients had end-stage renal disease due to chronic glomerulonephritis and physical status of class 3 on American Society of Anesthesiologists classification. All patients had undergone heterotopic kidney transplant from living related donors by the same surgical team. General anesthesia (induction: propofol 2-2.5 mg/kg; maintenance: isoflurane 0.8-1.5 vol% and fentanyl 4-6 µg/kg/h) was used for all surgeries. Standard intraoperative monitoring included assessment of pulse, noninvasive blood pressure, oxygen saturation, body temperature, and end-tidal CO2.

For our comparison, we had 2 patient groups: a control group and a study group. The retrospective control group (n = 14) included patients who had received conventional postoperative analgesia with intravenous acetaminophen 1 g every 8 hours and intravenous metamizole sodium 1 g every 8 hours. Patients in the study group (n = 14) underwent ultrasonograph-guided ESP catheterization at the T10 or T11 level before induction of anesthesia (Figure 1). Initially, 20 mL of 0.25% and then 20 mL of 0.125% bupivacaine were administered via the ESP catheter every 6 hours postoperatively over 24 hours. For prophylaxis of postoperative nausea and vomiting (PONV), all patients received intravenous dexamethasone 4 mg after induction and metoclopramide 30 mg at the end of surgery. Intravenous morphine hydrochloride was administered on demand as “rescue analgesia” for both groups.

Study endpoints were pain intensity at rest and during movement on a numerical rating scale (0 indicated no pain, 10 indicated extremely severe pain), morphine consumption per patient, and incidence of PONV during the first postoperative day. Pain intensity was evaluated at 6, 12, 18, and 24 hours after surgery.

Morphine consumption per patient for the first 24 hours was 15.9 ± 7.1 mg and 4.7 ± 6.2 mg in the control group and the study group, respectively (P < .001). Eight patients (57%) in the control group complained of nausea, and 3 (21%) had vomiting on the first postoperative day. Two patients (14%) from the study group developed nausea, and 1 patient (7%) experienced vomiting. There were no reported cases of local anesthetic systemic toxicity in patients (Table 1).

Discussion
The use of postoperative analgesia after kidney transplant remains challenging due to difficulties in using nonsteroidal anti-inflammatory drugs and morphine. Therefore, an implementation of regional analgesia methods to postoperative care protocols would help to provide more adequate pain control for these patients. Epidural anesthesia could be a good option as the neuroaxial nerve block method covers both visceral and somatic pain stimuli. Effective postoperative pain control has been reported with epidural6 and combined spino-epidural analgesia.7 However, epidural anesthesia can cause arterial hypotension, which is undesirable after kidney transplant, especially in the early postoperative period. Moreover, patients with end-stage renal disease may have uremic coagulopathy, which can further limit the use of epidural catheterization due to risk of epidural hematomas.8

Relatively new regional analgesia/anesthesia methods, which are performed by administering the local anesthetic solution into intermuscular or fascial spaces (planes) using ultrasonography guidance, are being used widely in current anesthesia practice and have been shown to be effective and safe methods. A supplemental transversus abdominis plane block was shown to improve postoperative pain scores and to decrease opioid consumption compared with control patients who received standard opioid therapy and acetaminophen9; however, data have also shown no difference compared with standard of care.10 Another such method is ESP block, which was first described in 2016 as an analgesia method for thoracic neuropathic pain.11 The ESP block method could successfully be used in abdominal and retroperitoneal surgery, but there are few articles published so far on ESP block. The only publication about ESP block use for analgesia after kidney transplant that we could find is a case report.12 In our study, we found success with this method in reducing opioid consumption in a group of patients who received ESP block compared with a retrospective control group of patients who received a standard analgesia regimen. Patients in the ESP block group had less nausea and vomiting, probably due to the opioid-sparing effect of this method and the more adequate pain control because of regional block.

Limitations of this study are the small number of patients and the nonrandomized study design. However, despite limitations, these study results could give some information and guidance on analgesia use in kidney transplant units since randomized controlled trials with proper design have not yet been done. 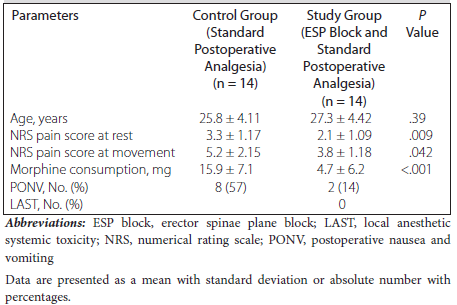 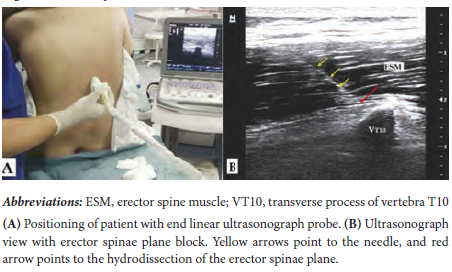