Introduction
Kidney transplantation is currently the best option for children with end-stage renal disease (ESRD). Updates in surgery and modern immunosuppression have led to excellent results, with excellent results also shown in children who are seen at pediatric centers with experience in the management of all aspects of pediatric kidney transplant (PKT). However, these therapeutic options are not accessible to all children in the world because of political, religious, economic, and cultural issues in developing countries. Most developing countries lack national kidney foundations and insurance systems, and, although renal transplant is more cost-effective than dialysis, some governmental strategies are still not in favor of promoting transplantation.

In contrast to the increasing availability of information pertaining to PKT from large-scale observational and interventional studies, epidemiological information on PKT from Arab countries and from other developing countries is currently limited, imprecise, and flawed by methodological differences between the various data sources.1-5

Materials and Methods
The Arab population comprises a population of around 350 million; 35% of this population is less than 15 years of age according to the World Health Organization (WHO) 2010 report, which has estimated the Arab pediatric population to be around 122 million. About one-fourth of Arabs live in Egypt, 60% live in Africa, and the remainder live in Asia.

Discussion
The rate of kidney transplant activity varies between and within countries; for instance, Sudan, Algeria, and Morocco, where one-third of Arabs live, together performed only about 7.3% of the total kidney transplants among Arab countries (240 of 3309 cases) and about 13.8% of all pediatric cases (41 of 298 cases).

The average PKT rate of 9.0% of total kidney transplants in Arab countries seems to be acceptable and exceeds the European rate shown in 2005, where the average pediatric transplant rate ranged from 4% to 5% of the combined adult and pediatric activity, as reported by Cochat and colleagues in a collaborative survey on pediatric renal allograft allocation practices.8 This could be attributed to several factors. First, according to a 2010 report from the WHO, 35% of the population in the Middle East are less than 15 years old, compared with 18% in Europe. Thus, one could expect that the PKT share in the Middle East countries to be at least twice that of Europe. Moreover, the presumed higher incidence of certain inherited kidney diseases in Arab countries due to the prevalence of consanguineous marriages, the lack of facilities and expertise for early detection, and/or inadequate management options for pediatric patients with kidney diseases in most parts of this region may suggest that Arab children have a higher incidence of ESRD and thus there is a higher need for kidney transplant procedures in Arab children versus European children.

The survey results showed that the 3 most active Arab countries in terms of total kidney transplants PMP per year were Jordan (29.2 cases PMP), Kuwait (20 cases PMP), and KSA (19.3 cases PMP). Together, the average PKT share of total transplants performed in these 3 countries was 8.6% (66/765), which was even lower than that drawn from all Arab countries together (9.0%), although their average kidney transplant PMP was 21.2 cases PMP, which is higher than that of all Arab countries together (9.5 cases PMP). These results indicate that the PKT share was not better even in the countries where the overall kidney transplant rate was higher. However, it is worthwhile to mention that the incidence of pediatric ESRD may differ among Arab countries, especially in countries with a high expatriate population like KSA, Kuwait, and the United Arab Emirates (UAE), not only because expatriates are generally of different ethnicity but, more importantly, because most expatriates are adults. In Kuwait, for example, two-thirds of the population are expatriates, and this can at least partially explain the smaller number of PKTs in some of these countries such as Kuwait compared with Syria, for example, and not necessarily because Kuwaiti children are neglected.

Over a single-year period, Egypt, with a population accounting for 24.3% of the Arab world (85 of 350 million), performed 42.3% of the total PKTs in the Arab world (126/298 cases). Four countries (Algeria, Egypt, Saudi Arabia, and Syria) performed 75.5% of the total PKTs in the Arab world (225/298 cases), although their population accounts for 48.6% (170 of 350 million), indicating large differences in rate of PKT PMP per year among Arab countries. Jordan seemed to be the most active country with 3.1 PKT PMP per year, followed by KSA with 1.6 and Egypt with 1.5; however, some of the transplants performed in Jordan may have been for non-Jordanian children and for children coming from Yemen and other Arab countries to receive procedures in private hospitals and then leaving the country. These PKT rates may not actually reflect the real status of PKT rates versus those shown in other countries, especially with regard to Jordan and Egypt, which are known to perform transplants for foreigners.

Morocco chose to refer selected patients to developed countries for transplant procedures and therefore was the least active, with only 2 children receiving transplants from a total of 18 kidney transplants in 2011; with a population of 32 million, the PKT PMP rate thus is extremely low and less than 0.1 cases (Figure 1). Yemen is the only Arab country where there are no PKTs, although some improvement was shown after the recently launched kidney transplant program at the Al Thaoura Hospital in Sana’a. In 2010, 33 adult kidney transplants were performed for a population of 24 million. Some of the “fortunate” Yemeni children with ESRD are being transplanted abroad, especially in neighboring Arab countries.

The rate of 0.87 PKT PMP per year in the Arab countries is quite low compared with rates shown among many developed countries. Spain/Catalonia has the highest pediatric transplant rate among Western countries, reaching 15 patients PMP, followed by a rate of 12 patients PMP in the United States and Finland (Figure 2).9

In the United States, approximately 1200 children (that is, those from 0 to 19 years old) develop ESRD each year.10 This represents approximately 16 cases per 1 million children. In the Arab world, with a population of 122 million children, nearly 2000 children are expected to develop ESRD each year if we assume Arab children have an incidence of pediatric ESRD similar to US children. From this assumption, we could therefore also suggest that only about 15% (298/2000) of the need for PKT in Arab countries is being met. Hence, although data from the Arab world on the estimated prevalence and incidence of pediatric ESRD and the estimated number of children in need for kidneys are still unclear, the actual rate of PKT being currently performed is clearly lower than what it is supposed to be in all Arab countries, including the most active countries such as Jordan and KSA. These concerns also apply to adult kidney transplantation.

In general, organ transplant is an expensive procedure and can be regarded as a public health challenge. The use of living donors is by far the most used source for kidneys in Arab countries (93.5%) for several reasons, mainly because it is less expensive than the development of a national network for organ allocation based on deceased donors. The cost of transplant is of special importance in certain countries, including Arab countries, where access to transplant often depends on familial recourses due to the absence of a national health care system versus private insurance. The need to exclusively rely on living donors has led some Arab countries (for example, Egypt, Syria) to legalize unrelated kidney donation, which rapidly led to this becoming the main source of transplanted kidneys. More critically, the practice of kidney donation from unrelated donors fell into commercialism (that is, purchase of “donated” organs), even though kidney selling is prohibited by law in these countries.11

The problem of insufficient access to kidney transplant for Arab children with ESRD is even wider than in adults. The most important causes preventing the development and/or enhancement of PKT programs in Arab countries probably are age at ESRD (treatment withdrawal may be applied for infants and young children), type of primary disease when identified (inherited inborn error of metabolism), transplant procedure (need for a combined liver and kidney transplant), associated morbidities (mental retardation), lack of facilities and expertise, and sometimes even cultural reasons that may weaken interest in providing the best care for children with ESRD.12,13 The rate of PKT PMP shown in some Arab countries such as Kuwait, Lebanon, and Iraq does not seem to follow rates shown for adult kidney transplant; however, these finding must be interpreted with caution, especially in countries with a large adult expatriate population. Nevertheless, further investigations in each country are needed. With these disparities between adult kidney transplant and PKT rates in most Arab countries, there is concern of possible “discriminatory” practices against children as being a cause behind this unacceptably low PKT rate. Having said this, pediatric nephrologists in developing countries should make a strong plea for the elimination of discriminatory practices against children12 and should continue to claim “the same rights for subjects who were living in the same country but with only a difference of age and size.”13

The results reported here are only over a single year, which may not reflect average activity over several years. In Kuwait, for example, the single-year rate for deceased donor transplants of 14% was low compared with the average taken from several years (30%), suggesting that analysis and averaging of data over several years may be better.

The upper age limit for pediatric renal care differs among countries, ranging from 13 years in Oman to 18 years in Sudan and Libya. This difference is a limitation in this study and could result in variations in results. However, one can conclude that, with renal transplant as the most favored ESRD treatment modality in children, the lack of health care resources and the lack of deceased donor transplant programs in most Arab countries have limited the provision of renal transplant in children. Some countries have inactive PKT programs and are not responding to the increasing demand for kidneys. Cooperation is needed among developing and developed countries/centers to provide assistance to developing Arab countries.

From the Farah Association for Children with Kidney Disease, Damascus, Syria
Acknowledgements: The author has not received any funding or grants in support of the presented research or for the preparation of this work and has no declarations of potential conflicts of interest.
Corresponding author: Bassam Saeed, Farah Association, PO Box 8292, Damascus, Syria
E-mail: bmsaeed2000@yahoo.com 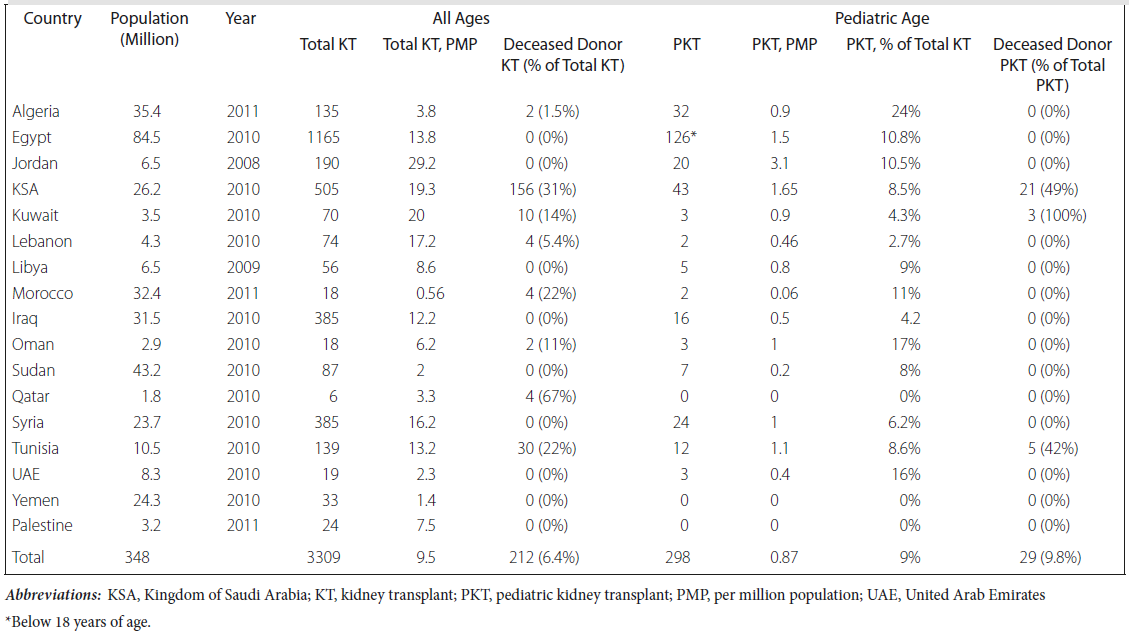 Table 1. Number of Pediatric Versus Total Kidney Transplants Performed Inside Arab Countries Over 1 Year (2008 to 2011)6,7,13 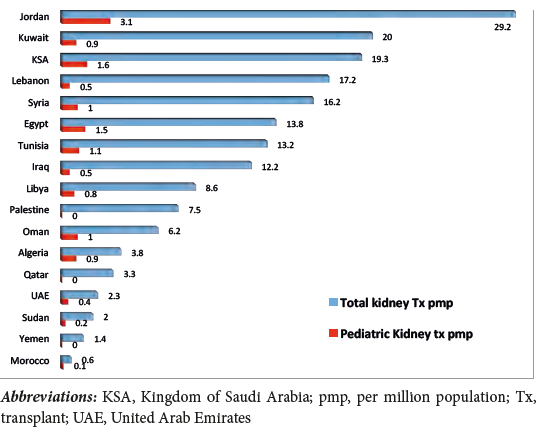 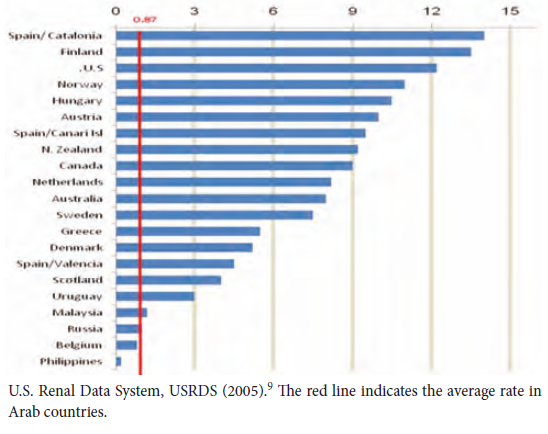 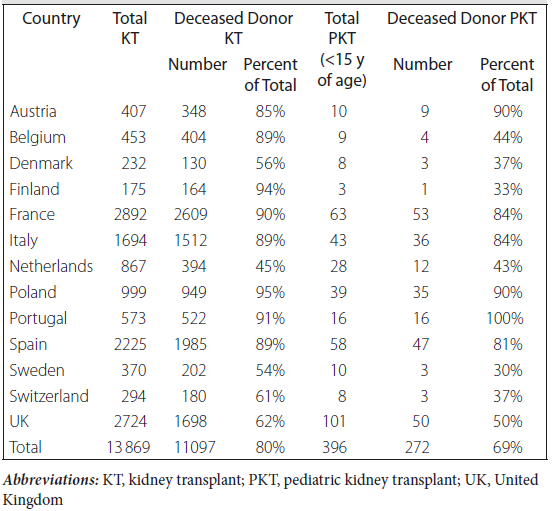