The population of Syria stood at ~23.8 million inhabitants in 2011; the current population of Syria is 17.5 million based on the latest United Nations estimates in 2020. The country has a long-standing transplant history with 8 transplant centers in the 3 largest cities. The first living donor kidney transplant in Syria was performed 42 years ago (in 1979), and 5621 renal transplants have been performed by 2020. Three cases of heart transplant from deceased donors were performed at Tishreen Military Hospital in Damascus over a short period of time (from mid-1989 to the end of 1990); however, cardiac transplant activities have since discontinued. Recently, 2 liver transplants from living related donors have been performed at the Al-Assad University Hospital in Damascus. Currently, kidney, bone marrow, and cornea are performed in Syria.1

In 2006, the estimated incidence of end-stage renal disease in Syria was 100 per million population (pmp).2 The prevalence of patients with end-stage renal disease undergoing dialysis was 217 pmp in 2009.3Peritoneal dialysis has not been embraced in the country thus far; in 2005, <4% of patients on dialysis were receiving continuous ambulatory peritoneal dialysis.4Presently, kidney transplant activities are solely focusing on living donor procedures. However, with the increasing demand for renal transplant, a new national Syrian legislation, known as Law Number 30, has been enacted, authorizing the utilization of organs from living unrelated donors and from deceased donors. To prevent transplant tourism, a national guidance on organ transplantation has been instituted demanding that organ donation be based on motivations only involving solely Syrian nationals. This legislation has been considered a landmark in the history of organ transplantation in Syria as it recognizes, for the first time, the concept of brain death and the authorization of retrieving organs from deceased donors as well as from living nonrelated donors under specific conditions.4

In 2009, Professor Francis Delmonico, former president of the Transplantation Society, visited Damascus and met with the Syrian Minister of Health. In a round table discussion, which included the Minister of Health, Professor Delmonico, representatives from the WHO/Eastern Mediterranean office, and key Syrian and Middle East transplant professionals, next steps for the implementation of the Declaration of Istanbul were discussed. This meeting also concluded to initiate a deceased donor program in Syria, to form a National Transplant Committee, and to scrutinize unrelated transplantation. Subsequently, the Ministry of Health issued an additional law, which established the Syrian National Center for Organ Transplantation, representing, at least in theory, an important step forward with logistical, organizational, and financial support by the government.

Despite these steps, the Syrian National Center has unfortunately remained inactive to this day. For a variety of reasons, the center has not performed any of the tasks assigned, including coordinating efforts between transplant centers and health authority to help with establishing the long-awaited national deceased donation program. Consequently, the practice of deceased donor transplants remains inactive in Syria, with the Center’s role to help initiate, supervise, and coordinate activities between donor hospitals and transplant centers also being inactive. Additional roles of the Syrian National Center, a nonprofit governmental agency, included, at least on paper, applying strategies to increase the awareness of the medical community and public at large for ethical organ donation.

Consequences of the Ongoing War in Syria on Organ Transplantation
Since the start of the conflict in March 2011, Syrians have suffered under the consequences of war-related violence, threats to health, and lack of access to health services, including organ transplantation. Many of the country’s health facilities, including clinics and public transplant centers, have been demolished or have discontinued their operations. The Syrian conflict has affected all aspects of organ transplantation, paralyzed new projects, and negatively affected existing programs.2 The deteriorating humanitarian situation has involved health workers and facilities. Before the war in 2010, 385 kidney transplants had been performed in the country, declining to 154 in 2013 (60% less)1but increasing to 275 transplants in 2019, which is still 28% less than the number of transplants performed before the war. The number again decreased to 214 kidney transplant because of the COVID-19 pandemic (Figure 1). Since 2010, the number of operational kidney transplant centers has decreased from 8, distributed over 3 cities, to only 4 centers in 2013, all located in Damascus1; as of 2021, there are 6 active kidney transplant centers in Damascus. Interestingly, the relative contribution of unrelated kidney donors has decreased by 20% for unclear reasons. Moreover, 10 years after the war started, >50% of kidney transplant physicians and surgeons are no longer practicing transplant medicine in their centers, either because they have left the country or because their center has discontinued to be operational.1 Since the war, availability and timely provision of immunosuppressants have been a main challenge for health authorities and transplant patients in all Syrian provinces. This challenge has led to adverse medical consequences. Moreover, nonrenal transplant programs, including an initiative for liver transplants, came to a halt mainly because foreign trainers could not visit Syria.1 The autologous bone marrow transplant program had slowed until recently; however, it has recently become more active, involving both autologous and allogeneic transplants. The commitment of transplant teams despite these huge challenges continues to be unique and extraordinary.

Hurdles Toward Initiating a Deceased Organ Donation Program in Syria
Initiating a deceased organ donation program is widely considered as an essential component of a comprehensive approach to respond to the ever-increasing organ shortages in Syria and worldwide. Unfortunately, 18 years after the law authorizing deceased donors, a program is still not in place in Syria and additional improvements of the legal framework remain needed. The years that preceded the current war in Syria were marked by an absence of growth of kidney transplant activity, a delay in establishing a deceased donor program, and an exclusive reliance on living donors. Limited resources and small numbers of organized teams of transplant surgeons and nephrologists and lack of public awareness, education, and motivation for organ donation continue. Ironically, the existence of “renal commerce” delayed the start of the deceased donor program, as paid renal donation masked the need and urge to start a national deceased donor program at the expense of tarnishing the reputation of transplantation among ordinary people. Ignorance appears to be a major limiting factor inhibiting the initiation of a deceased donor program in Syria as in many other developing countries.7 A concerted and ongoing education campaign, aimed at changing negative public attitudes and gaining societal acceptance, is needed for the transplant community and the public to increase awareness of organ donation. The indifferent attitude of health care professionals has also been identified as a major limiting factor to the initiation of a deceased donor program, a fact that has also been pointed out in other developing countries.7,8 The unfortunate war continues to add substantially to the many reasons that prevented the start of a deceased donor program before the conflict.

More than 4 decades after the first successful kidney transplant procedure in Syria, patients in need of organ transplant still only rely on living donors. The recommendations of the Istanbul Declaration are yet to be implemented in Syria. Thus, every effort must be made to initiate a deceased donor program to lessen the burden of living donors and to enable a national self-sufficiency, not only in kidney but also for the transplantation of nonrenal organs.

From the Farah Association for Children with Kidney Disease, Damascus, Syria
Acknowledgements: The author has not received any funding or grants in support of the presented research or for the preparation of this work and has no declarations of potential conflicts of interest.
Corresponding author: Bassam Saeed, Farah Association, PO Box 8292, Damascus, Syria
E-mail: bmsaeed2000@yahoo.com 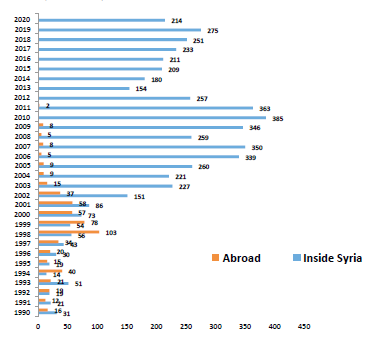 Figure 1. Kidney Transplant Activities in Syria and Transplants on Syrians Traveling Abroad (1990 to 2018)