Hepatocellular carcinoma (HCC) is the most common primary hepatic malignancy and the fourth leading cause of cancer-related deaths in the world.1,2 Because of lack of symptoms in the early stages of the disease, HCC is frequently diagnosed at late stages, with a median survival time of 6 to 20 months and a 5-year survival rate of less than 12%.3

Surgery, either a partial hepatectomy or liver transplant, remains the gold standard for curative treatment for HCC.3-5 Liver transplant, which can be offered to patients with unresectable HCC regardless of the patient’s liver function, is associated with a 4-year posttransplant survival rate of 85% and recurrence-free survival rate of 92%.6,7 However, approximately 20% to 30% of patients still have substantial disease progression while awaiting transplant.8,9 Therefore, a bridge therapy is an important option for patients awaiting transplant due to the scarcity of donors and the great number of nonmalignant indications of liver transplant. Bridge therapies are typically used to prevent drop out of patients from wait lists and to allow downstaging of tumors so that patients with advanced HCC can be candidates for transplant. Various locoregional treatment strategies serve as bridging treatment, including transarterial chemoembolization (TACE), radiofrequency ablation (RFA), and radioembolization with yttrium-90 microspheres.8

Historically, radiation therapy has had a limited role in the management of HCC because radiation tolerance of the whole liver is far lower than the therapeutic effective doses required for tumor ablation.9,10 However, technological developments have allowed more conformal delivery of radiation therapy to the tumor while enormously sparing the healthy liver parenchyma. Stereotactic ablative body radiotherapy (SABR) is a technique in which a single or a limited number of high-dose radiation fractions are delivered to a small, precisely defined target. The beams converge on the target lesion, minimizing radiation exposure to the adjacent normal tissue. Stereotactic ablative body radiotherapy has been studied as a definitive local treatment option for both primary11,12 and metastatic liver tumors13; however, data on the role of SABR as a bridge to liver transplant are so far limited.8,14-18 Here, we report Başkent University’s initial experience on SABR as a bridge to liver transplant for patients with HCC.

Patient selection
This study included selected patients who were diagnosed with HCC and referred to the Liver Transplantation Center of Başkent University Hospital (Ankara, Turkey). All patients were potential candidates for local therapy before transplant. All cases were reviewed and discussed by a multidisciplinary team of expert liver transplant surgeons, radiation oncologists, interventional radiologist, and hepatobiliary system radiologists. Inclusion criteria were (1) histopathologically proven diagnosis of HCC; (2) patient Karnofsky Performance Status of ≥70; (3) lesion size of ≤6 cm in diameter or ≤3 lesions with a total diameter of ≤6 cm; (3) no extrahepatic metastases; (4) Child-Pugh class A or B; (5) tumor at least 1 cm away from stomach and intestinal mucosa or chest wall; and (6) no prior abdominal radiation therapy. We included patients with portal vein tumor thrombosis and patients who received other liver-directed therapies, including TACE, RFA, and surgery. Written informed consent was obtained from all patients. Our institutional review board approved this retrospective observational study.

Treatment planning
All patients were immobilized in supine position with arms above the head using a BodyFIX bluebag with vacuum wrap (Elekta). The use of an abdominal compression device attached to the body frame reduced liver motion caused by patient breathing. Before transplant, planning computed tomography (CT) scans were performed with 2- to 5-mm interslice reconstruction from the lung apex to lower aspect of the pelvis.

Target volumes and organs at risk were delineated, and treatment plans were calculated on the Monaco HD Treatment Planning (Elekta) platform. The gross tumor volume included macroscopic disease defined from contrast-enhanced planning CT scans. For better delineation of gross tumor volume, positron emission tomography-CT or magnetic resonance imaging were fused with contrast-enhanced CT. No expansion margin was added to the corresponding clinical target volume. For planning target volume (PTV), a minimum of 7 to 10 mm was added to the craniocaudal margin and 5 to 7 mm was added to the other margins. Organs at risk outlined and used during the optimization process were spinal cord, stomach, small and large bowel, duodenum, both kidneys, and whole liver (Figure 1). Dose constraints are summarized in Table 1.

Treatment with stereotactic ablative body radiotherapy
Treatment was delivered every other day. The dose was prescribed to be 90% isodose line, and the PTV coverage was set to be greater than 95% of the prescribed dose. The Monaco Treatment Planning system was used to calculate the plans, which used the Monte Carlo algorithm and a sliding window multileaf collimator delivery technique. All treatment plans were carried out in preparation for delivery with a VERSA-HD linear accelerator (Elekta). Volumetric modulated arc therapy plans included 2 or 3 arcs of 360 degrees. To overcome setup inaccuracies, all patients were treated with image-guided radiation therapy using daily cone-beam CT. Patient setup was realized using cone-beam CT with online couch adjustment using the HexaPOD evo radiation system (Elekta), which is guided by an infrared camera that enables submillimeter patient positioning accuracy in 6 degrees of freedom to correct translational errors (x, y, z) and rotational errors (roll, pitch, yaw). Instead of implantation of fiducial markers, 3-dimensional positions of the whole liver, bones, main blood vessels, and diaphragm were used as surrogates for tumor position. After automatic matching of cone-beam CT images to reference CT images, couch repositioning was performed, and manual refining was performed by the treating physician.

Response and toxicity evaluation
All patients were assessed during the entire course of SABR and at 1 month after the completion of SABR, with assessments continued at 3- to 4-month intervals for the first 2 years after SABR. Clinical evaluation, complete blood count, liver function, Child-Pugh score, toxicity, and imaging with contrast-enhanced dynamic magnetic resonance imaging were performed. Radiographic response to stereotactic body radiation therapy was assessed according to the modified Radiographic Evaluation Criteria in Solid Tumors criteria.19In-field failure was defined as disease progression or new enhancement within the PTV or at its margins. Toxicity outcomes were recorded during treatment and at each follow-up using the Common Terminology Criteria for Adverse Events version 4.03.

Stereotactic ablative body radiotherapy response
Magnetic resonance imaging was used to assess response rates 1 month after SABR. Table 3 displays the SABR response rates of all relevant patients. Complete radiologic response was observed in 5 (55.6%) of the 9 SABR courses, partial response in 2 (22.2%), and stable disease in 2 (22.2%). The overall response rate was 77.8%, and in-field tumor control rate was 100%. After application of SABR, there was no progression of disease.

Toxicity
Stereotactic ablative body radiotherapy response was well tolerated by all patients, and all courses were fully completed. Fatigue was the most common acute side effect. We found no evidence of acute gastrointestinal toxicity. Radiation-induced liver disease (RILD) was assessed using liver enzyme, bilirubin, and albumin levels; no significant differences were observed with these results after SABR completion and 1 month later.

Discussion
Several liver-directed therapies have been used as a bridge to transplant in HCC patients. Each has some limitations in terms of the patient’s overall health; the location, number, and size of the lesions; and underlying liver function. As a result, a novel treatment strategy is required to reduce the dropout rate from transplant wait lists by controlling local recurrences during the waiting period. Stereotactic ablative body radiotherapy response is a highly conformal radiation therapy technique that allows higher radiation doses to be delivered to the tumor while sparing nearby healthy tissue. A small number of studies have been conducted to assess the role of SABR as a bridge to transplant in HCC, with most yielding promising results. In the present study, we reported our preliminary results as well as the safety and efficacy of SABR as another treatment option for bridging therapy. Our findings showed that SABR resulted in 100% tumor control while not worsening the underlying liver disease in patients.

Stereotactic ablative body radiotherapy response is an effective, noninvasive treatment compared with other local therapies for management of HCC. For instance, RFA has limited efficacy if the tumor is adjacent to a large vessel, and TACE is contraindicated if there is portal vein thrombosis.8 In addition to these limitations, invasive techniques have some morbid adverse effects, including bleeding, infection, ileus, transient elevations of aspartate aminotransferase and alanine aminotransferase and bilirubin values, and pain.8Stereotactic ablative body radiotherapy response has been shown to achieve 2-year local control rate of 74% to 100% and overall survival rate of 34% to 68.7%, compatible with other liver-directed therapies.8,14-23Moreover, SABR has been generally well-tolerated, with severe toxicity rates of generally less than 10% in patients with Child-Turcotte-Pugh class A disease.24-26

As shown in Table 4, SABR can provide excellent in-field tumor control rates at doses of 30 to 54 Gy in 3 to 6 fractions. Furthermore, SABR has been shown to achieve complete responses in 27% to 61.5% of treated lesions, resulting in improved overall and disease-free survival rates after transplant.8,14,21-23In a retrospective study that described the clinical outcomes and pathological evaluations of SABR in patients with advanced HCC, Wang and colleagues14 described 14 patients with 25 total HCC lesions with a median diameter of 4.45 cm. Treatment with SABR resulted in 100% field tumor control and 62.5% response rate. Four of the 14 patients (28.5%) had portal vein tumor thrombosis, and the authors accounted for it in the SABR target volume. In our present study, treatment with SABR also resulted in 100% field control and a response rate of 77.8%. Other studies have also reported 100% field tumor control.8,15,17,20-22

Because of concerns about radiation-induced liver toxicity, the role of radiation therapy in the management of HCC, particularly for bridging therapy, remains limited. Over the past 2 decades, a better understanding of the dose-volume effects of partial-liver radiation has allowed radiation oncologists to use normal tissue complication probability models to predict the risk of RILD associated with a given treatment plan.27,28As shown in Table 4, SABR has been well-tolerated when used as a bridge to transplant in patients with HCC. The maximum detected toxicity in the study from Wang and colleagues14 was 1 case of grade 3 thrombocytopenia and 2 cases of grade 3 to 4 hyperbilirubinemia. These side effects were attributed to potential causes, such as underlying cirrhosis, low normal liver volume, and the second course of irradiation. Furthermore, Child-Pugh class C patients were included in the study from Wang and colleagues. In the study by Wang and colleagues, 1 patient (6.3%) had RILD. According to Katz and colleagues,8 the most common side effect was fatigue, and no patients developed grade 3 toxicity or RILD. Guarneri and colleagues20 reported 8 patients with a total of 13 lesions who had SABR before transplant. One patient in the study by Guarneri and colleagues developed RILD at 1 month after treatment. Andolino and colleagues23 described the treatment of 60 patients with liver-confined HCC with SABR. Twenty-one patients in their study experienced grade 3 hematologic/hepatic toxicity. However, 17 of 21 patients with documented grade 3 hematologic/hepatic toxicity had previously experienced grade 2 dysfunction in that category. Eight patients had a 1-grade increase in hematologic/hepatic dysfunction. One patient developed grade 4 thrombocytopenia and hyperbilirubinemia despite having been previously diagnosed with grade 3 thrombocytopenia and grade 1 hyperbilirubinemia. We did not find any grade 3 toxicities or RILD in our study. We observed grade 1 thrombocytopenia in 2 patients; however, both of these 2 patients had low platelet counts at the start of SABR.

There are some limitations to our study that should be mentioned. First, these results were preliminary findings and additional time would be needed to explain our final findings. Furthermore, our number of patients was small; however, our study is ongoing, and we have been treating new patients. However, data on the value of SABR as a bridge to HCC are still limited, and Başkent University’s experience contributes to the expansion of knowledge on this noninvasive, well-tolerated approach.

In conclusion, SABR is an effective, safe, and tolerable bridging treatment option before liver transplant. Although our patients showed an early response to SABR, the exact response rates will not be known for at least 3 months after SABR. As a result, our findings should be confirmed in future prospective studies with longer-term follow-up. 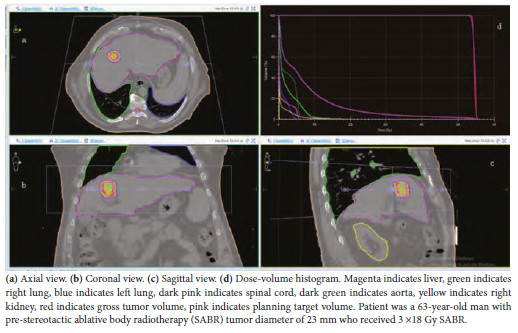 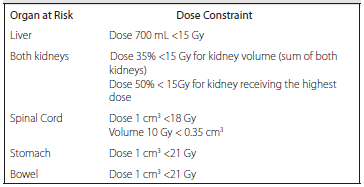 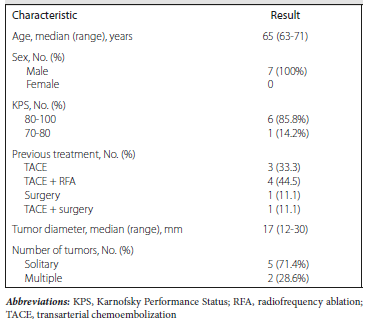 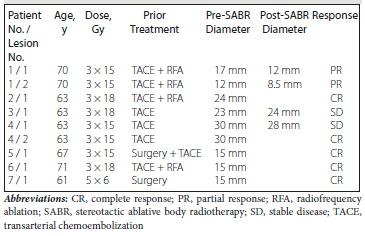 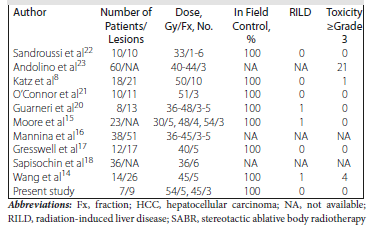 Table 4. Summary of Literature on Stereotactic Ablative Body Radiotherapy as a Bridge to Transplant in Patients With Hepatocellular Carcinoma 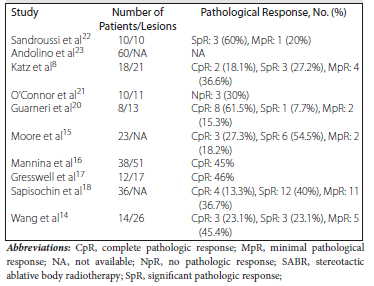