Objectives: In this study, we examined the graft and patient survival outcomes in patients with end-stage kidney disease who received 6 HLA-mismatched incompatible living donor kidney transplant.
Materials and Methods: Patients who underwent living donor kidney transplant between January 2010 and March 2020 were evaluated retrospectively. Group A included kidney transplant recipients with 6 HLA mismatches, and group B included kidney transplant recipients with 0 to 5 HLA mismatches. Patients with <1 year of follow-up were excluded. All rejection episodes were diagnosed via Tru-Cut biopsy and histopathological evaluation.
Results: There were 15 patients in group A and 176 patients in group B. The mean follow-up was 54.1 ± 30 months. The number of patients who underwent pretransplant immune desensitization and received tacrolimus-based triple maintenance immunosuppression therapy was significantly higher in group A. In group A, there were 13 acute rejections seen in 9 patients (81%); in group B, there were 67 acute rejections seen in 51 patients (28.9%; P = .019). No differences were observed between the groups in terms of baseline glomerular filtration rate (60 ± 16 vs 61.6 ± 20 mL/min/1.72 m2; P = .76), final control glomerular filtration rate (60.7 ± 15 vs 58 ± 19 mL/min/1.72 m2; P = .59), graft loss (0% vs 4%; P = .94), and mortality (6.6% vs 3%; P = .39).
Conclusions: The presence of 6 HLA mismatches was associated with higher rates of biopsy-proven acute rejection. However, 6 HLA-mismatched incompatible living donor kidney transplant can be safely performed in centers where posttransplant follow-up is supported by indication and protocol biopsies and where there is a pathological infrastructure with extensive knowledge and experience.

Human leukocyte antigen (HLA) matching between donor and recipient is the most important component of the organ allocation process in kidney transplant. The degree of HLA incompatibility in kidney transplant is closely related with increased risk of acute rejection and decreased allograft and patient survival.1-4

The implementation of potential immunosuppressive treatment protocols in recent years has decreased the negative impact of HLA incompatibility on graft survival.5,6 However, some studies still highlight the importance of HLA matching for successful transplant outcomes.7

Because deceased donor organ donations cannot resolve the imbalance between supply and demand in kidney transplant, the number of living donor transplants has been increasing all over the world.

In this study, we aimed to examine the graft and patient survival outcomes in patients with end-stage kidney disease who underwent incompatible living donor kidney transplant (LDKT) with 6 HLA mismatches.

Data on patients who underwent LDKT between January 2010 and March 2020 at our single center (Izmir Bozyaka Education and Research Hospital, Izmir, Turkey) were retrieved from medical records. Patients were categorized into 2 groups: group A included LDKT recipients with 6 HLA mismatches and group B included LDKT recipients with 0 to 5 HLA mismatches. Patients with less than 1 year of follow-up were excluded from the study. A positive complement-dependent cytotoxicity crosmatch was considered a contraindication to kidney transplant. In all patients, the diagnosis of acute rejection was solely based on the histopathological findings in the indication and protocol biopsies.

Statistical analyses
All analyses were performed with SPSS for Windows statistical package (version 15.0; IBM). The mean and SD of all values were calculated. P < .05 was considered to be statistically significant. For normally distributed data, we compared means by t tests; when data were not normally distributed, we used the Mann-Whitney U test. Fisher exact tests were used for comparison of proportions.

Results
There were 15 patients in group A and 176 patients in Group B. The mean follow-up was 54.1 ± 30 months, and the mean age of study patients was 54 ± 30 years. Of the total group, 64% were men. Table 1 compares the demographic, clinical, and immunological characteristics between the 2 groups.

An implantation biopsy was performed in 13 recipients in group A and 152 recipients in group B within the first hour after completion of vascular anastomoses and reperfusion of the allograft, with all samples sent for histopathological examination. These results are shown in Table 2. Donor-derived vascular pathology (ah1 + cv1) was significantly more common in allografts of group A patients (23.1% vs 4.6%; P = .03).

Table 3 shows the number of acute and chronic biopsy-proven rejections after transplant in both groups. In group A, there were 13 acute rejections seen in 9 patients (81%). Of these, 10 (76%) were acute cellular rejections (ACR) and 3 (23%) were mixed-type rejections. Chronic rejection did not develop in any of the patients in group A. Of the ACRs, 5 were borderline, 1 were type 1A, 2 were type 1B, and 2 were type 2. Rejection was observed in 8 patients (53%) in the first 2 weeks after transplant.

In group B, there were 67 rejections seen in 51 patients (28.9%). Of the acute rejections, 42 (62%) were ACRs, 9 (13.4%) were acute antibody-mediated rejections, and 11 (16%) were mixed-type rejections. Chronic rejection was observed in 5 patients in group B. Of these, 4 were chronic mixed-type, which were diagnosed 40 months posttransplant; the other patient had chronic acute antibody-mediated rejection, which was diagnosed 5 years posttransplant.

When rejection results were compared between groups, the rate of rejection in group A was significantly higher than in group B (81% vs 28.9%; P = .019). With respect to rejection subgroups, ACR was observed at a significantly higher rate in group A (76% vs 62%; P = .001). Chronic allograft damage indices were calculated in the most recent indication or protocol biopsies of the patients in both groups. Accordingly, the chronic allograft damage index scores of group A and group B were 3.6 ± 3.2 and 3.03 ± 2.4 (P = .39), respectively.

Discussion
In this study, we presented the outcomes of recipients who received 6 HLA-mismatched LDKT compared with recipients who received 0 to 5 HLA-mismatched LDKT. The recipients of 6 HLA-mismatched allografts had higher rates of biopsy-proven acute rejection episodes (81% vs 28.9%; P = .019), particularly in the first month posttransplant. The subgroup analysis of these early rejections revealed the predominance of ACR. With appropriate treatment, none of these rejections proceeded to chronic T-cell mediated rejection. On the other hand, the baseline GFR value, final control GFR, rate of graft loss, and mortality rates were similar between the groups.

Studies before 2000 showed that an increase in the number of HLA mismatches in patients with deceased donor kidney transplant resulted in a high incidence of rejection and poor graft survival.1-3 The number of HLA mismatches has an adverse effect on renal allograft survival, with 1 mismatch resulting in a 17% higher risk of graft failure. The risk of graft failure increases almost twice in patients who have undergone 6 HLA-mismatched incompatible kidney transplant.8 In their study, Su and colleagues used big data from the United Network of Organ Sharing to show that the significance of HLA matching had diminished over time, whereas the estimated effects of other nonimmunologic risk factors remained relatively stable.5 Similarly, in a study from Spain, HLA mismatches did not influence kidney graft survival in 2600 deceased donor kidney transplants.6 In contrast, Opelz and colleagues analyzed 135 970 deceased donor kidney transplant recipients and showed that HLA mismatches continued to significantly affect graft outcomes and that the immunosuppressive regimen failed to counteract the effects of HLA mismatches on rejection for 2 consecutive decades (1985 to 1994 vs 1995 to 2004).7 This result is substantiated in patients with LDKT, and Rizarri and colleagues reported that transplants from 5 or 6 HLA-mismatched living donors had significantly worse graft survival than transplants with 1 or 2 HLA mismatches.4

In contrast to previously mentioned studies, some authors have suggested that the excellent posttransplant outcomes obtained for 5 or 6 HLA-mismatched LDKT were probably because of the administration of potent immunosuppressive agents.9 In our study, we observed no statistical difference in parameters such as kidney function, viral infection incidence, and graft and patient survival between the 2 groups during the mean follow-up of 54 months. We believe that induction therapy with antithymocyte globulin and triple immunosuppressive maintenance therapy based on tacrolimus and modern antiproliferative drugs contributed to these successful outcomes in both groups.

However, despite current strong immunosuppressive drugs, early acute rejection, which was observed at a high rate in 6 HLA-mismatched incompatible LDKT, remains an important problem. In a recent study about protocol biopsies performed at 3 months posttransplant, subclinical inflammation was found to be significantly higher in recipients of 6 HLA-mismatched allografts than in patients who received allografts with 5 or less HLA antigen mismatch score.10 Therefore, we should be vigilant for such problems that have negative effects on allograft outcomes and follow-up on early-stage graft dysfunctions with biopsy.

In this study, the presence of 6 HLA mismatches was associated with higher rates of biopsy-proven acute rejection. However, 6 HLA-mismatched incompatible LDKT can be safely performed in centers where posttransplant follow-up is supported by indication and protocol biopsies and where there is a pathological infrastructure with extensive knowledge and experience. 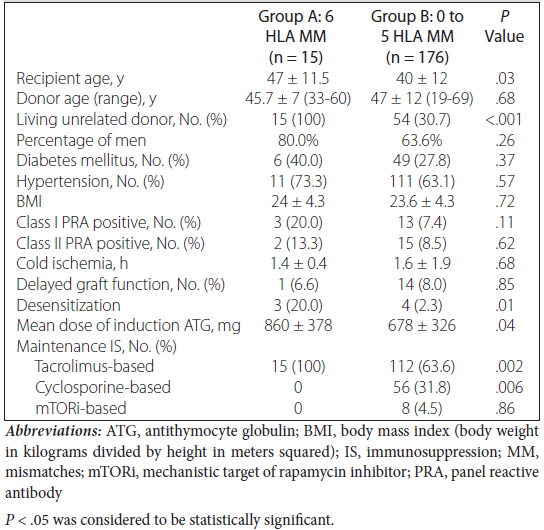 Table 1. Demographic, Clinical, and Immunological Characteristics of Group A and Group B 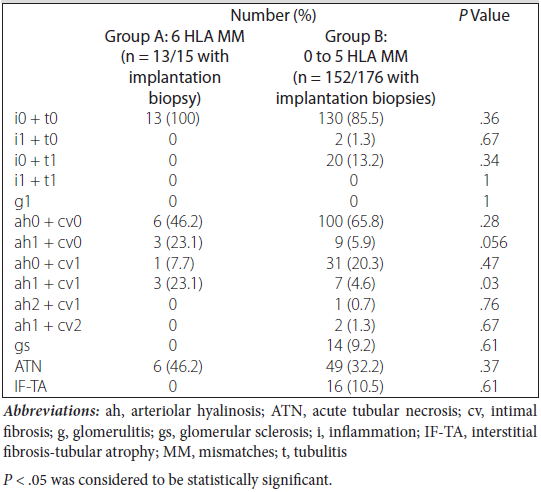 Table 2. Histopathological Examination of Implantation Biopsies of Allografts in Both Groups 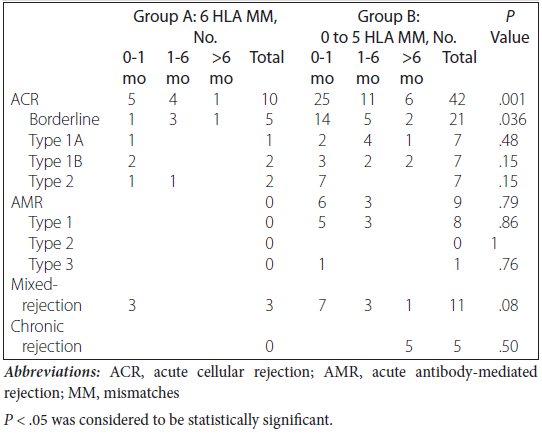 Table 3. Incidence and Type of Rejections 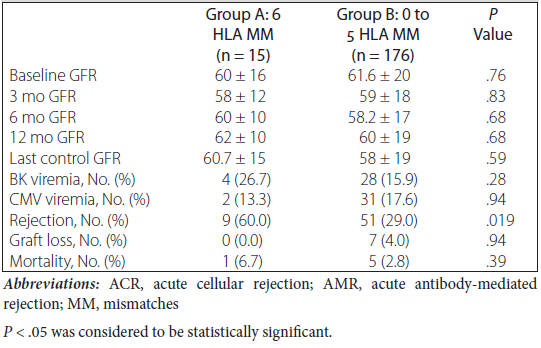