Objectives: We investigated patients with genitourinary cancer after kidney transplant and the effects of immunosuppression reduction and switching to mechanistic target of rapamycin inhibitors.
Materials and Methods: We retrospectively evaluated kidney transplant recipients seen at our center between January 2000 and January 2020. Patients with <1 year of follow-up were excluded.
Results: Of 827 patients, genitourinary cancer was detected in 11 (1.3%): prostate cancer in 5 patients (45%), renal cell carcinoma in native kidney in 3 (27%), renal cell carcinoma in allograft kidney in 2 (18%), and transitional cell carcinoma of the bladder in 1 (9%). All patients had surgery. Two patients had bone metastasis due to prostate cancer at diagnosis. Two patients had allograft nephrectomy due to de novo renal cell carcinoma. Mean follow-up and age were 97 ± 45 months (range, 26-189) and 50 ± 10.2 years (19% female). After cancer diagnosis, excluding the 2 patients with allograft nephrectomy, immunosuppression was changed in 8 patients (88.8%) (1 patient received the same treatment before and after cancer diagnosis). Six patients received double-drug and 3 received triple-drug protocols. Of 9 patients, 2 were already using mechanistic target of rapamycin inhibitors before cancer diagnosis and 7 were switched: 4 to double-based and 3 to triple-based regimens. Six were switched from tacrolimus. With new treatments, patients showed no progressive kidney failure or rejection (38 ± 40 mo average follow-up). At last follow-up, mean glomerular filtration rate was 62.8 ± 34 mL/min/1.72 m2, which was similar to rate at cancer diagnosis (58.9 ± 24 mL/min/1.72 m2; P = .78). During follow-up, no patients developed local recurrence of primary tumor or new metastasis, and none showed adverse effects after switch to mechanistic target of rapamycin inhibitors. Three patients died of malignancy-unrelated reasons (ileus, urinary sepsis, heart failure).
Conclusions: Mechanistic target of rapamycin inhibitor-based drugs can be an important maintenance immunosuppressive treatment option for kidney transplant recipients with genitourinary cancers.

Introduction
The long-term use of immunosuppressive drugs can increase the incidence of cancers after kidney transplant, and de novo genitourinary cancer is an important comorbidity in these patients.1-3 Kidney transplant recipients (KTRs) have an incidence of kidney cancer that is 15 times that of the general population, whereas incidences of prostate and bladder cancer are 2 and 3 times higher in KTRs.3

However, there is an ongoing debate about how to adjust the immunosuppressive regimen for patients with posttransplant cancer. Although the most commonly accepted practice is dose reduction or withdrawal of immunosuppressive agents, there is concern that graft function and survival may be adversely affected.4,5 On the other hand, because of their antitumor effects, mechanistic target of rapamycin inhibitors (mTORi) have been used to reduce malignancy and related complications.6-8 An analysis of the kidney transplant registry of the United Network for Organ Sharing compared the risk for cancer associated with mTORi-containing versus non-mTORi-containing regimens and reported that patients with maintenance immunosuppression based on mTORi drugs had significantly reduced risk of developing any posttransplant de novo malignancy.9

In this study, we investigated patients who developed genitourinary cancer after kidney transplant at our center and examined the effects of immunosuppression reduction and switching to mTORi drugs on allograft outcomes.

Materials and Methods
We retrospectively evaluated medical records of 827 KTRs who were followed between January 2000 and January 2020 at the Health Sciences University, Bozyaka Organ Transplantation and Research Center (Izmir, Turkey). Patients with de novo genitourinary cancer after kidney transplant were included in this study. Patients with less than 1 year of follow-up were excluded.

At our center, acute allograft rejections are always confirmed based on biopsy findings and treated essentially with pulse methylprednisolone (0.5-1.0 g/d for 3 days) with or without rabbit antithymocyte globulin. Immunoadsorption and intravenous immunoglobulin are administered in those who had antibody-mediated acute rejection. The estimated glomerular filtration rate (eGFR), calculated using the Modification of Diet in Renal Disease, is used to measure kidney allograft function.

Statistical analyses
Statistical analyses were performed with SPSS software for Windows (version 15.0; SPSS: An IBM Company, IBM Corporation). Means and standard deviations of all values were calculated. Mean values were compared by t test or by a nonparametric test if the data were not normally distributed. P < .05 was considered statistically significant.

Of the 827 KTRs, genitourinary cancer was detected in 11 patients (1.3%); 3 patients had living donor and 8 patients had deceased donor kidney transplant. The mean age at transplant was 50 ± 10.2 years, and mean follow-up was 97 ± 45 months (range, 26-189 mo). Of these 11 KTRs, 2 (19%) were female patients. The average number of HLA mismatches was 3.4 ± 1.2. All patients had negative class I and class II panel reactive antibodies, and all had been treated with induction immunosuppression (rabbit antithymocyte globulin) therapy. Five patients (45%) had a history of delayed graft function in the perioperative phase, and mean cold ischemia time of kidney allografts was 10.2 ± 7 hours. Maintenance immunosuppressive protocol was tacrolimus in 4 patients (36%), cyclosporine in 4 patients (36%), and mTORi in 3 patients (27%). The baseline eGFR of the KTRs was 71.4 ± 24 mL/min/1.72 m2. Table 1 shows the demographic features and clinical course of the study patients.

Two patients had acute rejection episodes before the development of cancer. Biopsy findings were compatible with T-cell-mediated rejection, and the patients were treated with pulse steroid and antithymocyte globulin. Graft function improved in these 2 patients after treatment.

Genitourinary cancer developed an average of 59 ± 32 months (range, 9-122 mo) after kidney transplant, and the mean age was 55.3 ± 9 years (range, 34-67 y). Of these patients, 5 (45%) had prostate cancer, 3 (27%) had renal cell carcinoma (RCC) in the native kidney, 2 (18%) had RCC in allograft kidney, and 1 (9%) had transitional cell carcinoma of the bladder. There were no systemic metastases at whole body screening in 9 patients. Two patients had bone metastasis due to prostate cancer at diagnosis. Surgery was performed in all cases. Two patients were treated with renal allograft nephrectomy due to de novo RCC and lost their grafts at 75 and 97 months after transplant.

Two patients treated with allograft nephrectomy due to de novo RCC required regular hemodialysis after the operation. The mean follow-up of the other 9 patients was 38 ± 40 months after genitourinary cancer diagnosis. There was no progressive kidney failure or rejection among these patients during follow-up. At the last follow-up, when compared with that shown at cancer diagnosis, the mean eGFR (62.8 ± 34 vs 58.9 ± 24 mL/min/1.72 m2, P = .78) and the mean spot protein-creatinine ratio (0.58 ± 1 vs 0.8 ± 1.4; P = .7) of the patients were not significantly different. No patient had local recurrence of primary tumor or presented with newly developing metastasis during follow-up. Three patients died of malignancy-unrelated reasons (ileus, urinary sepsis, and heart failure).

Discussion
In this study, we presented the efficacy and safety of reduced immunosuppression with mTORi switch in KTRs who developed genitourinary cancer. Two patients required treatment with allograft nephrectomy due to de novo RCC and lost their graft. Among the other KTRs in our patient group, we did not detect any adverse effects on graft survival after switch from CNIs to mTORi during the average of 3 years of follow-up after cancer diagnosis. In addition, there was no local recurrence of primary tumor or newly occurring metastasis in the study patients during follow-up.

Mechanistic target of rapamycin inhibitors have antineoplastic features and show promise in reducing cancer recurrence while enabling ongoing immunosuppression. These inhibitors deactivate T and B lymphocyte proli-feration by preventing activation of mTOR, which then inhibits the progression from the G1 to the S phase of the cell cycle. In addition, mTORi agents also reduce tumor growth by inducing tumor cell apoptosis and suppressing tumor angiogenesis.10,11

In experimental studies, mTORi alone or combined with cyclosporine reduced incidence of human RCC metastasis and prolonged survival.9,12 Recent studies and registry analyses have confirmed that immunosuppression treatment protocols that include mTORi are associated with a reduced incidence of malignancy after kidney transplant.6,7 A multicenter study showed that patients who received mTORi-based treatment had lower incidence of both skin and nonskin cancers at 5 year after transplant.6 Kauffman and colleagues, who analyzed posttransplant malignancies in 33?249 KTRs, reported that rate of patients with any de novo posttransplant malignancy was 0.60% with sirolimus/everolimus alone, 0.60% with sirolimus/everolimus + cyclosporine/tacrolimus, and 1.81% with cyclosporine/tacrolimus (P < .0001); the rates in patients with de novo solid tumors were 0%, 0.47%, and 1.00%, respectively.7

There has also been concern that dose reduction or withdrawal of immunosuppressive agents with mTORi switch may be associated with risk of acute or chronic rejection, adversely affecting graft and patient survival. In a retrospective study conducted to compare an mTORi group with a non-conversion group in patients who developed posttransplant cancer, no significant differences were shown in graft, patient, and rejection-free survival rates between the groups, and rate of cancer recurrence was higher in the non-conversion group.13 In our study, when cancer was diagnosed, we reduced the dose of mycophenolic acid/mycophenolate mofetil agents and stopped the CNIs. During follow-up, after new treatment had started (average of 38 ± 40 mo), KTRs in our study had no acute or chronic rejection and no progressive kidney failure.

Our study had some limitations. It was a single-center, nonrandomized retrospective cohort study. In addition, the number of participants in the study was relatively small, lacked an adequate control group, and had a short follow-up period.

Mechanistic target of rapamycin inhibitor-based drugs can be considered as an important maintenance immunosuppressive treatment option for KTRs with genitourinary cancers. 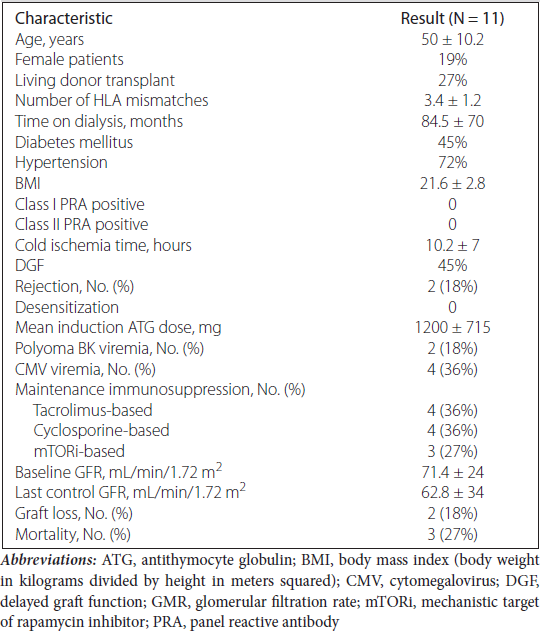