Atherosclerotic renal artery stenosis is one of the risk factors for cardiovascular death and can lead to the ischemic nephropathy. In this report, we describe the successful management of ischemic nephropathy that developed in a kidney transplant recipient with graft artery stenosis. The 52-year-old male patient had diabetes and hypertension and was a nonsmoker with hypothyroidism on replacement therapy. He had a history of recurrent urinary tract infection due to vesicoureteric reflux before starting hemodialysis in July 2009. In November 2020, he received a deceased donor renal allograft and showed slow graft function. He received thymoglobulin as induction and steroid, tacrolimus, and mycophenolate mofetil as maintenance therapy. He was discharged with nadir creatinine around 130 μmol/L. His diabetes was controlled by intensive insulin regimen. Later, he presented with graft dysfunction with partially controlled hypertension and suspected graft artery stenosis by Doppler ultrasonography but no evidence of obstruction. His tacrolimus level was adequate, and his echocardiography was unremarkable. He received empirical pulse steroid. A graft biopsy showed severe acute tubular necrosis, suspicious T-cell-mediated rejection, and negative C4d and positive SV40 stain, suggesting BK nephropathy. His BK viremia (500 copies/mL) and viruria (885 billion copies/mL) improved after immunosuppression minimization, although he remained dependent on dialysis. A repeated Doppler ultrasonogram showed flattening of the systolic wave. Computed tomographic angiography revealed diffusely attenuated graft arteries. The patient received graft artery angioplasty and stenting of the 2 arteries. The patient showed good response, with same-day urine production and Doppler showing good systolic wave. His graft function started to improve, and he was discharged with stable graft function. His immunosuppressive regimen was subsequently tailored to steroid and low-dose tacrolimus. In conclusion, we found that ischemic nephropathy could be reversed if properly managed, even in presence of other comorbidities.

Introduction
Atherosclerotic renal artery stenosis (RAS) is one of the risk factors for cardiovascular death.1 It can lead to ischemic nephropathy (ischemic renal disease), which is defined as the gradual reduction of glomerular filtration rate (GFR) or a loss of renal parenchyma caused by vascular occlusion, not attributable to other causes.2

The kidneys physiologically receive a relative blood supply that is 3- to 5-fold higher than the heart or liver. It seems that, in kidneys, perfusion pressure below 70 to 80 mm Hg (correlating with >70% of RAS) overcomes adaptive mechanisms and leads to hypoxia. Macroscopically, ischemic nephropathy is characterized by reduced kidney size, as noted in a study by Dean and colleagues3 that showed 10% reduction in 37% of RAS patients. In patients with atherosclerotic RAS, 44% have demonstrated disease progression, with 70% of these patients showing a significant decrease in kidney size.4

It is not completely clear whether reduced kidney size always indicates irreversible parenchymal changes. In histology examinations of ischemic nephropathy, both reversible tubular atrophy and glomerular collapse and irreversible glomerulosclerosis and interstitial fibrosis are present. Therefore, renal biopsies can only distinguish between the above-mentioned causes of kidney atrophy; however, biopsies are rarely done in these settings because of the procedural risk of complications and no clear therapeutic implications. The earliest and the most pronounced histopathologic features of ischemic nephropathy are tubulointerstitial lesions.5

Tubulointerstitial lesions may mediate the progression of chronic kidney disease toward irreversible damage. At the early phase of this process, cellular activation takes place, as mononuclear cells migrate into the interstitium and myofibroblasts release inflammatory mediators that lead to inflammation. Apoptosis induces tubular atrophy, which also occurs in patients with ischemic nephropathy. This phase of the disease may still be partly reversible until fibrosis begins.6

Clinically, patients who are likely to develop ischemic nephropathy are usually older age (over 50 years of age), hypertensive (usually severe or difficult to treat), have a history of smoking, and have hypercholesterolemia, coronary heart disease, or other clinical manifestations of atherosclerosis. These patients usually present with gradually decreasing GFR, mild to moderate proteinuria, and bland urinary sediment. Loss of GFR may be a valuable parameter for the progression of ischemic nephropathy, and the presence of proteinuria is a marker of the severity of ischemic nephropathy.9

In this study, we present a patient with ischemic nephropathy who recovered after graft artery stenosis.

A 52-year-old, nonsmoking Kuwaiti male patient with type 2 diabetes (diagnosed in 2008) presented with controlled hypertension (on 3 agents) and hypothyroid on replacement therapy. He did not show any coronary heart disease and was declared fit. He had a history of vesicoureteric reflux and recurrent urinary tract infections before reaching end-stage kidney disease; in July 2009, he started hemodialysis via left brachiocephalic fistula. He was mentally subnormal and was listed for a deceased donor renal transplant.

In November 2020, he received a graft from a deceased donor with 1/2/1 human leukocyte antigen mismatches and negative panel reactive antibody. He received thymoglobulin as induction and was maintained on steroid, tacrolimus, and mycophenolate mofetil. We optimized his immunosuppression according to our protocol. He received the graft with an aortic patch and 2 early branching arteries that were anastomosed end to side to the external iliac artery. Despite slow graft function, his postoperative course was smooth. He was discharged with nadir creatinine around 130 ?mol/L. The patient required diabetes control via an intensive insulin regimen as well as 2 oral agents to control his blood pressure during the early posttransplant period.

Two months later, the patient presented with graft dysfunction, although he was well hydrated. An abdominal ultrasonograph showed hepatosplenomegaly, moderate ascites, mildly dilated portal vein, and an average-sized graft with no collections. However, Doppler ultrasonograph showed findings suspicious for graft artery stenosis as the branches could not be visualized (Figure 1). A renogram showed perfused graft with no evidence of obstruction. The patient’s tacrolimus level was adequate, and his echocardiography was unremarkable. His liver function tests were standard, and he had no proteinuria.

We decided to proceed with graft biopsy together with empirical pulse steroid therapy. The biopsy showed severe acute tubular necrosis, suspicious T-cell-mediated rejection, negative C4d stain, and positive SV40 stain, suggesting associated BK nephropathy (Figure 2). His BK viral load in blood was less than 500 copies/mL; however, in urine, the level was very high (885 billion copies/mL). Therefore, we gradually withdrew mycophenolate mofetil, and tacrolimus was optimized at around a target level of 6 ng/mL. Within 2 weeks, his viruria improved significantly; however, no effect on graft function was shown, with graft function continuing to deteriorate until he became dialysis dependent. A repeated Doppler ultrasonograph showed flattening of the systolic wave (Figure 2).

A computed tomographic angiography (Figure 3) revealed diffuse attenuated caliber of the 2 graft arteries. Therefore, satisfactory graft artery angioplasty was carried out in addition to stenting of the 2 arteries. Fortunately, the patient started to make urine on the same day, with Doppler ultrasonograph showing a good systolic wave (Figure 1). His graft function started to improve with the next few days, and he was discharged with stable graft function. Later, his immunosuppressive regimen was tailored to everolimus as steroid therapy and low-dose tacrolimus.

Discussion
Identification and reversal of loss of kidney function due to occlusive diseases of the renal arteries can be major clinical challenges, especially among renal transplant recipients. Atherosclerotic RAS develops as a function of age and is commonly associated with other microvascular diseases, including nephrosclerosis and diabetic nephropathy. The risks of RAS are related to both declining kidney function and accelerating cardiovascular disease (refractory hypertension, congestive heart failure, myocardial infarction, stroke), resulting in increasing risk of morbidity and mortality. Progressive renovascular disease during medical therapy can produce renal failure with tubulointerstitial fibrosis.10,11

Our patient was hypertensive, which was controlled by 3 drugs; these did not include either angiotensin-converting inhibitors or receptor blockers to avoid the risk of acute graft dysfunction. Despite the cardiovascular benefits of therapy with angiotensin-converting inhibitors or receptor blockers, the development of functional acute renal failure during therapy warrants careful exclusion of renovascular disease.10 In our patient, we showed evidence of graft artery stenosis by computed tomography angiography after it was suspected by Doppler imaging. Therefore, acute graft dysfunction in our patient could be attributable to “ischemic nephropathy” because the entire renal mass was affected.12

There is a complex interplay of oxidative stress, endothelial dysfunction, and activation of fibrogenic cytokines during atherosclerosis and renal hypoperfusion. Although 25% to 30% of patients with impaired renal function have been shown to recover glomerular filtration after revascularization, many have no apparent change in kidney function, with 19% to 25% experiencing a significant loss of kidney function, in some cases as a result of atheroemboli.10

As shown in our patient, who was dialysis dependent, computed tomography angiography revealed diffuse attenuated caliber of the 2 graft arteries (Figure 2). Therefore, the patient required graft artery angioplasty and stenting of the 2 arteries, which improved graft function without any atheroembolic hazards. To select patients who are most likely to benefit from vascular intervention, clinicians should understand the pathophysiology of developing ischemic nephropathy and the potential hazards of revascularization in the setting of diffuse atherosclerotic disease.

Most of these salvageability predictors were shown in our patient, with recent-onset acute graft failure (dialysis-dependent), absence of chronic changes in the biopsy except for BK-associated nephropathy, and average graft size by both ultrasonography and computed tomography. These findings can explain the satisfactory response to graft angioplasty and stenting.

Clinical observations have confirmed that the rate of loss of GFR just before renal revascularization correlates with the potential for recovery of renal function in the year after endovascular stent placement. Studies of diastolic blood flow, such as the Doppler ultrasonogram renal resistive index, have demonstrated that high parenchymal resistance (?80) predicts poor renal functional recovery after successful revascularization.2,13 The parenchymal resistive index in our patient was 0.75, which carried a better prognosis.

Our patient matches some of previously identified risk factors of BK nephropathy,14 including being a male patient above 50 years and recipient of a kidney graft from a deceased donor. He also received potent induction with a lymphocyte-depleting agent and was maintained on tacrolimus-based immunosuppression. He developed slow graft function and ureteric stenting. However, he was not obese, and tests for cytomegalovirus were negative. The presence of BK nephropathy was another barrier against full recovery of graft function. Thus, we were obliged to follow an immunosuppression minimization protocol as a management strategy.

Ischemic nephropathy is reversible if managed properly at a suitable time considering the salvageable predictors, even in the presence of other comorbidities. 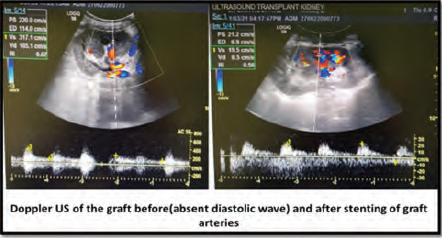 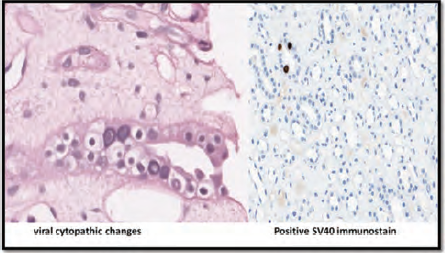 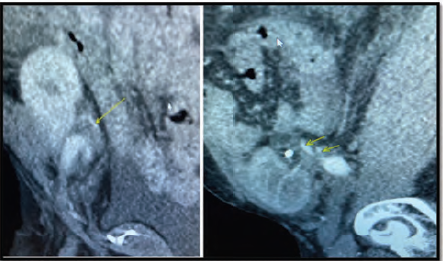