We retrospectively evaluated the medical records of 257 patients who underwent their first kidney transplant between 2008 and 2019 in our Department of Nephrology in Sahloul Hospital (Tunisia). Fifteen patients with diabetes mellitus before transplant were excluded from the analyses. Demographic data, cause of chronic renal failure, donor type, and immunosuppressive medications were collected from patient medical records. Laboratory data such as serum cholesterol and triglycerides, serum creatinine, glycemia, and 24-hour proteinuria at discharge were also collected. We reviewed whether patients developed DAT. Diabetes was defined according to the International Consensus Guidelines. For our analyses, we divided patients into those with and without DAT. Complication rates such as infection episodes, cardiovascular complications, and graft loss were recorded. Graft and patient survival rates were compared between the 2 groups.

Results
Of the 257 patients included in our study, 168 (65.4%) were male patients and 89 (34.6%) were female patients. The mean age was 32.9 ± 13.6 years. Cause of chronic kidney disease was chronic interstitial nephritis in 120 patients, glomerulonephritis in 47 patients, hypertensive nephrosclerosis in 17 patients, autosomal dominant polycystic disease in 4 patients, other causes in 15 patients, and unknown causes in 54 patients (Table 1). In 196 patients, initial renal replacement therapy was hemodialysis, with median treatment period of 17 months (IQR, 8-44). Of total patients, 247 received living related donor allografts and 10 received grafts from deceased donors. Immunosuppressive treatment consisted of tacrolimus in 145 patients, cyclosporine in 72 patients, and sirolimus in 6 patients (Table 1).

Discussion
Diagnostic criteria for DAT were standardized with the 2003 International Consensus Guidelines. With these criteria, DAT has been shown to affect 17% to 56% of renal transplant recipients.3 Our analysis found an incidence rate of 21.8%, which is similar to the international average.

Patient body mass index and age at transplant were significantly associated with development of DAT, which has also been reported in an Irish cohort by Tomkins and colleagues.5

Diabetes after transplant has been shown to be associated with an up to 3-fold increased risk of myocardial infarction, ischemic heart disease, or cardiovascular disease within 7 years after renal transplant.6

A major concern of DAT is its effect on patient and graft survival. Detriments to graft survival have been shown in large population-based studies. For example, in the United States, DAT was associated with higher rates of graft failure.4 However, in our study, graft survival was not affected by diabetes after transplant.

The development of DAT has been associated with mortality risk versus that shown in patients who do not develop DAT. We did not observe this finding in our retrospective analysis. In a study of 173 renal transplant recipients, 1-year patient survival rates in those with versus those without DAT were 83% versus 98%, respectively (P = .01).6 In contrast to earlier reports, a retrospective analysis of the Organ Procurement and Transplant Network/United Network for Organ Sharing database did not show a negative impact of DAT on transplant survival or mortality due to cardiovascular complications.7

Diabetes after transplant is a common complication after solid-organ transplant and has variably been reported to have an adverse impact on patient and allograft outcomes. The incidence and impact of DAT can be minimized through pre- and posttransplant screening to identify patients at higher risk.

From the Department of Nephrology, Sahloul Hospital, Sousse, Tunisia
Acknowledgements: The authors have no sources of funding for this study and have no potential conflicts of interest to declare.
Corresponding author: Amal Ouni, No. 108, Monastir 5060, Tunisia
Phone: +216 99503646
E-mail: ouniamal1991@gmail.com 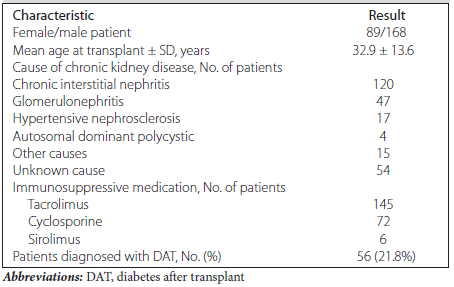 Table 2. Clinical, Laboratory, and Evolutionary Data Among Patients With and Without Diabetes After Transplant