Objectives: In this retrospective study, we aimed to determine the most common infectious agents in infants within the first 6 months of liver transplant.

Materials and Methods: Thirty-four infant patients with median age of 8 months (range, 4-12 mo) at the time of liver transplant were retrospectively evaluated. We evaluated causative organisms in bloodstream cultures and in subclavian catheter, urine, and intra-abdominal drainage fluid cultures. We also evaluated Epstein-Barr and cytomegalovirus infections by polymerase chain reaction in all recipients.

Infections are a major cause of morbidity and mortality after liver transplant (LT), especially in young children. There are limited studies of infectious complications after LT in infants. We aimed to determine the most common infectious agents in infants within the first 6 months of LT.

We conducted a retrospective study at Baskent University (Ankara, Turkey) of infant patients seen between March 2005 and September 2018. This retrospective study was approved by our institutional review board, and parents of study participants provided written informed consent. Thirty-four infant patients with median age of 8 months (range, 4-12 mo) at the time of LT were retrospectively evaluated. Patient characteristics, blood culture results, and clinical outcomes were extracted from electronic medical records. Cases of death within the first 6 months were excluded. The standard immunosuppressive regimen after LT consisted of tacrolimus and mycophenolate mofetil. Methylprednisolone was started intra­operatively (10 mg/kg/dose) and continued with tapering for the first 3 months after LT. The perioperative prophylaxis consisted of ampicillin (200 mg/kg/day) and cefotaxime (150 mg/kg/day), which were administrated intra­venously and continued for 72 hours after transplant. Antiviral and antifungal prophylactic regimens consisted of oral valganciclovir and oral fluconazole for the first 3 months after LT. Oral trimethoprim-sulfamethoxazole was initiated for Pneumocystis jiroveci infection prophylaxis. When recipients developed fever suggesting infection, blood cultures and subclavian catheter, urine, and intra-abdominal drainage fluid cultures were collected and analyzed. Subclavian catheter-related bloodstream infections were defined as pathogens that were identified from both catheter and blood cultures. Skin contaminants (such as coagulase-negative staphylococcus, Propionibacterium species) when positive in blood culture were con­sidered as pathogens causing bloodstream infections if the bacteria were isolated from 2 separate blood cultures and accompanied by clinical signs of infection. We evaluated causative organisms in bloodstream culture and in subclavian catheter, urine, and intra-abdominal drainage fluid cultures. We also evaluated Epstein-Barr virus and cytomegalovirus infections with the use of polymerase chain reaction in all recipients.

In children, bacterial infection after LT is an important factor in determining morbidity and mortality of recipients. However, studies of infectious com-plications after LT in children are rare, and previous studies had been conducted with limited numbers of patients and age-specific analyses. Immunity in infants is immature compared with that shown in older children; thus, the impact of immunosuppression might be enhanced in infants. Uribe and associates showed that the main cause of death was infection in children weighing less than 10 kg after LT.1

Gram-negative enteric bacteria from the intestine and bile duct are common pathogens related to peritonitis and cholangitis.2,3 In our study, Klebsiella pneumoniae was the most common bacterium isolated from bloodstream, intra-abdominal drainage fluid, and urine cultures. Similarly, Rhee and associates4 found that the most common isolated bacteria in blood cultures were coagulase-negative staphylococcus and Klebsiella pneumoniae in children after LT. Most infections after LT are attributable to perioperative problems. Rhee and associates4 showed that the Kasai operation was a risk factor for bacterial infections in recipients under age of 1 year. However, we found no significant independent risk factor for infections in infants post-LT. 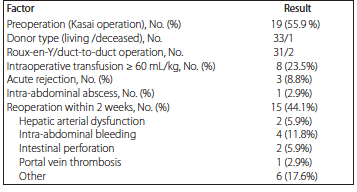 Table 1. Risk Factors for Infections in 34 Infants After Liver Transplant