Objectives: Wilson disease is an autosomal recessive disorder of copper metabolism. It leads to copper accumulation in various organs (liver, eye, brain) and deteriorates their functions. Symptoms usually appear in the second and third decades of life. Neurologic symptoms and manifestations may appear 2 to 5 years after liver involvement, and neurologic symptoms are usually movement disorders. The main treatment objective is to decrease accumulation of copper by increasing urinary copper excretion. With early diagnosis and treatment, the quality of life of patients with Wilson disease evolves. In this study, we aimed to evaluate the effects of liver transplant on neurologic manifestations and radiologic findings in patients with Wilson disease.

Materials and Methods: Since 1988, our center has performed 642 liver transplant procedures. Fifty-three patients with Wilson disease received a liver transplant during this period, with 15 adults patients included in our study. All study patients were evaluated by the same neurologist and radiologist. Tremor was scored by the glass scale test. Radiologic evaluations were made by cranial magnetic resonance imaging.

Results: Before liver transplant, 4/15 study patients had tremor. In 1 patient, tremor was accompanied by dystonia; the patient’s imaging findings and neurologic manifestations had regressed posttransplant. In the other 3 study patients with tremor, tremor decreased without any change in imaging findings. New-onset tremor was seen in 1 patient after liver transplant, but this patient had no observed imaging changes. This situation was correlated with immunosuppressive therapy.

Conclusions: Neurologic recovery can be achieved in patients with Wilson disease with early diagnosis and treatment. Radiologic findings can be improved after therapy.

Wilson disease (WD) was defined by Samuel Alexander Kinnier Wilson in 1912. This rare autosomal recessive disorder of copper metabolism is characterized by accumulation of copper in various organs.1,2 Neurologic manifestations appear in the second decade, manifesting with cognitive decline, drooling, and extrapyramidal and pyramidal features. In 40% to 50% of patients, neurologic symptoms mostly appear as movement disorders (tremor, dystonia, Parkinsonism).3 The criterion standard for diagnosis is observation of copper accumulation in liver biopsy. Copper accumulation in the liver exceeding 250 μg/g gives rise to suspicion of WD.4 Cranial magnetic resonance imaging (MRI) can reveal the characteristic signal changes that are reported to correlate with neurologic symptoms and severity of illness.5 However, the use of cranial MRI in WD can be conflicting.6 Differences can be seen in different sequences. In a study that evaluated the association of cranial MRI and prognosis, inves­tigators evaluated the sensitivity of different MRI sequences in revealing abnormalities in patients with WD and neurologic manifestations and correlated these findings with disease severity and outcome.7 In our study, we evaluated neurologic symptoms and MRI findings of patients with WD before and after liver transplant (LT).

Since 1988, our center has performed 642 LT procedures. Fifty-three patients with WD received LT during this period, with 15 adult patients from this group included in our study. Demographic data and neurologic symptoms before and after LT were obtained from medical records. All 15 patients were evaluated by the same neurologist and radiologist. This study was approved by the ethics committee of Baskent University Medical Facility.

Of 19 adult patients with WD who had LT, 15 patients (12 men, 3 women) consented to study involvement. Mean age of study patients was 35.2 years old. Patients with WD without any neurologic symptoms did not have an MRI evaluation before LT. Tremor was seen in 4/15 patients with WD before LT (26.6%), with 1 of these patients having both tremor and dystonia. Tremor had regressed in all 3 patients with tremor only before LT. These 3 patients were all evaluated by MRI before LT, but none had typical presentations for WD. However, manganese accumulation due to liver failure occurred in all 3 patients. Cranial MRI findings were not different before and after LT. In the patient with both tremor and dystonia, these symptoms regressed post­transplant. Brain MRI findings of this patient were typical for WD, and lesions regressed after LT (Figures 1, 2, and 3). New-onset tremor after LT was seen in 1 patient; however, the patient had normal MRI findings. This new-onset tremor was assumed to be due to immunosuppressive therapy. One patient had a typical WD lesion in MRI but had no neurologic symptoms or findings (Table 1).

Wilson disease is a genetic disorder that causes pathologic intracellular copper accumulation, primarily in liver and brain.9 Liver transplant is the only treatment option for WD when fulminant liver failure or decompensated liver cirrhosis occurs. In addition, LT is indicated when the patient does not respond to pharmacologic treatment.2

In our study, we evaluated 15 patients with WD to investigate neurologic and radiologic findings and outcomes before versus after LT. Patients with WD may present with neurologic findings, and all patients with WD had cranial MRI during follow up. All 4 patients with movement disorders had preoperative cranial MRI; however, the other 11 patients did not have preoperative cranial MRI. After transplant, 1 patient had a typical WD lesion in MRI but no neurologic symptoms or findings. New-onset tremor after LT was seen in 1 patient, and the MRI of this patient was normal. This new-onset tremor was assumed to be due to immunosuppressive therapy. There was a significant difference between pre­transplant and posttransplant MRI findings of the patient with WD who had both dystonia and tremor. Tremor had regressed in all 3 patients who had only tremor before LT. These 3 patients had been evaluated by MRI before and after LT, with no differences in findings (Table 1).

In our study, the incidence of tremor was higher than that reported by Dehghani and associates.10 The incidence of tremor in patients with WD is much higher than the incidence in patients with other chronic liver failure diseases. In a previous study, we evaluated post-LT neurologic complications but excluded patients with WD.11 In a review of outcomes of 4 patients with WD before and after LT, Laurencin and colleagues12 reported clinical recovery in all 4 and regression in cranial MRI findings in 3 patients. In our study, we had 4 patients with preoperative neurologic symptoms, and all had recovery of modified ranking scores. However, 1 patient in the previous study had regression on MRI.12 Mocchegiani and colleagues reported clinical and radiologic recovery in a 19-year-old patient with WD after LT.13 In another report from Haberal and colleagues,14 a 36-year-old patient with neurologic WD and without cirrhosis who received auxiliary partial living-donor LT presented with significant neurologic recovery at follow-up. The investigators suggested auxiliary partial living-donor LT as a treatment option in patients with neurologic WD and without cirrhosis.14 In a 28-year-old patient with WD and without neurologic symptoms, Litwin and associates reported regression in the patient’s cranial MRI findings after LT.15

Neurologic recovery and radiologic regression can be achieved by LT; as such, this treatment is effective in improving the quality of life of patients with WD. In our study, neurologic recovery was also seen in patients after LT. Regression in cranial MRI was seen in 1 patient; however, we have no data about duration of regression of cranial MRI findings. One patient in our study had new-onset tremor after LT; however, the patient’s MRI had no changes, and this situation was correlated with immunosup­pressive therapy. There have been case reports on neurologic and radiologic changes in patients with WD after LT.12-15 However, prospective trials should be designed on this issue.

From the Departments of 1Neurology, 2Transplantation, 3Radiology, and 4Gastroenterology, Baskent University, Ankara, Turkey
Acknowledgements: The authors have no sources of funding for this study and have no conflicts of interest to declare.
Corresponding author: Ebru H. Ayvazoğlu Soy, Department of Transplantation, Baskent University, Ankara, Turkey
Phone: +90 312 2036868
E-mail: ebruayvazoglu@gmail.com 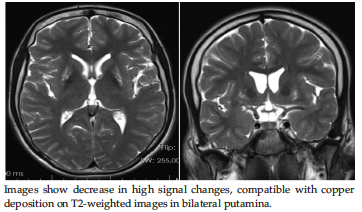 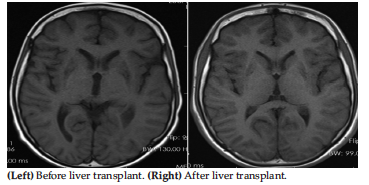 Table 1. Frequency of Wilson Disease Symptoms and Magnetic Resonance Imaging Findings Before and After Liver Transplant