The complement system plays a central role in inflammatory reactions. It also conducts adaptive immune responses with T and B cells. Complement dysregulation is related to different glomerular pathologies (atypical hemolytic uremic syndrome, C3 glomerulopathy, dense deposit disease, etc.). The main problem is uncontrolled stimulation of the alternative complement pathway.1 This uncontrolled stimulation can continue after transplant, and it can result in disease recurrence and graft loss. Patients with complement dysregulation have high recurrence risk after transplant; however, with trough-effective therapeutics, renal transplant can be an option for these patients. Here, we present 2 patients with complement dysregulation-related renal disease and their outcomes after renal transplant.

Patient 1
Patient 1 was a 4.5-year-old boy; cause of renal failure was atypical hemolytic uremic syndrome. Com­plement C3 levels were within normal ranges. Eculizumab treatment was started before renal transplant and continued for 6 months. He was not responsive to eculizumab treatment before renal transplant. Renal function recovery was not achieved. Patient 1 received a graft from his father. His immunosuppressive therapy after transplant consisted of prednisolone, calcineurin inhibitor (cyclosporine A), and mycophenolate mofetil. Eculizumab treatment was continued after transplant as preventive therapy. The patient had been receiving 300 mg eculizumab every 2 weeks. It was stopped at year 2 posttransplant. He did not need any biopsy intervention. At 2.5 years post­transplant and after cessation of eculizumab therapy, he had no episodes of acute rejection or disease recurrence. At year 4 posttransplant, his serum creatinine level was 0.87 mg/dL and glomerular filtration rate was 97.58 mL/min. No reduction in complement C3 serum level was observed during follow-up. Mutation analyses for complement components still continue.

Patient 2
Patient 2 was a 14-year-old boy; cause of renal failure was C3 glomerulopathy. Complement C3 serum level was decreased. He was not responsive to eculizumab treatment before renal transplant. After 18 months of dialysis, he received a renal transplant from his brother. His immunosuppressive therapy after trans­plant consisted of prednisolone, calcineurin inhibitor (cyclosporine A), and mycophenolate mofetil. At month 4 posttransplant, a biopsy was performed related to increased serum creatinine level. C3 glo­merulopathy recurrence was demon­strated at biopsy, and serum creatinine level was 1.96 mg/dL at this time. Eculizumab was started as a rescue therapy, and he received 1200 mg eculizumab every 2 weeks. No episodes of acute rejection or disease recurrence were shown after eculizumab therapy. At year 4 posttransplant, his serum creatinine level was 2.07 mg/dL and glomerular filtration rate was 38.04 mL/min. Patient 2 continued to receive eculizumab therapy monthly. A reduction in complement C3 serum level was not observed after starting eculizumab therapy during follow-up. Mutation analyses for complement components have continued for Patient 2 (Table 1).

Renal transplant is the best treatment choice for end-stage renal failure during childhood. The prevalence of disease recurrence is higher in children than in adults. Disease recurrence is one of the important risk factors for graft loss after transplant.2 The complement system is an important and powerful part of host defense. Half of the components of the system are related to its regulation. Dysregulation and uncontrolled activation of the complement system will end with self-tissue damage. This dysregulation is often related to genetic mutations of complement components. The harmful dysregulation and uncontrolled activation of the complement system without any prevention or treatment will cause disease recurrence and graft loss.3,4 Atypical hemolytic uremic syndrome and C3 glomerulopathy are different clinical and pathologic diseases. Dysregulation and uncontrolled alternative pathway activation of the complement system are the similar pathogenic mechanisms for both of these diseases. Eculizumab, a humanized monoclonal anti-C5 antibody, blocks uncontrolled alternative pathway activation at the level of C5a and lytic C5b-9 complex generation. It can be used for treatment and prevention after renal transplant for diseases related to complement dysregulation, such as shown in our patients.5 Timing of start or cessation of eculizumab therapy and time interval between doses are still unclear. These decisions must be made in accordance with the clinical and pathologic aspects of each patient.6

From the 1Department of Pediatric Nephrology, 2Department of Pathology, and the 3Department of General Surgery, Baskent University, Ankara, Turkey
Acknowledgements: The authors have no sources of funding for this study and have no conflicts of interest to declare.
Corresponding author: Kaan Gulleroglu, Baskent University Pediatric Nephrology Department, Temel Kuğuluoğlu C. No: 24 K: 3, Bahcelievler-Cankaya 06490,Ankara, Turkey
Phone: +90 312 2234936
E-mail: kaangulleroglu@yahoo.com 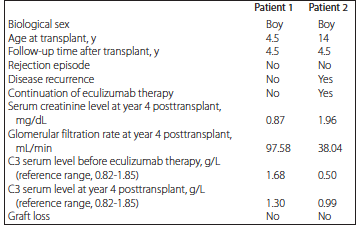