Objectives: Kidney transplant started at Başkent University Konya Hospital in July 2016. In this study, we compared the causes of brain death and the organ donation rates in our center between 2013 and 2016 versus between 2016 and 2019.

Materials and Methods: Patient files and records were analyzed retrospectively. Age, biologic sex, cause of brain death, and organ donation rates of patients diagnosed with brain death were examined and compared.

Organ donation is the most effective treatment for end-stage organ failure due to cost advantage, improved patient survival, and improved quality of life.1 Although the number of patients on organ wait lists increases every day, the difference between organ demand and organ supply is the biggest obstacle to increasing the number of organ transplants.2 Although nearly 100 000 solid-organ transplants are performed each year in the world, more than 1 million people are still waiting for an organ.3 Unfortunately, with prolonged organ wait time, many patients die without organ transplant surgery.

The first successful kidney transplant surgery in Turkey was performed in 1975. It was performed by Prof. Dr. Haberal and his team. Legal regulations regarding organ donation in Turkey were established in 1979 before many European countries. The National Coordination System, which was founded in 2000, is divided into 9 Regional Coordination Centers in terms of geographical, technical, and population factors. Regional coordination centers coordinate all organ transplant activities in the provinces. In developed countries, 80% of kidney transplants are from deceased donors; however, in Turkey, this rate is 20% and more than 95% are from living related donors. This has led to increased numbers of patients on the deceased-donor organ wait list, which already has high numbers. In 2017, there were 21 558 patients on the kidney transplant wait list in Turkey.

Data of patients diagnosed with brain death between 2013 and 2019 at the Başkent University Konya Hospital were reviewed retrospectively. Biologic sex, age, cause of brain death, and organ donation status were recorded. Patients were divided into 2 groups: those seen from 2013 to 2016 and those seen from 2016 to 2019.

Brain death, which is irreversible functional loss of the brain and brain stem, is accepted legally and medically as actual death.4 According to Current Law 2238 in Turkey, brain death diagnosis must be decided unanimously by 2 specialists, one of whom must be a neurologist or a neurosurgeon and the other must be an anesthesiology and reanimation specialist or intensive care specialist. In addition, to obtain organs from a deceased donor, brain death must have occurred and family consent must be given. Before the organs are removed, the person with brain death must have already filled an organ donation card and family consent must also be given.

Because education on this issue can directly affect organ donation awareness and attitudes, com­prehensive training, including on organ transplant and donation, brain death, and the legal process involved, can contribute to increased organ donations for transplant. In addition, to emphasize that there is no religious ban on organ donation, a meeting with relevant religious institutions may be effective. A positive relationship established with relatives of intensive care patients with brain death and the information given about the patient’s condition can directly affect a families’ decision on organ donation.9

In addition to sociodemographic characteristics, secular, religious, and cultural factors play an important role in the willingness of an individual to agree to organ donation and to the donation of organs from family members.10 Legislative initiatives, policy changes, and educational campaigns could also increase organ donation rates.11 Therefore, not only health professionals but also legislators and religious officials have an important responsibility for raising awareness on organ and tissue donation to members of the public.

We believe that establishing a healthy com­munication with relatives of the patients, as well as being a dedicated organ transplant center, is an important reason for our much higher organ donation rates than the general rate in Turkey. Healthy communication is the most effective way to establish trust with next-of-kin and the general public. In Turkey, the rate of organ donation from patients diagnosed with brain death is 24% to 28%; however, the rate at our center is well above this.12 The main principle is for all intensive care physicians and organ transplant coordinators to believe, trust, and encourage this treatment.

To increase organ donation, about half of health personnel at our center have agreed on the need for greater community education, clerical guidance, information to patients and their relatives regarding the donation process, and legislation that would allow for organ donation without consent from the family of those with confirmed brain death. As shown previously, increasing public awareness, through use of the media, community education, and legal regulations, can increase the rate of organ donation.1

Deceased donors should definitely be preferred to living donors. The following should be considered with the aim to increase our organ donation rates after brain death. First, a sense of trust should be established with the family during the intensive care process. Second, training in the brain death concept and clearer determinations of brain deaths are needed. Third, efforts should be made to increase family approval rates. Fourth, there should be strict supervision of patient results and better patient follow-up. Fifth, efforts should be made to increase public awareness, using media, community education, and legal regulations. Finally, transparency in access of results should be ensured.

Increasing the number of deceased donors for organ transplant is one of the most important health problems that we need to solve in our country. Health workers, bureaucrats, media members, clergy, and educators are all needed to solve this issue.

From the Departments of 1General Surgery, Division of Transplantation, 2Radiology, 3Nephrology, and 4Anesthesiology, Başkent University, Ankara, Turkey
Acknowledgements: The authors have no sources of funding for this study and have no conflicts of interest to declare.
Corresponding author: Mahir Kırnap, Department of General Surgery, Baskent University Hospital, Maresal Fevzi Cakmak Cad. No: 10, Ankara 06490, Turkey
E-mail: mahirkir@hotmail.com 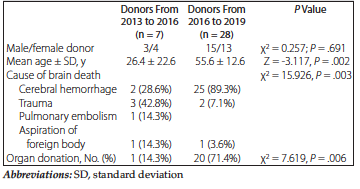 Table 1. Donor Characteristics, Causes of Death, and Organ Donation Rates According To Year