Objectives: We investigated the clinical, epidemiologic, and pathogenetic features of viral hepatitis C in hemodialysis departments.

Materials and Methods: This multicenter study included patients who were seen at the hemodialysis depart­ment in Tashkent, Uzbekistan and at regional departments located in the Republic of Uzbekistan. We examined 395 patients who were on hemodialysis from 3 to 15 years. A diagnosis of chronic viral hepatitis C was made on the basis of anamnesis, clinical laboratory data, and detection of immunoglobulin G antibodies for hepatitis C virus.

Conclusions: In our study that included patients seen at hemodialysis departments in Uzbekistan, chronic viral hepatitis C was greatly prevalent, although occurring mainly in a minimal form of the pathologic process. Chronic viral hepatitis C has an aggravating effect on the course of underlying diseases with development of adverse outcomes.

Recent scientific achievements have increased the understanding of the pathogenesis of chronic hepatitis C and its outcomes. This knowledge has affected methods for disease diagnosis, has led to realization of the main therapeutic directions in treatment, and has significantly improved prognosis.1 In recent years, the number of recorded cases of viral hepatitis B and C has changed significantly, with incidence of hepatitis C virus (HCV) sharply increased versus a decrease in the incidence of hepatitis B virus (HBV).2

Among the branches of medicine that are at high risk of spreading viral hepatitis are the departments of chronic hemodialysis, where frequent surgical interventions on vessels, a continuous treatment process, and frequent blood transfusion have caused a high risk of contracting viral hepatitis. Viral hepatitis can be a serious problem for many hemodialysis centers due to its high incidence in both patients and employees of these departments.3-5 The severe nature of its pathology in patients with chronic renal failure (CRF), which can have an aggravating effect of various intercurrent infections in underlying diseases and which can worsen prognoses, underlines the importance of this problem today.

A common transmission route for HBV and HCV leads to the formation of associated forms of the disease in patients with end-stage CRF. Presently, studies are not clear with regard to this problem and data are so far contradictory.6-8 Here, we investigated the clinical, epidemiologic, and pathogenetic features of HCV in our local hemodialysis departments.

In this multicenter study, we included patients from hemodialysis departments in Tashkent and other regional departments in the Republic of Uzbekistan. We examined 395 patients who had been undergoing hemodialysis from 3 to 15 years. Patients ranged from 17 to 65 years old, with 132 women (33.4%) and 263 men (66.6%). Among patients with end-stage CRF, chronic glomerulonephritis was diagnosed in 244 patients (61.7%), chronic pyelonephritis in 64 patients (16.2%), polycystic kidney disease in 18 patients (4.6%), urolithiasis in 4 patients (1%), nephrosclerosis associated with diabetes mellitus in 60 patients (15.2%), systemic lupus erythematosus in 3 patients (0.79%), and gout in 2 patients (0.51%).

All patients underwent clinical and laboratory examinations, including ultrasonographic exami­nations of the liver and kidneys. Patients underwent continuous conservative therapy and hemodialysis. The diagnosis of chronic HCV was based on an anamnesis, clinical and laboratory data, and the detection of anti-HCV immunoglobulin G in blood using enzyme-linked immunosorbent assay. RNA HCV genotypes and viral load were determined by polymerase chain reaction. To exclude mixed infections, all patients were tested for blood serum for HBsAg, anti-hepatitis D virus (HDV), and human immunodeficiency virus (HIV) infection by enzyme-linked immunosorbent assay. For analysis and processing of the obtained results, the generally accepted methods of variation statistics were used.

When we evaluated the course of chronic HCV in the presence of end-stage CRF, 11 patients (34%) showed disease progression in the form of transient chronic renal hepatic failure with the development of adverse outcomes. Thirteen patients in this group with chronic HCV and end-stage CRF (40%) had hemor­rhagic syndrome and developed progressive anemia, and 8 (25%) developed persistent polyserositis in the form of hydrothorax, ascites, and pericarditis. These results reflect the aggravating effects of chronic HCV on end-stage CRF (Figure 3).

Among patients who were receiving hemodialysis, chronic HCV had the highest prevalence among viral infections; however, most patients had a minimal form of activity in the pathologic process. This low-symptom course of chronic HCV in patients with end-stage CRF may be because these patients are regularly treated with hemodialysis and thus viruses and their waste products are regularly removed from the bloodstream, leading to decreased levels of viremia.9 On the other hand, patients on hemodialysis have low levels of immunity.8-10 We suggest that low immunity increases the incidence of chronic hepatitis, since HCV, HBV, and HDV are immune-mediated viral infections, and the severities of these are correlated with the degree of host immune response. Further detailed studies of the clinical and laboratory manifestations of viral hepatitis in patients with end-stage CRF are needed, as well as investigations on additional tests of viral infection activity and additional antiviral therapies.

In patients on hemodialysis in Tashkent and in other regions in the Republic of Uzbekistan, the incidence of chronic HCV prevails. In patients with end-stage CRF, HCV mainly proceeds in a minimal form of the pathologic process. Chronic HCV can have an aggravating effect on the course of the underlying disease with the development of adverse outcomes. 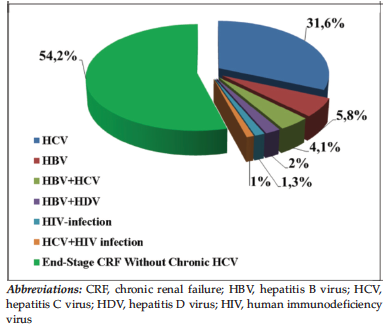 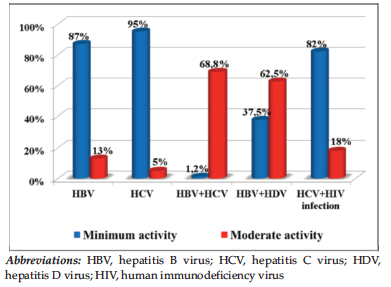 Figure 2. Distribution of Patients With Viral Hepatitis According to Pathology Activity in the Liver 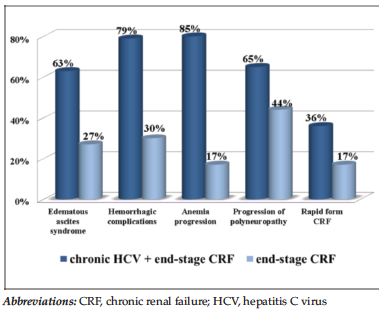 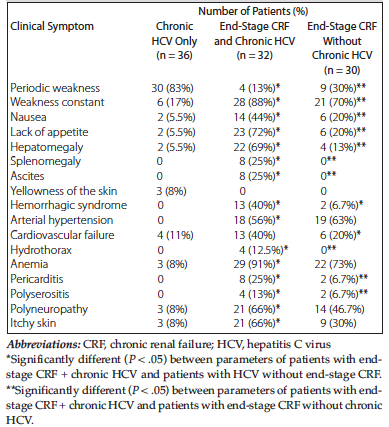