Materials and Methods: From November 1975 to May 2019, our transplant team performed 3012 kidney transplant procedures at different units within Baskent University Transplantation Centers. We retrospectively analyzed data of patients who were diagnosed with posttransplant diabetes mellitus between 2010 and 2019. The diagnosis was made according to the 2001 American Diabetes Association criteria (fasting plasma glucose level ≥ 126 mg/dL [7 mmol/L] in 2 measure­ments or random blood glucose level ≥ 200 mg/dL [11.1 mmol/L] within 12 months posttransplant).

Posttransplant diabetes mellitus (PTDM) is a severe and common metabolic complication that occurs after kidney transplant.1 The incidence of PTDM after solid-organ transplant varies between 4% and 25%.2,3 The variance in PTDM incidence can be partially because of the lack of a standard definition for this condition, the follow-up duration, the diversity of the modifiable and nonmodifiable risk factors, and the type of organ transplant.

Posttransplant diabetes mellitus severely affects the quality of life and long-term survival of kidney transplant recipients.4-7 This disease is a significant cause of morbidity and mortality in transplant patients. Early diagnosis of this condition, in addition to extensive treatment of diabetes mellitus and accompanying diseases, will affect graft survival.3

The aim of this study was to investigate the incidence of PTDM among kidney transplant patients in our center and to evaluate the risk factors for PTDM.

From November 1975 to May 2019, 3012 kidney transplant procedures were performed at different centers by our same transplant team. We retro­spectively analyzed the data of diabetes mellitus development posttransplant in procedures performed at the Baskent University Transplantation Centers between 2010 and 2019. Patient age, sex, body mass index (BMI), cause of primary kidney disease, history of dialysis type, type of kidney transplant (living or deceased), pharmacologic treatment, history of diabetes, and follow-up data were recorded retrospectively from the electronic database. Those previously diagnosed with diabetes mellitus, found to have transient hyperglycemia during follow-up, and under 18 years old were excluded from the study.

The diagnosis of PTDM was made according to evaluations performed in the 1st year after kidney transplant. Diagnosis was based on the following diagnostic criteria recommended for diabetes by the 2013 international consensus meeting on post­transplant diabetes mellitus: symptoms of diabetes (polyuria, polydipsia, or unexplained weight loss) plus random blood glucose ≥ 200 mg/dL or presence of fasting plasma glucose (FPG) ≥ 126 mg/dL or second hour plasma glucose ≥ 200 mg/dL during oral glucose tolerance test.8

Immunosuppression
Our standard immunosuppressive protocol (maintenance therapy) includes a triple therapy mainly comprising a calcineurin inhibitor (cyclosporine or tacrolimus), mycophenolate mofetil, and steroids. Methylprednisolone treatment was initiatedat 1.5 mg/kg for 3 days before treatment and gradually decreased to 5 mg at week 12 posttransplant. Mycophenolate mofetil at 2 × 1000 mg/day or mycophenolate sodium at 2 × 720 mg/day and calcineurin inhibitors (tacrolimus or cyclosporine) was initiated on the day of surgery. Cyclosporine was initiated at 5 mg/kg/day and tacrolimus at 0.1 mg/kg/day and later adjusted according to total blood levels. At month 3 posttransplant, target cyclosporine levels were maintained at 150 to 250 ng/mL and target tacrolimus levels at 6 to 10 ng/mL.

In the 2014 Posttransplant Diabetes Mellitus con­sensus report, the term new-onset diabetes mellitus after transplant, which also includes posttransplant transient hyperglycemia, was replaced with PTDM; consequently, transient hyperglycemia was excluded from the definition. According to this consensus, PTDM diagnosis must be made when a stable clinical condition is established after main­tenance immuno­suppressive treatment regimen is adopted, stable allograft kidney function is attained, and acute infection is eliminated. According to this consensus, a PTDM diagnosis is recommended to be made at the first year after transplant.8 In the literature, incidence of PTDM that included transient posttransplant hyperglycemias varies; our study showed incidence consistent with the current literature, which was 15%.9

In the literature, modifiable and nonmodifiable risk factors have been described for development of PTDM. Among the nonmodifiable risk factors are race/ethnicity, age, being male, family history, HLA phenotype, deceased donor, autosomal dominant polycystic kidney disease, and impaired pretransplant FPG. Modifiable risk factors are immunosuppressive treatment, obesity, and posttransplant opportunist infections.10 In our study, it was found that pretransplant presence of polycystic kidney disease, BMI, deceased donor, and sex were not risk factors for PTDM. Obesity has been known to be a risk factor for both type 2 diabetes mellitus and PTDM.10,11 In our study, BMIs of kidney transplant patients were below the obesity threshold. This might be the reason for the absence of a significant difference in terms of PTDM development. In our study, although pretransplant IFG incidences were similar in both groups in terms of PTDM development, FPG level in the PTDM group was significantly higher than that shown in the non-PTDM group. Although the FPG threshold for IFG in the normal population is 110 mg/dL according to the World Health Organization, the 2013 American Diabetes Association criteria sets this as 100 mg/dL.12 The pretransplant FPG level threshold for PTDM might be set to lower values in the future. Because our study was a single-center retrospective cohort study, further extensive studies that support this idea are required.

The most well-defined risk factors for development of PTDM are the prescribed immunosuppressive regimens and patient age.13 In a systematic review, immunosuppressive regimen was estimated to account for 75% of PTDM development.14 Calcineurin inhibitors and corticosteroids have direct toxic effects on beta cells and contribute to peripheral insulin resistance in the liver.15-17 The incidence of PTDM after kidney transplant has been found to be higher in patients treated with tacrolimus than in patients treated with cyclosporine.15 Tacrolimus-associated PTDM development is dose dependent.18 Several studies have suggested that the maximum tacrolimus plasma concentration should be 15 ng/mL in the immediate posttransplant period.19 In our center, tacrolimus plasma concentration was maintained between 6 and 10 ng/mL during the chronic period posttransplant. The ideal corticosteroid dose to prevent a significant increase in PTDM is still a matter of debate. Prednisone at higher than 1.3 mg/kg/day has been shown to be associated with a high risk of renal PTDM. Use of low prednisolone at 5 mg/day was the most emphasized in the literature,2 and corticosteroid maintenance in our center was also 5 mg/day. In our center, a triple immunosuppressive treatment regimen of tacrolimus, mycophenolate mofetil, and corticosteroid is used after kidney transplant, and most patients used tacrolimus while few used cyclosporine; however, no difference was detected between the 2 treatment regimens in terms of PTDM development. Most patients received tacrolimus-based immunosuppressive treatment, with low targeted therapeutic concentrations between dosing intervals. Thus, immunosuppressive type may not be a risk factor.

Studies have shown that PTDM decreases graft survival.21,22 In our study, PTDM and non-PTDM groups were found to have similar graft survival results. This may be likely because of good glycemic control, demonstrated by median HbA1C level during follow-up of patients who developed PTDM.

Because mortality in transplant recipients is largely a result of cardiovascular factors,20 investigations of variables associated with increased cardiovascular risk and correction of these variables are critically important. In kidney transplant patients, development of PTDM, which is the strongest risk factor known, requires careful evaluation, especially in older patients and under high FPG conditions. Similar studies will help identify patients with high risk for PTDM, which will promote close monitoring of glucose levels and timely and rapid treatment of hyperglycemia. 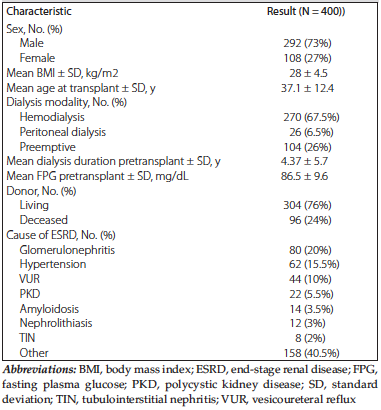 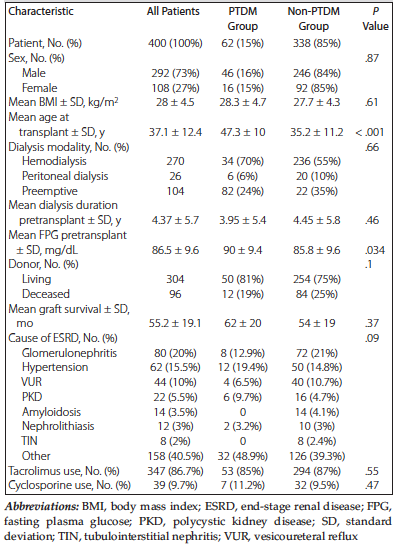 Table 2. Comparison of Patients With and Without Posttransplant Diabetes Mellitus