Kidney transplant (KT) is considered to be the best treatment option for patients with end-stage renal disease as it can lead to better quality of life and higher rate of survival.1,2 However, allograft rejection remains a major barrier for the longevity of renal graft survival.3 Antibody-mediated rejection (AMR) is a complex and a multifactorial process that involves the activation of anti-HLA/anti non-HLA antibodies that result in complement-dependent cytotoxicity.4-6 Banff classification describes AMR according to the histologic evidence of acute tissue injury, current/recent antibody interactions with vascular endothelium, and detection of donor-specific antibodies (DSAs).7 Antibody-mediated rejection has been well-differentiated from acute cellular rejection (ACR); graft survival rates for AMR are significantly inferior compared with rates for ACR.8,9 In our study, we aimed to determine the risk factors of AMR for prevention, early diagnosis, and appropriate treatment of AMR; determining these factors is vital to maintenance of long-term graft survival.

Our study included 124 KT recipients (37 female [29.8%] and 87 male [70.2%]) who underwent KT between 2006 and 2018. Recipients who were diagnosed with AMR on kidney allograft biopsy (AMR group) were evaluated demographically and clinically. Patients in the AMR group who had concomitant acute cellular rejection (AMR + ACR patients; n = 51) were also evaluated. We also compared graft outcomes of 124 AMR patients versus 75 KT recipients (24 female [32%] and 51 male [68%]) who had no diagnosis of AMR on transplant biopsy (non-AMR group).

The standard immunosuppressive treatment in our center consisted of a calcineurin inhibitor or a mammalian target of rapamycin inhibitor, pred­nisolone, and mycophenolate mofetil.

When we compared KT recipients according to the immunosuppressive regimens, patients who received tacrolimus had lower AMR episodes than KT recipients who received sirolimus or cyclophosphamide. The prior KT rates of the 2 groups were not significantly different (8% vs 7.3%, respectively). However, KT recipients who were panel reactive antibody (PRA) positive (5%) had an AMR episode and were included in the AMR group. Some patients in the AMR group had a concomitant diagnosis of ACR on transplant biopsy. When we compared the histologic findings of patients with AMR only versus the AMR + ACR group, focal, diffuse, and circular C4d staining results on biopsies were not significantly different. However, significantly higher fibrosis index rates were shown in patients in the AMR + ACR group versus the AMR-only group (39.2% vs 15.2%, respectively; P < .05). Fibrosis index and percentage of C4d staining were not independent risk factors for graft loss in the AMR group. In addition, diffuse staining of C4d was associated with graft loss rate of 47.2% compared with graft loss rate of 21.1% with focal staining and graft loss rate of 31.6% with circular staining (P < .05). Creatinine levels of patients at the time of graft kidney biopsy were significantly higher (3.7 ± 1.7 mg/dL) in patients who experienced a graft loss compared with patients without graft loss (2.2 ± 0.9 mg/dL; P < .05).

Patients in the AMR group experienced 15.3% rate of graft loss, whereas there was no graft loss in the non-AMR group (P < .05). Positive PRA levels and blood transfusion before KT were found to be risk factors of AMR in KT recipients.

Antibody-mediated rejection is a primary factor for graft loss in KT recipients. De novo DSAs also contribute to chronic AMR. Despite intensive conventional immunosuppressive therapies, rates of graft loss because of AMR remain at 15% to 50%.5-7,10 According to Banff classification, AMR is a mor­phologic, immunologic, and serologic diagnosis that results from an antibody-induced inflammation. Detection of DSAs and C4d staining are patho­gnomonic findings of AMR.7

In our study, we found no differences in men versus women with regard to AMR diagnosis; however, some studies have found female sex to be an independent risk factor for AMR.11,12 One reason for our different finding could be the unequal distribution of men versus women in our KT population.

Donor biologic sex was not found to be an important factor in development of AMR in our study; however, higher donor age was an independent risk factor for AMR. The older allograft kidneys may be more prone to antibody exposure with higher tendency of inflammatory processes such as atherosclerosis. Aging of the kidney may be a contributing factor for AMR that should be further investigated.

Patients in the AMR group had significantly higher rates of blood product transfusion before KT than patients in the non-AMR group (67.4% vs 32.6%, respectively; P < .05), which is similar to recent literature findings. Even 2 to 3 mL of leukocytes may trigger sensitization in KT recipients.13 Blood product transfusion should be avoided in KT candidates unless necessary.

Our findings showed that KT recipients who are on tacrolimus therapy had lower rates of AMR. This is also comparable to findings in the literature showing lowered DSA levels with tacrolimus therapy com­bined with mycophenolate.14-16 Tacrolimus doses should be cautiously lowered in the follow-up period after KT.

In our study, fibrosis index rates were significantly higher in patients in the AMR + ACR group compared with patients with AMR only (39.2% vs 15.2%, respectively; P < .05). Fibrosis index is a major sign of chronicity in all tissues and in allografts, and higher fibrosis index was shown to be associated with inferior graft survival in our patient group, which is similar to previous findings.14-17

Creatinine levels in patients at the time of graft kidney biopsy were significantly higher (3.7 ± 1.7 mg/dL) in those who experienced graft loss than in those who did not have graft loss (2.2 ± 0.9 mg/dL; P < .05). This may be because of a late referral of a patient to the transplant unit for allograft biopsy and may also be a feature of the destructive process of AMR with concomitant loss of kidney function.5-8 The monitoring of patients at the outpatient clinic is a vital part of KT, as it may provide early diagnosis and effective management of AMR in especially high-risk KT recipients.

From the 1Department of Internal Medicine, 2Department of Nephrology, and the 3Department of General Surgery, Baskent University Faculty of Medicine, Ankara, Turkey
Acknowledgements: The authors have no sources of funding for this study and have no conflicts of interest to declare.
Corresponding author: Burak Sayin, Fevzi Cakmak, Mah. 5. Sokak, No:48,06490, Bahcelievler/Cankaya/Ankara, Turkey
Phone: +90 312 2036868(5226)
E-mail: buraksayin@hotmail.com 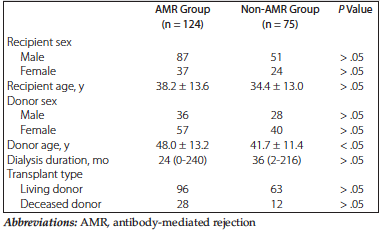