How Did the War Affect Organ Transplantation in Syria?
Bassam Saeed

Since 2011, the Syrian conflict has destroyed much of the country's infrastructure. The deteriorating humanitarian situation has involved health workers and facilities. In 2010, before the war, 385 kidney transplants were performed in Syria. This number declined to 154 in 2013 (60% less) before increasing to 251 transplants in 2018, which is still 35% less than the number of transplants performed before the war. In addition, the number of operational kidney transplant centers has decreased from 8 in 2010, distributed over 3 cities, to only 4 in 2013, all located in Damascus, which increased to 6 centers in 2019. Interestingly, with regard to type of living donor, the percentage of unrelated kidney donors has decreased by 20% for unclear reasons. Another alarming statistic is that more than 50% of kidney transplant physicians and surgeons are no longer practicing transplant medicine in their centers, either because they have left the country or because their centers had become nonoperational. Since the war, free and timely provision of immunosuppressive drugs for all patients in all provinces has been a leading challenge for health authorities and transplant patients. This difficulty has led to adverse medical consequences for patients. A project to initiate liver transplant came to a halt because of complex reasons but mainly because foreign trainers could not visit Syria. Although the autologous bone marrow transplant program had slowed until recently, it has become more active, involving both autologous and allogeneic transplants. The deceased-donor program is still not available in Syria; the war has just reinforced the many reasons that prevented the start of this program before the conflict. The commitment of transplant teams despite these large challenges continues to be extraordinary. The Syrian conflict has affected all aspects of organ transplant, paralyzing new projects and negatively affecting existing programs.

Patients with established renal failure who live in developing countries face many obstacles, including lack of access to transplant centers, quality issues, and safety issues.1 The conflict in Syria, which began in March 2011, has caused the Syrians to face daily hazards because of war-related violence, threats to health, and lack of access to health services, including organ transplant medicine. Many of the country’s health care facilities, including clinics and transplant centers that had been established by the government, have been completely demolished or have become nonoperational. The aim of this study was to highlight how the Syrian crisis has affected organ transplant in Syria.

History of Solid-Organ Transplant in Syria
The first kidney transplant in Syria was performed in 1979. Currently, kidney, bone marrow, and cornea are the only organs or tissues that can be transplanted in Syria.2 A few heart transplants were performed in the early 1990s. A deceased-donor program is still not available in Syria. The Syrian government has taken steps to initiate liver transplant. Recently, 2 liver transplants from living related donors were performed at Al-Assad University Hospital in Damascus. Kidney transplant is the main transplant activity in Syria and relies exclusively on living donors. Since the enactment of the new transplant law in 2003 that authorized recovery of organs from both deceased and unrelated donors,3 the rate of kidney transplants has remarkably increased from 7 kidney transplants per million population (pmp) in 2002 to 17 pmp in 2007.4 This rate had been maintained for the next few years, with 385 transplants (17 pmp) performed in 2010, the year that preceded the crisis.5 The above-mentioned law, called Law number 30, has been considered as a landmark in the history of organ donation and transplantation in Syria as it recognized for the first time “the concept of brain death” and permitted recovery of organs from deceased donors. It also authorized altruistic living nonrelated donations under certain conditions. As of the end of 2018, 5132 kidney transplants had been performed in Syria (Figure 1). The years that preceded the current war in Syria were marked by delays in establishing a deceased-donor program and the exclusive reliance on living donors.

The absence of growth of kidney transplant activity was multifactorial. The limited resources and small number of organized teams of transplant surgeons and nephrologists, as well as lack of public awareness, education, and motivation for organ donation, have played major roles in delaying the start of a national deceased-donor program that could increase transplant from other organs and alleviate the burden to living kidney donors. Although prohibited by law, practices have developed that have gone beyond the limits of ethical and legal acceptability; this practice of renal commerce was in fact a major hurdle in establishing a deceased-donor program because it negatively affected the reputation of organ transplant. This model of paid unrelated kidney donation, although prohibited by law, is considered to be in violation of the Istanbul Declaration.6

Effect of War on Kidney Transplant Activity
Kidney transplant is the main transplant activity in Syria and relies on living-related and unrelated donors. Unfortunately, after 8 years of war, here we are. During the 1st 3 years of war (2011-2013), the annual rate of renal transplants in Syria had gradually but steadily decreased by 60%, from 385 transplants (17 pmp) in 2010 to only 154 transplants (6 pmp) in 2013. Over the next 5 years (2014-2018), this rate has again increased to reach 251 kidney transplants in 2018 (14 pmp) for a population of 18 million (compared with a population of 23 million before the war started).1 Interestingly enough, compared with that shown in adult patients, rates of pediatric renal transplant were not affected by the war, showing a mild increase in pediatric renal transplant from 4.1 and 3.1 pmp in 2009 and 2010, respectively, to 5.6 and 4.3 pmp in 2017 and 2018, respectively.

The number of kidney transplant centers that remained in service has also diminished by 60%, from 10 centers in 3 cities (Damascus, Aleppo, and Homs) before the crisis to only 4 centers in 2013, all in Damascus. In 2019, the number has again increased to 6 centers, all in Damascus.

There are no available data with regard to the number and outcomes of patients on dialysis who were forced to leave the country during the crisis. However, only a few patients have appeared to the central pharmacy of the Ministry of Health seeking immunosuppressive drugs after being transplanted abroad.

The rate of unrelated donor kidney transplants has decreased from >70% during the years that preceded the crisis to 47% in 2013; these have increased again but remained below 60% over the past 5 years (2014-2018) (Figure 2). With regard to the practice of selling kidneys, there is no known reason that could explain the decline during the war. However, one could speculate that the potential unrelated (paid) kidney donors who were seeking remuneration in exchange for a kidney may have found better alternate ways to obtain money during the war.

The war has affected kidney transplant activity in Syria because of several other factors, especially the substantial decrease in the number of physicians and surgeons involved in kidney transplant. Currently, more than 50% of these specialists are not practicing in their centers, either because they have left the country (29%) or their centers are no longer operational (22%). The availability of immunosuppressive drugs is another major issue for both health authorities and transplant patients. Throughout Syria during the years of the crisis, there have been frequent interruptions in the timely supply of these drugs, which the government continued to provide free of charge to all patients. This has led to adverse medical consequences for patients who could not arrange an alternate source; in addition, adverse effects could be also caused by newly imported drugs with unknown safety and efficacy profiles.

Effect of Syrian War on Other Organ and Tissue Transplant Activities
By the beginning of 2011, the government of Syria was taking steps to initiate liver transplant. For this purpose, efforts had included cooperation with well-known Brazilian and Iranian liver transplant centers, where specialized teams were sent for training. However, the trainers from those countries could no longer visit Syria because of the war, and the project came to a halt. Recently, a few liver transplants have been performed from living related donors.

An autologous bone marrow transplant program started in 2008 at Tishreen Hospital in Damascus; shortly after the war started, the program was stopped for 3 years before it resumed again at a slower and irregular rate. By the end of 2018, the program has become more active than ever, as both autologous and allogeneic bone marrow transplants are performed regularly for patients from across the country.

Delaying the Start of a Deceased-Donor Program
The war reinforced all of the reasons that had prevented the start of a deceased-donor program during the prewar period. This particularly included the new transplant law of 2003 that authorized unrelated kidney transplant donations, which consequently decreased the urge or need to start a deceased-donor program. Moreover, an unrelated kidney donor program may look less costly for state and health authorities, therefore making it more feasible and “attractive,” at least in the short run from an economic point of view. Last but not the least, the interest in deceased donations was negatively affected by a systematic approach to use poor people as sources of organs.

The commitment and dedication of transplant teams who continue doing their jobs in such a difficult and challenging situation are extraordinary, and these teams deserve to receive support from the international community. When the Syrian crisis ends, the Ministry of Health must address the restoration of the infrastructure of organ transplant centers and the initiation of the long-awaited deceased-donor program. This may require necessary reforms in the judicial system and a solution for renal commerce by alleviating poverty and increasing awareness, education, and motivation for organ donation. These are difficult measures to achieve in a developing country such as Syria emerging from war.7,8

The war in Syria has severely affected patients and health services in Syria. All aspects of organ transplant have been affected, paralyzing new projects and negatively affecting existing programs.

From the Farah Association for Child with Kidney Disease in Syria, Damascus, Syria
Acknowledgements: The author declares no conflicts of interest. No funding was received for this study.
Corresponding author: Bassam Saeed, PO Box 8292, Damascus, Syria
Phone: +963 11 3340766
E-mail: bmsaeed2000@yahoo.com 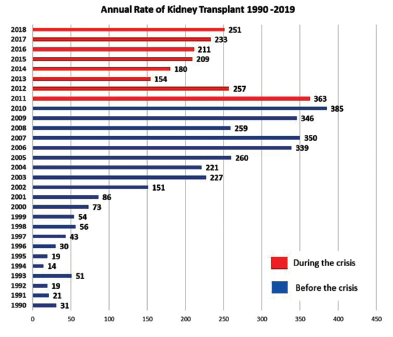 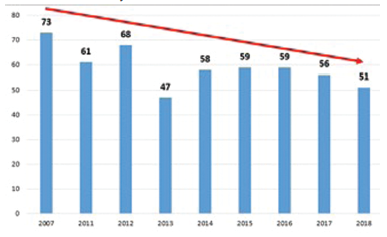 Figure 2. Unrelated Kidney Donors as a Percentage of All Living Donors Before and After the Crisis in Syria