For many hematologic and nonhematologic diseases, hematopoietic stem cell transplant (HSCT) is the main therapeutic modality and provides either cure or prolonged survival.1 The Eastern Mediterranean Blood and Marrow Transplantation (EMBMT) group from 9 countries of the World Health Organization Regional Office for the Eastern Mediterranean, including Iran, reported 3546 first HSCT for the years 2011 to 2012. Most of the reported HSCT were allogeneic (62%).2 Ramzi and colleagues described their 15-year experience (from May 1993 to October 2008) with HSCT at their center in Shiraz, Iran. A total of 423 patients underwent either allogeneic HSCT (n = 311) or autologous HSCT (n = 112) at this center.3

Cyclosporine, a calcineurin inhibitor, is an impor­tant immunosuppressive agent in the therapeutic regimen of HSCT. It is most often used for prevention of graft-versus-host disease in allogeneic HSCT. Although cyclosporine has a major role in HSCT, its use is complicated by a narrow therapeutic index and various adverse reactions, including both acute and chronic nephrotoxicity.4 Cyclosporine acute nephrotoxicity presents as increased serum creatinine, decreased glomerular filtration rate (GFR), and imbalanced electrolytes (eg, hypo- and hyperkalemia and hypomagnesemia).5 Studies have shown that nephrotoxicity in HSCT recipients is common (with the frequency up to 70%), and it has been associated with increased rates of short-term and long-term mortality.6

We considered the nephrotoxic potential of cyclosporine and the lack of data for cyclosporine nephrotoxicity in the HSCT setting, and the aim of the present study was to determine the incidence, onset time, and factors associated with the incidence of nephrotoxicity and electrolyte disturbances of cyclosporine. In addition, we assessed the usefulness of the KIM-1 kidney injury molecule as a novel biomarker of renal function and compared this with the usefulness of serum and urine creatinine measurements for detection of acute kidney injury during treatment with cyclosporine in allogeneic HSCT recipients in Iran.

Study setting and sample size
This cross-sectional observational study was performed within a 10-month period from April 2018 to February 2019 at the Bone Marrow Transplant Unit of Namazi Hospital, affiliated with the Shiraz University of Medical Sciences in Shiraz, Iran. The medical ethics committee of the university approved the study (IR.SUMS.REC.1398.088), and written informed consent was obtained from all patients.

Study population and patient selection
The following criteria were used to evaluate candidates for the study: (1) age > 15 years; (2) no documented history of acute kidney injury (defined as an increase in serum creatinine ≥ 0.3 mg/dL within 48 hours, an increase in serum creatinine by ≥ 1.5 times the baseline within the prior 7 days, or urine volume < 0.5 mL/kg/h for 6 hours)7 or chronic kidney disease (defined as creatinine clearance below 60 mL/min/1.73 m2 or documented history of regular peritoneal or hemodialysis for more than 3 months)8; (3) absence of any prominent clinical condition that may cause or aggravate renal impairment in the setting of HSCT (eg, graft-versus-host disease, hepatic sinusoidal obstruction syndrome, tumor lysis syndrome, sepsis, severe hypovolemia due to diarrhea or vomiting); (4) no documented history of treatment with cyclosporine within the past 14 days; and (5) willingness and ability to receive either oral or intravenous cyclosporine for at least 1 week.

Biochemical and serologic measurements
Serum creatinine, sodium, and urea were monitored daily until hospital discharge or death of patient, in accordance with the routine practice of the bone marrow transplant ward at Namazi Hospital. At days 0, 3, 5, 7, 10, and 14 of cyclosporine treatment, spot urine samples were collected for determination of sodium, urea, creatinine, and KIM-1. Urine samples were stored at -80 °C in a freezer (New Brunswick Scientific) until completion of the sampling procedure for the cohort. An autoanalyzer (Shanghai Xunda Medical Instrument Co.) was used for measurement of creatinine, sodium, and urea in both serum and urine. Urine levels of KIM-1 were determined by the double-sandwich enzyme-linked immunosorbent assay technique (Bioassay Technology Laboratory, Shanghai Korain Biotech Co.).

Study endpoints
Cyclosporine nephrotoxicity was defined as increase in serum creatinine level to 2-fold or greater from baseline.6 Either fractional excretion of sodium > 2% or fractional excretion of urea > 50% (in cases of loop diuretic treatment) was considered an indicator for acute tubular necrosis (ATN).9 Apart from the above definition for cyclosporine nephrotoxicity, acute kidney injury in the cohort was also determined by the Risk, Injury, Failure, Loss of Kidney Function, and End-Stage Kidney Disease (RIFLE) criteria.10 Baseline GFR was calculated by the abbreviated Modification of Diet in Renal Disease formula.

We recorded all interventions for the management of cyclosporine nephrotoxicity, including daily dose reduction, alternate day dosing, discontinuance of the agent, dialysis treatment, and change of medication.

Statistical analyses
We performed all statistical analyses with the Statistical Package for the Social Sciences (SPSS, version 20). Continuous data were expressed as either means ± SD or as medians with interquartile range. Categorical variables were reported as percentages. Chi-square or the Fisher exact test was used to evaluate possible associations among categorical variables. Continuous variables were analyzed by either an independent t test or the Mann-Whitney U test. We used the univariate and multivariate logistic regression analyses with odds ratio (OR) and 95% CI to determine associated factors of cyclosporine nephrotoxicity. In univariate analysis, we assessed the possible association with cyclosporine nephrotoxicity (as dependent variable) of each independent variable, including age, sex, body mass index (BMI, calculated as weight in kilograms divided by height in meters squared), baseline GFR value, daily dose of oral and intravenous cyclosporine, conditioning regimen, coadministration of aminoglycosides, amphotericin B, vancomycin, and furosemide. Variables with P < .05 were thereafter considered together for multivariate logistic regression analysis. We used 1-way analysis of variance with repeated measures for comparison of the mean values of serum creatinine, urine creatinine, and urine KIM-1 at days 0, 3, 5, 7, 10, and 14 of treatment within and between patients with and without cyclosporine nephrotoxicity. We used the receiver operating characteristic curves of sensitivity and specificity to compare the accuracy for detection of cyclosporine nephrotoxicity by the above markers on treatment days 0, 3, 5, 7, and 10, and relevant data were expressed in terms of area under the curve (AUC) and 95% CI. Statistical significance in all analyses was defined as P < .05.

During the study period, there were 48 patients in the primary screen. Among them, 6 individuals were younger than 15 years old, and these patients were excluded. Therefore, 42 patients were finally recruited into the study.

More than one-half of the cohort were men (54.8%). The mean age of the study population was 32.29 ± 9.37 years. The 3 most common underlying hematologic-oncologic diseases were acute myeloid leukemia (38.1%), acute lymphoid leukemia (31%), and aplastic anemia (7.1%). The mean baseline GFR value was 122.05 ± 33.08 mL/min. Conditioning regimens of the study population were busulfan + cyclophosphamide (n = 37), antithymocyte globulin + cyclophosphamide (n = 4), and busulfan + fludarabine (n = 1). Amphotericin B, vancomycin, and furosemide were administered to 39, 20, and 4 patients, respectively. No patients received aminoglycoside or acyclovir. The mean daily dose of oral cyclosporine was 241.96 ± 57.72 mg, and the mean daily dose of intravenous cyclosporine was 168.81 ± 30.06 mg.

Hypokalemia was detected in more than three-fourths (76.2%) of the study population and hypomagnesemia in more than one-half (52.4%). In addition, no patient experienced a hyperkalemic episode. Electrolyte disorders are common adverse effects of cyclosporine, mostly reported from solid-organ transplant settings.5 Data on this topic in HSCT patients are rare. Caliskan and colleagues reported 4 cases of hyperkalemia due to cyclosporine in allogenic HSCT recipients.17 Hyperkalemia has been also reported in 2 patients with advanced renal cell carcinoma who underwent HSCT during the course of cyclosporine treatment.18 In an observational study of 36 allogenic HSCT patients who received either cyclosporine or tacrolimus, Aisa and colleagues reported that all patients experienced at least 1 episode of hypomagnesemia within the first 4 weeks after transplant.19 In the present study, we found no cases of hyperkalemia, and this is a novel finding that has not previously been reported for HSCT. We coadministered amphotericin B (92.86% of patients), vancomycin (47.6%), and furosemide (9.52%), and this may partially explain this novel result. In this regard, Karimzadeh and colleagues reported that the frequency of hypokalemia in their hematology-oncology and bone marrow transplant centers was 45% in patients treated with amphotericin B and 40.38% in patients treated with vancomycin.20,21

Results of receiver operating characteristic curve analyses demonstrated that urine KIM-1 had no superiority over serum or urine creatinine in detection of cyclosporine nephrotoxicity. In addition, repeated measures analyses revealed that the changing pattern of urine KIM-1 during 2 weeks of cyclosporine treatment did not differ significantly between patients with and without nephrotoxicity. A number of experimental studies have assessed urine KIM-1 as a marker of kidney function in the setting of cyclosporine nephrotoxicity.27-32 For example, in a rat model of cyclosporine nephrotoxicity, urine KIM-1 increased both in the early (7 days) and late phases (21 days) of nephrotoxicity.29 Sanchez-Pozos and colleagues also demonstrated that cyclosporine (15 mg/kg/day subcutaneously for 15 days) was associated with tubular apoptosis and tubulo­interstitial fibrosis along with an increase in the expression of KIM-1 in the kidney tissue.30 Despite the promising results of animal investigations, there are few clinical studies on KIM-1 as a marker of kidney function in the setting of drug nephrotoxicity, and the results from those studies are inconclusive. Two studies in pediatric patients showed that urine KIM-1 was superior to urine N-acetyl-D-glucosaminidase, neutrophil gelatinase-associated lipocalin, and interleukin-18 for detection of cisplatin and gentamicin nephrotoxicity.33,34 In the study by Vaidya and colleagues, 2 patients with malignant mesothelioma developed postoperative acute kidney injury as a result of intraoperative local cisplatin treatment.35 Both preoperative and 6-hour postoperative urine samples were negative for KIM-1. However, 24 hours after surgery, peak urinary KIM-1 levels (800 pg/mL) were identified.35 Positive findings have been also reported by Shinke and colleagues in lung cancer patients who received cisplatin.36 In contrast to these studies, 2 other investigations by Karimzadeh and colleagues failed to show any superiority of urine KIM-1 over either serum or urine creatinine measurements for detection of amphotericin B and vancomycin nephrotoxicity.37,38 The negative results in our present study can be attributed to small sample size, limited measurements of urine KIM-1, and the use of certain serum creatinine cut points rather than the use of a more standardized method for determination of nephrotoxicity. Also, it is noteworthy that none of our patients developed ATN during the course of cyclosporine treatment. That is, the fact that there was no significant difference in the level of urine KIM-1 between patients with and without cyclosporine nephrotoxicity may be because of the absence of ATN, as KIM-1 generally is secreted and released from the proximal tubule cells in the case of ATN.39 Interestingly, Saburi and colleagues reported that, among 50 allogenic HSCT patients treated with cyclosporine, not one experienced a significant increase in the fractional excretion of sodium within 4 weeks after transplant. The authors concluded that the effect of cyclosporine on fractional excretion of sodium is minimal.40

The strength of our survey was shown by our consideration of the different aspects of cyclosporine nephrotoxicity while simultaneously including frequency, pattern (both glomerular and tubular), onset time, and risk factors; the clinical outcome in the HSCT setting; and, for the first time in humans, the comparison of urine KIM-1 versus classic markers of renal function with regard to detection of cyclosporine nephrotoxicity. In contrast, the major drawbacks of this study were the relatively small sample size (mostly due to exclusionary criteria), the limited number of urine KIM-1 measurements for each patient (mostly due to limits on financial resources), the use of certain serum creatinine cut points rather than a standardized method (such as inulin as an exogenous agent, or kidney biopsy) to prove nephrotoxicity (for which we were limited by both practical and financial restrictions), and our inability to exclude all factors that may be involved in kidney injury in the HSCT setting. However, with regard to the first limitation (small sample size), the calculated statistical power of our study is 84.33%, which indicates that our study was not underpowered. With regard to the last limitation (factors for HSCT kidney injury), although our patients received a number of nephrotoxic agents (amphotericin B, vancomycin, furosemide), these agents were comparable between patients with and without nephrotoxicity. 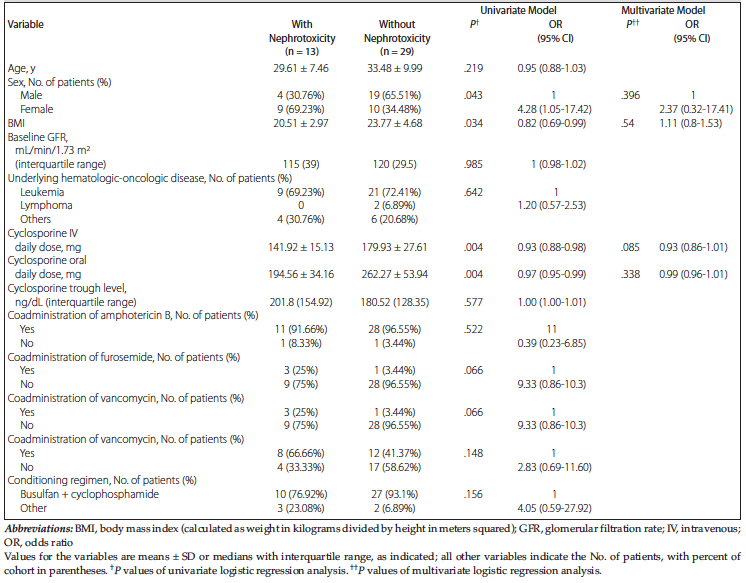 Table 1. Comparison of Different Demographic, Clinical, and Paraclinical Characteristics of the Study Population (n = 42) Between Patients With and Without Cyclosporine Nephrotoxicity 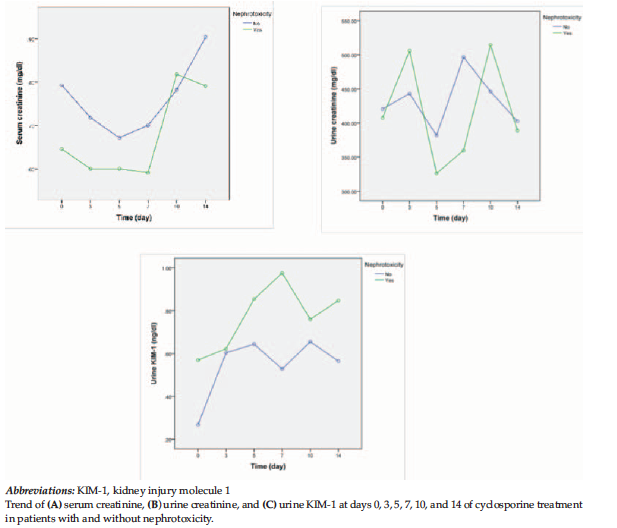 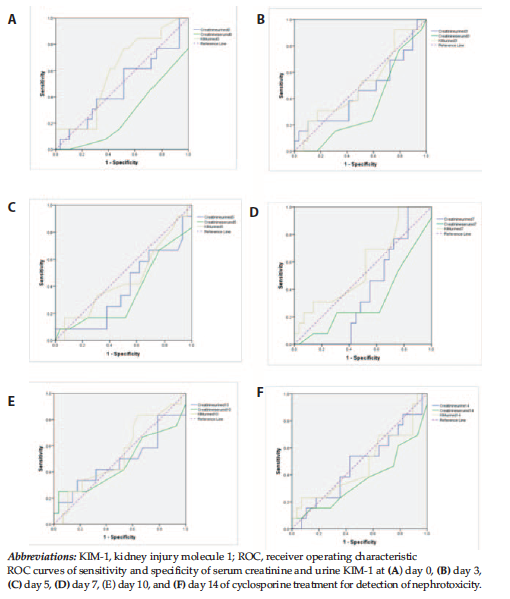