Conclusions: Improved anastomosis and recon­struc­tion techniques have allowed the safe transplant of multiple renal vessel grafts that may remain functional for many years.

Kidney transplant is currently the best treatment for end-stage renal failure. Some studies have indicated that grafts with multiple renal vessels (MRV) have a higher risk of vascular and urological complications during and after transplant.1,2 Recently, with improvements in surgical materials and anastomosis techniques, complications have been reduced and graft life has been extended.3 Here, we aimed to evaluate cases from our center of kidney transplants with MRV grafts, with a focus on subsequent graft survival, as well as the vascular and urological complications in the postoperative period.

Between November 1975 and July 2020, there were 3316 renal transplant procedures performed in our center. Of these, 2221 (67%) were male recipients, and 1095 (33%) were female recipients, with mean age of 32.03 years. With regard to kidney grafts, 716 (22.8%) were from deceased donors, and 2420 (77.2%) were from living donors. According to our criteria, donor candidates must be relatives (up to 4th degree) or the spouse of the recipient. Also, we perform paired kidney exchange transplant for recipients who are sensitized to their donors or have ABO-incompatible donors.

Grafts with 2 arteries
There were 145 grafts with 2 renal arteries, and these were transplanted as follows.

Multiple vein grafts
There were 169 renal grafts with multiple veins.

Of these, 142 grafts had 2 veins, and 27 grafts had 3 veins. These multiple renal vein grafts were transplanted as follows.

Grafts with 2 veins
There were 31 grafts with 2 renal veins. Both veins were end-to-side anastomosed to the external iliac vein (EIV) as a single ostium; otherwise, the 2 renal veins were sutured individually (Figures 2 and 3). The second veins of the other grafts were ligated.

For 12 grafts, the first 2 larger veins were end-to-side anastomosed to the EIV, and the third vein was ligated.

In 15 grafts, the second and third veins were less than 5 mm in diameter and were safely ligated.

In 1 graft, the first vein was end-to-side anasto­mosed to the EIV, and the ends of the second and third veins were anastomosed to the EIV as a single ostium.

Posttransplant procedures
After transplant, patients received standard triple immunosuppressive therapy (0.1 mg/kg tacrolimus or 5 mg/kg cyclosporine, 1.5 mg/kg prednisolone, and either 2 doses of 1 g mycophenolate mofetil or 2 doses of 720 mg mycophenolate sodium). Graft function was evaluated using daily clinical data and serum creatinine levels as well as renal Doppler ultrasonography performed on posttransplant days 3 and 7. In the period after discharge, graft function was evaluated at follow-up visits by measurement of serum creatinine levels and renal Doppler ultrasonography scans (Figure 7). Follow-up visits occurred once a week in the first 2 weeks, then once every 2 weeks for a 1-month period, once a month over the next 6 months, once every 3 months in the following year, and finally once every 6 months.

Statistical analyses
The Fisher exact test, the chi-square test, and Kaplan-Meier plots were used for evaluations and comparisons of data. We used IBM SPSS software for Windows for all calculations.

In our evaluation of MRV grafts, we noted in the early postoperative period that graft nephrectomy was performed in 1 patient to treat hyperacute rejection and in 2 patients to treat recurrent massive bleedings. In the early period after transplant, 4 patients required surgical exploration to resolve bleeding episodes. Of the patients who underwent surgical exploration, 2 had oozing-type bleeding, 1 had bleeding from the EIA, and 1 had bleeding from the renal venous anastomosis. All bleeding episodes were stopped with surgical sutures. Hematoma developed in 2 patients; however, in both patients, the hematoma resorbed during follow-up without additional procedures. Doppler ultrasonography performed early in the postoperative period showed polar arterial thrombosis in 6 patients. Because graft functions were not affected, patients required no further treatment. Nine patients developed a lymphocele at the surgical site, which we treated via catheter drainage. Urinary leakage occurred in 1 patient. Renal artery stenosis developed in 3 patients, and this required balloon angioplasty. Also, stent placement was required for 1 patient to treat recurrent angioplasties.

The ideal treatment method for end-stage renal failure is renal transplant. Ever since the first renal transplant, outcomes have dramatically improved with the discovery of organ perfusion and pre­servation solutions, the application of new surgical techniques, and the development of combined immuno­suppressive regimens and antimicrobial agents.7,8

The presence of MRV, which was previously contraindicated because of the associated prolonged ischemia time and vascular anastomotic leaks, is no longer an indicator that would prevent transplant. The option for proceeding with transplant in cases with MRV has therefore increased the number of organs available for patients on wait lists. The rate of occurrence of multiple renal arteries in various autopsy series was found to be 23% and the occurrence rate of multiple veins was even less.9,10 In our series presented here, the rate of occurrence of multiple renal arteries was 5%.

We found no differences between MRV and SRV grafts in terms of long-term graft survival and function; therefore, we suggest that transplant of MRV grafts can be safely performed. However, some studies have found that MRV grafts, especially in cases of multiple renal arteries, could result in ATN because of prolonged ischemia time and surgery time.11,12 In our study, no significant differences were detected between SRV and MRV grafts in terms of the effects of ischemia time and anastomosis surgery time on graft survival and function.

Releasing the vascular clamps after main renal artery anastomosis prevents the unnecessary extension of ischemia time during the anastomosis of the polar arteries and decreases the risk of ATN.14 In our center, we use this method during transplant of multiple renal artery grafts. In deceased donors, multiple renal arteries can be removed by means of the Carrel aortic patch technique, in the form of a single opening.5 This allows for the anastomosis to be performed as a single opening, thus avoiding com­plications that may be caused by prolonged ischemia and anastomosis time. In our center, we also prefer the Carrel aortic patch method in MRV grafts from deceased donors. Another option is to join at back-table walls of 2 renal arteries as side-to-side anastomosis and create a single opening before transplant. However, this method is not widely preferred because it can result in thrombosis in both arteries.15 If the main renal artery or polar arteries are short or if there is iatrogenic injury to an artery, then polytetrafluoroethylene grafts can be used with confidence.13 In our case series, we did not need to use polytetrafluoroethylene grafts. If a polar artery has a very narrow diameter that is not suitable for anastomosis, then it can be ligated if the area it perfuses is insignificant.15 In our case series, there were no complications in 7 patients who had their polar arteries ligated.

Renal artery stenosis is a late complication that disrupts posttransplant graft function and can cause de novo hypertension in the patient. Interventional radiological methods play an important role in the diagnosis and treatment of patients with this complication.16 In our case series, after diagnoses were confirmed by angiography in 3 patients who had renal artery stenosis detected via Doppler ultrasonography during routine follow-up, treatments were suc­cessfully performed with interventional radiological methods. Surgical revision was not required.

The literature suggests that, if the graft has multiple renal veins and the smaller vein diameter is less than 5 mm, then the smaller vein can be ligated.10,17 This did not pose a risk. But if the all veins are the same caliber, the veins must be implanted as a single ostium or individually. Similar to the examples in the literature, we ligated 153 accessory veins of 126 grafts because the accessory vein diameters were less than 5 mm. In the postoperative period, we did not see any complication due to ligation of accessory veins.

From the Department of General Surgery, Baskent University, Ankara, Turkey
Acknowledgements: The authors have not received any funding or grants in support of the presented research or for the preparation of this work and have no potential declarations of interest.
Corresponding author: Mehmet Haberal, Baskent University, Department of General Surgery, Yukarı Bahçelievler, Mareşal Fevzi Çakmak Sok. No: 45, 06490 Çankaya/Ankara
E-mail: rectorate@baskent.edu.tr 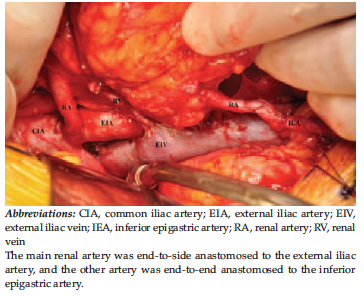 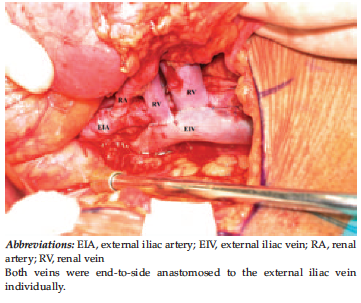 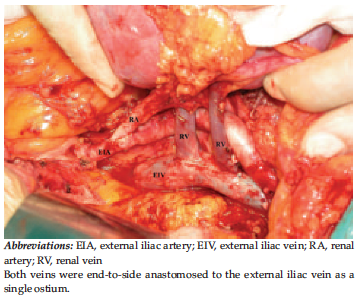 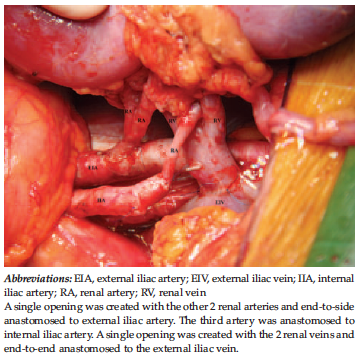 Figure 4. Graft With 3 Arteries and 2 Veins 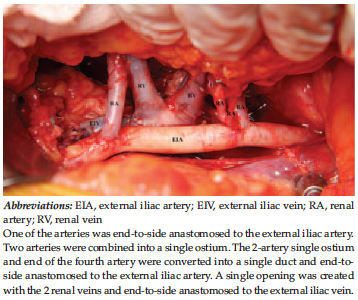 Figure 5. Graft With 4 Arteries and 2 Veins 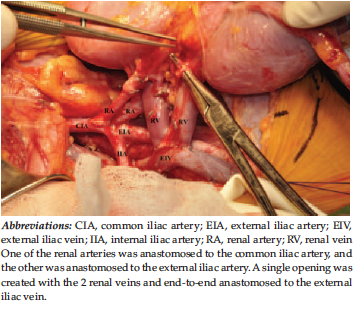 Figure 6. Graft With 2 Arteries and 2 Veins 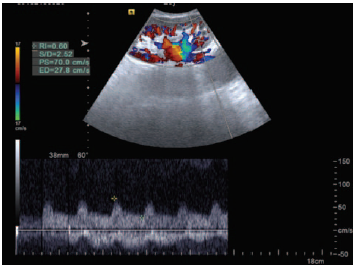 Figure 7. Doppler Image and Spectral Waveform of the Main Renal Artery in a Transplanted Kidney With 3 Arteries 2 Years After Transplant

Table 1. Arteries and Veins According to Number of Renal Vessels 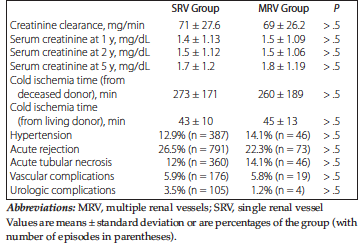