Pancreatic neuroendocrine tumors (pNETs) are one subgroup of gastroenteropancreatic neuroendocrine tumors. These are rare neoplasms and are usually slow growing. Pancreatic neuroendocrine tumors are categorized into functional and nonfunctional tumors, which are characterized by their clinical manifestations. Gastrinomas and insulinomas are the most common functional pNETs. These tumors occur with an incidence of 1 to 1.5 per 100,000/year.1 Approximately 87% of insulinomas are benign2; however, liver metastasis is a sign of malignancy that can be found in approximately 10% of insulinomas.2,3 The first orthotopic liver transplant (LT) for liver metastases associated with endocrine tumors was first reported in 1989.4 After that, LT for unresectable pNETs with liver metastases has been described in various reports.4-11 Although several criteria have been proposed, the indication and criteria for LT in those with pNETs are still unclear.12 In addition, reports on outcomes of LT for metastatic insulinoma have been sporadic and generally discuss neu­roendocrine tumors.4-11 Complex pancreatic resection has been performed prior to, in combination with, and after LT for pNETs. However, reports on the feasibility of pancreas resection with LT are limited.7 We herein report on a patient who survived 13 years following distal pancreatectomy in combination with living-donor liver transplant (LDLT) for a hepatic metastatic insulinoma that was treated with chemoembolization.

In the gastrointestinal department of the previous institution, she had been treated for hepatic metas­tasis with zinostatin stimalamer-transcatheter arterial embolization (SMANCS-TAE) 2 times in a 1-month interval.13 After transcatheter arterial embolization (TAE), the patient started to receive a somatostatin analogue for maintenance therapy. She showed gradual deterioration of liver function following the second SMANCS-TAE.

Magnetic resonance imaging showed cystic lesions suggesting biloma; however, metastasis could not be ruled out (Figure 2). She underwent endoscopic variceal ligation for bleeding prophylaxis caused by esophageal varices 3.1 years following SMANCS-TAE. The laboratory evaluation indicated liver failure with an increased total bilirubin level of 4.1 mg/dL, direct bilirubin level of 2.9 mg/dL, and platelet count of 63 000/μL. Liver transplant was indicated for hepatic failure, and the patient was referred to the department of transplantation at the Kumamoto University Hospital.

The preoperative pathological diagnosis regard­ing the hepatic cystic tumors was not available. However, there was no extrahepatic lesion identified by imaging studies except for the original pancreatic tumor. Although the hepatic nodules had malignant potential, LT was considered as the most curative procedure if combined with resection of the original tumor.

Deceased-donor LT registration for special indications was not possible in Japan because of the limited number of donations overall. However, the patient eventually underwent LDLT and distal pancreatectomy with splenectomy 3.5 years from the time of SMANCS-TAE. The donor was the patient’s mother, who was 57 years old and had an identical blood type. The graft weight of the donated left lobe was 420 g (graft-recipient weight ratio, 1.0%). The recipient’s portal trunk showing evidence of thrombosis was resected and replaced with a segment of splenic vein harvested from the resected distal pancreas because there was no invasion to this area.

Although the explanted native liver showed cirrhosis, coagulation necrosis, abscess formation, and intrahepatic lithiasis, it did not have malignant insulinoma cells according to the meticulous pathological examination.

The resected pancreas included a tumor 7.0 × 9.0 mm at the pancreatic body, as shown in the pretransplant enhanced computed tomography (Figure 1). The tumor was pathologically diagnosed as a neuroendocrine tumor and stained positive for insulin and chromogranin A. Histological features were compatible with an insulinoma (Figure 3). No metastatic lesions were seen in the peripancreatic tissue, lymph nodes, or splenic hilar lymph nodes. The mitotic rate was less than 2 per 10 high-power fields, and the Ki-67 index of the tumor was less than 2%. Therefore, the histological grade was G1 according to the World Health Organization 2017 neuroendocrine tumor grading system.14

The patient was prescribed standard immunosup­pression with tacrolimus and corticosteroids; however, she developed a cytomegalovirus infection on postoperative day 29, which was successfully treated by intravenous ganciclovir. Octreotide was discontinued after the LT, and she was discharged on postoperative day 61. She has been followed up after discharge at the Kumamoto University Hospital and our institution and has been doing well for 13 years without any signs of recurrence.

The patient in our report was treated with TAE. Although the explanted liver suggested that the therapeutic effect of TAE was actually sufficient, the treatment induced liver failure. Therefore, LT was necessary in this patient. If conservative treatment could control hypoglycemia, then it would be one of the options. However, as shown in this patient, deterioration in quality of life and illness may progress during conservative treatment. Radical surgical treatment should not be ruled out throughout the treatment process. Although TAE can be regarded as one type of palliative treatment, it should be avoided if subsequent liver failure is expected. In that case, primary LT with resection of the original tumor is the main option for a cure. A salvage LT might be another option as in our case.

Although the patient in our report has been doing well without any signs of recurrence 13 years after LDLT, Ortiz and colleagues reported a patient who had recurrence of a carcinoid tumor 16 years after LT.11 Therefore, the patient still requires careful follow-up.

In conclusion, this example of a patient who demonstrated long-term survival suggests that we should choose primary LT with resection of the original tumor as a treatment method compared with TAE that can local control for the insulinoma patients with multiple liver metastasis from the first. 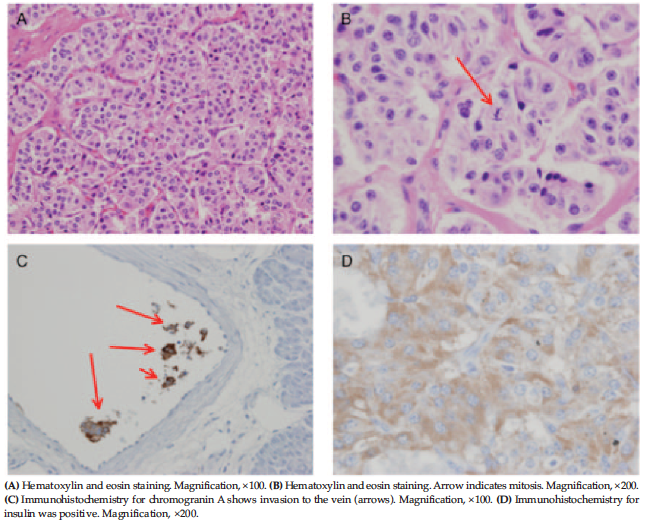